Rise of the trident – Maserati Tipo 26

Rise of the trident. Clockwise, from below: the oldest working Maserati is still in perfectly patinated state; strong engine but poor steering design; 26M was trucked all the way to Brooklands for 1930 500 Miles, but wouldn’t start. Photography James Mann/Lat. Maserati’s competition pedigree was founded on a glorious straight-eight, says Mick Walsh as he investigates the super-fast but fragile Tipo 26.

The earliest Maseratis date from the swansong era of the two-seater Grand Prix racer, which, as rivals Bugatti, Mercedes- Benz and Alfa Romeo exploited, could easily be converted into sports cars for major events such as the Mille Miglia. While making spark-plugs for their bread and butter during tough times in Italy, the Maserati family’s incurable desire to win resulted in a small, ultra-determined independent works team. The founding brothers – Alfieri, Bindo, Ettore and Ernesto, affectionately known as il Fratelli – quickly designed a line of rapid supercharged eight-cylinder twin-cam racers.

Developed from a Diatto, the original 120bhp 1 1/2 -litre Maserati Tipo 26 was named after the year of its arrival, and the number ran through to 1932. Production over the first four years was modest – at about five cars annually plus spares – so it’s hardly surprising that survivors such as the one featured here are exceptionally rare. Part-funded by selling cars to wealthy Italian enthusiasts, the Bologna team regularly troubled the big boys. Initial success for these lean-looking machines was limited to races and hillclimbs, but Maseratis were the talk of events even when they didn’t win including the fledgling Mille Miglia, where they set the pace but consistently broke. Before his car retired, Mario Umberto ‘Baconin’ Borzacchini clocked a blistering time from Brescia to Rome of 6 hours 23 mins in a 2 6MM in ’29, more than three minutes ahead of eventual winner Giuseppe Campari’s Alfa 6C-1750. Maserati really arrived on the international scene at the 1930 Monza GP when Achille Varzi’s 26M – powered by a new 2%-litre engine – headed a dominant 1-2-3 afterthe Alfa P2s failed. 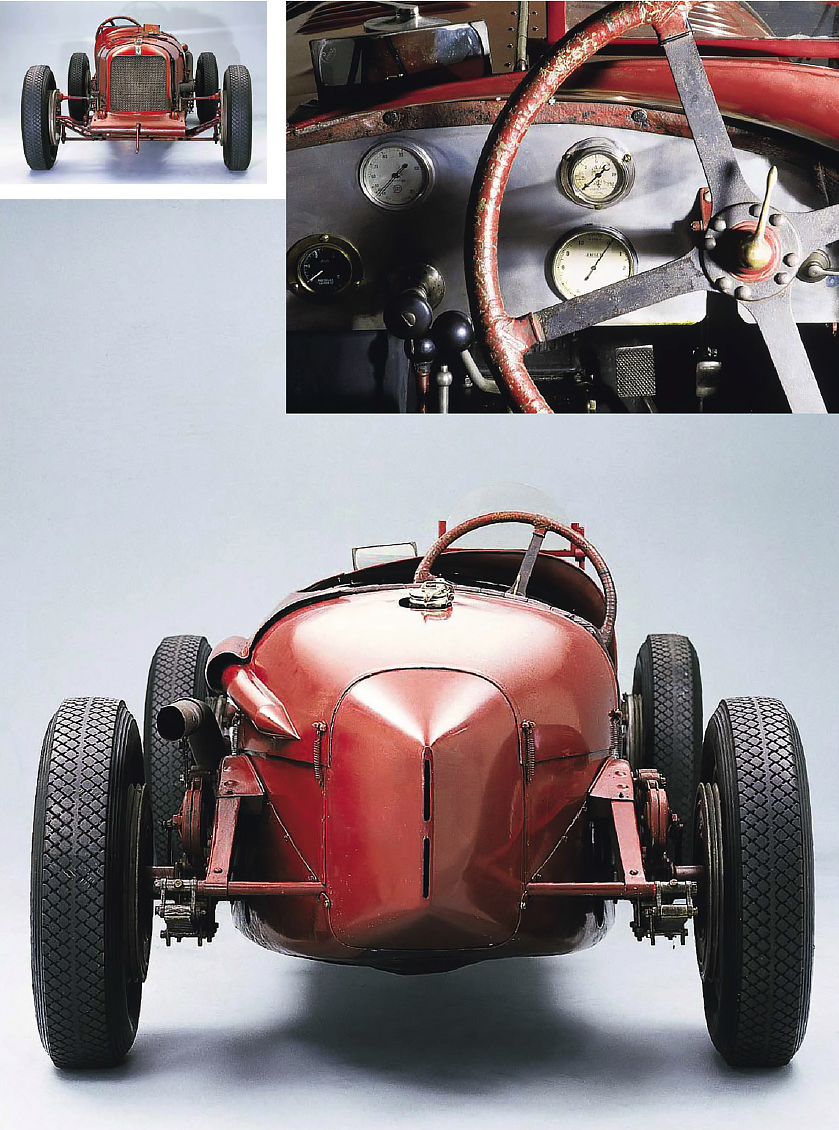 In contrast to its rivals, the beautifully made Tipo 26 – with its steeply inclined radiator, double-dropped chassis and shapely pointed tail had a lithe, purposeful presence. ‘If it looks right, it is right’ certainly applies to this vintage Latin gem. Under the low bonnet was a fabulous straight-eight featuring a five-bearing crankshaft (both plain and roller), with front geartrain driving the overhead camshafts and a Roots-type blower. As the Tipo 26’s capacity grew, so Maserati upgraded the unit with the latest Elektron and other light alloys sourced via useful contacts in the aero-engine industry. Isotta-Fraschini also did most of Maserati’s machining, while rumour has it that the body frames were made by a fuselage specialist next door in Bologna. Even before Vittorio Jano’s sensational Alfa Romeo Tipo В monoposto arrived in ’32, the speedily developed Tipo 26 models were a match for anyone.

Few have more experience with pre-war Masers than Suffolk-based restorer Sean Danaher, who had 11 through his workshop last year. His highlights include two Mille Miglias with the great American enthusiast Bob Sutherland in the road-equipped 1932 8C-3000 ‘3001’, and a Stateside rally in the ex-Whitney Straight 26M. “With all of the Ramponi tweaks including a preselector gearbox, the 8C was fantastic,” he enthuses. “I did 250 miles with no trouble in a day with my partner Laura in the passenger seat. That would be my favourite from the rare survivors, but the Straight car comes a close second.” Danaher has worked on an amazing range of exotics over the years, starting with the 8CM that his father restored, and he rates the fearsome 16-cylinder V4 as the fastest pre-war car that he’s driven. With two Tipo 26 engines on a common crankcase, this 4-litre 280bhp 1929 chassis would leave long lines of rubber in every gear during test runs without its Zagato body fitted.

“The Maserati straight-eight is one of the most exciting engines of the period, with massive mid-range pull,” he explains. “It gives about 185bhp, with a rough patch around 2000rpm – just like a Bugatti – but it’s really smooth at high revs. The big single-choke Weber carburettor has less precision than Alfa’s twin-choke Memini, yet it still gives good performance. We’ve had 230bhp on methanol, though you mustn’t compare them to the hot-rod Alfa 8Cs produced today. With the direct blower drive, a misfire and a clumsy driver, it’ll shear the supercharger spline. Yet, with good fuel pressure and the right plugs, we’ve had few break over the past 20 years.

“The early versions were nicely made, with a conventional chassis. I prefer the handling to a Bugatti, which, with its higher centre of gravity, feels very hoppy. The 26M’s bias is slightly to oversteer but it is progressive. Some cars had the frames boxed, although this induced the dreaded tramp and the extra weight also affected the steering. The gearbox is a beefy design, but the change can be improved with later clutches and fewer plates. The cable brakes on the early cars are in line with Bugatti, but they progressed with bigger drums to match the larger engines.” Danaher is defensive about the criticisms of heavy steering, though, especially compared to Alfas: “It’s certainly not super-light and the cars vary so much, but it’s no worse than a Bugatti Type 51. The secret is getting the set-up right.”

C&SC columnist Alain de Cadenet is another ardent fan: “I’ve always been an Alfa 8C man, but an interest in ‘Tim’ Birkin turned me on to vintage Maseratis. I remember following Cameron Millar’s 8C-3000 across Norfolk to Blakeney, and thinking ‘what a stunning car’. Dan Margulies – one of the first and most respected Queen’s Gate Mews dealers – was an old friend and, whenever you sat down with him for lunch or dinner, the subject would turn to Maseratis.” When de Cadenet chases down a car he searches out the best, and in the ’80s he acquired one of the finest 26Ms – chassis 2514 from the

Doune Collection. “I bought it from the Earl of Moray, who had some wonderful kit,” he says. “The Maserati was sold new to Berlin-based Ernst Kotte in 1931. It was a beautiful tool room machine, built with great pride in a small race shop. The Maserati brothers only made other cars to sell to keep their team going.”

Undeterred by the marque’s reputation for unreliability, de Cadenet was the first to enter a 26M in the Mille Miglia rerun: “I did it partly because everyone said the car would never make it. The main failing was the steering, which was as heavy as hell. The Alfa Monza has a bigger steering box and is better braced while the Maserati design is too small. I used to back off the caster by taking out the wedges on the front axle and springs. Keeping the car stable on long, fast straights such as at Monza was the original goal, but I wanted it to slide more. We also fitted

Keeping it stable on straights wasthe original goal, but I wanted itto slide.

18in tyres, which lowered the centre of gravity and lightened the steering. You still need beefy arms to drive it, and I started doing lots of press- ups before the Mille Miglia. It was hard work-you also had to start it on a crank – although you really felt good at the end of the day.”

He had problems with the supercharger drive as well, which “would shear like a carrot” when the blower tried to reverse during a misfire: “So I took a lesson out of John Wyer’s book when he switched to thinner, better-quality steel to sort the ZF ’box in the GT40.1 was helping Graham Hill’s GP team, which was based near me in the next mews and, through them, sourced the same material as the Shadow’s driveshafts.

“The transmission was awkward,” he adds. “Maserati had used big detent springs to stop it jumping out of gear and, as the engine size increased, they just fitted larger ones rather than redesign it. That must have been a pain in a long race, and it’s easy to see why Straight switched to a preselector. The chassis was basically the same right through to the 8CM, as Nuvolari found in ’33. It was so whippy by then he had it boxed in.” De Cad was impressed by the details, though: “It was a super thing. Everything was numbered with a little stamp, and even the badge was made of German silver. When I opened up the seat I discovered hourglass-type springs and superb leather. The brothers lived for racing and it was reflected in the quality of their cars. Today telemetry quickly focuses on a fault, but you just drove around the problem in the ’20s.”

The example featured here is a 1928 26B that evolved into an 8C-2800, which was typical practice – particularly for customer cars. Nothing was wasted and frames were often over-stamped with a later series number. Chassis 33/2515 is the oldest-known working Maserati, and is pipped for age only by the Tipo 26 in Turin’s Museo Nazionale dell’Automobile. First run as a works car in ’28, it was sold during one of Maserati’s many financial dramas to the wealthy Marquis de Sterlich, who competed during 1928-’29 with works support starting from the Targa Florio. For 1930, the car was refreshed with a 2%-litre engine for Luigi Arcangeli and raced extensively at high-profile events including Monaco and Monza, where he finished an impressive second. 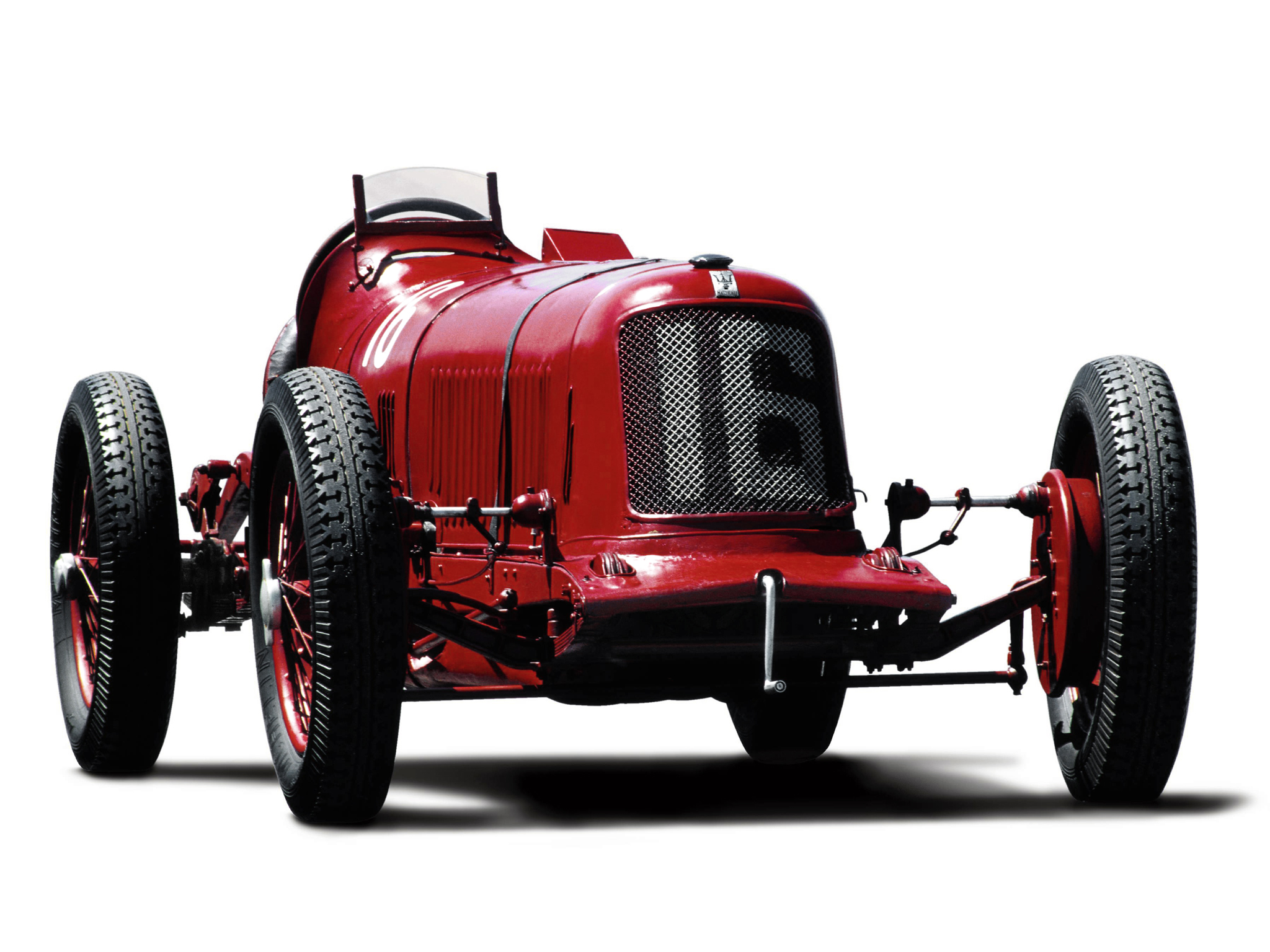 When Rene Dreyfus was signed to join lead driver Luigi Fagioli, his contract promised a new car, but – again short of funds – Maserati took the old 26B and restamped it as 2515. “The numbers were discovered during the rebuild and, when I met Dreyfus in the ’80s, I told him that he was racing an uprated old dog of a chassis,” jokes de Cad. “He never knew, but Maserati was so short of money that it had no option.”

The French ace campaigned the car during the 1931 and ’32 seasons, with modifications including a 2.8-litre motor fitted for the ’31 Italian GP at Monza where he came sixth. A class win at La Turbie hillclimb – plus seconds at the Marseille and Nimes GPs the following year – added to its colourful track record. The Tipo 26 subsequently raced in South Africa and, when war broke out, was hidden in a cave in Algeria and didn’t emerge until 1945. Once fettled, the time warp machine was road-registered by the Royal Automobile Club Marocain the following year and eventually tracked down in a French aircraft hangar by an American collector.

Later restored in the UK with fine attention to preservation, but never seen until auctioned by Christie’s at Pebble Beach in 2001, chassis 33/2515 is now part of the Italian car collection of New Yorker Lawrence Auriana where it keeps the awesome V4 company. Hopefully they will both be out at this year’s events to toast Maserati’s formative beginnings in Bologna.