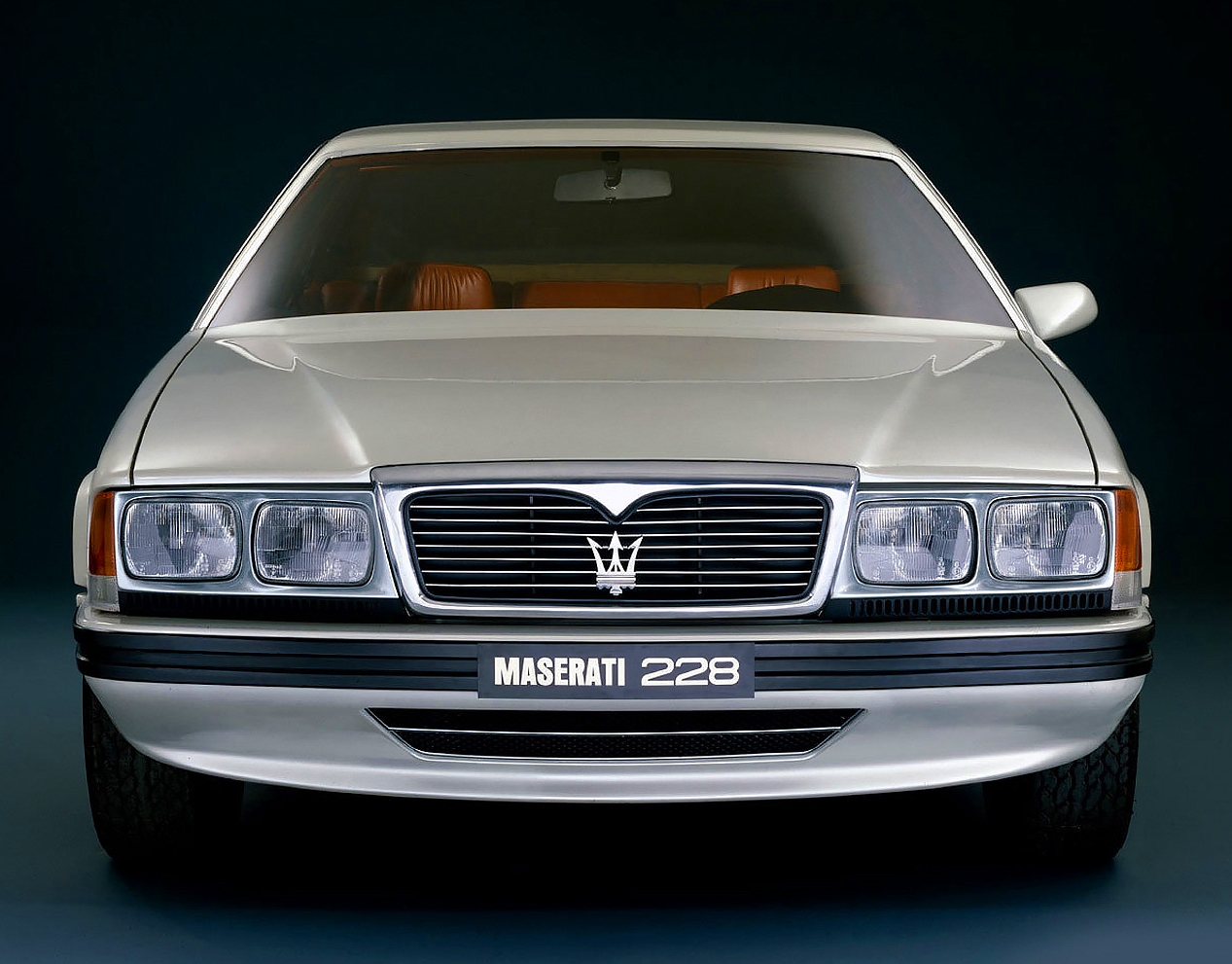 Sub-£10k masers. The marque’s up-and-down history is good news for bargain-hunters, says Martin Buckley, as expert Andy Heywood gives essential advice for buyers on a budget. The concept of the ‘cheap’ Maserati is difficult to pin down these days, the main reason being that there is much more collector interest in the brand now that it makes credible modern cars. This new respectability – and visibility – has spurred interest in past glories, sending values of the cars of the 1950s and ’60s, and to a certain extent those of the ’70s, stratospheric. Thus Mistrals, Ghiblis and the like are out of reach to even the ordinarily wealthy.

It would be wrong to claim that the vacuum has been filled by ’80s cars, but even some species of the previously toxic Biturbo generation are now beyond our notional budget – if you can find one that’s still alive. Which leaves us with a sprinkling of Quattroportes and the 3200/4200. For the brave, they start at just £6000…

Two-door coupes (here a Maserati 228) start from just £5k for good, usable cars. A nice Ghibli (below left) and Spyder (below right) can fetch £15k-plus.

The hurriedly designed Biturbo was a new generation of middle-class Maserati, conceived by Mr de Tomaso and built mostly in his Innocenti plant rather than in Modena. Launched in ’81, its elegantly conservative BMW-like styling, plush cabin (remember the gold dash clock?) and superior tin-box chassis engineering (strut front suspension, semi-trailing-arm rear) couldn’t hide the fact that it was badly made and unreliable. With 180bhp it was quick, but soon acquired a reputation for unforgiving handling: the steering was oddly low-geared, and the power rushed in aggressively when the turbos spooled hard.

It spawned a complex range of derivatives until the late ’90s, by which time de Tomaso’s attempts to squeeze as much value as possible out of his investment were looking increasingly desperate. After a flurry of interest, each ‘new’ model disappeared into obscurity, usually with only a few hundred sales, while the crisp sobriety of the original two-door shape – which is now old enough to have a sort of charm – was lost amid unhappy attempts at disguising its age.

The breath taking rate of attrition of these cars seems to confirm their reputation for comic build quality. On the other hand, the scarcity of good examples has firmed-up values of more desirable variants. In Italy, there are even signs that early cars are being collected and coveted.

Rare highlights were the short-wheelbase, Zagato-bodied Spyder and Maserati Karif (the latter with 248bhp and capable of 0-60mph in 4.8 secs) plus the Maserati Ghibli and 170mph, V8-engined Maserati Shamal, although within our budget you are more likely to end up with one of the four-door oddities such as the Maserati 425 or the bloated-looking Maserati 228.

Corrosion was one tradition the Biturbo upheld. It occurred in door bottoms, bootlids and the double-skinned bonnet edge. Rust in the bulkhead, suspension turrets or subframe mountings is terminal.

The V6 engines can do 100,000 miles without major problems but need regular oil changes. Camshafts are vulnerable to seizing and for longevity the turbos should be cooled down carefully after a long run. Smoke from the exhausts could mean that the turbo seals are bleeding oil into the exhaust. Cracked manifolds are an engine-out job to replace.

The ZF gearbox is strong, but can suffer from noisy bearings and watch for jumping out of gear on the overrun.

Cracks in the track-control arms due to electrolytic action are an alarming safety- related problem and the complex system of steering idlers on injected cars can seize. Rear trailing arms also rust.

Contaminated steering-rack mounts can make the helm feel odd as the rack ‘floats’.

Electrics area nightmare, with a vulnerably sited alternator, myriad poor-quality relays and bad earthing. The Fiat Strada fusebox was not up to the job, either: using the heated rear screen could cause it to melt!

Later cars, particularly the Ghibli, were much better and even now can still be used daily. Look out for leaky radiators, rusty discs and annoying engine-management issues – usually corroded fuses or relays

Predictably, the adaptive damping used on younger cars is not the most reliable: the dampers leak and are expensive to replace.

These coupes were built and marketed with the slickness and efficiency that increasingly characterised the products of parent marque Ferrari and recaptured some of the glamour of the ’50s and ’60s Maseratis. Italdesign came up with a voluptuous, compact four-seater with an abrupt tail that featured distinctive ‘boomerang’ LED lights. With its all-wishbone suspension, this was a classic front-engined, rear-drive car powered by a 370bhp 90° V8 with F1-inspired ‘drive-by- wire’ throttle technology and Bosch-supplied traction control. The top speed was 175mph with the Getrag six-speed manual, and 0-60mph took 5.1 secs in a lunge of turbocharged urge.

The 160mph automatic – known as the GTA – used an electronically managed ’box with ‘Normal’ or ‘Sport’ functions that gave different profiles for up- and down changes. The 3200 options list was more extensive than any previous Maserati, with items such as fitted luggage and an emphasis on personalisation.

Inside, it was swathed in leather with no immediately obvious humdrum components to spoil the effect. Unsurprisingly, it was an immediate success – and a Maserati for which no excuses had to be made, with many being pressed into service as everyday cars.

A Spyder version was introduced in 2001: Italdesign chopped 22cm out of the wheelbase to create a two-seater with an automatic electro-hydraulic hood that disappeared cleanly under a panel behind the seats in 30 secs. With prices starting at around £16,000 today, the open cars are still a bit rich for our budget, but this model was also the first to use the all-new, Ferrari-built 390bhp 4.2-litre V8 and early, high-mileage examples of the Coupe just creep under our nominal limit. Like the Spyder, it featured a rear transaxle incorporating a six-speed ‘cambiocorsa’ automated manual paddle-shift gearbox.

The new cleaner, greener, non-turbo V8 had a dry sump and four valves per cylinder with continuous valve timing control for the inlet camshafts, and from 2004 there was the stiffer 400bhp, 180mph GranSport, inspired by the Trofeo one-make racer (from £18k today).

On the 3200, wear in the crankshaft thrust washers of manual cars can cause them to fail, leading to accelerated wear of the crank. The worst-case scenario is the need to replace the crank and rebuild the engine.

Clutches can wear rapidly because the fly-by-wire throttle makes slipping the clutch inevitable in traffic: cars used a lot in town can need a new one every 20,000 miles.

At the front, the lower ball joint is a common failure. At the rear, the Rose joint in the track- adjusting arm (part of the lower wishbone) deteriorates first, giving odd handling. Front anti-roll-bar links also wear, causing a rattle.

A seized adjusting mechanism (a separate servo motor mounted on top of the damper) is a common shock-absorber glitch that pops up an ‘error’ light on the dashboard.

Brake discs corrode because they run without back plates to save weight; handbrakes seize.

The body has no big rust problems, but look for crash damage – front-bumper fit is tricky to get right if it has ever been removed.

3200 electronics are complex and, like most modern cars, vulnerable to irritating ‘engine check’ lights and snags with coded keys.

Q.PIII only just qualifies here, with prices starting at £10k; Q.PIV is a genuine bargain, at Biturbo money; gorgeous Q.PV, from £10k

The 1979-’90 Quattroporte was the last traditional full-sized Maserati, built largely by hand. It gave the old V8 its final home and, along with the Kyalami that shared its suspension, was the first of the De Tomaso cars that bridged the gap between the ‘classic’ era and the coming generation of volume-produced Biturbos.

In an 11-year, 2155-car career, its boxy yet well-proportioned Italdesign lines proved timeless, if rather akin to a Hyundai Stellar. Today it represents the cheapest way into a classic-era Maserati, but it’s worth remembering that it comes with Ghibli running costs. The glory of the Maserati Quattroporte III was undoubtedly its interior, which set new standards of sumptuous leather-clad, air-conditioned and electrically adjustable luxury.

The ‘base’ car was a 4.2-litre, but the 280bhp 4.9-litre unit became the norm, usually with a Chrysler three-speed auto; five-speed ZF manuals are very rare. There were few changes of any significance until the 1986 introduction of the Royale, a built-to-order 300bhp version that accounted for the last 55 cars and featured pewter goblets housed in a coolbox between the seats, plus pull-out veneered writing desks.

I’he Quattroporte name reappeared in 1993 on a new car that, although derived from the contemporary Ghibli, had fresh styling by Marcello Gandini. It was announced with the 287bhp twin-turbo 2-litre V6, but the less powerful export-market 2.8 better suited the automatic ’box. A 3.2 V8 joined the range in ’96, giving the Quattroporte much-needed authority with a top speed of 168mph and a sub-6 secs 0-60mph dash; 630 of these Evolitzione QPs were built through to the summer of 1997.

The handsome Series V was launched at Frankfurt in 2003. This car was hugely significant, representing the end of the beginning of Maserati’s resurrection under Ferrari. Styled by Pininfarina, it looked intriguing and athletic; GQ crowned it: ‘The world’s sexiest car.’ It was roughly the size of an S-Class Mercedes W220, but much more stylish, with interior architecture inspired by the Riva Aquarama speedboat.

The engine and drivetrain followed the 4200 model, of a transaxle, wishbone suspension and ‘Skyhook’ electronic damping. There was no manual option, however, with the cambiocorsa ’box renamed ‘Duoselect’, and the quad-cam V8 gave 400bhp and a 171mph maximum. It won rave reviews, other than reservations over refinement and ultimate durability of the gearbox – the latter answered by the option of a conventional six-speed automatic from 2007 – and lasted until the arrival of the sixth-generation car last year.

Maserati Quattroporte III were special-order only in the UK and all LHD, though two were later converted. Only three £90k Royales were sold here.

The engine is the main worry with early cars, so watch for low oil pressure: a proper rebuild is £25k! Look out for dodgy handling – these heavy cars are hard on suspension components and driveshaft wear can cause wobbly wheels.

Most of the rust problems on the QPIII are superficial – on outer panels and around windows. It’s rare to see structural corrosion.

Electrics on all QPs are troublesome due to complication; check that everything works.

QPIVs are exceptional value. V8s are more exciting, but more expensive to run than the V6s, some of which have done high mileages as everyday cars. The V8 is a car of the plugin diagnostics era, with lots of warning lights.

At this price, you are looking at early ’03/04 QPVs, which are quite plentiful. Servicing must be by a main dealer or a specialist with proper diagnostics kit. Good history is vital.

The paddle-shift ‘box is the main bugbear of QPVs (the later auto is far costlier), with a clutch that needs changing every 30,000 miles depending on use – a £1500 job.

The V8 is fairly bulletproof and high mileages shouldn’t be feared if there is service history to back it up, but all parts are expensive.