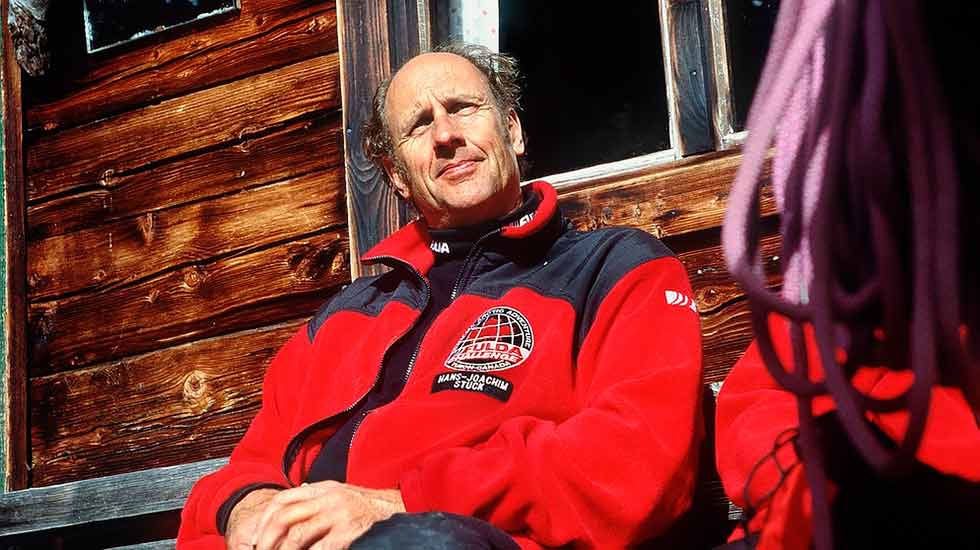 He must have been crazy to drive this thing up the hill that fast.  Hans-Joachim Stuck followed in his father’s wheeltracks at this year’s Classic Nostalgia meeting. Mick Walsh tells the story of a momentous weekend. Photography Steve Welsh/LAT/Richard Whitefoot.

Auto Unions have returned several times to Shelsley Walsh, but not since July 1936 had the deafening stub exhausts of the sensational V16 Type C been heard roaring up the Worcestershire course. Eighty years later, the weather couldn’t have been more different and, although the full-face helmet looked alien in the mid-engined 530bhp Silver Arrow, the mighty sound will never be forgotten by the crowd that lined the sun-drenched hill.

At the wheel was Hans Stuck’s famous racing son Hans-Joachim. The two-times Le Mans winner had flown in earlier that morning from Austria and, unlike his father in ’1936, didn’t have time to practice before the public demonstration up the 1000-yard course. As you’d expect, an emotional Stuck put on a dramatic display, and those positioned at the exit of Top Ess were amazed to witness an opposite-lock power slide as the car blasted up the finishing straight.

Stuck later swapped his full-face lid for leather helmet and goggles and, with BRDC badge embroided on his period-style white overalls, looked uncannily like his father. In this more authentic gear, Stuck made a further couple of ‘demonstration’ runs, holding onto the revs up through Crossing, but understandably without quite the verve of the first run.

Stuck was full of awe for his father’s achievements in this fearsome titan: “He must have been crazy to drive this thing up the hill that fast. It has incredible power but no grip. I can’t imagine what it’s like in the wet. The throttle response is fabulous, but the low-down torque is just as impressive. At 2500rpm, it produces 627lb ft!

The gearbox is better than I expected, the drum brakes work well, but the steering is a bit slow. “The back end stepped out a little when accelerating out of the top corners, but you don’t feel it at first because you are sitting so far in front of the centre point. It would be difficult to catch. Everything feels heavy, and I can’t imagine how my father drove it for 4½ hours around the old Nürburgring. You just can’t compare it to modern race cars.”

The motorsport indoctrination of two generations of Stuck couldn’t have been more different. While the son first raced at the Nürburgring in a BMW 2002ti when he was just 18, Stuck Snr honed his driving technique on his farm near Munich. Legend has it that, rather than pay the delivery money for the train, Stuck bought a Dürkopp and opted to transport the milk himself. The pace of his early-morning trip to Munich soon increased, with Stuck even buying a stopwatch to check his times. The challenge became famous in the area, and eventually the local Bayerischer Automobil-Club encouraged the 23 year old to enter a hillclimb.

Class wins through 1923 soon followed, and his new career was launched. In 1934, Stuck joined Auto Union, and when he won the German Grand Prix the following year he became a national hero. Amazingly, the winning Auto Union was detuned and driven from Berlin to Zwickau, with children allowed out of school to cheer him on. Stuck then received a huge welcome at the Horch factory.

As well as Grands Prix and record-breaking challenges, Stuck was determined to maintain his reputation as the Bergmeister, and soon tuned his skills with the tricky Auto Union for mountain roads. The team’s first victory came in 1934 at Felsberg – the fastest hillclimb in Europe – where Stuck stormed the five-mile course to win at 91mph. Glory continued the following weekend at Kesselberg, where he beat rival Rudolf Caracciola’s Mercedes W25 to reclaim his hill record. The season climaxed with quickest time at Mont Ventoux, Stuck demolishing the record by 53 secs to take the European Championship.

Two years later, Auto Union sent a special short-chassis racer to Shelsley Walsh because it was part of that year’s championship. Some disapproved of the pre-event practice runs on the Friday, when Stuck’s unofficial 39.6 secs equalled Raymond Mays’ ERA record, but it was a very different story on the big day in grim, wet conditions. His best was only 45.2 secs, but the first-ever appearance of a Silver Arrow on British soil was never forgotten.

Stuck put in an impressive effort, fighting the wheelspin in a series of opposite-lock slides up the hill. After a scare with parked cars at the finish, which forced him to lift off early, he shrugged off the disappointing challenge with good humour. “Too many horsepowers,” he claimed, while another talented German, Walter Bäumer, sensationally beat the Grand Prix ace to take equal second-fastest time in a works sidevalve Austin Seven single-seater.

The drama of that event is one of the great moments in British hillclimbing history, and full credit to Audi for embracing the anniversary with such passion – as it had done for the 50-year celebrations in ’1986, when Hannu Mikkola gunned a Group B quattro up the hill and set a new closed-car record of 29.94 secs.

This year’s meeting provided another never-to- be-forgotten spectacle. Stuck Snr lived until 1978 and therefore witnessed his son compete in Formula One, so not surprisingly the Classic Nostalgia weekend was an emotional one for Hans-Joachim on his first visit.

“There were a few tears inside my old goggles as I drove back down the hill,” he reflected. “Shelsley is a very special place, and I now see why my father loved coming here.”