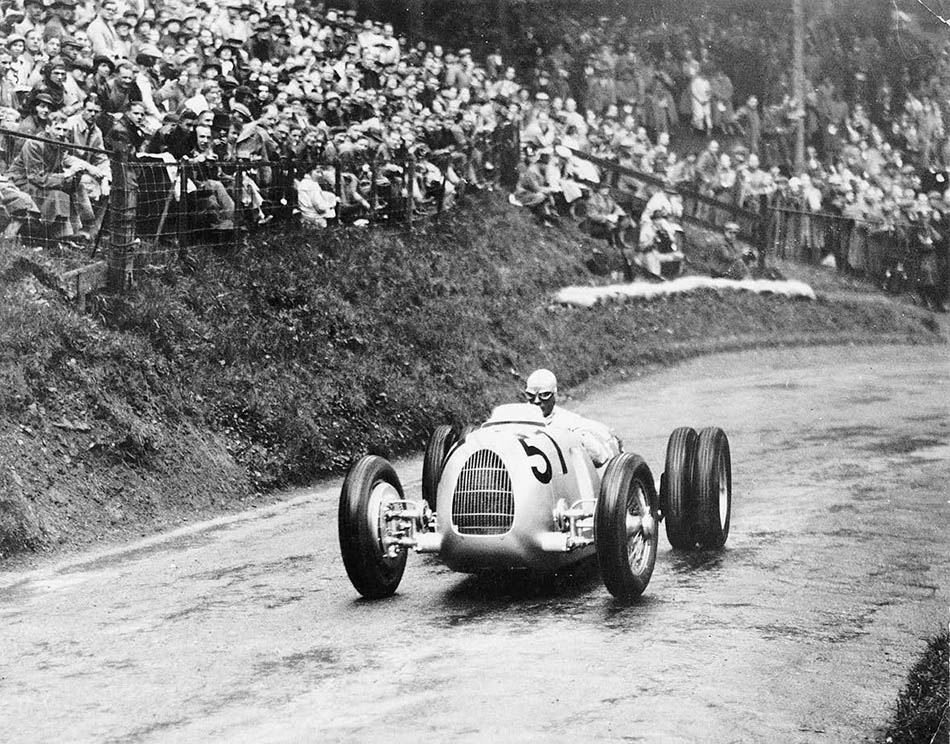 A little over 80 years since his father competed at Shelsley Walsh on June 6, 1936, 1990 DTM Champion Hans-Joachim Stuck will race a replica of the 520 PS supercharged V16-engined Auto Union Type C up the challenging hill climb, the world’s oldest motorsport venue in continuous use.

The event is part of the Classic Nostalgia days at Shelsley Walsh, which run from 9.30 am until 5.30 pm. Tickets costing £17 for general admission on Saturday, 16 July or £30 for a full weekend pass can be purchased in advance from the Shelsley Walsh website at www.shelsley-walsh.co.uk Setting an overall best on the day of 45.2 seconds, Hans Stuck senior claimed victory in the ‘Over 5 litres Supercharged class’, although his performance was hampered by wet weather that significantly slowed his attempts to improve on this.

A report following the weekend’s activities originally printed in Motor Sport Magazine in July 1936 (issue 337) described how Stuck senior was confronted with a ‘sharp shower of rain’ and had to battle ‘colossal wheelspin’ in an effort to launch the mighty mid-engined rear-wheel-drive V16 racing car off the line.

On Stuck’s second attempt, Motor Sport recounted how he was ‘rewarded by the most ferocious series of tail wags we have ever witnessed, his elbows in turn rising high above the car’s side as he corrected the skids, and finished the run with a skid across the line which must have made the timing officials jump for their lives!’

In 1934, Auto Union, the forerunner of the modern Audi, began competing in Grand Prix racing, and along with its main rival Mercedes-Benz went on to dominate the series with cars that were soon to become known as ‘Silver Arrows’.

It seems almost incredible today, but by 1936 the Auto Union racing cars were reaching speeds of over 235 mph on the long straights of the Avus circuit in Berlin.

‘The Auto Union Type C was the most successful German racing car of the era, having won three out of five Grand Prix by 1936…’

By the end of 1937, Auto Union had competed in 54 races and won 32 – setting 15 world records in the process. The Type C was the most successful German racing car of the era, having won three out of five Grand Prix by 1936 and half of all circuit and hill climb races that Auto Union entered.

It was the third iteration of the brand’s Silver Arrow Grand Prix car, and by this stage its V16 engine had a displacement of 6.0 litres, producing a colossal 520 PS output with maximum torque of approximately 850 Nm at 2500 rpm.

During the 1934 -1937 period, the basic design concept remained unchanged, with the V16-cylinder engine located in the centre of the chassis, behind the driver’s seat. Beneficial to both weight distribution and traction, this ‘mid-engined’ configuration continues to be used to this day by highperformance road-going supercars such as the Audi R8.

During his illustrious racing career, Hans Stuck helped to encapsulate the wonderment of the Silver Arrows.

In 1934 he scored the first race victories for the newly established Auto Union racing department. Stuck set several world speed records right from the start on the Avus racetrack in Berlin, at the wheel of the 16-cylinder racing car originally designed by Ferdinand Porsche.

More victories in the car’s first season ushered in the legendary ‘supercharger era’ that was only brought to an abrupt end by the outbreak of the Second World War in 1939. Stuck senior was unofficial European champion in 1934, though this title was first awarded officially only a year later. He was the only Auto Union driver who drove these cars without a break every year until 1939.

Upholding the family tradition of exemplary motorsport success, Hans- Joachim Stuck has an equally impressive score sheet and is considered a hero in the Audi motorsport hall of fame.

In 1970, Stuck won his first Nurburgring 24-hour race at the age of 19, and again in 1998 and 2004, took victory in the 24-hour race at Spa in 1972, then saw some success in Formula 2 and Formula 1. In 1989, Stuck junior won seven of 13 races in the IMSA GTO series, taking third place in the championship overall. A year later, Audi entered the German Touring Car Championship with the 462 PS V8 quattro, in which Stuck secured the driver’s title.

Stuck, nicknamed ‘Strietzel’, also claimed victories for Porsche at the Le Mans 24 Hours in 1986 and 1987, as well as clinching a class win there in 1996. Since 2008 he has had an advisory role with Volkswagen Motorsport and in 2012 was appointed President of the German Motorsport Association.