The whole ‘retro’ movement has earnt itself something of a cult status; with some of the biggest names on the planet, like Coca Cola, pushing their history and provenance to the forefront of their marketing blurb. Even our beloved Volkswagen have been getting in on the act, with the launch of their newest Beetle closely mirroring the original, and the ‘Clark Plaid’ (Tartan to you or I) seats now a staple of any base ‘GTI’ model. There are whole swathes of us dedicated to dressing like we were born 30 years earlier, listening to our parents’ music, and spending obscene amounts of money on toys that we trashed as kids. 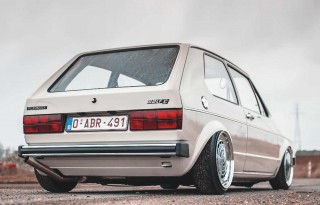 So it’s no surprise that the retro look has become such an enormous part of the car scene, with car clubs the world over dedicated to ‘Old Timers’. The Belgians have always been at the forefront of ‘niche’ movements within our world; with somewhat draconian laws governing modifications and tuning, they’ve always been somewhat creative, and known for leading the world with new looks and styles. Those of us that remember cleaned.be know exactly what I mean… Thirty-five year-old Timmy Hermans is someone known for not really caring what people think, and building what he likes, which is a sentiment we love! Born and raised in Bornem, a small town just a few miles south of Antwerp, Timmy has long held a passion for all things German. With his father’s Mk1 Jetta being firmly entrenched in his mind, it’s no surprise that he ended up going down the Mk1 route. “I was 5 or 6 years old, and the car was Mars red.

I remember him selling it to a guy he played soccer with, who didn’t really take care of it at all, and f*cked it up totally. It hurts me, even though I was only a little boy, that he never gave that car the love it needed.”

Timmy, as most of us do, worked through a number of cars before he found ‘The One.’ With a few of Bavaria’s finest under his belt, including an E36 318i and E87 118i, he finally made the move to Volkswagens for good. After a Mk4 Golf Cabrio, which was completely ‘shaved’ (we don’t judge), Porsche seats and a bespoke leather trimmed interior, and a 9N3 Polo on Audi’s ultra-rare Parabols, he made a decision that would forever change his life, and picked up his favourite car of all time; a Mk1 Golf.

It was a five-door silver (we know, the one in the pictures is a 3-door, just bear with) 1.6 normally aspirated diesel. It was by no means the most desirable Golf ever produced, granted, but it was a Mk1, and Timmy had big plans for it. With a full respray required, and Timmy not one to do things by halves, he was diligently saving up, to make sure he could do the car the justice it deserved. Not only that, but he wanted to ditch the later plastic bumpers for the earlier-style chrome type; something that those of us who’ve owned Mk1s know is not a cheap modification to do properly.

It was almost fate when flicking through an online Belgian classified site one evening, Timmy came across a stunning Mk1 that had already been repainted in a very rare original colour, complete with those chrome bumpers he craved so much. After doing the working out the math, he figured out that the sale price of the car was pretty much exactly what he’d need to spend doing what he wanted to his, and had the bonus of it being a 3-door (there you go) with a low mileage petrol engine. Resultaat! (It’s Dutch for result, if you hadn’t guessed).

Despite having been recently painted, the engine bay and interior needed some TLC. Luckily, Timmy is a detailer by trade, so this posed no problem whatsoever, and quicker than you can say “oh my, dit is echt een fantastisch voorbeeld”, the powerplant and it’s now 36-yearold home was looking better than new.

“The interior was original, beside a few Wolfsburg parts, which I quickly replaced with good quality originals,” muses Timmy. “The seat covers were in very good condition, but the internals were very tatty and needed replacing.” That’s right, those super-cool pre-headrest seats are the originals, and once he’d replaced the brittle foam inside they were looking ‘on point’, as the kids say nowadays. While the seats were out, Timmy decided it would be rude not to rip the entire interior out and give it a proper clean, so that’s exactly what he did; carpets, door cards, the whole lot. Being a professional detailer by trade, this was something he took in his stride, and once it was all back together, it looked like it had just rolled out of the factory. Aside from the addition of an authentic Spucknapf steering wheel. 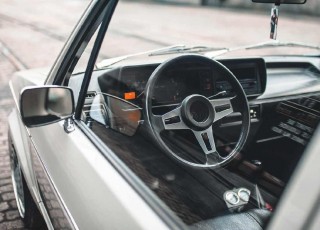 With the interior and engine bay all shipshape and shiny fashion, it was time to move onto the most important part of any build … the aesthetics. Timmy had had the vision of his perfect Mk1 all along, and it came in the form of Guy Maes’ incredible Manilla green ’1976. “For me, it’s the most incredible Mk1 on the planet! It combines a beautiful colour with original details, on a sick set of wheels. When I first met Guy it was on 17” BBS E52s, and I’d never seen a car as perfect that was still able to drive. Lots of show cars with clean engine bays and chrome parts come on trailers, and that’s not how it should be!” Amen to that.

Firmly inspired, and absolutely adamant that his car was never going to be a trailer queen, Timmy set to work on his, by now, concours Mk1. With a completely custom air-ride kit already in his possession, destined for his previous Mk1, there was never any question about what suspension the car was going to be rolling on. So, despite never having done anything remotely similar before, Timmy set to work on installing the setup himself. Originally built by Kean Suspension, the Koni struts and Viair bags went on like the proverbial piece of cake, and once it came to installing the lines, valves and cables, he took his time and did it right. Detail, after all, is everything on a build like this. With all hardware by Viair, including an aluminium tank and 480cc compressor, he knew that the system would be reliable. The chassis rails were notched during the process, for ultimate low scene points.

The custom install was built by Timmy, too. Nestled in the boot, half beneath a false floor, the hot rod-inspired copper lines and colour coded tank and compressor embody the build perfectly; simple, clean and uncomplicated, but of ultra high quality. Perfect.

With the air ride fitted and doing up-down-up things like it should, Timmy had a decision to make; wheels. Wheels can make or break a car like this, and there’s one surefire way to make any Mk1 look a million dollars (Euros?) – the trusty BBS RMs. With a set already purchased for his original Mk1, it was a no brainer to run them on this one. And this was perfect, for a while.

But Timmy wanted something different eventually. Taking inspiration from the numerous sets of custom split monoblocks that were appearing on the show scene, he had an idea. And, if he could pull it off, it would be perfect… …which, obviously, he did. Finding a set of Ronal R11s is akin to picking up a bucket of rocking horse excrement. Picking up a set with a view to cutting them up is something close to absolute sacrilege, but my god do they work!

Starting off as 14s, by the time Timmy’s wheel builder had finished with them, they were stepped up to 16”, and now existed in three separate pieces. Built up using original BBS hardware, Timmy decided not to go OTT on the sizing, trying to keep them looking as period as possible. The fronts ended up at 7” wide, using a 1” lip, with the rears a perfect 8” with a 2” lip, with 20mm spacers front and rear to get the stance nailed. 165/45 16” Nankangs provide connection to the ground, whilst keeping that all important perfect stretch. With the wheels on, Timmy quickly realized that the arches couldn’t quite cope with the wheels when on the ground. So both front and rears were tubbed and widened for extra clearance, and painted body colour for originality. Whilst in the body shop, Timmy decided he didn’t need the rear wiper anymore, alongside the radio aerial. Like we said, it’s all in the detail.

With the major parts completed, Timmy could concentrate on the finishing touches. The wipers, rear view mirror, door handles and mirrors were all swapped with brand new chrome replacements, adding to the retro feel, whilst the original frosted headlamps were traded in for the ubiquitous crosshairs. The final change were the rear lights, which Timmy changed out for all reds, setting off the sometimes bland back end.

With the car finished and on the road, people were constantly asking about engine swaps etc. With Belgian laws the way they are, this was something of a no-go, which didn’t bother Timmy one bit. “It’s the original 1.1 four-speed, which means it’s slower than continental drift, but I like it that way! She’s an old lady, and I don’t want her having a heart attack. After four or five months it started running really bad, and I was convinced it was the end for the original motor. We completely rebuilt the carb and ignition system, and now she runs better than ever.” 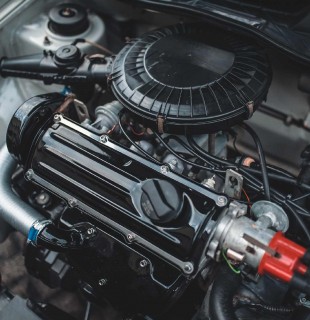 Originality is something that has played a big part in Timmy’s build. With the car resprayed in it’s original Pastel grey (LY7B), and sporting its original but spotless engine, it would have been a shame to modify it too extensively. Which is exactly why he’s stayed so true to this car’s original soul.

“It doesn’t have aircon, GPS or electric windows. It doesn’t even have a stereo! But I like the originality of it. This is how it was in the 80s, and how it will always be as long as it’s mine,” he smiled.

The spec list may not be super long on this car, but it really is one of the best Mk1s we’ve seen in a while. A build is, ultimately, the sum of its parts, and Timmy has made sure he hasn’t gone overboard with the bolt ons. It’s been done right.

“Picking up a set of Ronal R11s with a view to cutting them up is something close to absolute sacrilege, but my god do they work on the car”