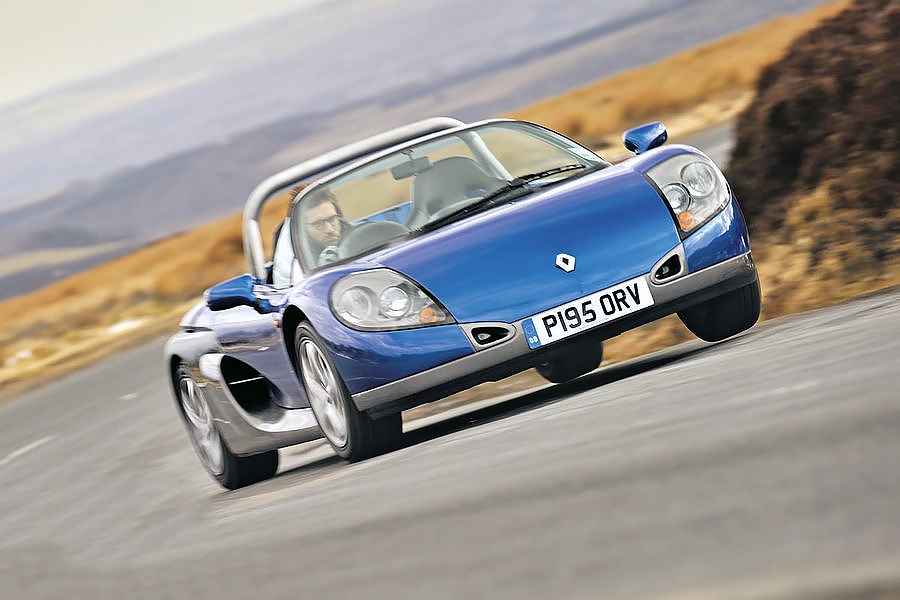 Those of a shy and retiring disposition should look away now. If you do not want to be stared at everywhere you go, or you don’t want people to take photographs on their mobile phones as you drive past, do not buy a Renault Sport Spider. If, on the other hand, you want every outing to be an adventure and you want to own something that is guaranteed to put a smile on your face, step this way…

You don’t even have to be in it to enjoy it. The bonkers exterior was shaped by Benoit Jacob under Patrick Le Quement and, with its mixture of sharp lines, creases and curves, it looks like nothing else. Many Sport Spiders were finished in yellow – as if the model needed any help to stand out. 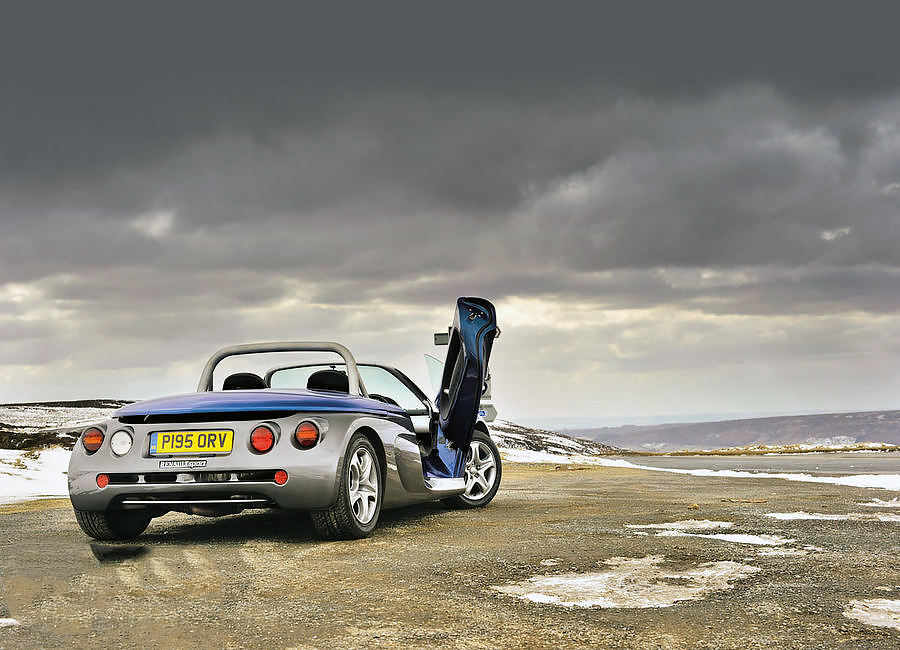 There are no exterior handles, so you have to reach inside to release the scissor doors, which swing up and forwards. Drop into the supportive Recaros, pull the door back down and you are enclosed within a cabin that rivals the Elise for minimalism. Ahead is a small instrument binnacle with a rev counter flanked by oil-pressure and water-temperature gauges. If you want to know how fast you’re going, look to the digital readout in the centre of the dash.

Our featured car is one of 96 right-hand-drive UK examples, which means that it has a windscreen – left-hookers simply had a wind deflector – but that’s about it. There’s no heater and, while there is a hood, it is perfunctory at best.

Contemporary road tests naturally compared it to the Elise. It was unveiled in the same year – at the 1995 Geneva Salon – and built in the old Alpine factory at Dieppe. There was a one-make BTCC support series, too, which helped to launch the careers of Jason Plato and Andy Priaulx. In other words, Renault gave it the very best chance to succeed, yet somehow it didn’t – at least not to the same level as its Hethel rival.

The concept was similar to the Lotus, with an extruded aluminium chassis, but Renault welded it rather than bonded it, which, of course, made it heavier. The Sport Spider tips the scales at 955kg and, despite the fact that it used the 150bhp engine from the Clio Williams, some bemoaned the comparative lack of performance.

But here’s the thing: it still gets to 60mph in 7.4 secs, which means it’s not exactly slow. And the lack of sound insulation makes it feel even quicker. Okay, if you happened to come up against an Elise during a track day you might yearn for another 20 or 30bhp, but for the rest of the time it simply doesn’t matter. You’ll be charging between comers having a great time.

There is a massive amount of grip on offer, and a virtual absence of pitch or roll, while die steering is ultra-direct. The brakes were borrowed from the Alpine A610 and are efficient rather than outstanding, a description that could equally be applied to the gearchange. There is, incidentally, a slightly bizarre arrangement for selecting reverse, which involves twisting the lever before moving it left and forwards.

‘IF YOU WANT A CAR THAT’S GUARANTEED TO PUT A SMILE ON YOUR FACE, STEP THIS WAY’

But that matters not a jot. And neither should you care when Elise owners boast about kerb weights. If you think anything built after 1980 is sanitised and soulless, you should embrace your inner extrovert and experience a Sport Spider.

THE KNOWLEDGE FACTFILE WHAT TO LOOK FOR

• Check the windscreen and the headlight covers: the former will cost around £1000 to replace, the latter about £220.

• As with the Elise, the suspension should be firm and taut. If the car feels neither of those things, it could need a damper overhaul (£180 per pair) or new balljoints.

• A full service history is a must. Look for evidence of a cambelt change – this should be carried out every 72,000 miles or five years.

• If the gearbox feels sloppy or you have difficulty selecting reverse, it could be that the spring and bush need replacing.

• Be prepared to find modifications, which can range from hotter cams to a Trophy exhaust and four-piston front brakes.

Thanks to Lisa Haworth-Langford at Renault UK