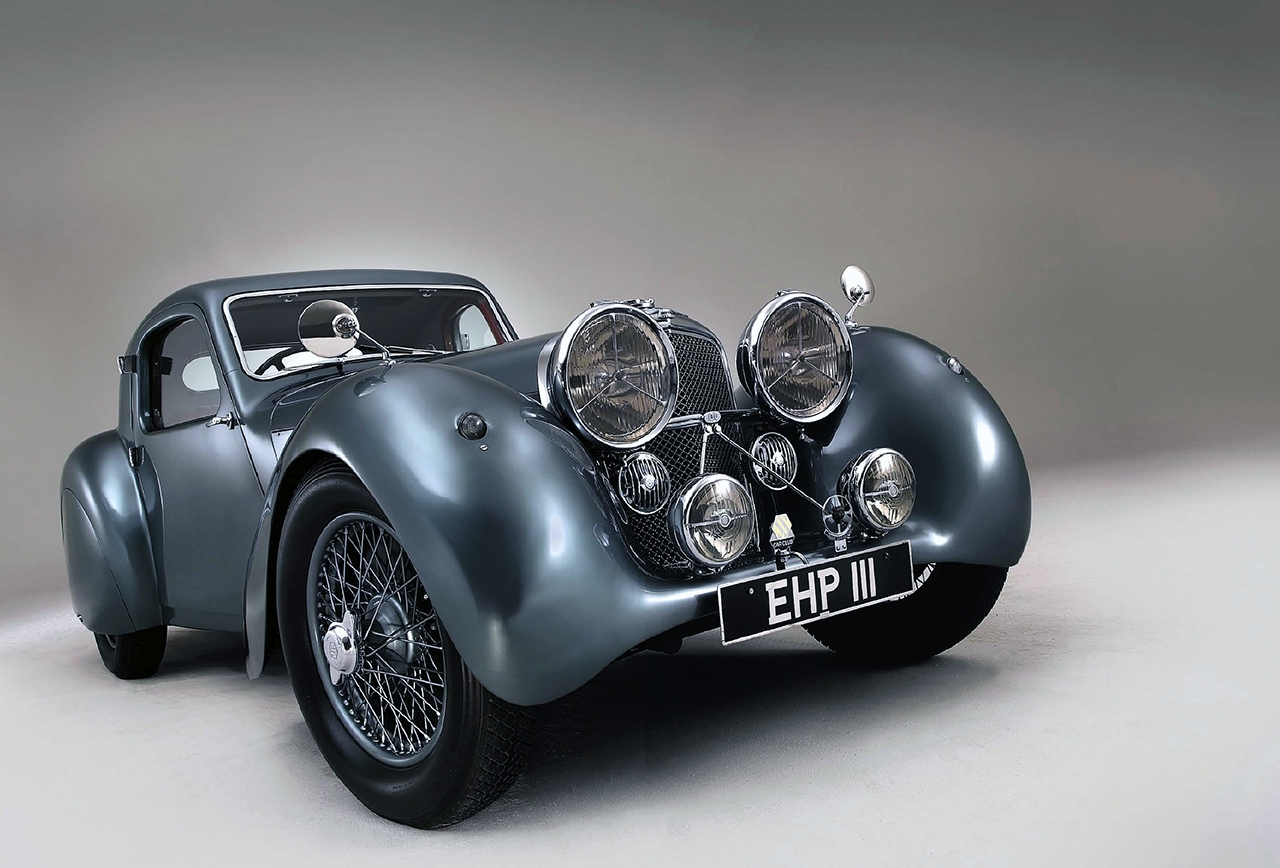 Rakish and British, reported The Autocar about the stunning SS Jaguar Coupe at the 1938 Earls Court Motor Show. ‘One of the most successfully guarded show secrets’ was a dramatic metallic-grey streamlined machine based on the flamboyant SS100. From its closely set Lucas P100 lamps and FT58 spotlights to the neat, bumperless rump, the prototype was the pre-war equivalent of a concept car. 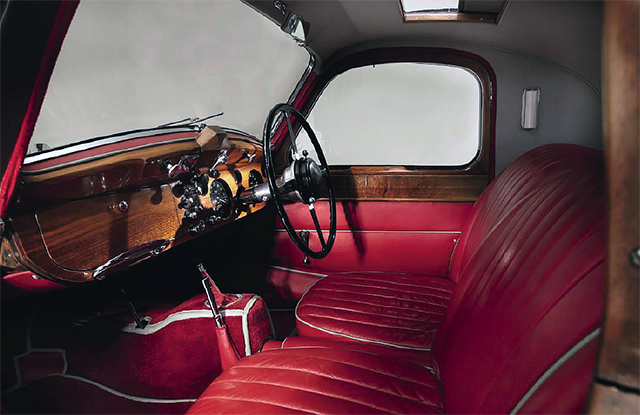 Unlike with today’s constant stream of pre-event press photos, Williams Lyons and his team had kept the compact showstopper under wraps until the event was opened by HRH The Duke of Kent, who was reputedly smitten by the design. Keen to promote the name change from SS – with all of its grim associations – the new model carried bold Jaguar numberplates while the £595 price-tag was a discreet tax disc-sized sticker on the corner of the windscreen. The standard 3 1/2-litre roadster was a third cheaper, although Jaguar historians agree that Lyons only intended to make one hard-top.

From his early years crafting sidecars, Lyons had always had a brilliant eye for seductive form. Story has it that the company founder hardly ever put pen to paper, but worked closely with coachbuilders to create only a full-scale version.

There are rumours that the SS100 Coupe was a freelance project built by Corsica, although the small London firm was too far from Coventry to be practical. Lyons was a busy, resourceful type who’d want to keep popping down to the body- shop to check on progress. His styling legacy was remarkable, directing three of the most beautiful coupes – with the one-off SS100 pre-empting the XK120 fhc, and later the sensational E-type. 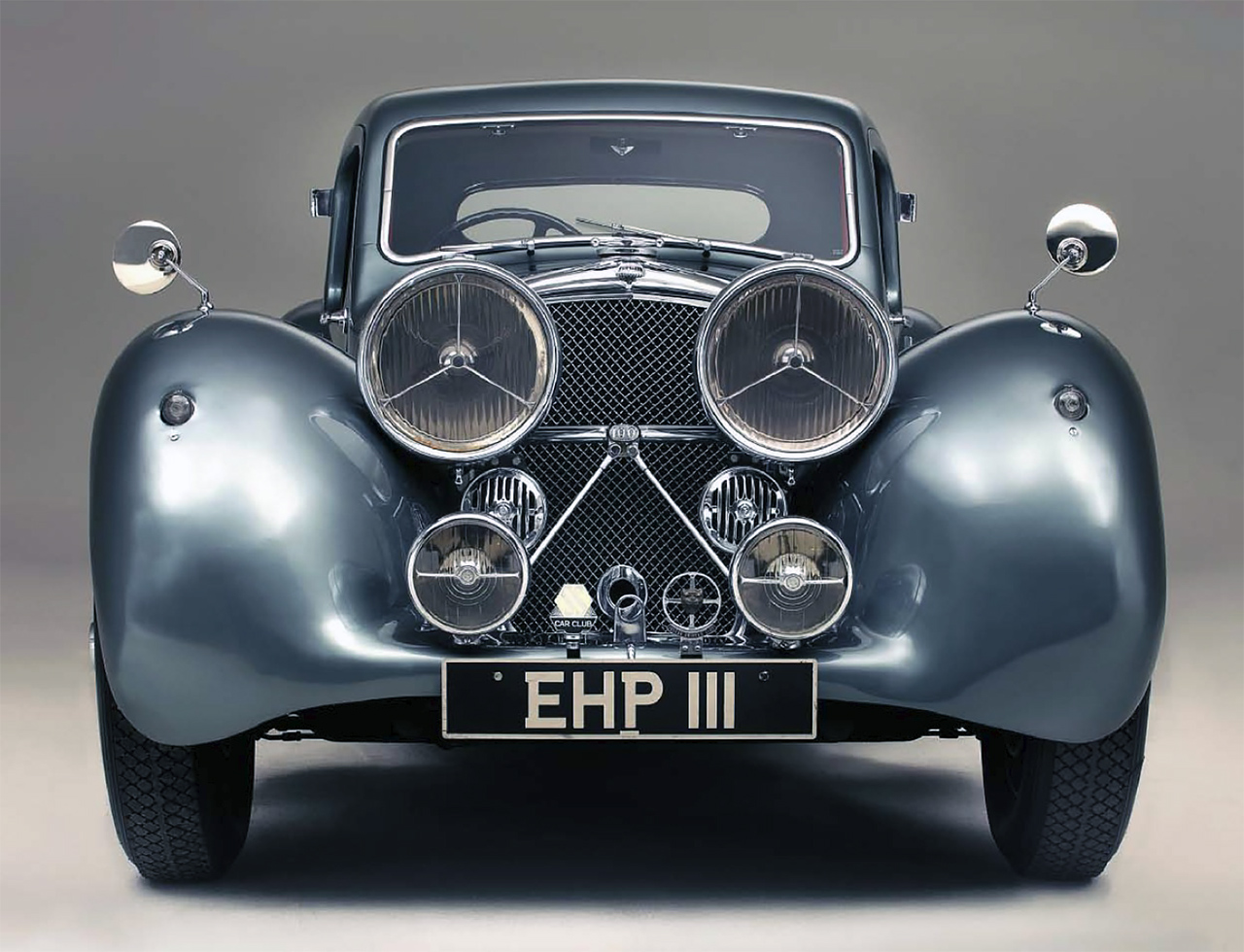 Fixed-heads were in vogue at the last London Motor Show before WW2, and the spectacular exhibition was packed with industry leaders and sporting personalities. As well as his outstanding aesthetic judgment, Lyons was a master at promoting his range. With no new models to offer in 1938, he needed something special to capture the attention of press and public alike. There’s no record of when work on the SS100 Coupe began – recent months had been stressful at the factory with the co-ordination of body pressing suppliers – but it could have been as late as the Autumn before it was planned. The influences are clear because Lyons had long admired

‘WITH NO NEW MODELS TO OFFER IN 1938, LYONS NEEDED SOMETHING SPECIAL FOR THE SHOW’

Jean Bugatti’s styling, particularly the elegant Type 57 Atalante. Raymond Sommer’s fabulous Alfa Romeo 8C-2900B coupe had dominated at Le Mans in June before a tyre blowout, plus the Mercedes 540K Autobahn-Kurier had been the talk of earlier European salons. Although the improved 3 1/2-litre roadster had only been announced the previous year, its lines had started to look dated alongside more curvaceous Italian and German rivals – notably the BMW 328.

Lyons firmly believed in hiring the best and, with the talented Cyril Holland overseeing the coach building, the body of the closed SS100 was completely hand-made. Only the bonnet and radiator were shared with the roadster. To speed up construction, detail parts were borrowed from other models including its black-faced dials, switchgear and door fittings. Inside the fold-down bootlid was a set of tools from the saloon. Unsurprisingly, it weighed 336lb (152kg) more than the open car, yet it was still good for 100mph-plus with the torquey 3 1/2-litre, 125bhp ‘six’. And it’s believed that Lyons had a change of heart about the colour before deciding on a new German silver-grey polychromatic cellulose.

To avoid the direct competition on a busy opening day at Earls Court, Lyons had the new Coupe transported first to the Grosvenor House Hotel in Park Lane for selected special guests. ‘Had I seen it at the Paris Show where are exhibited all the really good looking cars, I would have priced it at £1500,’ wrote Tommy Wisdom in a special Motor Show issue of the Daily Herald.

The magnificent SS100 Coupe featured in all of the press reports, many singling it out as the star. Better still, it was quickly sold off the stand to a previous Jaguar customer, Leo March, who generously gave it to his son Gordon when he turned 17. Nicknamed the ‘Grey Lady’ and registered EHP 111, it spent most of the war in storage, but March junior sold it afterwards to John J Sheehan for twice what it cost new. March had fitted a pair of fancy twin horns plus Ace disc covers on the front wheels. A Wardour Street- based film producer later bought the car and tarted it up with XK120-style bumpers, a radiator mascot, Auster wind deflectors and brash red paint. Looking quite caddish, it would have been perfect in School for Scoundrels. 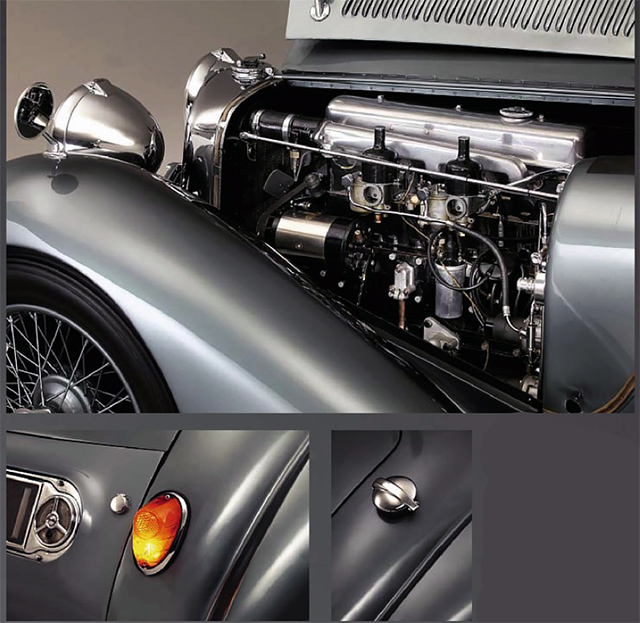 The fourth owner was Colin Glanfield, a 20-year-old photographer working for Marks & Spencer. The SS100 had long been his dream car and, in 1955, when Glanfield spotted the one-off Coupe – by then painted in two-tone metallic bronze and for sale in The Autocar with Chip- stead Motors of London – he had to have it. The £385 price was almost his annual salary but, by trading in his Hillman Aero Minx and starting a hire-purchase agreement that his father volunteered to guarantee, the SS100 was his. The step up in power could have been disastrous were it not for some performance driving lessons with a local Kent enthusiast – one Bernie Ecclestone! Glanfield was constantly in trouble for speeding, and amazingly talked a friendly officer into timing EHP 111 on a long downhill stretch where it clocked an impressive 105mph. At some point a copper compression plate had been fitted so that the engine would run better on pool petrol during the war, but it regularly troubled XK120 drivers once returned to an 8:1 compression ratio and using 102-octane fuel.

Glanfield had the car resprayed dark bronze during his ownership, and discovered that EHP was originally white under the grey show finish. Memorable trips included a return to Browns Lane when his father kindly offered to pay for the fuel and, to his cost, learnt that the coupe has a larger tank than the roadster. At the factory entrance, the gatehouse ‘sergeant’ remembered the car and phoned through to Lyons’ office but, frustratingly, the boss was away that day.

As Glanfield’s car-owning chums started to acquire sportier TRs and MGs, so the SS100 began to look unfashionable and was traded for a Healey 100. Dealer Jack Bartlett paid £400 for the Coupe – with the proviso that it wouldn’t be sold to America – but by the ’70s it was unearthed in New York in a sad state by SS collector Robert Danny and Adrian Hamilton. When Danny’s impressive set of Swallows, SSs and Jaguars was eventually split up, respected British specialist

David Barber brought EHP back to England where it was restored as an early retirement project in his Norfolk workshop. Finally, the metallic silver-grey was reinstated. During the stripdown, Barber uncovered the hand-built nature of the bodywork, with extensive notches and cutouts to make it fit the standard sports car frame. Hastily adapted to fashion the boss’ Motor Show whim, even the radiator had to be chopped to accommodate the new wing line. The main chassis modification was the use of a thicker and shorter saloon-type steering column. Lyons also had the seats located further forward and apart to clear the rear wheelarch. Barber recognised all of the dashboard and interior fittings – as sourced from other models – while the toughened glass was unique to the car.

In contrast to the roadster, the coupe had a sizeable boot with the spare stored horizontally in a compartment beneath it. Barber reckoned that fitted luggage would have been planned, too. Under the flowing tail, it featured tubular extensions from the jacking points with U-shaped brackets to mount the main timber frame. At the front, the bonnet was stock roadster but with no top louvres. Barber found evidence of extra detailed finishing for Earls Court, although the only engine-bay design alteration was the addition of inspection lights on either side.

The cabin was red as confirmed by Laurence Pomeroy in The Autocar’s show report, which featured a cartoon by F Gordon Crosby with a caption based on the children’s song The little red caboose behind the train. The sketch amusingly accentuates the length of the bonnet, while the famous journalist complimented the compact form but didn’t like the heavier pontoon wings. Barber’s extensive SS100 experience included racing the rapid ‘Old Number Eight’, although he wasn’t enchanted by the Coupe’s styling.

“Lyons had clearly looked at contemporary continental trends, but in my view the SS100 was too small for this type of coachwork,” he told historian Andrew Whyte at the SS100 Golden Fifty, where the impressive rebuild made its debut. “The company was only just getting over the problems with the four-door pressed-steel body, and this was clearly a one-off show job.”

SS100s have always had a keen following in the States and, by ’87, the Coupe was back across the Atlantic with Bob Cole who entered it for Pebble Beach, but without trophy glory because Barber’s sympathetic restoration was no match for dazzling American standards. The styling, however, was much praised, and Cole later commissioned a superb set of photographs that were shot during twilight in San Francisco with the Golden Gate Bridge as the backdrop. By December 1995, though, it was once again in the UK for auction with Brooks at The Natural History Museum, London, where it failed to sell.

Rarely seen since, EHP is now a talking point in DD Classics’ Deco-style showroom by Kew station. If ever a pre-war British design could steal the limelight at prestigious concours events such as Villa d’Este, this Lyons beauty could be the one. I just wish that I had the funds to buy it and put the finishing touches to the restoration to celebrate its 75th birthday in style.