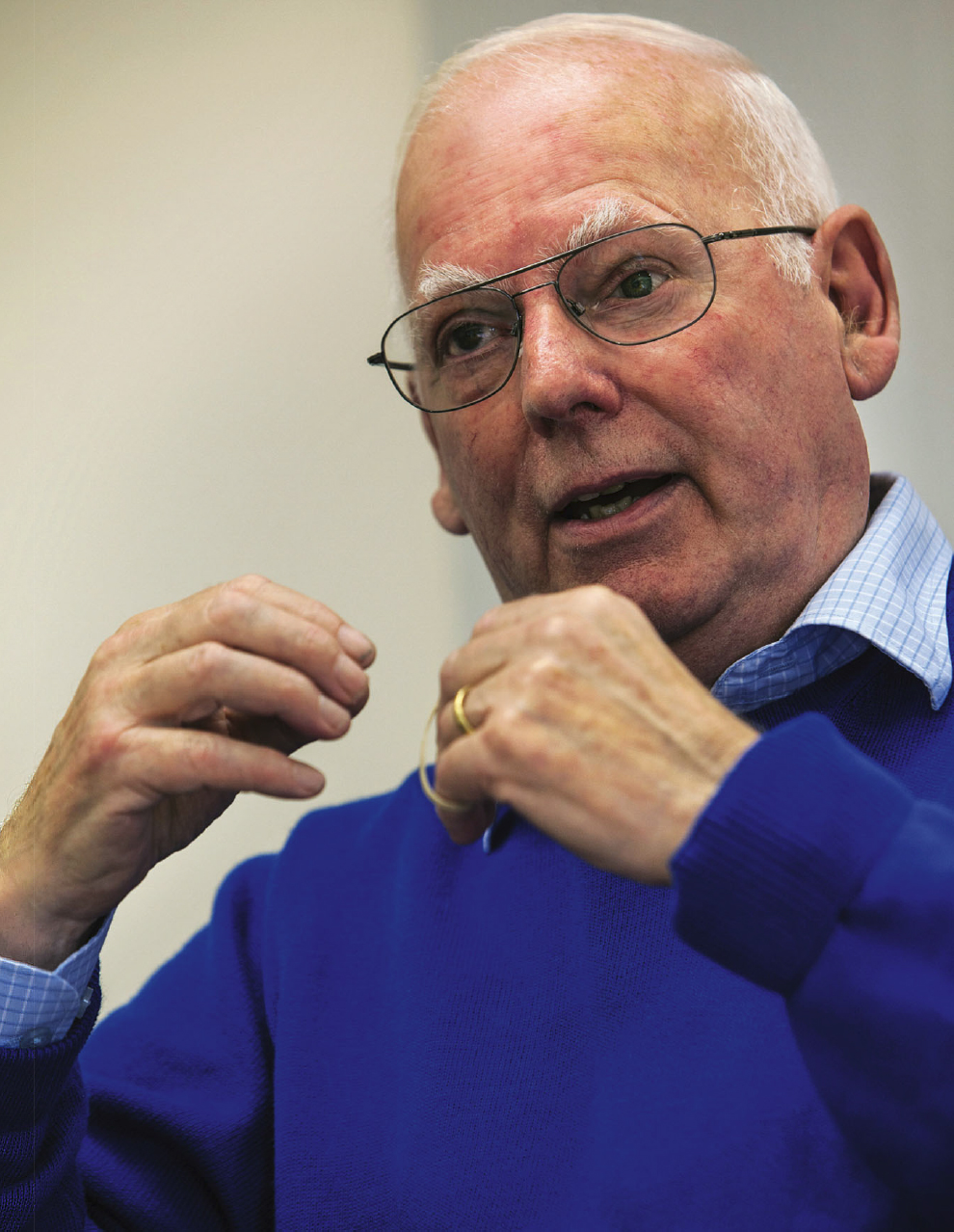 You could call it six degrees of separation but two, maybe three, is probably closer. Peter Browning is on a roll, quietly dispensing anecdotes with wit and warmth. It’s abundantly clear that he has worked with the great and the good of motor sport, with names as diverse as Paddy Hopkirk and Emerson Fittipaldi, AJ Foyt and Mika Häkkinen hanging in the air as one yarn ends and another begins. He has been employed as clerk of the course at Grands Prix and British Indy Car meetings, on Marlboro’s young driver programme and as an organiser of historic rallies. And that’s just a thumbnail sketch of a career in competition spanning five decades.

The choice of meeting place for our interview, Kimber House in Abingdon, is apposite. The MG Car Club bookended Browning’s career. Until relatively recently, he was the club’s competitions secretary. Backtrack to the early ’60s, and a fresh-faced 20-something worked out of these very premises in a different role entirely, one that would see him propelled onto the front line as BMC’s Competitions Manager.

“My father Bill was a founding member of the Veteran Car Club and later its vice president,” he recalls with a smile. “I was always interested in cars and motor racing and in the early 1960s I became active in the Harrow Car Club. I was at a sprint meeting at Brands when I met up with Wilson McComb, then editor of the MG Car Club’s Safety Fast! magazine, and he invited me to visit the factory in Abingdon. When I got there, I was ushered straight into John Thornley’s office. John was general manager and a legend in MG circles. He was looking for someone to set up and run the Austin-Healey Club alongside the MG Car Club. He believed passionately that members of such organisations were the best advertisement for the marques, that their enthusiasm rubbed off on others.”

Browning landed the job, aged 24: “My office overlooked the BMC Competitions Department and out of my window I would see all these red-and-white cars – MGs, Big Healeys and Minis – coming and going. Lunchtimes were spent watching them being built, or chatting with the mechanics. Aside from organising events, I had also been fortunate enough to work with teams at Grand Prix level as a timekeeper, and Stuart Turner – who ran the BMC Competitions Department – asked me if I would do some timekeeping for its race entries. Stuart was so far ahead of the game as a team manager… it isn’t true, but I think I’m fair in saying that circuit racing didn’t really interest him.

“My first event with the team was the 1964Le Mans 24Hours, where we ran an MGB. We weren’t convinced that it would be fast enough to qualify so we asked MG’s chief designer Syd Enever to help us find more speed. Syd came up with a streamlined nosecone that he estimated would make our car good for 140mph on the Mulsanne. This being Syd, it was all done on the back of a fag packet and it worked brilliantly.” 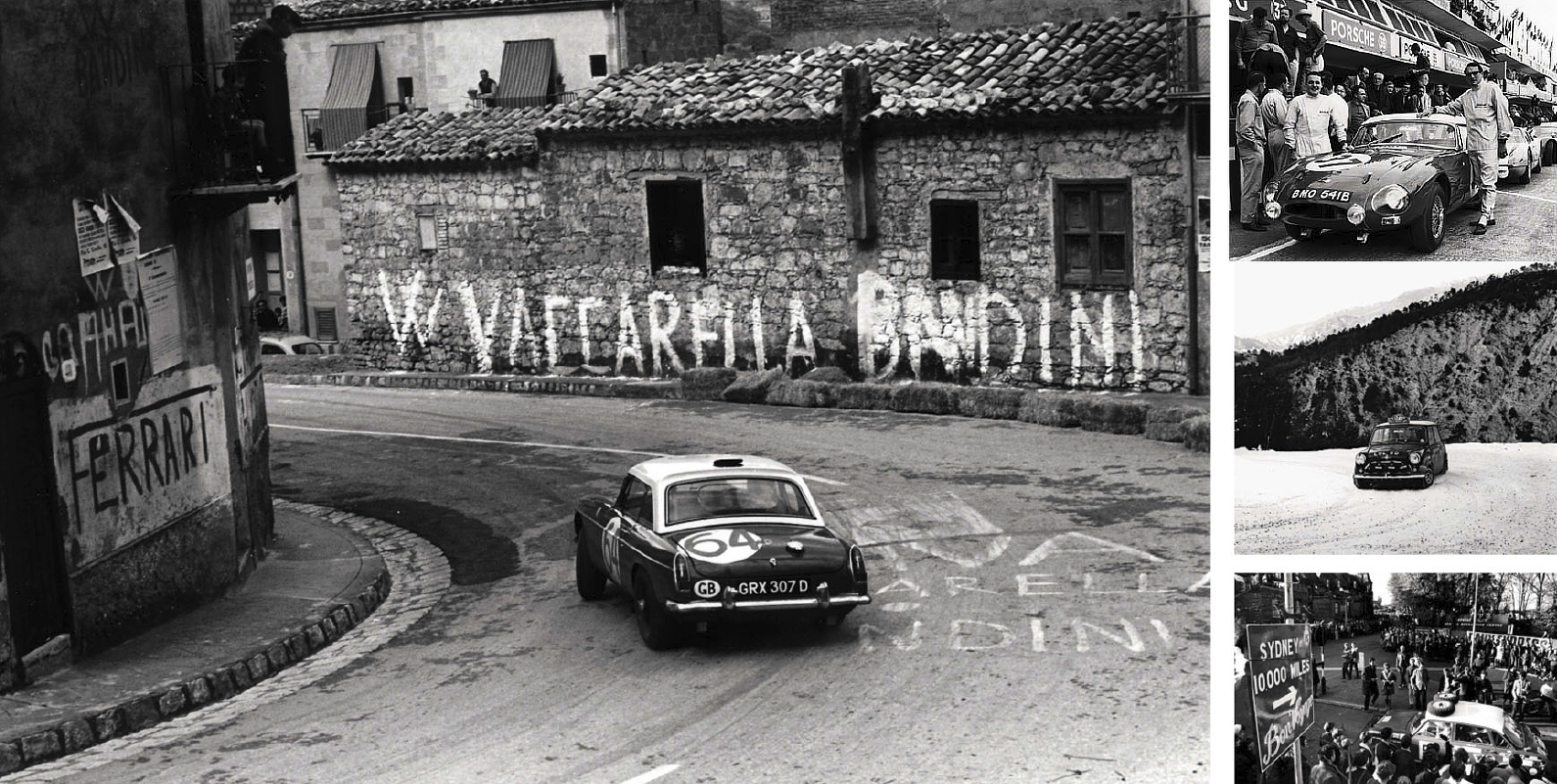 Browning would assist in future Le Mans bids, also tackling the Sebring 12 Hours and Targa Florio, events that brought with them unforeseen problems. “Scrutineering could be a bit unpredictable,” he explains. “On the ’66 Targa, the works Sprite was found to be underweight. Geoff Healey asked for it to be weighed again, and this time he stood with one foot on the weighbridge. That brought it up to the correct figure! That year we had an MGB for Timo Makinen and John Rhodes. We were informed that it couldn’t run without a front bumper; for some reason that contravened local regulations. We managed to borrow one from a spectator’s car. Then, in the race, John realised that the B was getting through a lot of oil and was unlikely to make it back to the pits. As John tells it, he didn’t know the Italian word for oil, but came into a village and spotted a large advert for Fina above a garage. He stopped and persuaded spectating mechanics to top up the ‘olio’.” They finished first in class and a remarkable ninth overall.

Then came the gruelling Marathon de la Route, which was in effect an 84-hour speed trial around the Nord and Sudschleife: “I don’t think Stuart could get his head around why anyone would want to spend four days pounding around the ’Ring, and he was even more dumbfounded when I phoned to say that we’d won!” Despite an off-road excursion on the first lap, Andrew Hedges and Julien Vernaeve completed an astonishing 5620 miles to finish ahead of Jacky Ickx and Gilbert Stapelaere in a Lotus Cortina.

In December 1966, Browning was made an offer that he couldn’t refuse: “Just before Christ-mas, I was summoned to John Thornley’s office where he sat me down and offered me a glass of sherry. He informed me that Stuart was leaving, and I was to take over as competitions manager. I told him that I couldn’t possibly, and that was the only time I ever had a disagreement with John. Of course, I lost the argument. I then moved over the road to the Competitions Department and squeezed in alongside Stuart in his tiny office. We would do the 1967 Monte- Carlo Rally together as the changeover event.

“Stuart went through the service schedule with me, which included refuelling points, a very detailed tyre-service plan and so on. He then asked me to go next door and make a copy, but I forgot to warm up the copying machine before-hand. There was a smell of burning before it chewed up and spat out the plan, which I then had to piece back together. It took me an age to work it all out. We desperately wanted to win the ’67 Monte to avenge the Mini’s disqualification from the previous year. Thanks in part to the right tyre choices and the work of the ice-note crews, Rauno Aaltonen and Henry Liddon won, which was the perfect send-off for Stuart.”

The season continued apace, with victories for Hopkirk on the Acropolis and Makinen the 1000 Lakes among others: “BMC was keen for us do something with the ‘Landcrab’. Tony Fall, who was a very good driver, had surprised everyone by winning that year’s Danube Rally in one and we got involved in a testing programme. That led to record attempts. We went to Monza where the car lapped like clockwork for a week, to the point that we took all the 2-litre endurance records at 92.8mph. The thing is, that wasn’t representative of what we could have achieved had we not phoned the press office with a day to go. We would have recorded an average of 98mph, but were told that no one would believe that so could we cut the speed to a more ‘realistic’ figure?” Despite record-breaking glory and seven rally wins in 1967 for the works Minis, black clouds were looming: “When I took over from Stuart, we were expected to win every event we entered.

I used to attend planning meetings that deter-mined how we would promote our inevitable success. Text for adverts would be written there and then, covering all permutations of overall and class wins, team awards and so on. Nobody questioned the likelihood of us not winning. The problem was, the Mini was nearing the end of its international career.” What’s more, in ’68 BMC merged with hitherto bitter rivals under the British Leyland banner and new boss of bosses Sir Donald Stokes wasn’t a motor-sport fan.

“In fairness,” Browning points out, “he did say I could have a look around the various divisions and see if there was anything with competition potential, but that was at a time when manufacturers were building-in homologation options at the design stage, which BL didn’t do. Stokes was looking at the bottom line and 40 people were involved on the ’68 Monte, travelling in a dozen vehicles and carrying 730 tyres and 550 gallons of fuel to 42 service points. That cost money. Unfortunately, we had to settle for third behind two works Porsches. Had there been more snow, I think it would have been another win for the Mini and that might have helped to stem the tide. As our European rally outings began to dry up, we got increasingly involved in circuit-racing Minis with John Rhodes and John Handley, and then the marathon rallies came along.

The P6 had potential, but P45s were on our desks by the time we got back to Abingdon.

“We pinned our hopes on the 1800 for the ’68 London to Sydney and Paddy Hopkirk finished just 6 mins down on Andrew Cowan after 10,000 miles of competition. I then had to explain to Stokes why the 1800 had finished second to a Hillman Hunter! The following year, we did the London to Mexico World Cup Rally and came second with the2.5PI. We’d had a 1-2-3 finish in class on the RAC with the Triumph, and Brian Culcheth did a great job, but there was no way he could stay with Hannu Mikkola’s Escort. I then had to explain why we’d finished second again.” There would be no final hurrah: “Based on the theory that there is no substitute for horsepower, I commissioned a Rover racer. Actually we built two, with 4.3-litre Traco-Oldsmobile power. We’d entered the July 1970 84 Hour Marathon de la Route with a Mini, so I thought, ‘Why don’t we take along a Rover as well?’ It came past us in the lead at the end of the first lap and there was nothing behind it. After 16 hours it was almost 60 miles in front. The boys [drivers Roy Pier- point, Roger Enever and Clive Baker] loved it. Then we had problems with the prop and retired the car. It clearly had potential but P45s were on our desks by the time we got back to Abingdon.” And thus the axe fell on the BMC Competitions Department. Browning would join Autocar as rallies special contributor before becoming the BRSCC’s executive director, but not before one final act of defiance: “Stokes couldn’t comprehend what we were trying to achieve, and never once visited Abingdon. His final instruction was to ensure that the Competitions Department’s records, build sheets and photo library were destroyed. Needless to say, the only thing that went in the bin was his instruction!”