1350hp is a figure that’s almost unimaginable in any motor, let alone a Kadett that remains street-legal. European Mentalism at its very finest!

There’s an old saying, propagated by a campaign of tyre adverts in the 1990s, that ‘power is nothing without control’. It’s a logical sentiment, and usually we’d fully agree with it: if you’ve turbo’d your Nova or thrown a V8 in your Calibra, it makes perfect sense to upgrade your suspension and your brakes, and have a good hard think about your tyre choice, in order to fully exploit the power at hand when you’re out and about on those late-night B-road blasts. Drag-racing, however, doesn’t have much of a grounding in logic. When the aim is as straightforward as getting from point A to the hazy point B a quarter-mile or eighth-mile away, and do so quicker than the guy in the other car, brute force matters above all else. So Dennis Andersson’s taken the concept to its logical conclusion here, essentially junking the very notion of ‘control’ and simply focusing on the power. 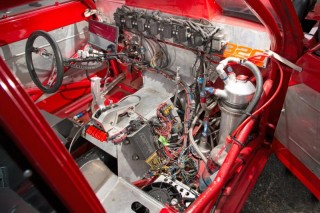 The result is 1,350bhp, and a bonkers Kadett that pulls double wheelies. “They’re becoming a trend,” Dennis laughs. What’s a double wheelie? Well, when he launches off the line, the front wheels rise into the air as he surges forward; as the wheels land and he shifts gear, the colossal power at hand causes the fronts to rise up once again. This means, as you might imagine, that the car’s a bit of a handful; search for videos of it online, you’ll see that it’s not uncommon for this Kadett to finish a drag run in the wrong lane, lurching haphazardly from left to right as the huge Hoosier slicks desperately scrabble for whatever grip’s available while also deploying Bugatti-shaming horsepower. It’s quite a spectacle. And that’s exactly what Dennis built this for: it’s ludicrously fast, terrifyingly so, and the added element of unpredictability is what keeps him howling with laughter from the Christmas tree right across the line and back to the pits. Dennis, you see, is just as bloody mad as his car is.

Before we start concerning ourselves with the state of this fella’s brain, however, let’s first consider the Kadett in question. You see, the Kadett name is one that’s been used on a bewilderingly vast array of models and variants over a 29-year span (from 1962-1991) – and of course there was the original Kadett of the late-1930s that debuted the name before being killed off by WW2. So which one are we looking at here? It’s a Kadett B, the generation built from 1965-1973, and it was a thoroughly diverse offering: you could buy it as a two-or four-door saloon, a three or five-door fastback, an estate, and two different coupés. Dennis’s car is a two-door saloon which, in a move of staggering grandeur by Opel, was marketed as the Kadett Limousine. There’s nothing especially limo-like about it, at least in the traditional sense, though it is quite a cool boast in the paddock! Poor little car, it never knew what was coming for it either. From the factory, the fieriest engine option available was the 89bhp 1.9-litre cam-in-head motor – although you’d be far more likely to find a humble 1.1 or 1.2. Suffice it to say that Dennis’s numbers are rather bigger than this!

DENNIS, YOU SEE, IS JUST AS BLOODY MAD AS HIS CAR! 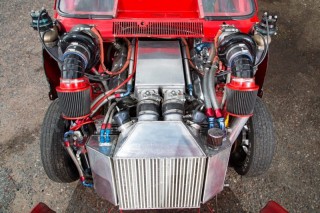 So where did the lunacy all stem from? “I started with a Buick pickup which me and my dad built,” he says. “It had an 800-horse Chevy big block with some extra nitrous.” Yeah, as story openers go, that’s right up there with Neil Armstrong and Usain Bolt in terms of devastating pub yarns.

Simultaneously humble and astounding. You can see why Dennis has race fuel in his veins. “It was pretty fast on the streets with its 1,300kg and 16-inch wide slicks,” he continues, “but it was long and light in the back, so I wanted something lighter and faster.”

A power-to-weight ratio akin to a LaFerrari proving to be nowhere near enough to satisfy Dennis’s loopy lust for thrust, he happened upon this Kadett in the classifieds and immediately saw the potential in the dinky little two-door. “It had a Volvo engine in it, and I knew right away that I wanted to do the impossible and fit a big Chevy V8,” he grins.

Impossible, of course, is merely a matter of perspective. In Dennis’s mind, the Kadett was the perfect choice with its short wheelbase – if he could only fit the engine. And he did have to find the right engine too; thankfully fate played a part in this and, feeding on his various other high-horsepower hijinks, presented the ideal solution: “I had blower in my boat, and nitrous in my previous race car, so I wanted to try turbocharging,” he explains. “I found this engine in the next town over, by coincidence, sitting in a race car that was for sale. At the time it was running 2,800bhp on methanol so I knew it would be strong enough; I had to downsize on the turbos and put a smaller camshaft in it, as well as building in some proper cooling, as I wanted to make it properly streetable. Because it was on the streets that I wanted to race and drive.”

That’s right. As if this all didn’t sound crazy enough, it was Dennis’s plan right from the outset to keep this thing street-legal, so that he could trundle down to the supermarket for a pint of milk after slaying his drag-racing opponents off the line. “The build started with putting big tyres and strong parts around it to try and make it handle on the streets – it took me a year to figure out the settings for the rear end,” he recalls. “After it was all built up and dialled in, it’s still always been fighting back both on the streets and the track… it’s definitely super-deadly on a cold, slippery street in Stockholm! Nine times out of ten it takes off with the front wheels in the air.”

Sounds like a riot for grocerygetting and urban chores, doesn’t it? Dennis assures us that the aim for the near future is to try a little re-engineering to get it launching without quite such extravagant wheelies and stretching the wheelie bars. All part of the fun though, isn’t it? “It’s very fast, but you always want to go faster,” he laughs, slightly more manically than is comfortable. “The car can run the eighth-mile in 4.91-seconds at 148mph – it’s a genuine four-second daily driver.”

And that’s what we love most about this Kadett: it stretches the function of the phrase ‘daily driver’ to an absurd degree. It takes a special kind of lunatic to use a 1,350bhp drag terror as his everyday runabout, and the thought of Dennis wrestling it away from the traffic lights and desperately trying not to bounce off parked cars is quite a mental image. A completely mad car, with an equally mad character behind the wheel.

You’ll no doubt be familiar with the LS family of Chevrolet V8s, which have been around for a fair while in a great many configurations: the LS2, for example, was the 6.0-litre unit found in various Corvettes and the Cadillac CTS-V, the LS3 was a 6.2-litre version for Corvettes and Camaros as well as the Vauxhall VRX8… so what’s an LSX? Well, it’s a full-race engine that uses the basic LS V8 architecture and irons out all of the road-car tolerances. Based on the 427ci (7.0-litre) LS7 block, it has forged pistons, lightweight rods, a lightened crank, and LSX-unique heads with hollowstem valves and reworked ports. And as you can see from the spec box, that was just a starting point for Dennis. Whereas the LS7 makes big numbers in nat-asp form, the LSX loves forced induction: Dennis is making 1,350bhp with his Precision 76mm turbos, and it’s not uncommon to see full-race (i.e. not street legal) LSX builds making twice that. It’s a crazy, crazy engine.