On track in a super-successful Alfa Romeo Alfasud SuperSud racer 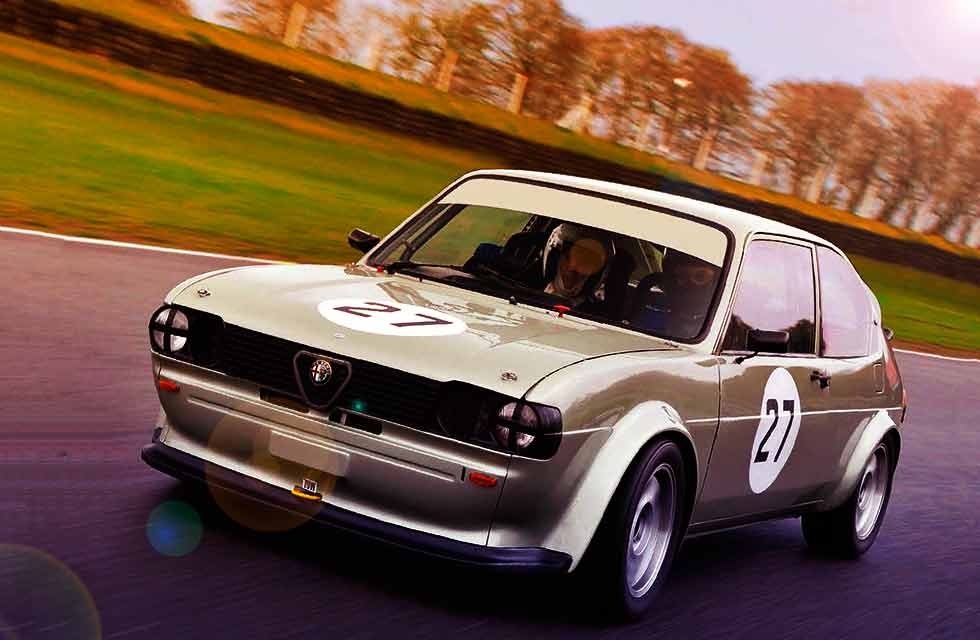 Alfa Supersud Racing Tearaway on track SuperSud. How do you create a championship-winning Alfasud racer? And how does it feel on track? We find out at Brands Hatch Words: Tim Pitt. Photos: Michael Ward.

On track in a super-successful Sud racer

You’re looking at one of the most successful racing Alfa Romeos in the UK. Ted Pearson’s Alfasud has a competition career spanning nearly 20 years, and enjoys near-mythical status among Alfisti. Its CV comprises 44 race wins, four class victories and two BRSCC Alfa Romeo Championships. We caught up with Ted and his recently-restored race car at Brands Hatch to learn more – and experience a few hot laps.

Ted has actually owned this Sud twice, having bought it back from friend and fellow racer Dave Thomas in 2009. Our story starts in 1983, though, when 17-yearold Ted first spotted the car near his Hertford home. “It was about six months old at the time,” he recalls, “and parked on the driveway of an elderly couple. The unusual colour – Metallic Verde Aqua – grabbed my attention first.”

“Despite the ‘SC 1.3’ badge on the tail, it actually has a 1.8-litre race engine built by Tom Shrubb”

Brimming with youthful brass, Ted traded in the family Mini, only opting to inform his parents afterwards. “Luckily, my dad fell for the Alfasud too,” he laughs. “I was supposed to pay him back in instalments, but he was far too lenient. It ended up becoming my 18th birthday present.”

The Sud’s quiet life of suburban anonymity wouldn’t last long. Its first on-track foray came at Goodwood in 1986, at the Alfa Romeo Owners’ Club sprint. “The car was still wearing Ceat tyres and completely standard,” says Ted. But that status quo didn’t last long. Soon afterwards, a set of Koni shocks arrived and the transformation from road car to racer began. Three years later, a very different Alfasud would join the grid for round one of the Alfa Romeo Championship.

It was a steep learning curve. In its first outing at Donington Park, Ted crossed the line seventh, followed by a DNF (did not finish) and a DNS (did not start) in races two and three. By round four at Cadwell Park, though, the Sud had claimed a season-best second place. And its halcyon days were just over the horizon.

The 1990 season kicked off with three straight race wins for Ted, and concluded with him claiming the class championship. In seven out of 12 races that year, the little green Sud passed the chequered flag first. In 1991, he went further, achieving 10 wins in 12 races – enough for another class victory and his first overall Alfa Romeo Championship (ARC). Then, in 1992, Ted destroyed allcomers, with 11 race wins (the 12th result was a second place), plus a third class trophy and second ARC title.

Having proved his point, Ted raced more sporadically in 1993 and 1994, then sold the car to Dave Thomas in 1996. “I got married, took out a mortgage and settled down,” he shrugs. But while Ted took (temporary) retirement, the plucky little Alfa returned to the racetrack. Driven by Dave, it claimed three second places in the 1997 championship, ending the year with a race win at Croft. Its winning ways continued in the 1998 season, with eight race victories and the car’s fourth ARC class title.

Dave continued racing until 2003, then put the Alfa – by now painted bright yellow – into storage. After Ted bought it back, he invested in a ‘no holds barred’ restoration that took two years. And in 2013, in its comeback race at Cadwell Park, the Sud once again finished first.

Hollywood couldn’t have scripted it better. Fast forward to a bustling pit lane at Brands Hatch. There’s a monster 720hp Skoda Yeti in the garage next door, plus a new Porsche 911 GT3 RS loitering outside, but the Auto Italia team only has eyes for Ted’s Alfa. Wide of wheelarch and squat of stance, it exudes all the tightly-packed aggression of a clenched fist. For those who already know its history, this feels like meeting a hero.

The true heroes of this story, of course, are Ted and Dave, both of whom are among the assembled throng. Very soon, Ted will take me out on-track, but first it’s time for a guided tour of the car. We start with the engine, which, despite the ‘SC 1.3’ badge on the tailgate, actually displaces 1.8 litres. It was built – then subsequently rebuilt – by Tom Shrubb at BLS Engineering, who has since retired but continues to work on the car. “It’s a race-spec eight-valver, with a custom crankshaft, pistons and rods,” reveals Ted.

A dyno figure of 180hp at 8400rpm means a round 100hp per litre: serious stuff for a naturally aspirated engine. “The downside is pretty much zero torque,” says Ted. “It totally relies on revs.” Using a five-speed Quaife straight-cut gearbox, Ted shifts up at 8000rpm when racing. “It’s gone beyond 10,000rpm when I’ve missed a gear, though,” admits Dave. Such highly-strung performance also means regular TLC; big-end bearings need replacing every 200-300 track miles.

Seeing the flat-four engine in situ, I’m struck by how low it’s mounted – almost skimming the concrete. Ted also points out the tubular, rose-jointed suspension and Quaife mechanical limited-slip diff. There’s nothing beneath the lift-off bonnet but the bare essentials for going fast, yet everything looks beautifully bespoke.

The bodywork, too, is part-custom, with a full-width glassfibre front splitter, stretched wheelarches and a rear spoiler – also glassfibre – that replicates the Series III Ti item. A centre-exit exhaust is cut into the rear bumper, the back box taking up the space previously occupied by the spare wheel. All windows are Perspex and the car rides on 15-inch Revolution alloys with Toyo Proxes R888 tyres. “They’re a road-legal track tyre, and amazingly hard-wearing,” Ted explains. “I’ve had the same set on here since 2012.”

Inside, there’s a slightly odd contrast of late-model Alfasud dashboard and Stack digital instruments. Everything else is pure race car, with a suede-wrapped Momo wheel, hard-shell Cobra Evolution Pro seats and Willans four-point harnesses. A brake bias valve is located aft of the gear lever and a fire extinguisher nestles in the footwell. I pull on a crash helmet, fold my frame through the FIA-spec rollcage and strap in.

Ted turns the key and the engine barks gruffly into life, the urgent blare of its exhaust bouncing off the narrow walls of the pitlane. We edge forward, wait for a thumbsup from a marshal, then explode onto the track. The whining, straight-cut gears are unabashedly uncouth, while the snarl of the frenetic four-pot vibrates through my torso. The car has been timed at 0-60mph in 4.6 seconds and, as we rocket towards Paddock Hill Bend, I can well believe it.

On a tightly-coiled track like Brands Hatch, the Sud feels in its element. Carving through corners with no body roll or palpable sense of inertia, it seems to have a molecular bond with the Tarmac. The brakes – AP Racing with four-pot callipers at the front – feel brutally effective in such a flyweight car, but it’s the amount of grip that most inspires awe. “You can really balance it on the throttle,” shouts Ted as we round Clark Curve onto the main straight. “The car talks to you constantly, so you know exactly what’s going on.”

Now Ted is in the zone, left arm punching through the gears and feet pumping the pedals. It’s fascinating to watch him at work: super-smooth, yet showing the Alfa no mercy as he calmly cuts through the field. Pretty soon we’ve dispatched that GT3 RS, along with several track-modified cars that make our 180hp output look modest. As a passenger, the whole experience is a workout for my internal organs: bracing and intoxicatingly intense.

As we dive back into the pit lane, a marshal beckons us to one side. Apparently the overrun pops from the Sud’s tailpipe are too loud, so we need to slow down. Ted decides to take a break, then try his luck again later. Clambering clumsily out of the car, I notice a wistful look flash across Dave’s face. “It’s still by far the best-balanced, most forgiving race car I’ve driven,” he says with a wry smile. “I should never have sold it.”

The Sud currently shares garage space with an Alfasud Trofeo racer and a 1968 Formula Ford single-seater, so track outings like this are relatively rare. And with so many memories tied up in the car, Ted understandably feels very protective towards it. To have experienced this famous machine in full flow, driven by the man who claimed so many of those 44 race wins, was a real privilege. For an Alfa fan, it doesn’t get much better.

Despite a modest power output of 180hp, the Sud is capable of dispatching supercars on track.

For a car company with something to celebrate, what better than a stickered-up special edition? That was Alfa’s thinking in 1982 when it launched the Sprint Veloce Trofeo, a limited edition that basked in the reflected glory of the Trofeo racer.

The official Alfasud Trofeo single-model series started in 1976, becoming Europe-wide the following year. It quickly gained popularity, attracting up-and-coming stars such as Gerhard Bergher and Ronnie Peterson. The Sud Ti 1300 was modified to race-readiness by Autodelta, with twin Webers and a custom exhaust boosting output from 79hp to 115hp. Further changes included a rollcage, lower and stiffer suspension, a jutting rear wing and wider wheelarches stretched over Campagnolo alloys.

The roadgoing Trofeo was somewhat tamer: based on the three-door Sprint Veloce, it had no mechanical mods. Its 1.5-litre, twin-carb four was shared with the Sud Ti and produced 95hp – good for a top speed of 109mph.

However, the Trofeo had aesthetic appeal in spades, with metallic silver (Grigio Nisida) paint and full-length blue/grey striping that kicked upwards into the rear spoiler. The same darker shade was applied to the centres of the multi-spoke alloys and, less obviously, across the full width of the B-pillar.

Lower-case ‘trofeo’ lettering cut into the stripe completed a classy overall look. Inside was a wood-rimmed steering wheel and gearknob, smart grey tweed trim, a Pioneer radio/cassette and Britax tilting glass sunroof. There was also a numbered plaque on the dashboard, although Alfa Romeo seems unsure – and archivists disagree – about how many cars were made. Most estimates are between 200 and 400; a tiny fraction of the 130,000 Sprints built. Only a handful of Trofeos survive today.