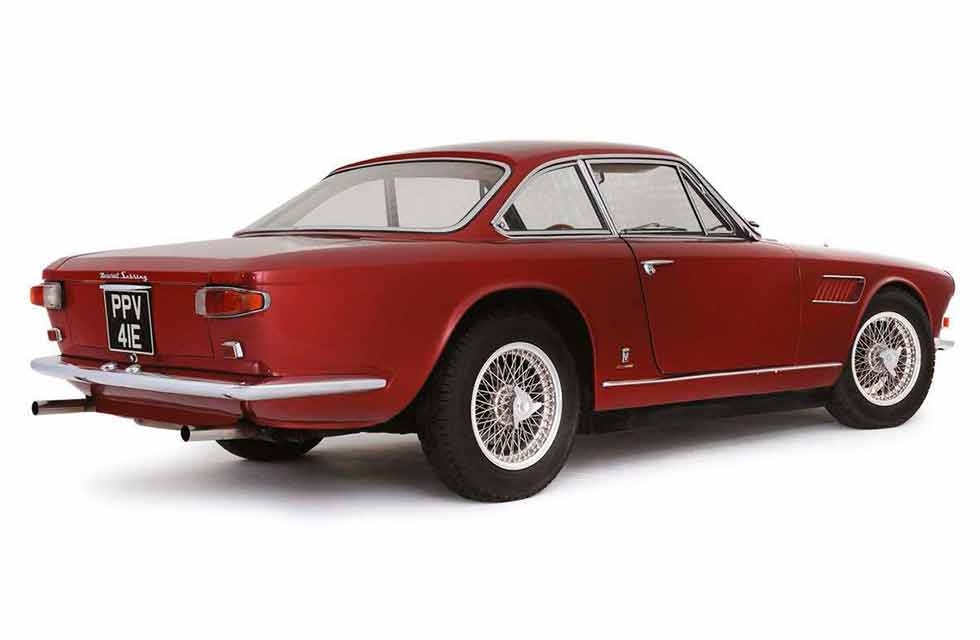 The Sebring was the last of Maserati’s fabled 3500GT line. Vignale’s understated shape has always left Chris Rees a bit cold; can a spirited drive change his mind? Story by Chris Rees. Photography by Michael Ward.

It’s time for me to make a frank admission. The Sebring has always been the least appealing classic Maserati for me. I know – sorry. It’s always seemed somehow unsexy. Dowdy, even. There’s something about the squared-off profile, the almost saloonstyle glasshouse and the peculiar front end treatment that felt ‘off’ to me. Not ugly – far from it – just not as pretty or as desirable as other Maseratis.

Deep down, I’ve always known that’s an unfair view. But there it is; it’s still a genuine feeling. If you don’t love a car, you don’t love it. I certainly understand why people do love the Sebring; but I never have done. But here’s the thing. Having spent some time with a superb specimen of Sebringhood, courtesy of Andy Heywood at McGrath Maserati, something has shifted. Having received an invitation to drive it to and from our photographic studio, it would have been churlish in the extreme to have refused a bash in a classic 1960s Maserati. After all, this is a model from the golden era, and an extremely rare one at that; when would I get such a chance again?

So I duly rocked up to McGrath’s Kimpton HQ to be presented with an immaculate burgundy car, a late model dating from 1967. I have to say, it does look good in a rather understated, classically reserved kind of way. In the flesh, am I coming around to how it looks?

The Sebring is part of the 3500GT family, or more specifically the 3500GTI, which I believe is the first car ever to be badged ‘GTI’. The Gran Turismo Iniezione (Grand Touring Injection) moniker was coined – as with its VW Golf GTI namesake over a decade later – in honour of its fuel injection system. Unlike Maserati’s grander 5000GT model, which was clothed by all manner of different coachbuilders, the 3500GT was essentially a model reserved for Carrozzeria Touring. Yes, there were one-offs by Frua and Bertone, but Touring was the sole coachbuilder of the series 3500GT coupe. It was a different story for the 1959 3500GT Spyder, though: Maserati turned to Alfredo Vignale’s styling house, which crafted an exceptionally pretty body open-roof on top of a slightly shorter wheelbase than the coupe.

Maserati had just introduced its 3500GTI coupe with fuel-injected power, and chose this moment to conjure up an alternative coupe: the 3500GTI S. The ‘S’ was originally conceived to stand for ‘Sport’ but switched to Sebring prior to launch. The new model’s shape – pretty much the last designed by Giovanni Michelotti for Vignale before he struck out on his own as an independent – was more angular and upright than Touring’s coupe, giving it a more solid, beefier look. It was based on the Spyder’s short-wheelbase chassis (2500mm versus the 2600mm of the 3500GT coupe), although its exterior dimensions were pretty much identical to the Touring coupe’s. The Sebring was bodied mostly in steel, with only the bonnet and bootlid in aluminium.

Why the name Sebring? It referred to the famous victory achieved by Juan Manuel Fangio and Jean Behra at Sebring in a 450S in 1957. Perhaps just as likely is the fact that the new model was targeted mostly at American customers, for whom the Sebring race track was an iconic institution.

Vignale built the Sebring prototype in late 1961 and, after some modifications requested by Maserati in early 1962, it was duly unveiled at the Geneva Motor Show in March 1962. The Sebring didn’t replace the Touring-bodied 3500GTI; at least not initially, for the two models remained on sale side-by-side until 1964. The Sebring was built at Vignale’s factory just outside Turin.

Exotic, racing-derived Lucas indirect fuel injection was standard equipment, which had benefits for both torque and overall performance. However, ironically the very feature that made these cars so exceptional has since been eradicated from many examples still on the road. When new, the Lucas fuel injection system had an unfortunate reputation for poor reliability. The pump needed high pressures to operate and, in hot conditions, caused vapour locks in the fuel passing through it. Many owners, especially in America, were tempted to replace the fuel injection system with more reliable Weber carburettors. Indeed ‘our’ car is so fitted, with triple Webers doing the fuelling duties.

The Sebring was fitted with a five-speed ZF manual gearbox or, as an option, Borg Warner automatic. This connected to a Salisbury live rear axle suspended by semi-elliptic leaf springs, while at the front were double wishbones and coil springs. Standard were Borrani disc wheels with aluminium rims and steel centres, which perhaps looked a bit dowdy. Even so, surprisingly few owners splashed out the extra cash to order optional Borrani wires, which do look much nicer. Other optional extras in period included air conditioning, tinted glass, special paintwork and a radio.

Autocar magazine tested a Sebring in 1963. Maserati claimed a maximum speed of 146mph for the model, and Autocar got pretty close, achieving 137mph; the magazine also recorded 0-60mph in 8.5 seconds.

1965 saw the arrival of the Sebring Series II – as featured here – which looks quite different in many areas. No doubt there was some influence on the shape from the then-new Maserati Quattroporte, which although designed by Frua, was built by Vignale. The front wings were reshaped, now accommodating different shaped surrounds for the double headlamps; the front grille was redesigned; the side/indicator lights were now larger wraparound units; the bonnet air vent was slimmer; new air intake vents were placed ahead of the windscreen; and new side vents were positioned higher up on the front wings. At the rear end were a smoother boot lid and horizontal rear light clusters (rather than vertical). Inside, instruments with anodised rims replaced chrome. Whether these changes were an advance is a subjective issue, but most enthusiasts tend to prefer the slightly more delicate Series I.

Perhaps the biggest change came under the bonnet, as the Series II could be had with a 3.7-litre engine (3694cc), achieved by lengthening the stroke from 100mm to 106mm; as a result of which power rose by 10hp to 245hp. Maserati also offered a 4.0- litre engine with a 110mm stroke and a 255hp power output. You could even buy a Series 2 car with a 3.5-litre engine if you wished.

Some 348 Series I cars were built between 1962 and 1965, followed by 243 examples of the Series II. By the end of the road in 1967, the distinctly 1950s charms of the Sebring had been eclipsed by the newer Mistral. Fewer than 600 Sebrings were made in all, making it a very rare classic – and certainly a lot rarer than the Touring-bodied 3500GT, of which around 1970 coupes were made, plus 242 Spyders.

So here I am: about to pilot the Sebring. On climbing aboard, first impressions are that this is a spacious car, at least for two; the two rear seats are rather tight. Indeed, legroom is verging on zero if the front seats are occupied by tall passengers. The dashboard is a bit all over the place ergonomically, but that’s par for the course for cars from the 1960s.

Time to fire up the 3.7-litre straight-six. Since ‘our’ car has triple Weber carbs, we don’t need to go through the cold-start rigmarole that you need to do with the fuel-injected engine, which Andy Heywood of McGrath Maserati explains thus: “Pull the choke out and don’t touch the throttle. Turn on the ignition and wait for the fuel pump to quieten. Start the engine and, once fired up, work on getting the choke in as quickly as possible. Leaving it out will overfuel and oil the plugs.” Then there’s hot starting: “Lay your foot on throttle, with no choke applied. Turn the engine over and when it fires, catch it on the throttle.” Simples…

The Sebring’s engine does warm up pretty quickly and settles into a gentle purr, albeit with a certain lumpiness from the triple Webers. Ah, the gearbox still hasn’t warmed up yet. Yes, it too needs warming, since second gear can be awkward to engage when cold. Luckily there’s plenty of torque to allow you to skip a gear, until it’s all hot enough to allow smooth changes. The sound from the engine bay is truly lovely: a rangy soundtrack that recalls a fine orchestra tuning up, perhaps. Throttle response is crisp, thanks in part to the rod linkage, and performance is brisk, even by modern standards.

This is such a comfortable cruising machine, perfectly at home on the motorway. On my journey over fast A-roads, it was in its element. Sharp corners present some amusement, as the steering is fiendishly heavy. Since the front springs are somewhat soft, braking for corners produces noticeable pitch, which in turn affects the steering feel. Understeer is the order of the day; but if you need to correct the car mid-corner and lift off the throttle, the stiff leaf springs at the back can quickly turn things to snap oversteer. Cornering is thus an art form; learning the Sebring’s ways takes practice, but once mastered it’s a joy, and you can drift the car on its narrow 185-section tyres with ease.

I have to say, at the end of my time with the Sebring, I’d been genuinely seduced by its subtle charms. Not only did I start appreciating its restrained lines in the comfort of our photographic studio, I felt a great warmth for its alluring combination of superb semi-race- spec engine, idiosyncratic cabin and touring comfort. All in all, a lovely machine.

The straight-six engine in our Series 2 car has been retrospectively fitted with triple Weber carbs. Sebring cabin looks and feels fantastic, even if the ergonomics and switchgear are a bit scattergun. Understated to the point of sobriety, the Sebring’s shape was one of Michelotti’s last for Vignale.