THE NUMBERS NUMBERS GAME  Drift V12 W202 If it’s what’s on the inside that counts then there’s not a lot in here… oh, except a massive turbo!

If you’re of a suitable age to have been playing car Top Trumps around 20 years ago, there’s a high chance you’d have had the same jaw-dropping reaction as me when stumbling upon the Dodge Viper in the pack. 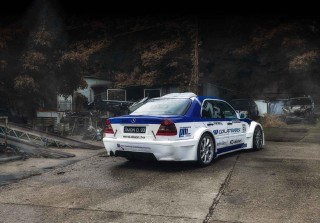 You see, back when we were eleven and numbers meant everything, nothing came close to touching the figures this Yank brute’s gargantuan 8.4-litre V10 truck engine could boast. 8.4 litres! It’s little wonder that this slice of US muscle went on to feature on so many teenage bedroom posters. Right next to that white Countach! A couple of decades on, and most of us have had to come to terms with the fact that we’ll probably never see an engine so monstrously large in a new car again. But that’s why we love the more retro offerings out there, modern-day cars may be opting for smaller, more polar bear-friendly lumps but we can always look to the past. Besides, none of us have fully suppressed those big-number urges, eh?

Step in our Hungarian knight in shining armour, Olivér Ámon. He’s one man who’s very much keeping the huge-engine dream alive with his latest motorsport project. It may look like a fairly mad mid-sized Nineties saloon from the outside, but peel away that bodywork and you’ll see that the inside is even more bonkers!

It all began around six years ago when young Olivér took the jump from go karting (which he’d aced at for several years) to the up-and-coming gymkhana league – effectively small, technical time trials where drifting is very much encouraged as part of the spectacle. Forming part of the original crew that helped get this exciting motorsport established in his home country, the first step was to select a suitable vehicle to pilot around the twisty courses. While his peers began snapping up the obvious choices such as compact rear-drive Japanese coupés, Olivér decided to make use of the completely blank canvas laid out before him by opting for something a little more memorable… 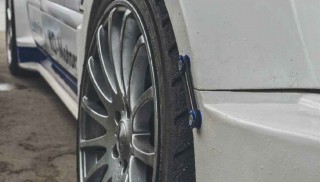 “I bought a W140 Mercedes-Benz S600,” he proudly recalls. This monstrous, long-wheel- base saloon is more commonly seen wafting important diplomats around capital cities, and would clearly act as a bit of a handicap around the gymkhana courses due to its hefty size and weight, but it did rock a massive 6.0-litre V12 motor, and looked completely badass too, obviously. “The spectators soon loved the car more than all of the others, and can you blame them? Surely everyone wants to see a S-Class drifting!”

Olivér continued to entertain the crowds in his completely gutted super-barge for a couple of years, with none of the other cars coming close in terms of classy looks or killer soundtrack. But it was becoming apparent that he’d need to switch up his choice of vehicle if he ever wanted to place anywhere respectable on the leaderboard. “I wanted to keep that exclusive Mercedes feel, though,” he explains. And with that a rather ingenious idea soon hatched with the potential to leave him with all of that first-class grunt, but in a much smaller, lighter package.

The plan went something like this: take the V12 lump from his S-Class and somehow try and wedge it into the car’s smaller sibling, the W202 C-Class from the same era. With the largest engine fitted from the factory into a W202 chassis being around two litres, and being a whole four cylinders less, it wasn’t a job that would be happening overnight. “The effort it took in the end was far higher than even I had dreamt of.” Olivér says. 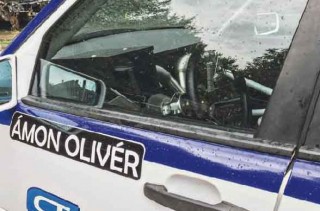 First up was working out just how to get this hunk of aluminium to physically fit under the C-Class bonnet. “We ended up relocating the whole firewall a few inches back in the end,” he modestly reveals. It clearly wasn’t a job for the faint of heart, that’s for sure. Before the block was offered up, Olivér was also tasked with sourcing a manual gearbox that would be up to the task of dealing with such a large amount of torque. He eventually settled on a six-speed affair from a more modern diesel-powered BMW. This was in turn beefed up with a ceramic clutch, before being connected to the donor S-Class’ rear differential. By this stage the diff in question had already been welded closed for optimum skidding action.

But Olivér and his friends weren’t stopping there. Seeing as this was going to be such a one-off build, they thought they may as well go completely all-out by adding some boost into the dozen-cylinder package. Taking a leaf out of the Dodge Viper’s book, this part was sourced from a truck too – an enormous GT45 blower that would match the equally-as-large engine it would be attached to. With not an inch to spare under the bonnet, both the intercooler and turbocharger are, quite ingeniously, housed inside the car now. You’ll find them right where the back seats once lived. The beautifully fabricated boost pipes that subsequently worm their way around the driver and through the dash only add to the visual drama inside.

Using a hybrid C-Class and S-Class wiring loom and tuned up with a VEMS standalone ECU unit, Olivér now has around 630bhp and 660lb ft of torque his disposal. It’s a relatively safe state of tune too. The big old V12 hardly even breaks a sweat. That’s not to say it isn’t an absurdly large power figure for a modestlysized family saloon. “It lights up the rear tyres at the touch of the throttle pedal,” Olivér grins, which sounds perfect for the gymkhana-based sideways action it’s used for if you ask us. 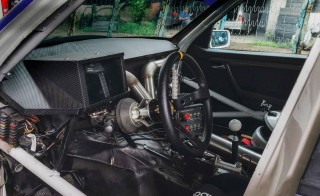 The chassis is a custom combination of sturdy Mercedes bits and various aftermarket performance parts, all designed to keep things as controllable as possible. The crossmember, steering rack, hubs and big four-pot brake system all come courtesy of the more modern W220 S-Class, and have so far proven more than enough on the circuit. Some D2 Racing adjustable coilovers have also done a great job of getting the car smoothly around the corners… well, when it’s not sideways.

Dubbed the ‘C600’ – a model that Mercedes never officially made (but probably should have – Midge), Olivér’s taken one of his favourite compact, light saloons and fitted it with the mother of all engines from the entire range at that time. In the recent months since completion, the car’s understandably gone on to receive a lot of attention and awards globally.

Especially as Olivér’s incredible skills are now backed with a soundtrack that takes a dollop of classic Ferrari and laces it with the whooshing urgency of a Japanese tuner car. So great is the success in fact, that he’s gone onto develop his very own racing team, Markom Racing, to help sign and train more talented young drivers. The main lesson we can take away from this incredibly cool piece of motorsport engineering though, is a classic one – sometimes bigger really is better!

Resembling a BTCC touring car from the era when it was conceived, the livery-adorned bodywork of Olivér’s saloon features seamlessly-blended wide-arch extensions to house the much wider wheels and tyres now needed. These arches are finished off with wider bumpers and a bulging fibreglass bonnet. All the panels are attached with quick-release Epman fastenings, just in case Olivér has a prang during any of his events. Just another thing that puts the class in this C-Class! 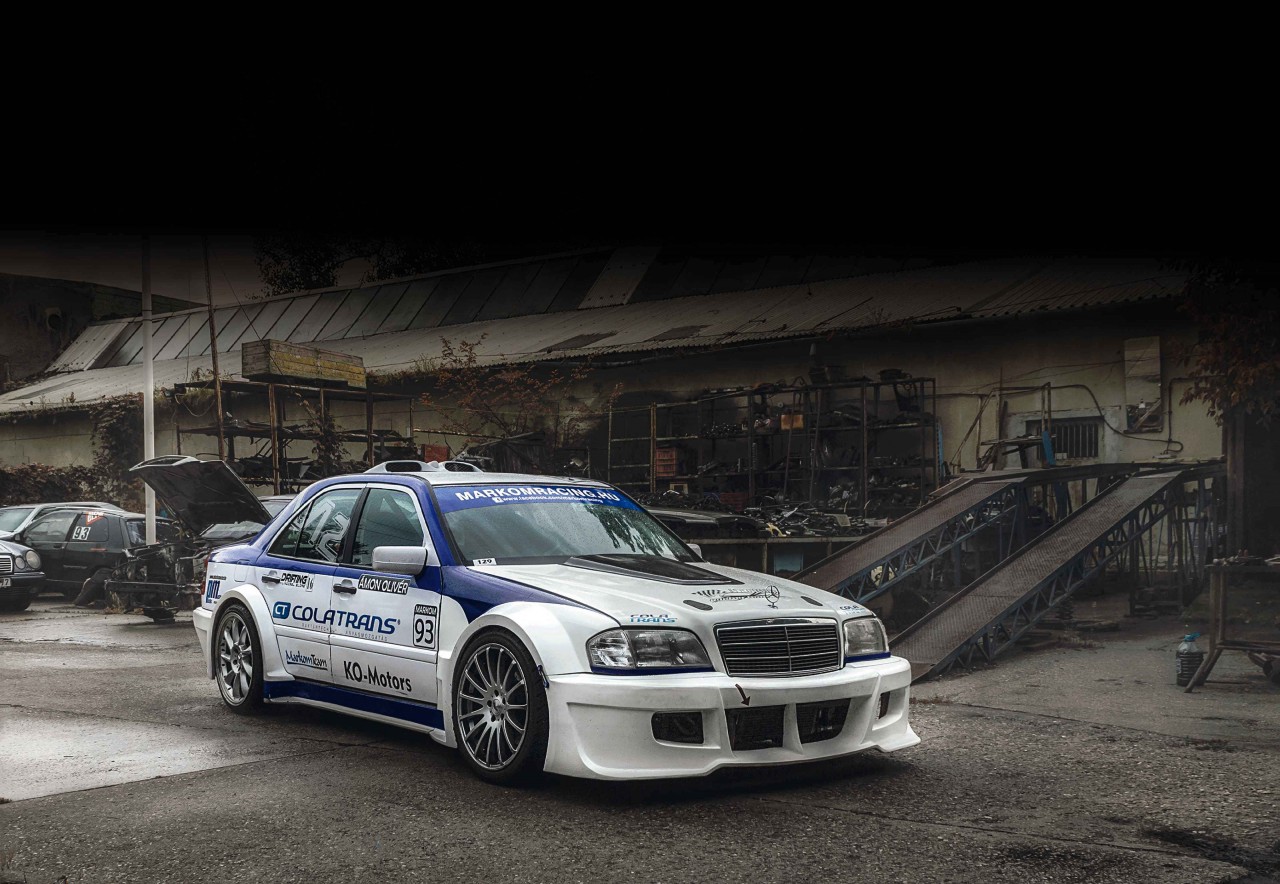 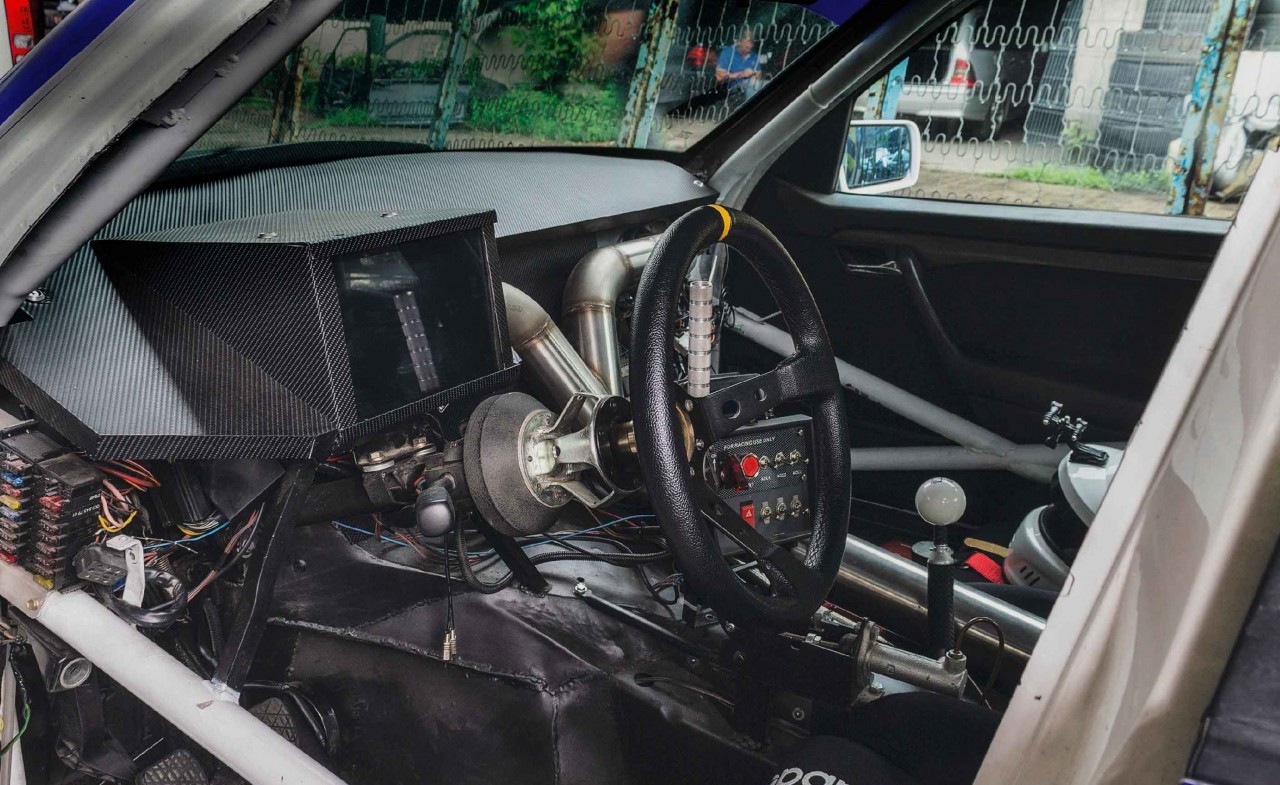 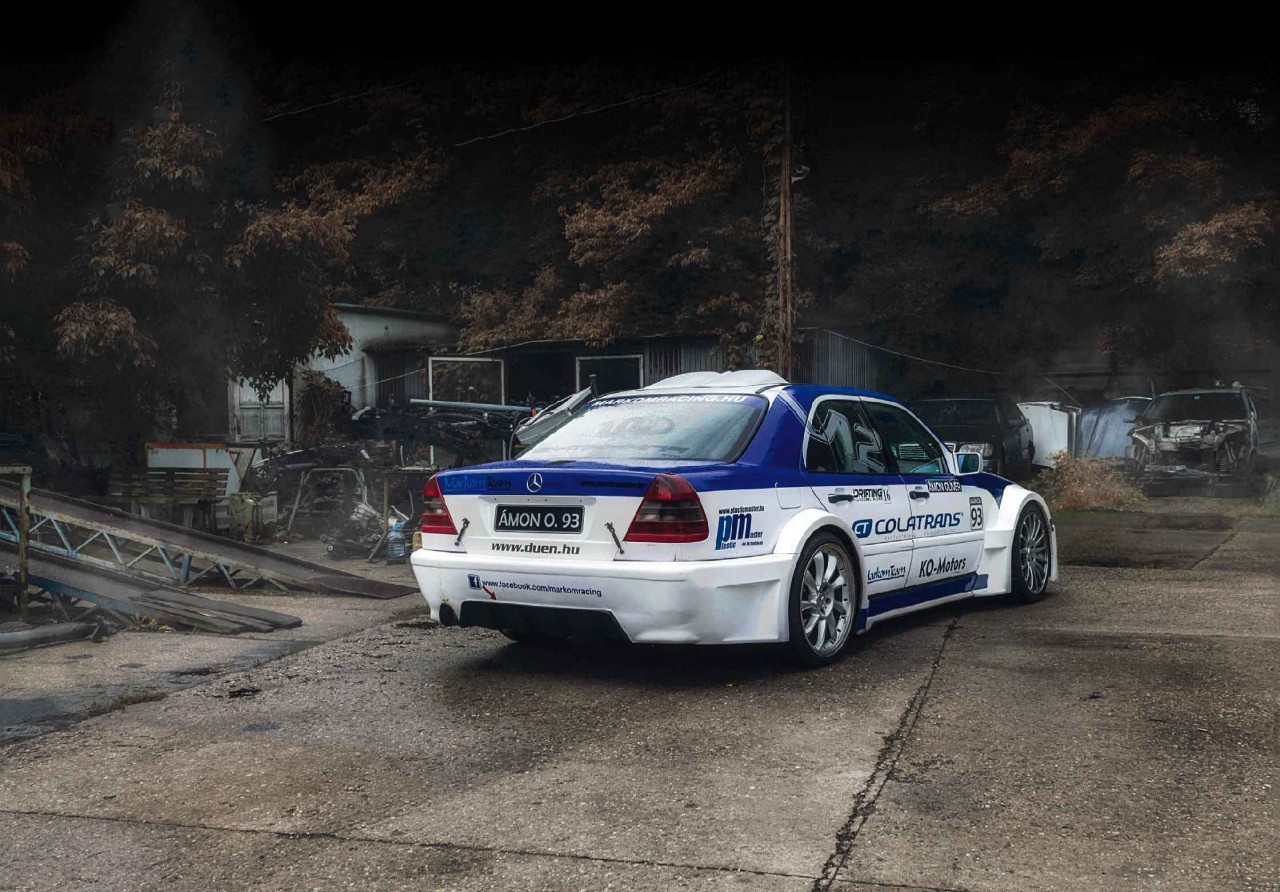 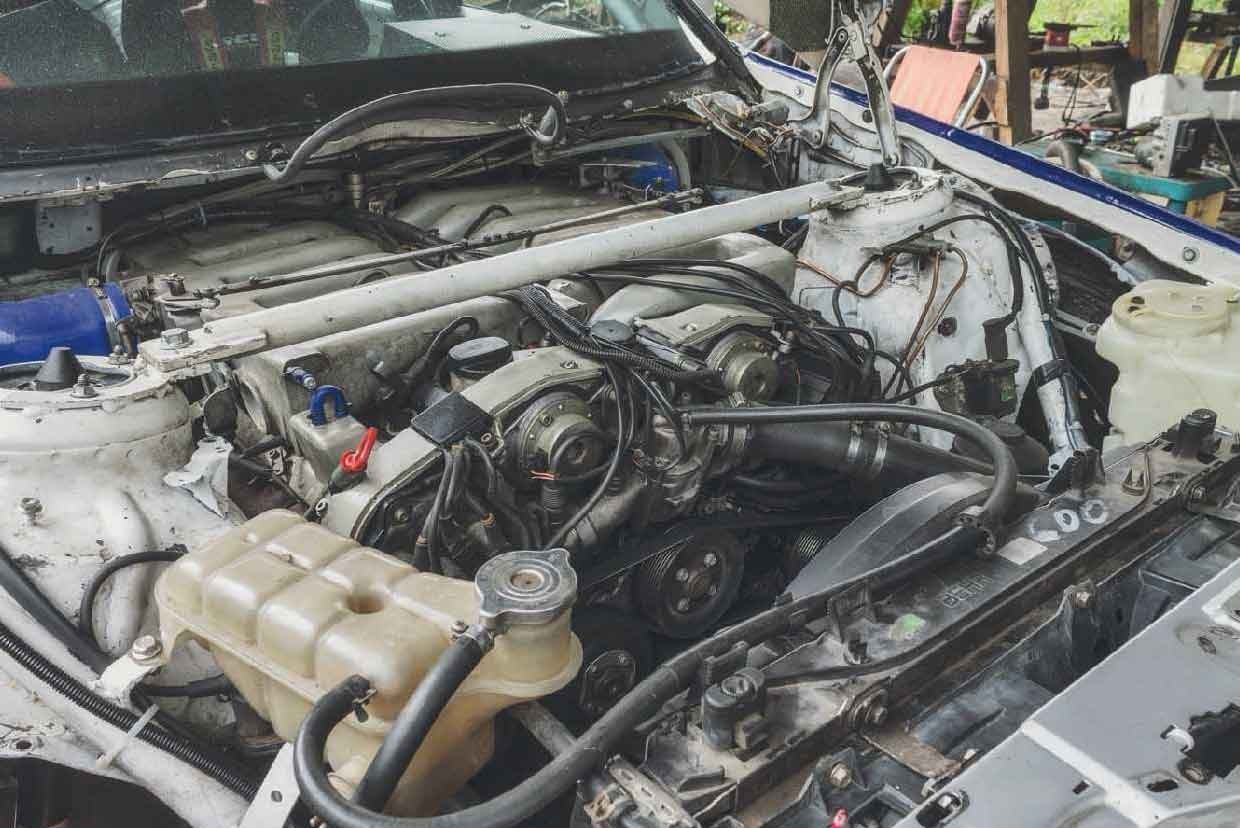 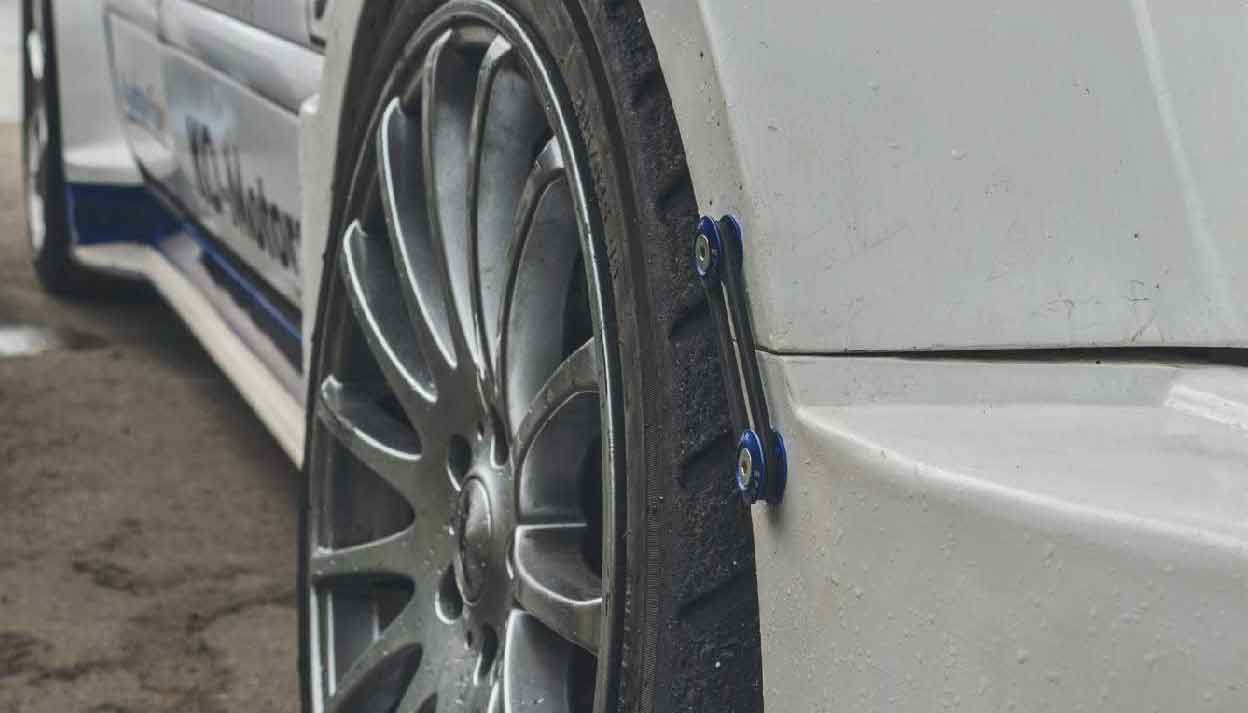 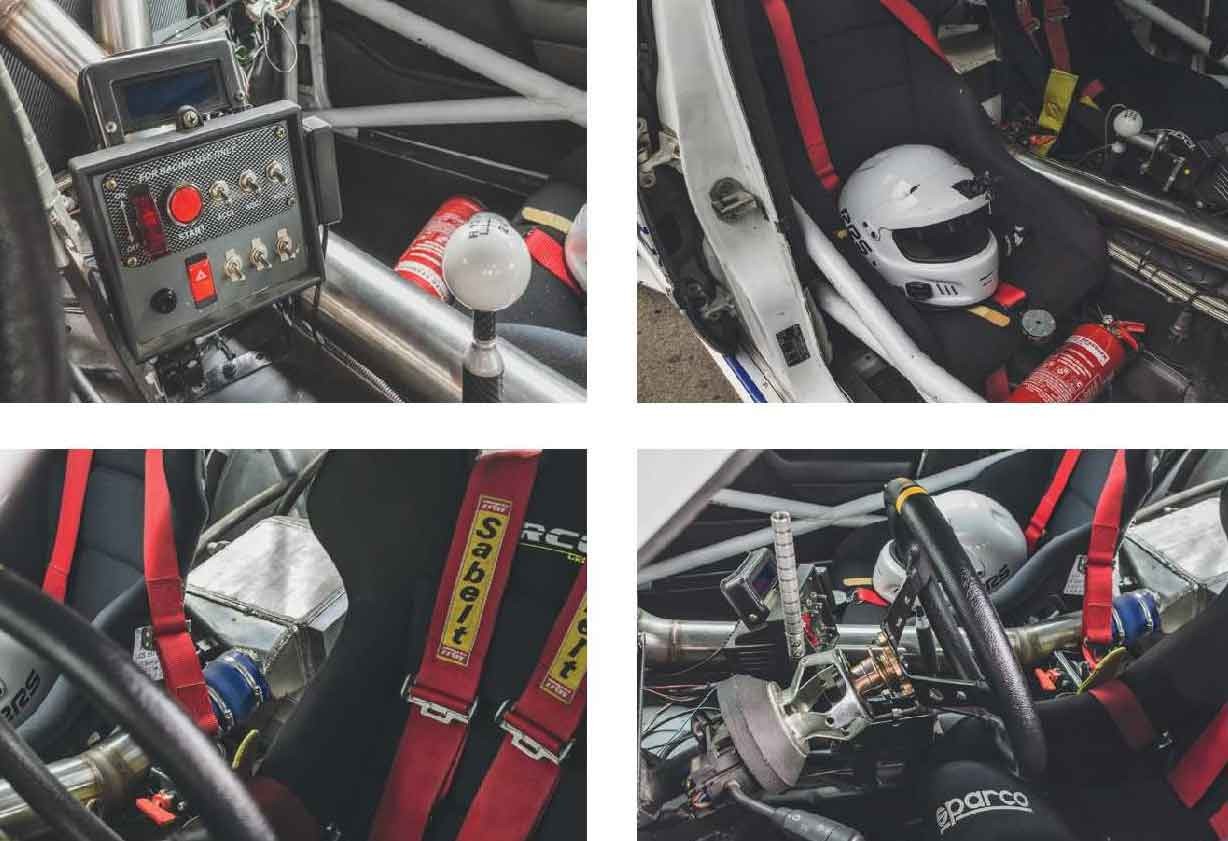 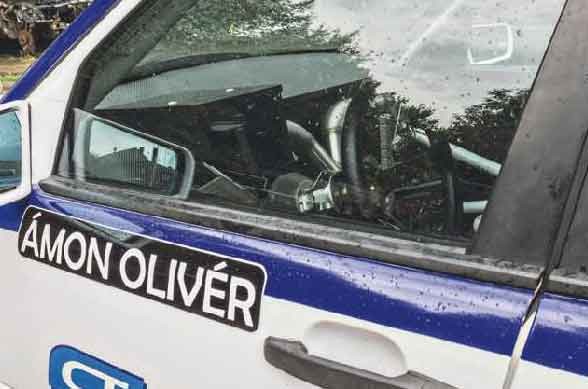 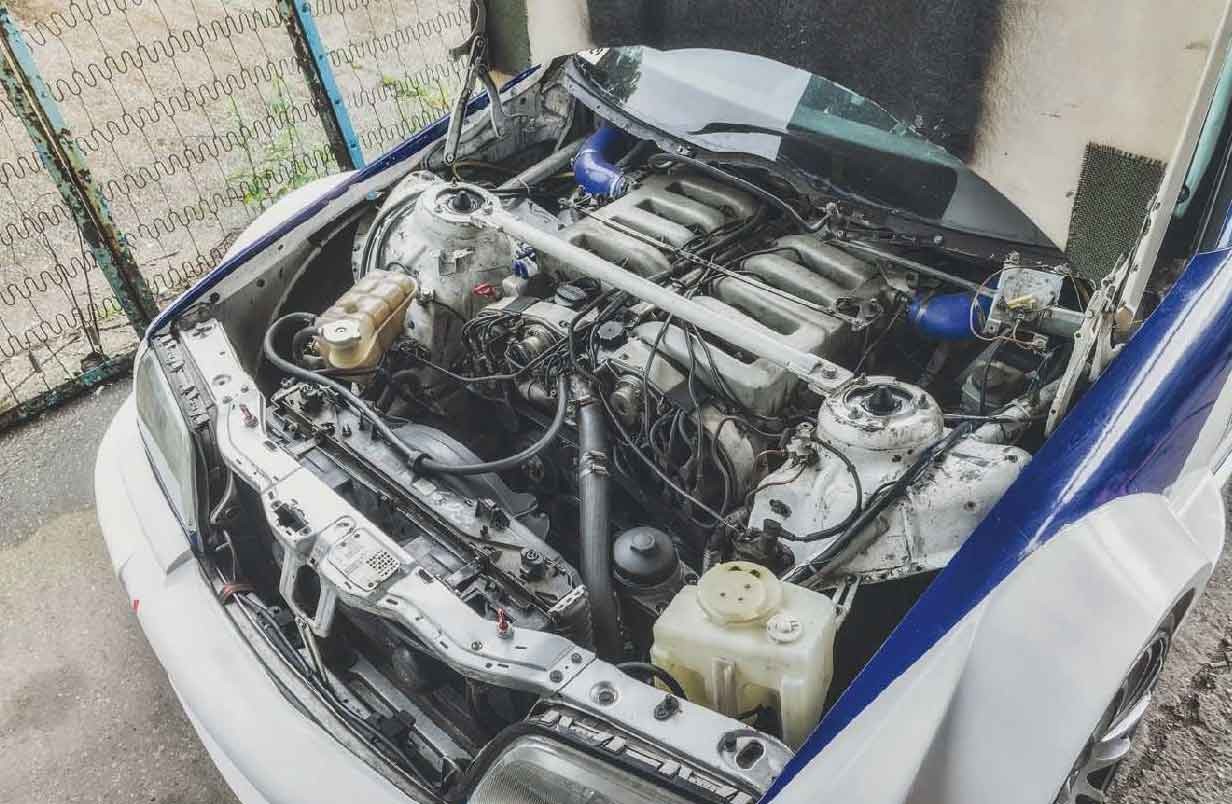 “First up was working out just how to get this hunk of aluminium to physically fit under the C-Class bonnet.”