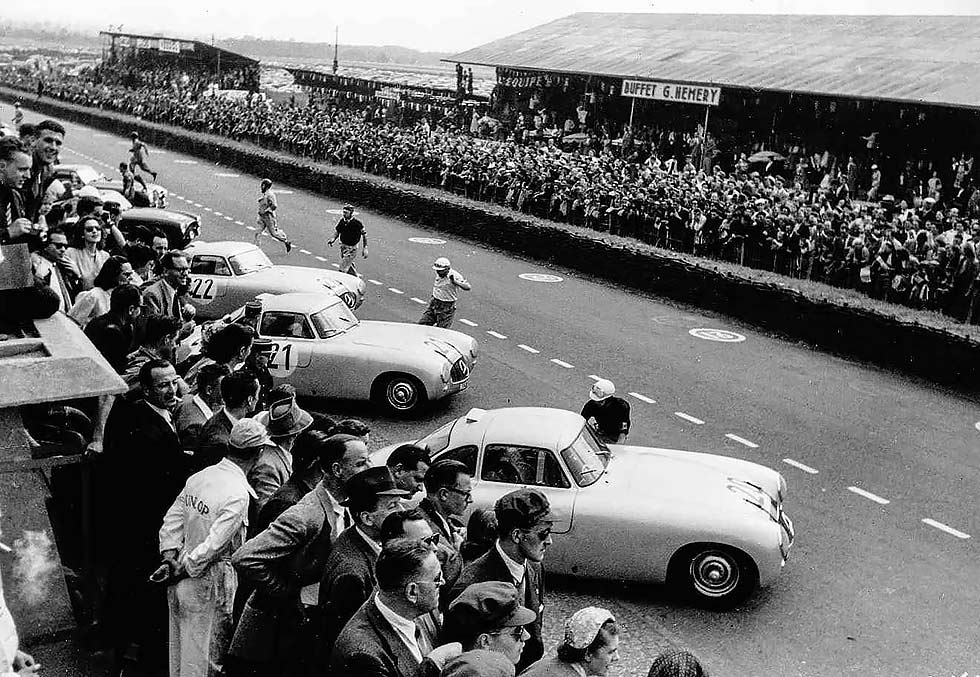 Soaring Away. The 300SL Gullwing evolved from a purebred racer – but the road car was very successful in competition, too. Words Delwyn Mallett. Archive photographs Daimler AG.

Top and facing page. Drivers run to their cars for the traditional Le Mans start in 1952, as yet unaware that the two 300SLs in the foreground, nos 20 and 21, will finish second and first overall respectively; car 21 blasts around the circuit en route to victory.

The Mercedes-Benz 300SL (for Sports Leicht) was conceived in 1951 as a stop-gap racer to carry the factory’s banner while it prepared to re-enter Grand Prix racing in the 1954 season. Utilising engine and mechanical components from the newly introduced 300 saloon, head of the racing and experimental department, Rudi Uhlenhaut, conceived a light but exceptionally strong tubular spaceframe upon which to hang the mechanicals.

A slippery coupé body, with a Cd of only 0.25, was draped over the frame but its geometry made no allowance for doors. As a consequence the first cars had ‘hatches’ in the roof, hinged at the centre line, through which entry was rather clumsily gained. Although these were oddly positioned as doors, their dimensions did in fact comply with race regulations, but protests by Italian and French authorities prompted a slight redesign of the frame so that the hatches could be extended downwards, taking on the shape of a gull’s wing. A description soon universally adopted. 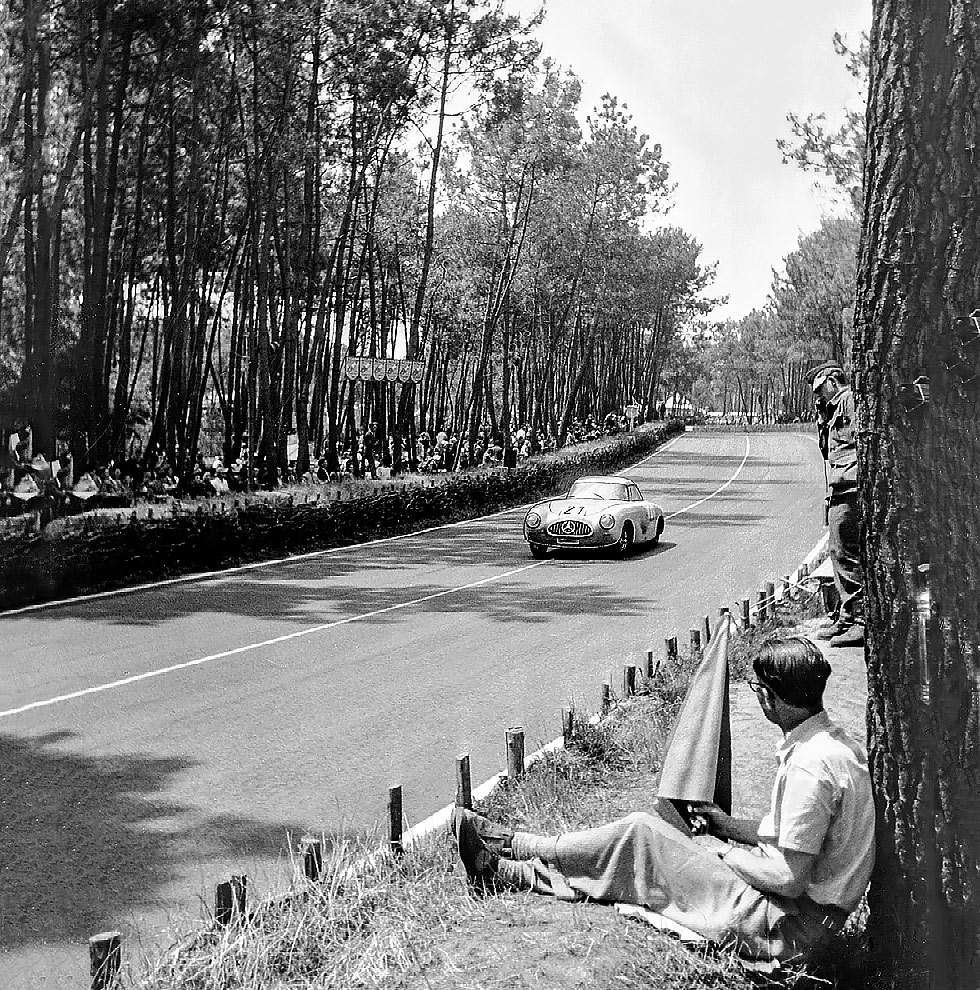 The 300SL’s first race was the 1952 Mille Miglia, where Karl Kling finished second to a Ferrari and the great pre-war ace Rudi Caracciola came fourth.

The next outing was a sports car race in Berne, supporting the Swiss Grand Prix. Four cars were entered, each, for the first and only time, painted a different colour. They filled the top three spots but a locking rear brake caused Caracciola to crash heavily, finally ending his racing career.

The Le Mans 24 Hours, ‘the most famous race in the world’, was a test of stamina passed with flying colours. 300SLs finished first and second in the pairings of Hermann Lang and Fritz Reiss, followed by Theo Helfrich and Helmut Niedermayr, respectively.

For the next event, a 142-mile sprint around the tortuous Nürburgring, the four-car team had their wings clipped, so to speak, in that they were fitted with lighter open-roadster bodies. In the absence of serious competition they again romped home first and second.

Coupé bodies reinstated, the year was rounded off with a hard-fought victory in the gruelling 2000-mile Carrera Panamericana road race through Mexico. Sounding more like a music hall variety act, Kling and Klenk (Karl and Hans) won the race, despite a buzzard bursting through the screen at around 135mph and stunning Klenk. Hermann Lang finished in second place.

Mercedes was back, and victorious 300SLs were retired from competition as efforts focused on the Grand Prix cars.

Heavier than its predecessor but also more powerful, the road-going 300SL arrived in time for the 1955 season and was soon mixing it with Ferraris and Alfa Romeos in the Grand Touring categories. Although the Mercedes factory never entered works cars, it offered generous support to its many private owners.

Frequently overlooked in the light of Moss and Jenks’ record-breaking 1955 Mille Miglia victory in the 300SLR is John Fitch’s fifth place overall and win in the GT category.

The Grand Touring category was even more hotly contested in 1956. Another victory came in the Liège-Rome-Liège Rally, this time for Willy Mairesse. The Acropolis and Sestriere rallies fell to the SL, and Stirling Moss brought one home second in the Tour de France.

In the USA, which was the Gullwing’s most important market, Paul O’Shea won the Sports Car Club of America Production Class D championship in 1955 and 1956, with Class C victory going to Harry Carter in 1957.

Inevitably, with no further development by the factory, the magnificent Mercedes 300SL was gradually outclassed as the field moved on. But what a legacy it left behind.

Clockwise from above left. Roadgoing SLs dominated rallying in the mid-50s: here is Gendebien on the 1955 Liège-Rome-Liège; Mairesse on his way to winning the 1956 Liège; and Shock taking victory on a snowy 1956 Rallye del Sestriere.