In an era when no Ferrari model had exceeded 100 units, Mercedes produced 1400 Gullwings, which was a huge achievement for something so exotic, and so exotically priced. Today there are around 800 survivors and, in a market where broadly 10% of stock turns over each year, the trading volume provides a great barometer of the investment-grade segment. Buyers and sellers like this too, as it means that market movements are more visible than with other, rarer cars of similar value.

But there’s more to it than that. All Gullwing road cars are essentially the same thing, with no ‘significant’ developments or upgrades during their production cycle. That’s not so with the 300SL Roadster, which was upgraded with an alloy block and all-round disc brakes. These variations have an affect on value and desirability, but with the Gullwing there are no such distinctions.

Compare the Gullwing, too, with the Ferrari 275 GTB. Although nearly 800 of those were produced there are myriad permutations – two-cam, four-cam, six-carb, long-nose, shortnose, steel body, alloy – and there are wide variations in value between them.

With the Gullwing it’s down to the constants of condition, provenance, matching numbers, originality, and ultra-low mileage… More or less. Moreover, there’s greater transparency than with Ferraris. The Classic Department of Mercedes-Benz helped publish Eric Les Moines’ Register book, placing chassis numbers and ownership details in the public domain. The scholarship is there at your fingertips.

So what does the Gullwing tell us? Like virtually every other supercar, the Miura, F40, Porsche 959 and McLaren F1 included, the Gullwing passed through a used-car phase when it was worth a fraction of its original purchase price. There could be a lesson in that history for those interested in modern out-of-the- box ‘investments’.

Yet, for all that, there’s still complexity. Chassis frames, engines and other parts were available from Mercedes-Benz after production ceased. There are made-up cars out there, fakes even. But with diligence, and thanks to the published research, buyers stand a good chance of being able to inform themselves. It also helps market analysts get behind the 30% variation in price points for superficially similar assets that aren’t, and filter out those that are not representative.

Neither is the Gullwing an actual measure of its market segment. It’s a Mercedes, which has its own particular marque dynamics. Nevertheless, as a barometer it’s one heck of a useful tool, even if its swing-axle rear made it tricky on the limit. I forgot I wasn’t supposed to talk about it as a car. That’s beyond my remit.

In 1954 the new Gullwing was priced at £4392 in the UK, exactly the same sum that would have bought a factory-bodied Bentley R-Type saloon. As Ferraris were not yet ‘production’ cars, so not list-priced in the UK, the only way to spend more was on a coach-built Rolls or Bentley, topping out at £7041. Cheapest car in Britain was the Ford Popular at £390. So much for context. For more meaningful price/performance comparison, an Aston Martin DB3S was £3684, just £20 more than a D-type Jaguar, with a Jaguar XK140 fixed-head at £1616. A Porsche 550 Spyder would have set you back £3847.

It took until the early 2000s for values to surpass their previous peak. In 2012, most examples in open trading were changing hands for under £550,000. Today, better cars are exceeding £1 million. However, at auction there are also less exceptional cars trading at under £700,000. At the top end, for an early car with hero racing-driver associations, you can talk £2m and up.

Below. ‘Performance ahead’ is the slogan on this ’50s brochure – and that’s certainly been true of Gullwing values. 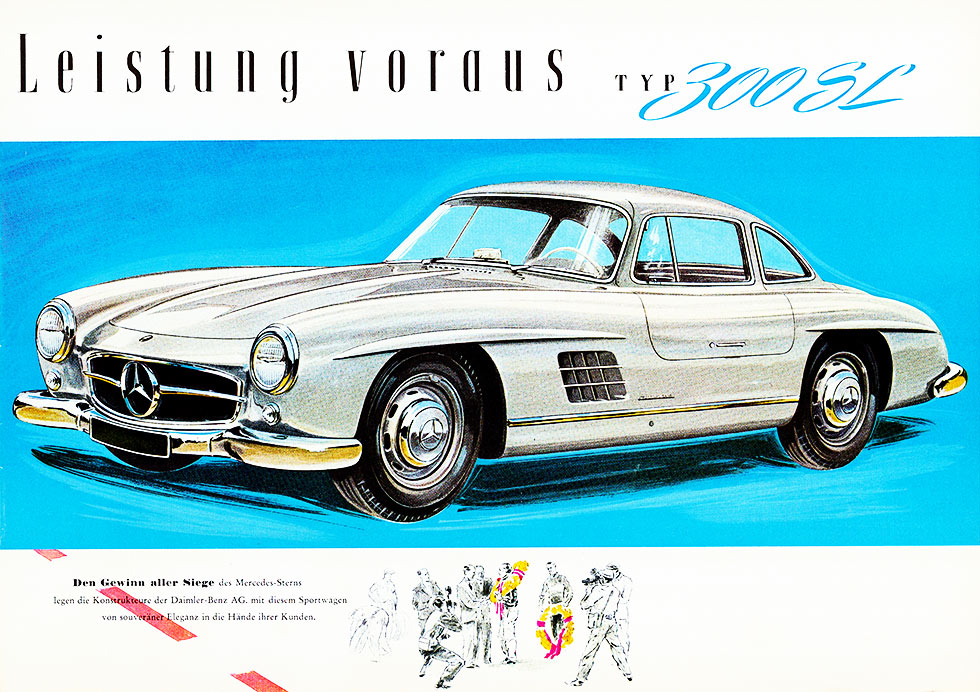