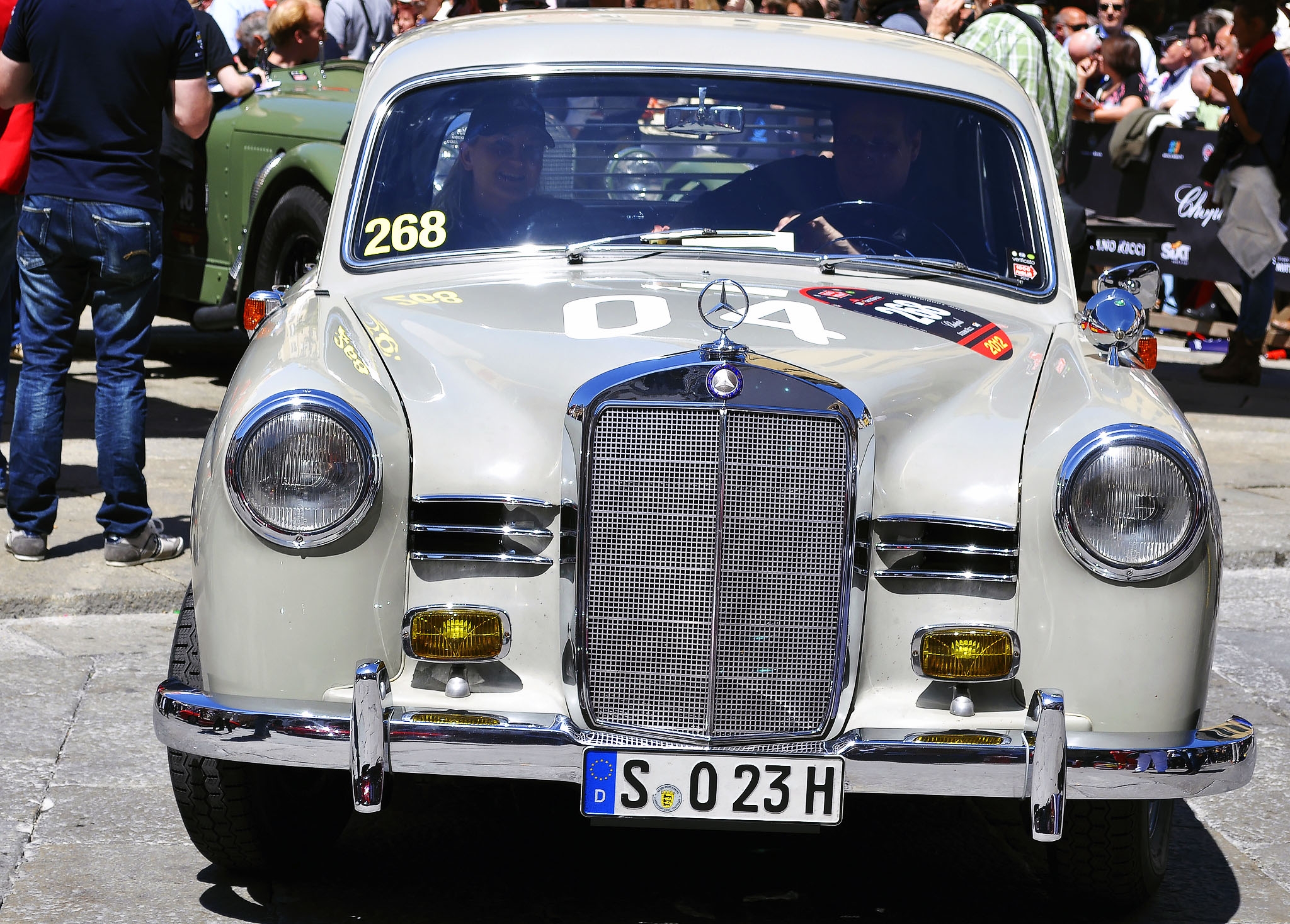 I have driven the winning car from the 1955 Mille Miglia. And as a Mercedes fan you will instandy picture one car, and one car only. It will be silver, it will be open-topped, and it will have the number 722 on its side. Nope, it was not that one. OK, if you are a bit of a Mille Miglia geek you will be thinking.  “OK, not 722… Then it must be that black Gullwing with 417 on the side, the one driven to class victory by John Fitch.” No, sadly not that one, either, although I nearly got to drive it once, and my well stocked fantasy garage Gullwing wears that very same livery. 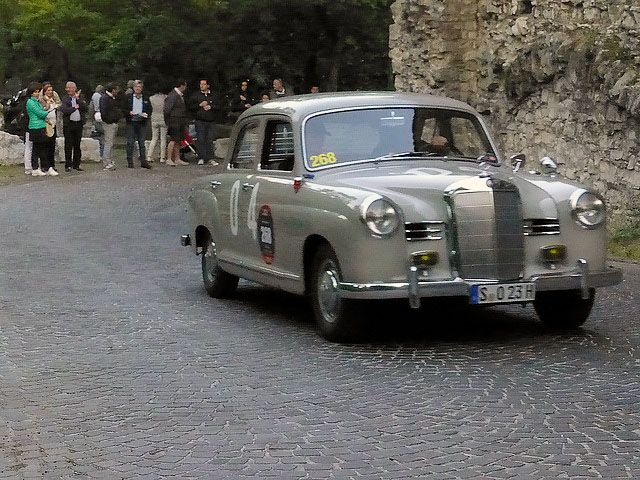 My Mille Miglia winner was somewhat less racy and glamorous than these two, but win it most certainly did, all the way back in the diesel category – a rather small group, containing just a couple of other Mercedes-Benz 180D Ponton W120. Mine was the winner, though, driven to class victory by  Helmut Retter with Wolfgang Larcher on the maps. And what a drive it must have been, their average speed over the 1,000 miles of the race a remarkable 59mph. OK, a little shy of Moss/Jenkinson’s incredible 98mph but, given that the 180D topped out at 68mph – 100mph or so shy of Moss’s 300SLR – and boasted just 39bhp, my guess is Retter just plonked a brick on the accelerator and left it at that. As an advert for Mercedes’ engineering integrity that is a pretty conclusive one, too. After all, how many cars do you know that could stand being driven at an average speed – average, that is – just 15 per cent short of their published maximum for nearly 16 hours without going bang? All three 180Ds that entered finished the race, too. 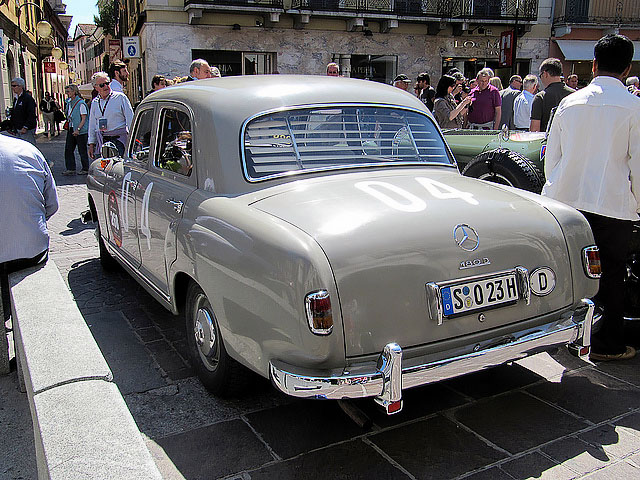 My drive in the Mille Miglia Ponton was along the twisting backroads of the Swabian countryside outside the Classic Center’s Fellbach base, and this car put a massive grin on my face.

Its originality was beguiling, from the faded paintwork to the worn but beautifully patinated interior – complete with the distinctive Venetian blind in the rear window. This time warp condition made the emotional link to that famous race even stronger, So it was not 722. But I didn’t care. Nor was I bothered that the flat, spring)’ seats, a big, spindly steering wheel and column-mounted gear shift did not really shout “rally car”. You see, this car was so charming to drive, no matter that changing gear did little but alter the pitch of the engine note. Or that reaching 60mph took the best part of 40 seconds. The Ponton is just about the slowest car I have ever driven, but it was also just about the most fun. 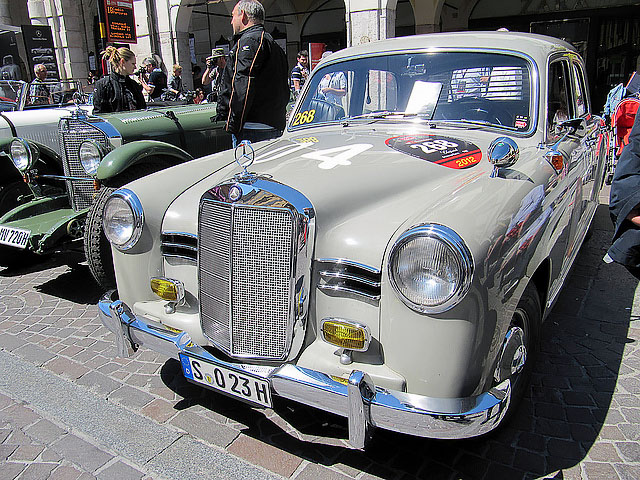 I recall meeting effervescent Mercedes PR man Geoff Day on the 50th anniversary Mille Miglia event in 2005. All the attention was on Moss, 722 and the squad of new SLRs driven to the event by fortunate journalists. But Geoff was happy just to be involved, and at the wheel of a true race winner. “It’s smiles per hour, Dan, not miles per hour,” he said as he drove off for the start. Some time later, at the wheel of the very same machine, I realised just how right he was.

The 180D’s interior, basic but functional, has a lovely six-decade old patina.

Only 39bhp and barely modified, but a class winner.

This car was so charming to drive, no matter that changing gear did little but alter the pitch of the engine note.

The Mille Miglia (Thousand Miles) was a road race with special stages run in Italy from 1927 until 1957, when after two fatal accidents it was banned. An emasculated version followed, but was discontinued after two years, the event revived in 1977 as effectively a parade for pre-1957 cars, run in May each year.

In 1955 the Ponton W120 was just two years into production, and a car Mercedes would have wanted to promote, hence the entry to the event. The race number 04 was allocated because the Retter/Larcher car left the start ramp at Brescia at four minutes past midnight – unlike in modem rallying where the fastest cars leave first, 60 years ago the slowest ones did in order to contain the event’s overall timescale. Their car, as with virtually of all Mercedes’ race and rally hardware since the dawn of motoring, has remained company property ever since. 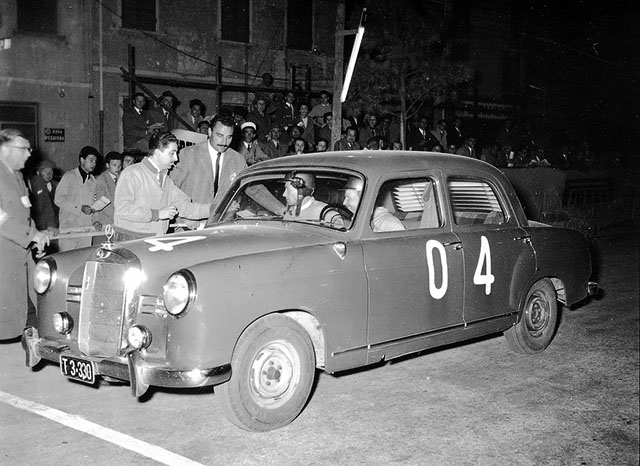 The same car on the 1955 Mille Miglia, ably crewed by Retter and Larcher.