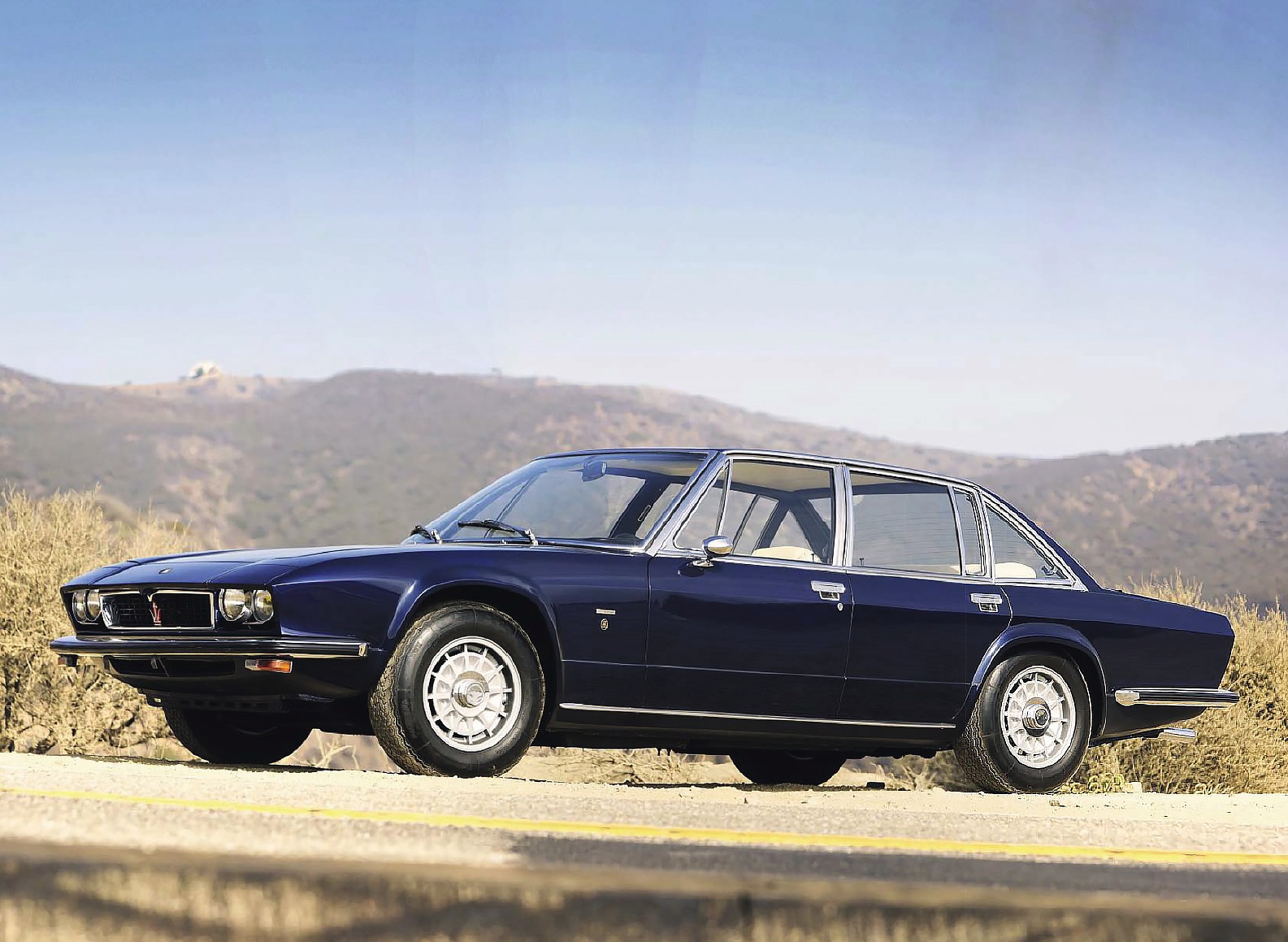 Frua’s family supercar. We sent Martin Buckley out to track down his favourite Maserati; no surprise that the king of barges came back with a super-rare saloon. Photography Pawel Litwinsky. By the early 1970s, the fashion among the very wealthy for having bespoke motor cars built to their own tastes and requirements had all but died out. The ‘reason was obvious: expensive series-produced luxury cars were becoming so uniformly excellent that having a ‘special’ laboriously hand-made by skilled artisans, whose labour no longer came cheaply, seemed a bit superfluous and indulgent.

Neither was it quite as socially acceptable to flaunt your wealth as it had been in the 1950s and ’60s, what with the rise of politically motivated terror groups across Europe. In this climate, standing out from the crowd had certain long-term health implications. Thus, if the international salons were still replete with one-off showstoppers and dream cars, few were being built to the instructions of individual private customers.

The Aga Khan IV earthly incarnation of the Divine among his 15 million followers around the world, was one of a select few who still either felt himself immune to these developments, or simply didn’t care. Despite his prince-without- a-realm status, the 49th Nizari Ismaili Imam was – and still is – one of the world’s richest royals, famed for his yachts, his stud-farms and (inevitably) his private island. His playboy credentials had perhaps not reached the extremes of his late father Aly Khan (who crashed his Lancia Flaminia GT into a Simca in 1960), but he was certainly having a good crack at it. And, like any worthwhile international rich-kid, he already had a colourful track record of commissions for opulent special-bodied cars, including a Maserati 5000GT designed by his friend Pietro Frua. 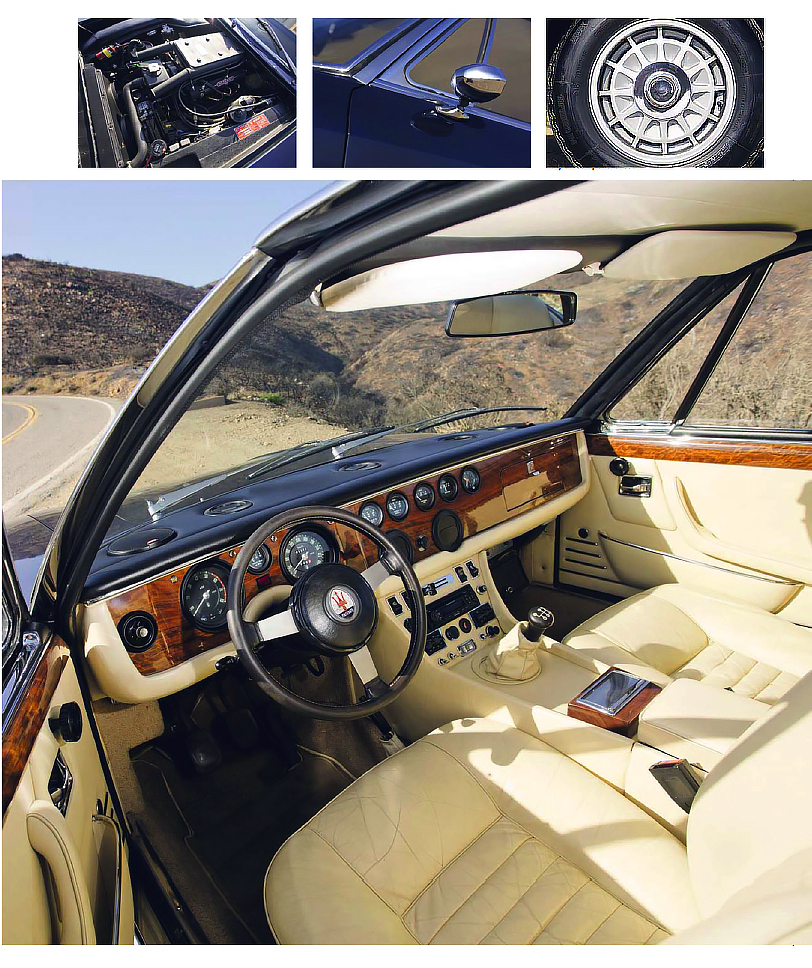 So the Frua-bodied Maserati saloon you see here fitted the bill perfectly. It was clean and modern-looking, yet somehow regal at the same time, and perhaps seemed appropriate personal transport for a man who was approaching 40 years old and still on wife number one.

Frua had, of course, styled the first 1963-1970 Quattroporte and was one of the most favoured of all the couturiers working on the classic Maserati chassis, with a CV that included the Mistral, three 3500GT show cars, two 5000GTs and a prolific 27 bodies on the 2-litre cars of the ’50s. He sketched the proposal for this second-generation four-door Maserati in 1970.

In fact, it was the sister Quattroporte to this car, AM121 002, that the Aga Khan saw at the Geneva Salon in 1972, although it had made its debut in Paris a year earlier. Signor Frua, who told him that it was built from second-hand parts, dissuaded him from buying it. So the prince commissioned another, chassis AM121 004, the featured car, which has been part of Bruce Milner’s Los Angeles collection for nine years. For a while, Milner owned both FruaQuattroportes: the Indy-style wheels give away the earlier car, while 004 has Ghibli-style alloys.

From far left: badges betray the hand of Frua; clean lines cleverly hide the Quattroporte’s bulk; headlights are hooded by the bonnet overhang.

The Aga Khan’s brief to Maserati was that his new car had to be good for more than 250kph (156mph) and 0-60mph in less than 7 secs, yet also have more room inside than the standard factory Quattroporte that had just gone out of production. For this project, Maserati supplied a special extended version of the Indy chassis coded AM121, a construction of tubular steel and monocoque box-sections not unlike the old Quattroporte’s underpinnings but with Citroen high-pressure hydraulics for the brakes. The French company had bought Maserati in 1967, and was beginning to exert some influence over the cars’ engineering. Frua’s proposal for a new Quattroporte was almost certainly a victim of this policy of ‘Citroenisation’ at Maserati: his design was usurped by a much less attractive, Bertone-styled Quattroporte II ‘production’ model (if you can call 14 cars a production run) based on the front-drive, V6-engined SM.

The Aga Khan had a long wait for his new machine. Maserati didn’t supply the chassis to Frua until November 1973 and the finished car, panelled in aluminium, was not delivered until September 1974, at a total cost of Lirel8m. The project generated quite a lot of exasperated correspondence from the Aga Khan’s office in Paris, but presumably he was pleased with the result, which featured the latest 4.9-litre, 330bhp Bora-type four-camshaft V8 rather than the 4.7-litre unit used in the original Paris/Geneva car. That earlier example, chassis 002, was displayed at the Barcelona show in 1973 and has subsequently been attributed to Juan Carlos, the King of Spain, although officially it appears to have been a Spanish government car.

At some point during the 1970s, the Aga Khan gifted the dark blue 4.9-litre Quattroporte to his favourite jockey, Yves Saint-Martin. Via a third owner, it ended up at an auction in Paris in 1989 and then spent 10 years in the Geneva International Automobile Museum before finding its way to Alfred Brener’s collection in Texas, USA. Brener bought chassis 002 to keep it company in 2000, but by 2005 Californian collector Milner, quietly assembling perhaps the world’s finest collection of rare four-door exotics, had acquired both of the Frua Quattroportes, although they were billeted together only fleetingly in his fortress-like LA warehouse.

Angular but beautifully proportioned, the Frua shape has a deep, six-light glasshouse and a slim body with pronounced wheel arch flares. The hooded quad lights give the car a powerful, brooding assertiveness. It is hard to think of another saloon with such muscular dignity as this. Only the chopped tail seems to link this mature shape with Frua’s first Quattroporte, and the roof is just a sliver of aluminium that allows

‘Sunburst’ alloy wheels are shared with the Ghibli and later Mistrals. Below: once you get used to those sensitive brakes, the Frua QP isajoyto hustle along.

all of that glass to appear to hover above the body. Naturally there are some familiar details, such as the Alfa 2000 Berlina rear lights and the doorhandles that look as if they are from a Fiat (but probably aren’t), yet somehow none of this jars the aura of jewel-like sophistication.

Each of the fuel tanks has its own filler in either rear wing, with a switchover button on the dashboard. Pop the bonnet catch andyou can see that the V8 sits well back, its huge radiator cooled by dual electric fans with the air-conditioning pump hanging off the front of the block on a meaty bracket. The power-assisted ZF steering box is mounted high on the bulkhead and there’s a Citroen LHM reservoir for the power brakes. Like a few late Indys, this car needs no fewer than three different fluids for brakes, clutch and steering.

Flooded with light from that huge glass area, the cabin has an atmosphere of richness. There are eight instruments set into the deep Rosewood dash: the rev counter is redlined at 5000rpm; the speedometer runs to 300kph; and there are minor gauges for oil pressure and temperature, charging and benzina. The seats, with their built-in headrests, appear to be unique to the car but the smallish steering wheel is shared with the Khamsin and the Bora. The huge brake and clutch pedals are well spaced in the deep footwells and there is nothing excessively Italianate about their relationship with the position of the steering wheel. There’s a cubby box between the front seats and, if the glovebox is tiny, then it is at least augmented by a separately hinged door near the passenger’s shins through which the fuses can be inspected.

Out on the Pacific Coast Highway, the Maserati feels strong and authoritative, punching cleanly to 5000rpm in its first three gears with some whine from the cogs and a metallic tang of aggression that is unmistakably V8 yet on the other hand decidedly un-American. It’s some-thing to do not only with the Latin cliche of thrashing cam chains working on four camshafts, but also a factor more elemental and basic, such as the firing order. The exhaust note suggests refinement and power in equal measure.

The engine is elastic and smooth, with a notably pleasing feel to the long-travel throttle as the revs leap and shut down in exactly metered degrees. AM121 004 is well sealed against wind and road agitation but never silent. It is no limousine, but there’s lots of head- and legroom in the back and the rear seat is as cossetting and deeply bolstered as the fronts. Had the Aga Khan paid someone else to drive, there would have been no excuse for anything other than serene progress once the driver got used to the suddenness of the Citroen brakes, which need to be caressed rather than jabbed at. That level of control is slightly at odds with the heft required to move the ZF gearlever through its five slots. The difference in effort can make driving the car quickly and smoothly on the smaller, twistier canyon roads slightly uncertain at first. The smooth, positive feel of the power steering as it plots a quite decent lock is certainly an asset, but if you were being ultra-critical you might comment that the front feels under-damped. On the other hand, body roll is well enough checked and you can push through the safety valve of understeer to make the rear tidily break away.

Not that such aggressive treatment is really the point of this magnificent car. It was designed to be driven fast and well on good-quality roads that show its relatively crude cart-sprung live rear axle in the best-possible light. Undoubtedly a less compromised solution would have been essential had Maserati elected to adopt Frua’s styling proposal, yet it copes surprisingly well with a wide range of surfaces and scenarios because it is properly located and the car rides more comfortably and predictably than it has any right to, perhaps by dint of its sheer heft.

That this beautiful Maserati, with its long, deep boot and effective air-conditioning, was a practical vehicle in its prime is evidenced by the fact that it has covered more than 80,000km. It has an air of discreet elegance that would not have attracted undue attention, only slightly puzzled looks from other drivers and pedestrians as it slipped through traffic in Paris or Geneva. In the rarefied world of four-door exotica it must rate as one of the ultimate prizes and is certainly, for me, the best-looking Quattroporte.