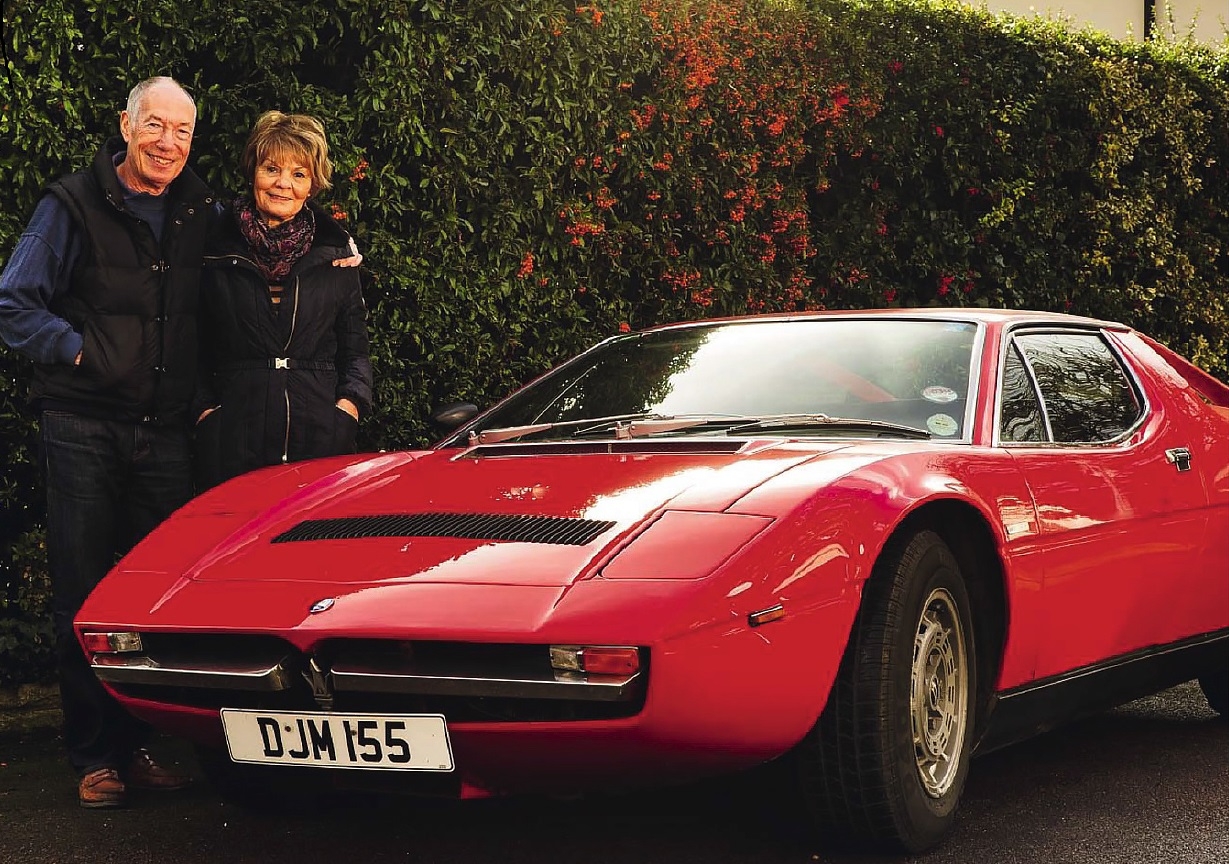 Magic Merak. Derek Mills admits to having had “something of a midlife crisis” when he bought his Maserati. He’s still enjoying the car 35 years later, as David Evans discovers. Photography Tony Baker/Geoff Lancaster. Some people are fickle with their classics, while others stick with them. Derek Mills is definitely one of the latter. The retired engineering agency boss bought his beautiful 1977 Maserati MerakSS when it was barely a year old.

“I was in my mid-to-late 30s and wanted to buckthe system with my new car,” he explains. “I thought I’d like a Ferrari, so I drove a 308GTB and a GT4 but didn’t get on with them. Then I tested a Porsche 911. The salesman told me to floor the throttle in first and it scared the living daylights out of me. Bell & Colvill was the local Maserati dealer at the time and I’d seen a 250F in the showroom because Bobby Bell raced one. What I noticed immediately about the Merak was the build quality, with a solid feel to it, so I traded in my Silver Shadow for the Maserati.” The Merak proved to be eminently practical: “It was my only car and I never had any trouble with it. We had three young children and could get them in the back easily; it’s a serious 2+2 – and economical. If it’s running right, it’s quite possible to return 25mpg. I even gave the mayor a ride to the town hall once as a birthday treat.” A couple of years later, the family needed a bigger car so Mills bought a Jaguar XJ6 but kept the Merak “as a toy” and maintains that it’s more comfortable: “Even after five hours, neither my wife Christine nor I have ever complained.”

It isn’t quite perfect, though: “The handbrake is rubbish. If you leave it on a slight incline and don’t realise, you may not find it where you parked it!” So he always carries a small chock.

There has been “a dark side” to running the car, but mostly on one trip in 2005. They were en route to the South of France when smoke started billowing from the back: “One of the LHM hoses had fractured so I was stuffed. While I was talking to the recovery firm, a gendarme pulled over to tell me that I had to move the car – so I handed him the phone and they explained that I’d broken down. After that, a woman stopped and asked if her son could be photographed with the car. I had to just smile and say: ‘Of course.’

“We were taken to a nearby yard that I didn’t like the look of but I attempted a French accent for the farmer and said something like:1 Citroen hydraulique-kaput!’ So he replied: ‘It’s 2pm, why don’t you go for lunch and the car will be ready at five?’ I thought that was optimistic, but it was all done when we came back. As I walked into his office, I saw lots of photos of Lancias because he used to service the rally cars. Then I asked about the pipe: ‘Ah,’ he said, ‘my friend down the road, he had one. ’And it’s been on there ever since!” That wasn’t the end of the day’s traumas: “The charging light kept coming on and I wondered if some LHM had gone into the alternator. We were taken to a Bosch specialist that replaced it but the same thing happened the next morning. It transpired that the air-conditioning thermostat wasn’t closing so it was working at full and had burnt out the controller. I took out the fuse for the air-con and it ran fine all the way home.” “That said,” he adds, “neither of those problems was any worse than if I’d had a Ford.”

Mills swears by regular maintenance. “You can learn so much about the Merak,” he says, “because it’s so easy to take apart, such as removing the door trim to inspect for rust. Likewise, you need to check in the back because water can get in around the rear screen. The bodywork is the most important to keep on top of. I wouldn’t touch the triple Weber carbs, but I do the routine jobs. And I try to use the car at least once a week.” The only major repair in 62,000 miles came about last year, for which Mills blames himself. “The hydraulic warning light came on,” he recalls, ruefully, “but I didn’t want to stop on the motorway and carried on after the car had told me not to. I had no clutch, so by the time we spotted an exit I’d wrecked the gearbox and chipped a few teeth from the flywheel. The garage had to dismantle most of the back and I ended up with a big bill, but that was hardly the car’s fault.”

The couple only really got involved with the Maserati Club after they’d owned the SS for 10 years: “I was reading an article in the magazine about lots of members not going to meetings and I said to Chris ‘they’re talking about us here’. So we arranged to go on the Spring Rally.” And, as Christine points out: “We haven’t missed one since. We’ve been to so many interesting places-East Germany as was, Sweden and France.”

“One of the best events,” says Derek, “was the Cameron Millar Rally, based in Wexford two years ago. We went on the Mondello Park track as part of the tour. The Merak isn’t quick off the mark, but it feels really stable on a circuit.”

Its backseats still come in handy, too. “We’re notorious in the club for the amount of stuff that we cram into a small car,” says Derek, who has been an events co-ordinator since 2008.

As for Maserati ownership, a friend – and fellow sufferer – likens it to a sickness for which there’s no cure. “In most cases,” Mills jokes, “it just gets worse. We now have an Indy as well and a Quattroporte V that I bought seven years ago.” So what would his advice be for anyone thinking about buying a Merak? “Make sure that it has a full service history, from a specialist such as McGrath’s. If you know the vendor – via the club-even better. That way you should end up with a car that hasn’t been messed-about with.”

But would he ever swap it for something else? “Never: if we did, it would have to be another Maserati because we’ve met so many wonderful people through the club. We never thought this whole new social life would open up to us.” And, as Christine says: “We’ve never looked back!”