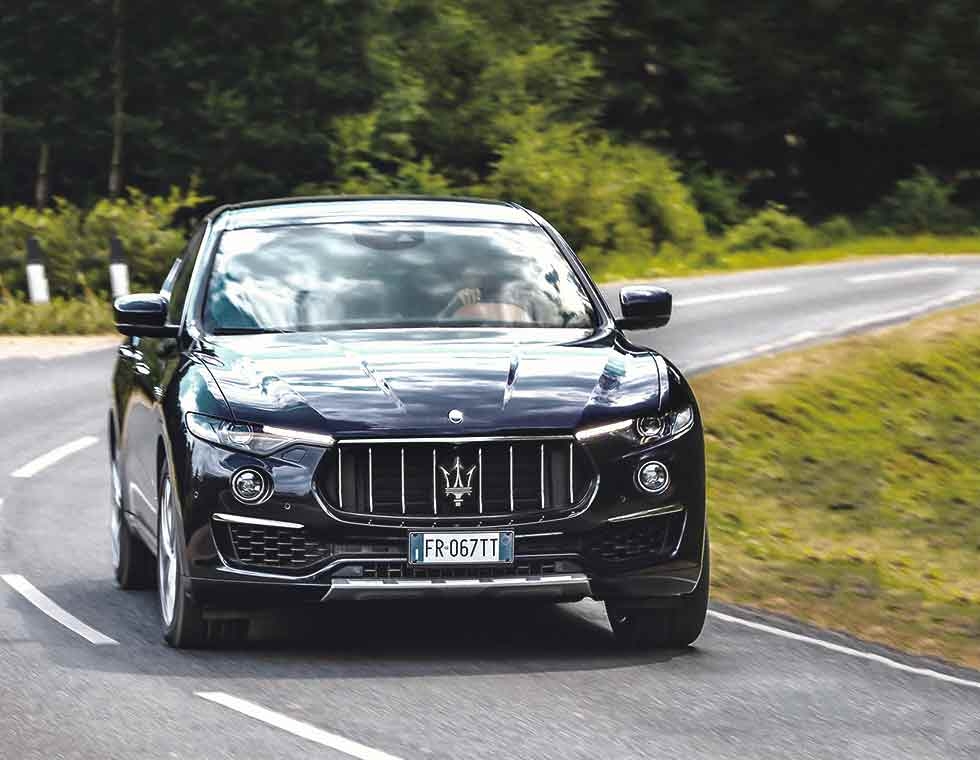 While not a lot has changed on the updated 2019 version of Maserati’s big SUV, there’s considerable excitement waiting in the wings, as we report. Story by Chris Rees. Images by Maserati.

As model year refreshes go, the MY2019 Maserati Levante’s is slight indeed. Perhaps that’s why I find myself with my nose in jars of juniper berries, cassia bark and angelica root in a gin distillery – today’s press junket is more about ‘lifestyle’ than a serious journalist like me can normally deal with. But I’m doing my best.

At least there are engineers and designers I can talk to. The designer takes me through the exacting process of creating a new gearknob, which is genuinely the most important upgrade to report on for the 2019 Levante. Except it isn’t entirely new – it’s already been seen in the Levante Trofeo.

The gear lever has been redesigned following customer feedback. No longer for Maserati that old-school physical shift gate: it’s now got the more modern and intuitive method of a ‘P’ park position button at the top of the lever, which is now much nicer to grip. The travel through each gear position is swifter and you now have using automatic or manual modes by moving the lever from right to left.

There are some subtle upgrades inside (which also apply to the Ghibli and Quattroporte, incidentally). For the first time, full-grain ‘Pieno Fiore’ leather becomes an option, with a natural, soft feel. As it ages over the years, it’s also said to acquire a “unique character”. You can choose from three colours – black, red and tan – with specific stitching on the seats and double stitching on the door panels. Maserati also offers three new high-gloss interior veneers for the Levante. The MTC+ infotainment system has also been tweaked with updated display graphics and climate control system.

On the outside, the colours have been updated for MY19, with 11 to choose from, including two new ones: Rosso Potente and a deep, dark blue called Blu Nobile (the latter being the colour of our test car). There are also two new alloy wheel designs, in 20 and 21-inch sizes.

As for the recently introduced Nerissimo package, this has been updated for MY19 across a wider range of colours, combining black elements with dark LED headlights, tail lights and exhaust tips, black chrome details and dark-finished wheels.

There are also new headlamps. Oh wait, no, they’re only an option. Adaptive full LED matrix units, that is. They’re very bright, I can tell you. Or I would be able to, had I seen them in the dark, which I didn’t, because this was the longest, sunniest summer anyone can remember having in Britain. Let’s say the LED headlights are like the summer of 2018, then.

Perhaps the biggest news is that Integrated Vehicle Control (IVC) is now standard. Well perhaps no so much news as Johnny-come-lately: IVC has already been launched on the Ghibli and Quattroporte sedans. This goes one step beyond simply correcting vehicle instability, helping to prevent it. That makes it safer, I grant, but I didn’t appreciate how it gives “even more exciting performance” as Maserati claims.

One other very significant addition for MY2019 is a new entry-level petrol engine in the form of a 350hp V6 (as seen in the Ghibli and now also in the Quattroporte). It’s claimed to offer “Maserati’s signature sound” and it’s very nearly as fast as the ‘S’ – reaching 62mph from rest in 6.0 seconds and topping out at 156mph. CO2 emissions 268g/km and fuel consumption of 24.4mpg are claimed.

Unfortunately I can’t tell you how the new 350hp V6 drives, since it wasn’t there at the launch. Instead I got to reacquaint myself with the rather fabulous 430hp ‘S’ – an engine which wasn’t initially due to come to the UK, but there’s been a volte-face and diesel is on its way out, and petrol is definitely in.

The Ferrari-built V6 twin-turbo engine sounds fantastic, especially when you press the ‘Sport’ button: a deep rumble and a searing exhaust note and punctuated by delicious pops when you take your foot off the throttle. You don’t need to rev it hard, so much torque is there at low revs. Gentle dabs of the throttle sees the car leap forwards and the 0-62mph time is a sports car-like 5.2 seconds.

The car’s strong rear-wheel drive bias and limited-slip diff means it can really be hustled through corners, defying your expectations of roly-poly SUVs. And the electric power steering is far more feel some than most.

V8-POWERED GTS AND TROFEO MUSCLE IN

An all-new V8-powered Levante called the GTS got its world premiere at the 2018 Goodwood Festival of Speed, where the Levante Trofeo also made its European debut (having appeared in the US previously).

The Levante GTS uses the 3.8-litre V8 twin turbo unit from the Quattroporte GTS, albeit re-engineered to work with the Q4 all-wheel drive System and retuned to deliver 550hp at 6250rpm and 730Nm of torque between 2500rpm and 5000rpm. Like all Maserati petrol engines, the V8 is assembled by Ferrari in Maranello.

The GTS takes 4.2 seconds to reach 62mph, while its top speed is 181mph; the chassis has been tuned to handle the extra power. The GTS has a lower, sportier front spoiler and different rear bumper. Inside is full premium leather or optional ‘Pieno Fiore’ natural leather, plus sport pedals and a Harman Kardon audio system.

As for the Trofeo (on the left in the pic above), this has an even more powerful 590hp V8 engine, slotting in at the top of the Levante range as one of the quickest SUVs of all – and one of the most potent Maseratis ever. The twin-turbo V8 delivers 590hp at 6250rpm, with the same 730Nm torque figure as the GTS. Claimed performance figures are 0-62mph in 3.9 seconds and a top speed of 187mph. A new ‘Corsa’ driving mode includes launch control, as well as opening the exhaust valves, providing faster gearshifts, lowering the air suspension and sharpening the damping.

The Trofeo is distinguished by carbonfibre details, bonnet vents and a V8 engine cover in high-gloss carbonfibre. Full Matrix LED headlights and ‘Trofeo’ logos on the C-pillars are other distinguishing features, while 22- inch ‘Orione’ wheels are the largest ever fitted to a Maserati.

Production of the Trofeo and GTS are initially for North America, but Maserati hasn’t ruled out a European and UK launch.