The E30 will never go out of style, it’s a simple fact. It’s now 2019, a brand new year, and here we are writing about a car that came out 30 years ago. That’s kind of incredible but tells you all you need to know about the amazing staying power and limitless appeal of the E30. When it was launched it set the bar so high for the mid-size exec sector that rivals have been playing catch-up ever since and it became arguably the symbol for success in the ’80s. Best of all, now it’s arguably a car that appeals to everyone on the scene – the older generation of modders love it because it reminds them of when they were younger and just getting into cars, and the younger generation loves it because it’s just so cool and there’s almost no limit to what can be done with it. And, for those on a little bit of a budget, BM’s older offerings are so good-looking that you need very few mods to just enhance them by the perfect amount and to make them instantly individual and yours. 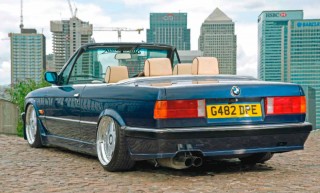 It is therefore very easy to understand why Vas Ahmed was drawn to his E30, but this is a build that has a lot more going for it than mere good looks and there is in fact a lot more to this car than initially meets the eye. “I’ve always been into cars,” he tells us as we start to chat. “Since I was 11 or 12 my dad used to buy salvage cars and fix them up and my family has always been a BMW one,” and growing up around cars clearly rubbed off on him in very much the right way as evidenced by the machines he’s owned over the years.

“My first car was an Escort and as far as BMs go I’ve owned an E36 M3 Evo Cab, an E46 M3 Cab and six E30 Cabs, the first of which was a Zender-kitted Birds car…” so it’s fair to say that Vas is a bit of an E30 addict and knowing that it’s not all too surprising that he’s ended up with another one. “I bought my first E30 when I first bought my garage – my brother-in-law had E30s, I saw them, liked them and wanted one for myself,” he says and while that was some time ago now, Vas’ passion for E30s has not waned one bit over the years and, if anything, getting involved in the scene with this project may have ramped it up even further. 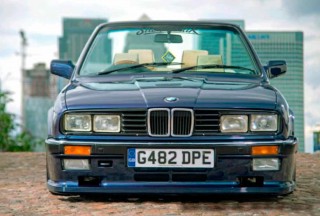 “I bought this one in August 2016,” explains Vas; “I fancied one at the time and spent a long time looking for the right one,” and his efforts paid off when he picked up this tidy 320i. “I spent about six months looking for the right car before I came across this one. It was about 90% rust-free and I wasn’t interested in a facelift, it was all about the chromies for me,” he grins. Initially he had pretty much no plans for it, adding an M Tech 2 kit and a set of BBS reps but then he discovered the show scene and things quickly spiralled out of control. “I saw Faz’s Calypso E30 Cab and I loved it, it was one of the main inspirations for my whole build”, smiles Vas, “but I didn’t know what air-ride was, I was a real show scene virgin.” You’d never know that based on what he’s built, though, and rather than just running in head first, he took his time to do his research and build his perfect E30. “The first thing I did was re-fitted the Tech 1 kit – I couldn’t get rid of the chrome, there are not many chromies out there so I had to preserve it,” he smiles. “The next step was to strip the car back to almost bare metal and give it a respray in its original colour, Royal blue,” and with the car looking perfect he could now crack on with the rest of the mods.

The next step for Vas was wheels, so he ditched the BBS reps and started hunting for something more becoming, but sticking to the stock four-stud configuration would have seriously limited his potential wheel selection. He therefore carried out a five-stud conversion, with E36 M3 Evo components up front and an E36 318ti setup at the rear, and then he could start shopping for his perfect wheels. “I added a set of refurbed BBS RCs [aka Style 5s] and then got the 17” OZ Futuras I’m running now. I saw them on @friedporkchopE30’s car and really liked them so I got my hands on a set; I built them up myself, painted the centres, polished the lips and then sealed them,” and the Futuras are a great choice of wheel for the E30. It’s a car that can pull off just about any style of wheels and while the default choice for most people is a classic cross-spoke, bucking that trend with a simple five-spoke design is good to see. We love the soft contours of the spokes on the Futuras, the subtle flaring at the end of each one, those classic centre caps and, as 17s – quite possibly the perfect size choice for the E30 – with those elegant silver centres and deep polished lips, they just look awesome, especially when combined with the air-ride. 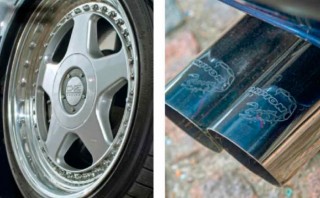 Having taken inspiration from Faz’s car and keen to embrace the scene, air was always going to be on Vas’ shopping list and he has no regrets. “I went for an Air Lift Performance 3H setup with a single tank and single Viair compressor and I am 100% happy with air. It drove really badly before when I just had it on springs but it feels so much better now, plus I can go anywhere without having to worry about speed humps or anything like that,” he says. In addition to that Vas has also had his suspension fully poly bushed in order to get the chassis feeling nice and tight. He’s also taken full advantage of the five-stud setup his E30 is now running and has fitted a set of E36 M3 Evo brakes up front for a significant increase in stopping power, and he needs it as this E30 isn’t just about aesthetics, there’s something tasty tucked beneath that bonnet too.

While the 320i is absolutely fine, powered as it is by one of BM’s characterful M20 straight-sixes, Vas found it lacking in shove so something had to be done and that something was an engine swap. “I tried to get hold of an S50 first but they are hard to come by, and then I saw other people running the M52B28 swap – it looked clean and I liked the idea of this swap so I went for it. The engine was cheap but all the other parts were expensive,” winces Vas, but no pain, no gain and while his wallet may have taken a little bit of a bashing, the end result was well worth it. The M52 has been equipped with a custom loom and exhaust manifolds from Dan at BM Conversions UK (DanThe on the E30 Zone forum), along with a full E30 M3 Scorpion exhaust, an M42 gearbox running a Z4 2.5 short-shift and, at the back, a 3.91 LSD. It’s a mighty fine combination of engine and accompanying mods and, most impressive of all, is the fact that Vas fitted the engine, gearbox and everything himself – in fact he’s done every single mod you can see on the car, so this is most definitely one project that has been built, not bought. 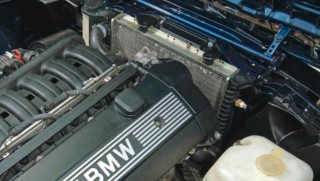 All this adds up to a comprehensive build but there’s plenty more to enjoy here. One of the most controversial aspects of the car is without doubt the square headlight setup, as the original round headlights have such universal appeal, but we have to say that we admire Vas’ willingness to walk his own path with this build. “I saw these for sale on eBay and I wanted to be different so I bought them,” he says and we’re glad he did as they give this E30 a different look that makes it stand out even more. What makes this car really stand out, though, is that stunning interior and it’s actually the reason why Vas bought this particular car, as it had just been done and it looks fantastic. You’ve got acres of cream leather with gorgeous dark blue piping and it is the perfect colour combo to go with the rich, deep, dark blue bodywork, and then there are additional touches like the cream gear gaiter and the entire dash has also been covered in leather, making this interior particularly lush. Vas has added a custom wood-rimmed Nardi steering wheel complete with Alcantara centre section along with some audio upgrades, with Pioneer components and head unit, a Phoenix Gold amp and a Rockford Fosgate sub, all housed in a tidy boot build.

For a first show build, this is an exceptional E30 that has been enhanced with a particularly fine selection of mods across the board. Vas has put in a lot of effort and approached everything with a keen eye for attention to detail in his quest to build his perfect E30, and the results speak for themselves. But Vas isn’t done with it just yet… “I have lots of plans for it,” he says with a grin. “I’ve changed to a set of Schnitzer wheels since the shoot and have redone the boot build with twin 12” subs, and I’m thinking of maybe fitting a different engine. I’ve started working on it for this season” he says so we’re going to have to wait and see where Vas takes his E30 next but one thing is for sure, it’s never going to be for sale. “I built this for my son,” he smiles, “he loves it and he will get it after me so it’s going to stay in the family,” and so another BMW family is created, with this lovely E30 at its centre.

THANKS My brother Naeem, my friends Reggie, Kawsa and Jay, all these people helped with the build along with many others 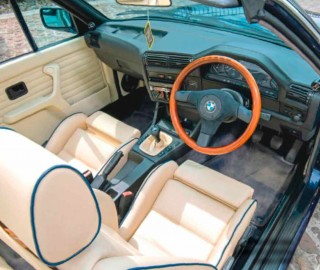 Interior has been treated to a stunning custom retrim. Carbon intake and M50 manifold.

Tidy boot install for the air and audio components.