You know what’s cool? Tourings are cool and modified Tourings are even cooler than that. Why? Who knows, it’s just a universally accepted fact. For starters, Tourings look great – the proportions are spot-on, they’ve got a good shape, and they’re practical – which is a handy bonus if you need a sensible base for your project car. It’s also this sensible, practical aspect of their character that makes modified ones so exceptionally cool, because it goes against their very nature. Taking a family of five for a trip to the coast, loaded with luggage and dog? Yes. Aired-out at a show on massive splits, or hammering around a track? Well that’s just crazy and wrong, and we love it.

Ian Hodge most definitely loves it because that’s exactly what he’s built, a wild, hardcore Touring for the the track and it kicks all the ass. Ian has always been into cars, he tells us, but more than that he’s also been involved in motorsport for many years, competing in oval events since the age of 12, racing Minis, 205s and the like at Arena Essex. He’s clearly a man with petrol in his veins. Don’t worry, he didn’t take the E30 oval racing, but it does tie in to the direction in which he’s taken his Touring. “I came across this E30 325i nine years ago, through a friend of a friend, when it was up for sale for £200,” he explains. “It had been on his drive for five years; I’d always wanted an E30 but never thought I’d be able to afford one so I snapped it up and put on some BK reps and eBay springs.” That’s where the story could have ended, or perhaps headed off in a different direction, were it not for one key decision. “I took the Touring to the ’Ring,” smiles Ian, “and suddenly wondered what I’d been doing driving around an oval for all those years. I was addicted after three laps and got the bug in a big way; when I got home I sold all my oval stuff and used the money to buy coilovers and brakes and then I stripped the interior…” and so it began. 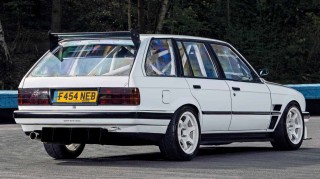 What you see before you is the result of nine years of work and it shows, as the end result is awesome and Ian has left no stone unturned, no component unmodded on his quest to create the ultimate ’Ring wagon, and part of that plan was the engine swap. “I had wanted an S50 originally,” he says, “but I changed my mind and decided to go for the M52B28 instead. It was cheaper to buy, it’s cheaper to fi x if it goes wrong and everyone runs M3 power so I didn’t want to.” And why not? It’s nice to be the person that does things differently but still gets impressive results and Ian and his Touring do just that. This M52 has received some fettling to help massage its power output and has been equipped with an M50 intake manifold, a custom air filter relocation setup that mounts it in the inner arch, and a set of custom exhaust manifolds, which Ian says results in a total of 209hp. The engine mods are accompanied by a selection of transmission upgrades, with an E36 five-speed gearbox hooked up to an IRP short-shift kit, while at the rear there’s a rebuilt LSD with an altered ramp angle for a 40% lock-up. It’s a strong combo that has endowed this lightweight touring with some serious pace on track. “My best time at the moment is 8:19, and that’s with a passenger,” says Ian, impressive stuff. “I’d love to go sub-eight minutes but without resorting to an M3 swap; I’m looking at a set of cams and then, with just me in the car, I reckon I could do it,” he adds, and so do we.

Of course, the uprated engine and transmission certainly play their part but there’s a lot more to this car that helps it perform so well. The chassis, for example, has been sharpened up with a set of Gaz Gold coilovers, which offer combined bump and rebound, as well as ride height, adjustment for the perfect setup. Ian has added poly bushes throughout and, to ensure he never runs out of brakes while hammering around the ’Ring, a set of four-pot Wilwood calipers with 310mm discs have also been fitted up front. For the wheels, he opted for a set of 16” Rota Grid Drifts in white, naturally, wrapped in super-sticky Toyo R888R rubber, perfect for maximum grip and traction. 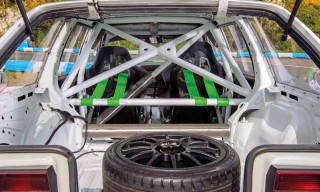 What’s really impressive about this build, though, is the amount of weight reduction that’s gone on here and Ian has stripped just about everything possible from his E30, resulting a a seriously lightweight machine that is able to take full advantage of its chassis and performance mods. The interior has been fully strippedout: gone are the carpets, rear seats, the spare wheel tub has been removed, the doors have been skinned, the regulators have been removed, the sunroof has been replaced by a carbon panel, all the extra, unnecessary wiring has been trimmed away. It’s completely bereft of anything that isn’t there to enable Ian to either drive the car or keep the weather out and the weight saving has been dramatic, with the Touring now tipping the scales at a scant 1070kg. That’s seriously impressive and outrageously light, so it’s no wonder it’s so rapid around the ’Ring. The full roll-cage is completely custom; the front section is actually for an E30 Coupé but Ian made it fit, while the rest is fabricated from T45 cage tubing he acquired from a friend, and it’s FIA-approved. Up front you’ll find a pair of Cobra Monaco single-piece bucket seats with four-point STR harnesses while a deep-dish, suede-trimmed Kode steering wheel is the perfect thing to hang onto while at maximum attack on track.

Of course, what is most striking about this particular E30 is the exterior, because it lets you know in no uncertain terms that this Touring means business and, while it might be a bit much on a lesser build, on a car like this it’s totally appropriate. With the exterior work it was all about once again saving weight but also increasing the cars stability at speed, which there is plenty of at the ’Ring. The bonnet is made from fibreglass, with AeroCatches fitted up front, and raised at the rear to aid cooling; the windows are polycarbonate items from CWS Plastics all-round, with the rear side windows made especially for the car using a wooden template based on the original glass items. The front lower valance is a custom item designed in the style of the Alpina E30 item and affixed to that is a custom front splitter, which is held up by legs hidden behind the front bumper. The front wings? They’re custom too, built using pizza boxes(!) as templates, with vents in their trailing edges, and they look awesome. Tiny carbon race mirrors look equally good on the hardcore Touring and at the back you’ll find a custom roof spoiler, while removing the spare wheel tub has enabled Ian to fit a ferociouslooking rear diffuser. Not only do all the aero components look spectacular, Ian says that have made a noticeable improvement to how the car feels on track; “It definitely feels a lot more stable now,” he says, and they’ve made for an even more impressive machine with which to attack the ’Ring. 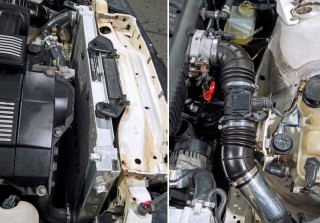 Ian’s E30 is an absolutely spectacular build. It’s visually stunning and none of the wild exterior additions are for show, it’s all about improving the Touring’s on-track performance, and the same goes for all the mods that have been carried out here. The fact that everything he’s added also happens to make it look so utterly bad ass is a welcome bonus. We love the fact that this whole build came about from one visit to the ’Ring and it has led to the creation of such a focussed machine; that’s our sort of level of dedication. It comes as no surprise when Ian tells us that this car is a keeper; “I’d only sell it if I physically couldn’t get into it any more, but otherwise I plan on keeping it forever. I might change some bits,” he adds, “but we’ll see.” Cams are coming, that much we’re certain of, and will bring him ever-nearer that magical eight-minute mark, especially with a clear track and no passenger, and all without M power. Any further revisions are being kept close to Ian’s chest though once you’ve built a car like this, wholly uncompromised and absolutely focussed, there’s really not much left to do and that’s really rather impressive. 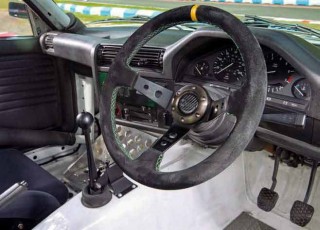 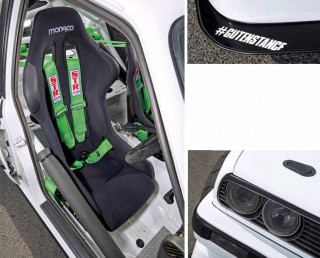 THANKS Steve Bull for his fabri-cobbling skills, without him it would not have been possible, and the family for tolerating me spending so much time working on Nancy

Not just fast but practical too! 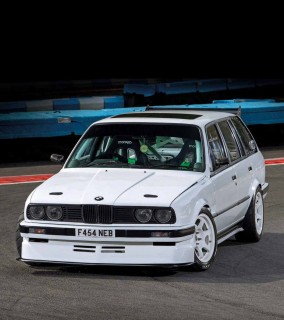