If you’re in the market for a historied high-end sports car, from the 1980s or 1990s, a few options will no doubt immediately spring to mind. You could go for a Ferrari 348 or 355, for example, or opt for a 993-generation Porsche 911. However, even if you pick a less obvious yet similarly capable car – such as a Honda NSX – you’ll encounter one common trend: they all cost a small fortune these days. The 348 was never as well regarded as the 355 but, even so, a good one will cost more than £40,000. It’s a similar story with the 993 and NSX, unless you delve into the world of automatics or high-mileage examples.

‘IT’S A MUCH BETTER CAR AND MORE USER-FRIENDLY’

If you’re willing to go domestic, that said, there’s one far more affordable option: the Lotus Esprit. In particular, the S4 generation introduced in 1993. It was yet another iteration of the fabled Esprit, which was originally launched way back in 1976, but a comprehensive overhaul made it a far more refined, usable and capable car. Revisions such as the addition of power steering and a redesigned gear shift mechanism, in particular, made it much easier to drive.

‘It’s a better car and more user-friendly,’ says Geoff Downhill, director of specialists Esprit Engineering. ‘A smart one is a good buy; we see them up with 120,000-130,000 miles now without a problem.’

You might imagine that a svelte Lotus would be outgunned by many a rival but, in reality, its force-fed engine allowed it to outstrip cars such as the 296bhp Ferrari 348tb. Hethel’s 2.2-litre engine punched out a significant 264bhp and 261lb-ft, which was sent to the rear via a five-speed transaxle; on song, and on a good day, the composite-bodied coupe was claimed capable of 0-60mph in just 4.7sec. The Ferrari, on the other hand, took around a second more to complete the same benchmark sprint.

Despite its impressive performance, an Esprit S4 will set you back considerably less than what you’ll pay for what’s often perceived as more exotic and upmarket machinery. ‘For a good S4, that you can get in and drive, you’re looking to pay around £17,000,’ says Downhill – although he notes that prices are often all over the place.

Unsurprisingly, mileage, ownership and age are all key when it comes to Esprit values – and there are plenty of tatty S4s around, so tread carefully. ‘Condition is paramount,’ says Downhill. ‘If an owner’s got bills to prove they’ve been maintaining it then you’ll probably be okay.’

You’ll want, besides the obvious, to check for signs of timing belt changes and see if features such as the air conditioning work properly; fixing it can be expensive. Find a good example, though, and you’ll have your hands on a rare beast – as Lotus built just 625 S4s.

Grab an S4S for maximum punch 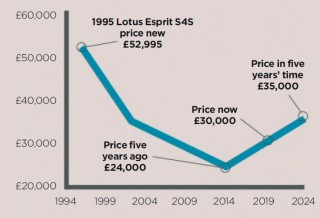 The S4 is a gratifying and capable car, with good spares support, but it’s worth keeping an eye out for the less common and later S4S; upgrades include OZ alloys, Brembo calipers, cosmetic tweaks and a reworked engine with 300bhp. ‘They’re considered to be the best Esprit,’ says Downhill. ‘They traditionally sell for £27k- £32k.’ They’re getting towards being eligible for import to the US, too, which may increase interest.