Two long decades ago, a young Chris Lansbury took time out to view a beautiful Mercedes. Sharp, straight-lined and imperious from its stacked headlight to its slotted disc wheels, the W111 280SE comported itself beautifully in white paint and red leather. Chris was tempted, but not quite tempted enough. “I felt I was too young to own a car like that,” he sighs. “With the way prices have been going of late, it’s a decision I regret!” 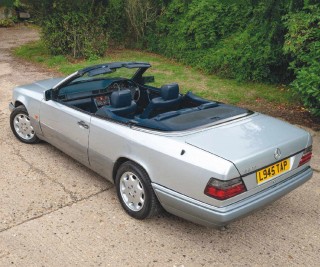 His love of German marques started early. In time, it translated into his own driving history. “Growing up, I was lucky to have a father who always owned the latest Porsche 911 and a mother who drove a Mercedes 190E. Exposure to these cars left a lasting impression, leading to my own roster of Benz-badged beasts!” He counts a G-Wagen, a couple of R107 SLs and a pair of Cosworth-fettled W201 190Es among his former steeds. Various W124s have also found themselves parked on his driveway.

Four years after his encounter with the W111, his head was again turned by a four-seater convertible. This time, it was a W124 drop-top demanding his attention. The car in his sights was a 1993 E320 wearing the taller headlights and integrated radiator grille introduced to the W124 range earlier that year. Dressed in silver over grey coupled with a blue hood and matching leather, the cool car quickly cast its spell.

“I happened to be friends with owner,” explains Chris. “I’d always admired his ride, which was just four years old when his wife chose it as her cherished chariot. It was meticulously maintained throughout the couple’s ownership. They used it extensively, covering plenty of ground and embarking on regular road trips to the Mediterranean.” Sadly, his friend’s wife passed away. The silver stunner remained motionless thereafter. “He couldn’t bring himself to use it,” confirms Chris. “There was so much sentiment attached to the car. It wasn’t benefitting from sitting still, though, which is why he was eventually open to the idea of selling.” 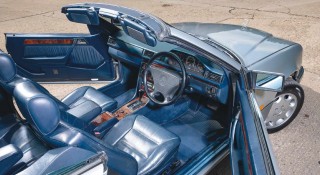 The pair of petrolheads reached a deal before Chris set about a light recommissioning of the W124 he’d loved for so long. The first order of business was a fresh mohair soft-top due to the original roof showing its age. “I sourced it from the same producer who made the roofs for Mercedes in period,” smiles Chris. He winces when we suggest it must have set him back a couple of quid. “It’s true!” he laughs, “but if you want to do a job properly, big spend is often required.”

A full service followed. Anti-roll bar bushes, tyres, brake discs and pads were renewed at the same time. To bring the car back to its best, Chris also resolved the car’s interior niggles, including a swap of the digital temperature gauge, the task of fixing a troublesome seatbelt butler and the reinstatement of the original Blaupunkt head unit. 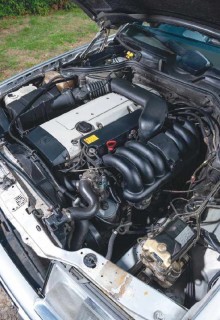 “I’d owned a couple of W124 coupes in the past, but I’d always wanted a convertible,” he continues. “When this particular car was presented to me as available for purchase, I knew I had to have it.”

The choice might seem unusual given his role as manging director of PIE Performance, one of the UK’s leading independent Porsche specialists, but the E320 soon found its place among his fleet. “I can get my young family in and out of the car. That’s a big attraction. Porsche simply doesn’t offer open-top driving in a four-seater which can supply useable space at the rear,” he reasons.

In a world where imitations are common, he’s proud of his W124’s status as a genuine factory-built Sportline. The tantalisingly named specification was introduced the W124 range in 1989, offering keener handling through a selection of suspension alterations. Firmer, shorter springs dropped the ride height by 20mm, hunkering the car over wider-than-standard fifteen-inch alloys wrapped in 205/60/15 rubber. A revised steering box with a faster ratio and three turns between locks further encouraged keen driving, whilst thicker anti-roll bars, firmer struts and a collection of uprated bushes reinforced sporting spirit.

Mercedes also saw fit to give in the Sportline’s interior a luxurious reinvention. Changes included a smaller thick-rimmed steering wheel, electric heated front seats, individual rear seats with a burled wood divider and a Sportline-branded gear knob. “They’re subtle updates,” Chris comments. “Unless you know what you’re looking at, you probably won’t spot them. That said, it’s worth noting the overall Sportline package doesn’t make a W124 handle as well as a Porsche, but you can certainly tell the difference between my Mercedes and a non-Sportline version of the same model.”

Trusting in the inherent ability of a well-maintained W124, Chris promoted his E320 to the role of long-distance loafer in 2017. Over 15,000 miles of use, touching every corner of the United Kingdom and braving the worst of British weather, the mega Mercedes failed to falter. “It’s a fantastic machine and just so practical,” beams its enthusiastic owner. “I can hop into the driving seat at any time and I know the car will always start. I really can’t fault it!” 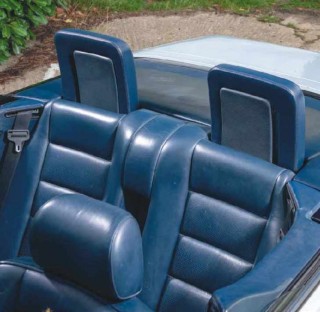 2018 has been less demanding on his excellent E-Class, but that’s not to say the car hasn’t been used to eat many motorway miles during the past few months. Despite this silver sensation’s many merits, however, Chris briefly flirted with the idea of parting with his treasured four-wheeler. “I wheeled it out of my garage and started to carry out a thorough clean when I realised my daughter, Violet, had never travelled in the car with its roof retracted. We dropped the soft-top, jumped inside and went for a drive. She was grinning from ear to ear! When my wife asked what our little girl thought of the car, I answered by saying it was no longer for sale!”

With the Sportline’s future secure, his next aim is to strip back bodywork and treat it to a full respray. Once the work is complete, this wonderful W124 will settle into a new role, ferrying the Lansbury clan to and from their new holiday home in Spain. A recent late night encounter with Chris’s beloved Benz has further galvanised his intention to keep the car for the long term. “I returned home one evening after a day spent at Brands Hatch,” he recalls. “As I pulled into my driveway, I saw the Sportline sitting elegantly in front of my house. It was a perfect picture, and I knew straightaway I was looking at a car I want to keep forever.”

Above Sun out, roof down and al fresco driving on tap! Below With so many imitators around, identifying a genuine W124 Sportline can be difficult.

Best thing about your W124 Sportline It’s one of the last hand assembled, four-seater Mercs

Worst thing about your W124 Sportline I hate those bloody stupid headlight wipers!

The W124 cabriolet didn’t arrive until the 1991 Frankfurt Motor Show, seven years after the saloon first hit the streets. Starting with the coupe’s body shell, Stuttgart engineers added thicker steel in a number of areas before adding a pair of diagonal braces along the new model’s underside. For top-down safety, the A-pillars received extra welded inboard panels, while a rear roll bar was designed to deploy automatically within 0.3 seconds of reigstering an accident. A fabric top and an electrohydraulic lowering mechanism with sixty-one moving parts was also added. The result? In instant modern classic! 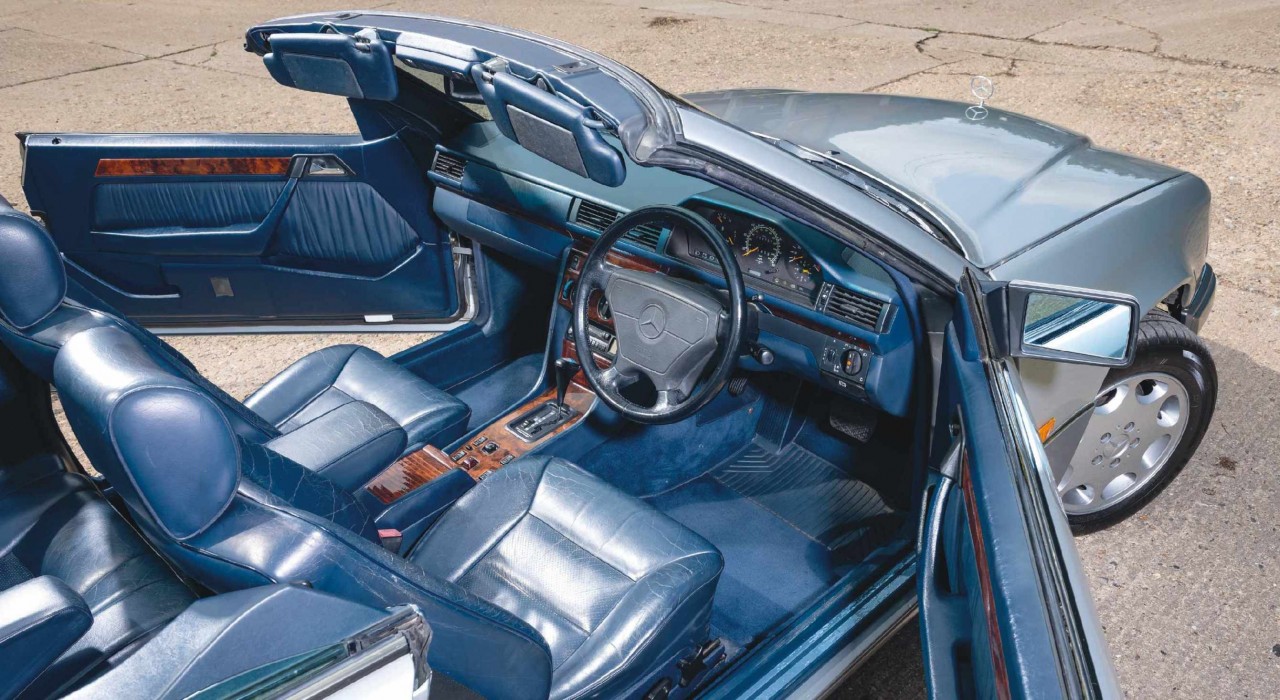 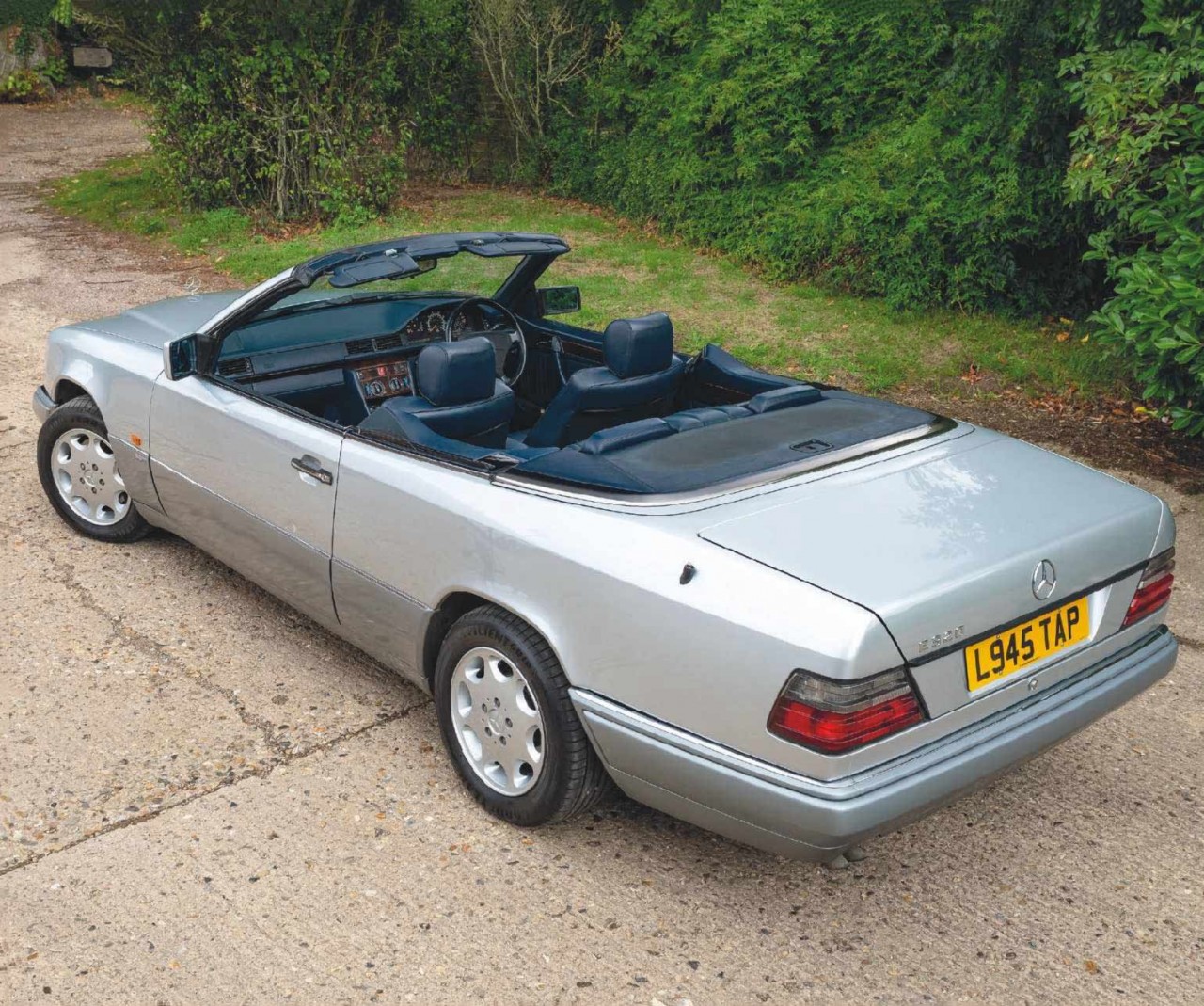 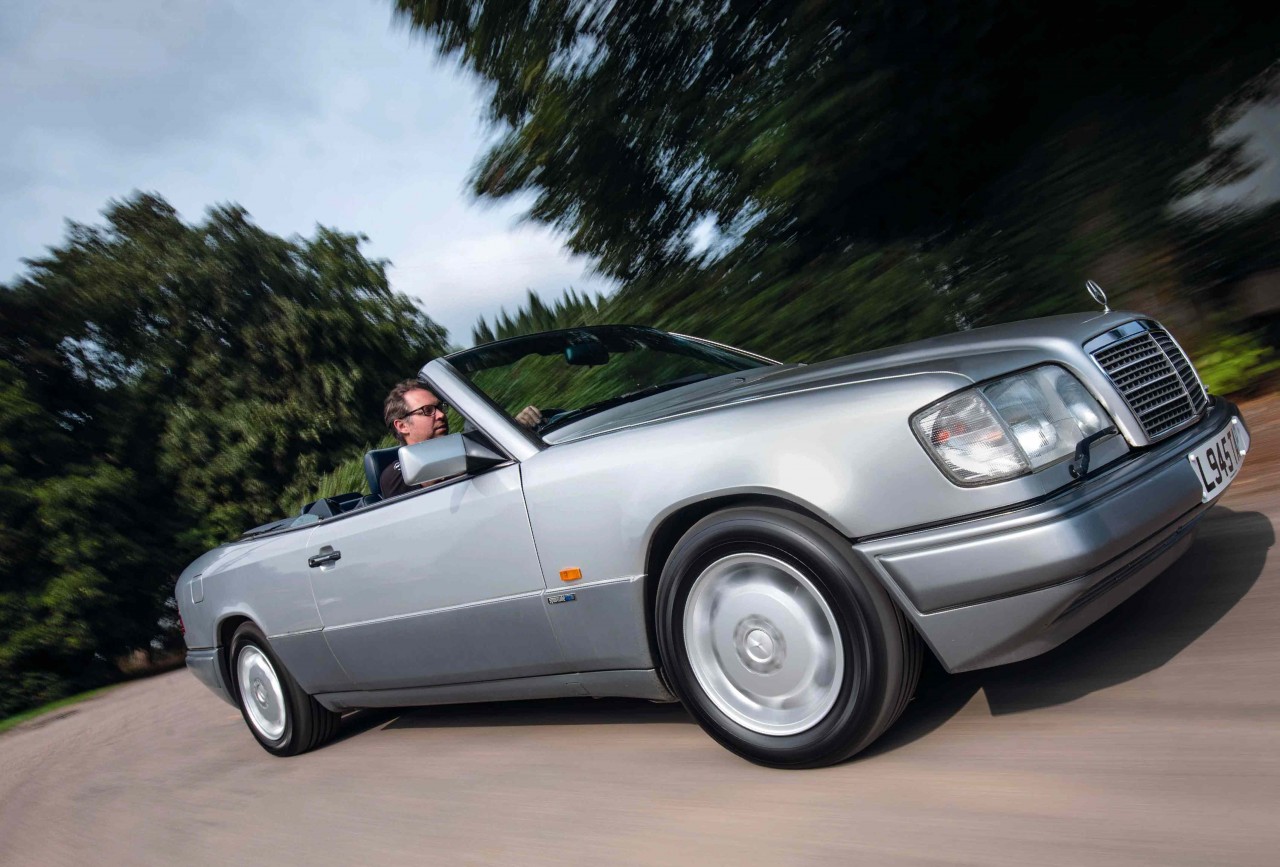 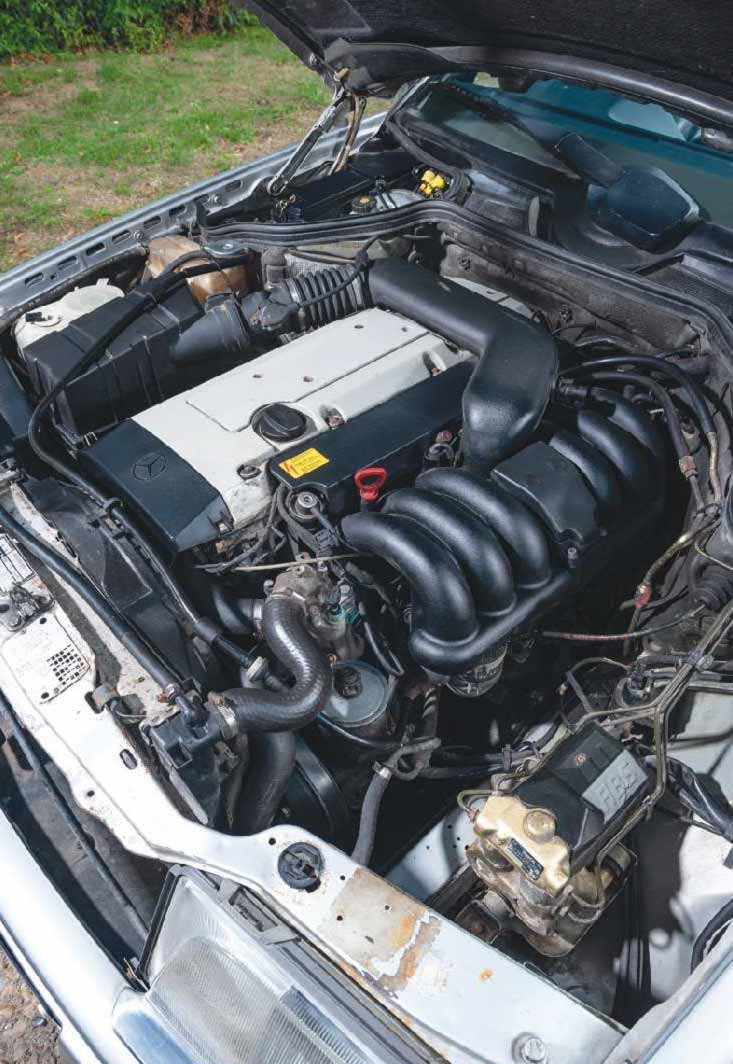 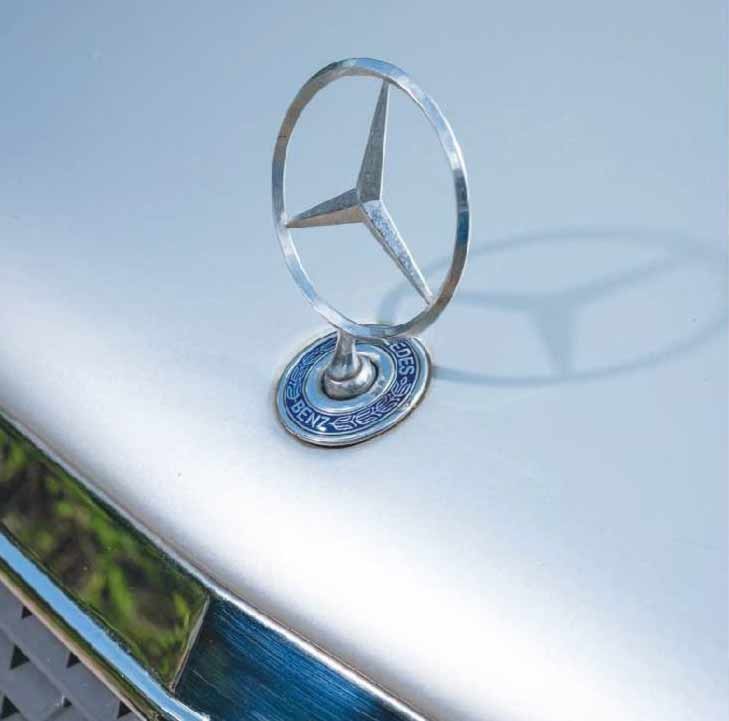 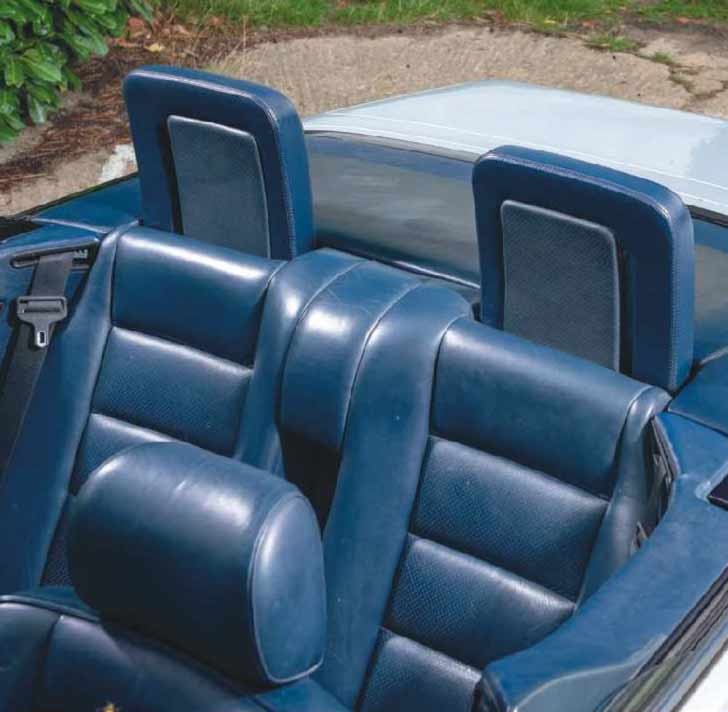 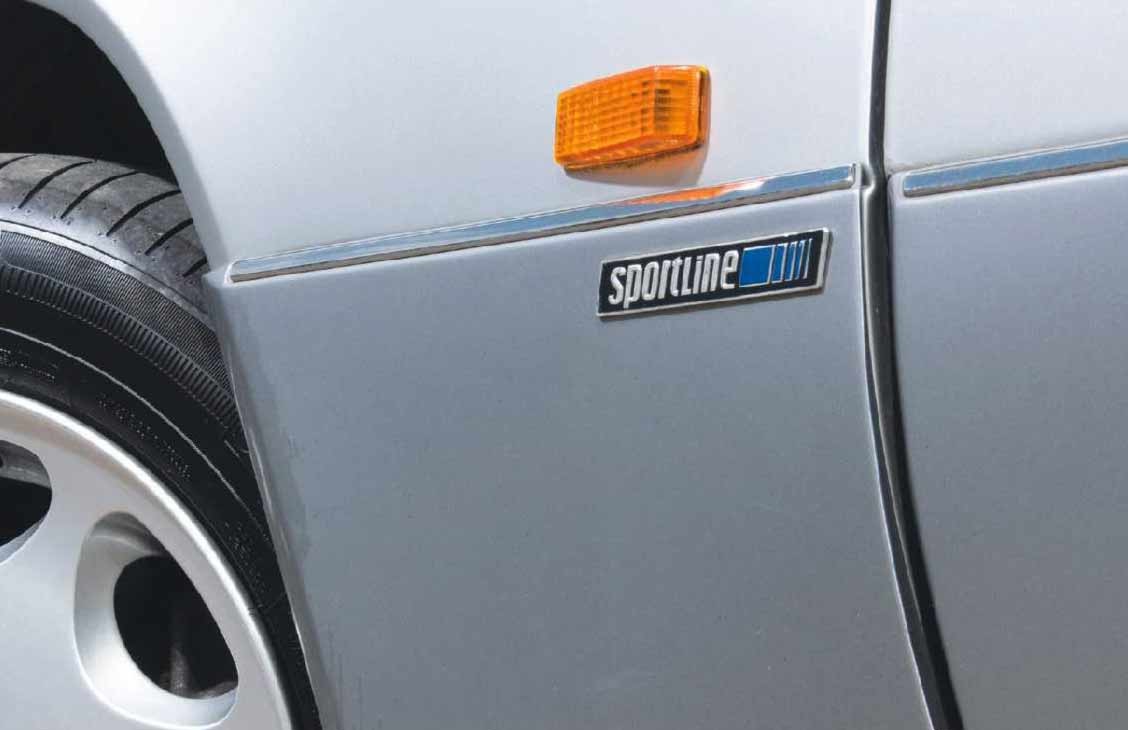 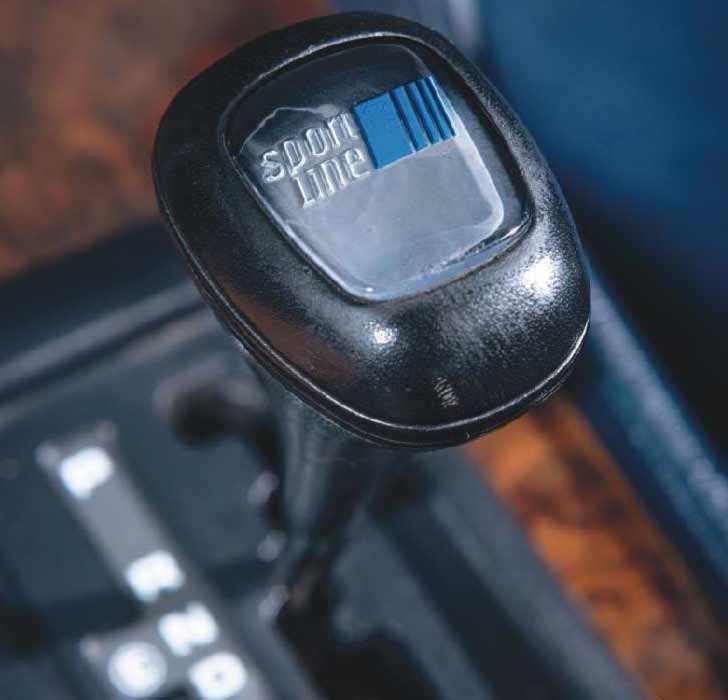 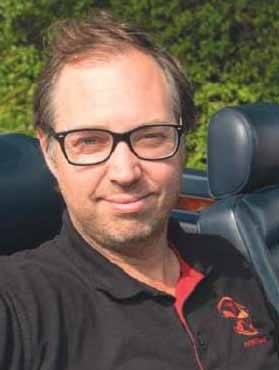