Ferrari is not the name of this car’s manufacturer, but the name of the owners: father and son Sergio and Cristian Ferrari from Bergamo. ‘850’ indicates the displacement and the mechanics are shared with the popular small production cars made by Fiat. 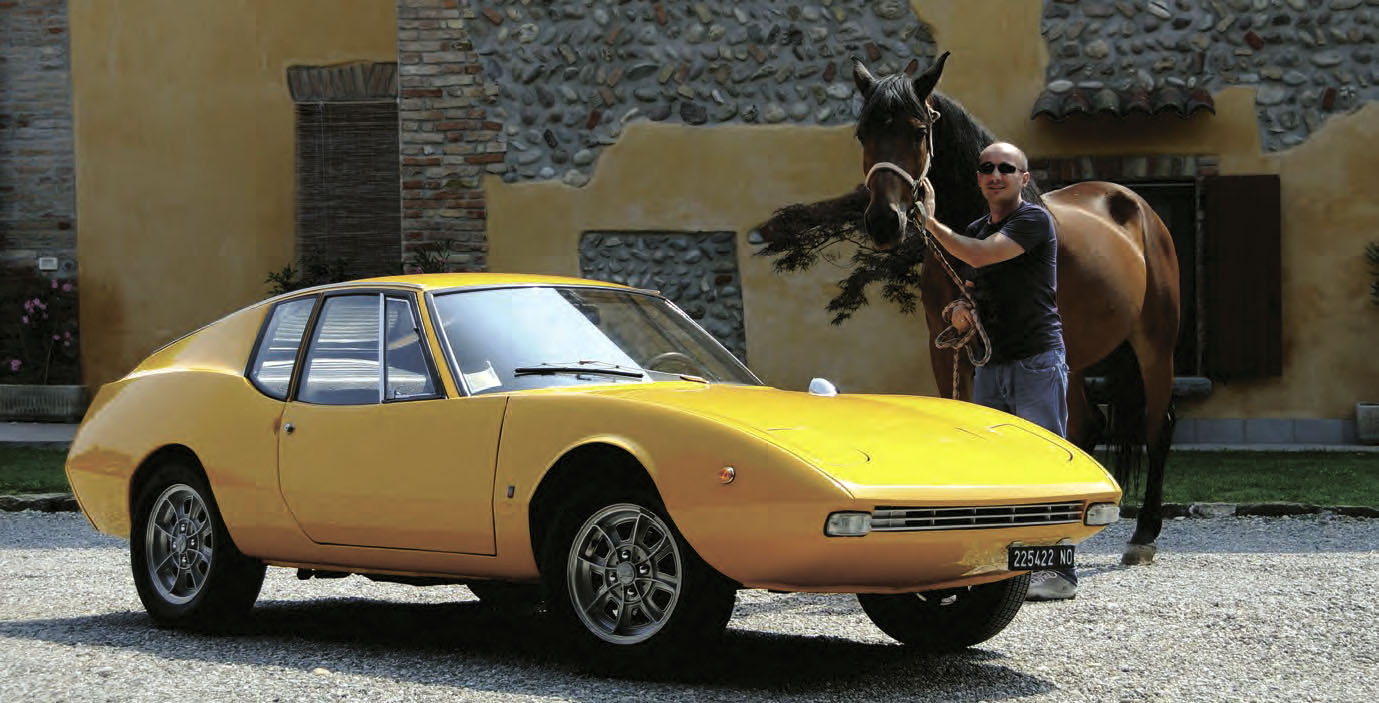 Cristian Ferrari is perhaps the world’s foremost expert on Francis Lombardi designs, he owns several of them and is in a permanent search for new specimens to update his register of Carrozzeria Francis Lombardi cars that still exist. A good part of his knowledge was sourced from former in-house Lombardi designer Giuseppe Rinaldi who worked at the Vercelli’s Carrozzeria for 40 years. Many of the cars produced in Lombardi’s atelier were signed by Rinaldi, including the featured Grand Prix. This small supercar is often credited with Pio Manzù, son of the famous sculptor Giacomo, but it is not true. Manzù was, as a matter of fact, involved with car design at the Fiat’s Centro Stile in Turin, but the design of the Grand Prix is dated November 1967 and was carried out by Rinaldi at Francis Lombardi’s plant before Manzù was employed by Fiat. 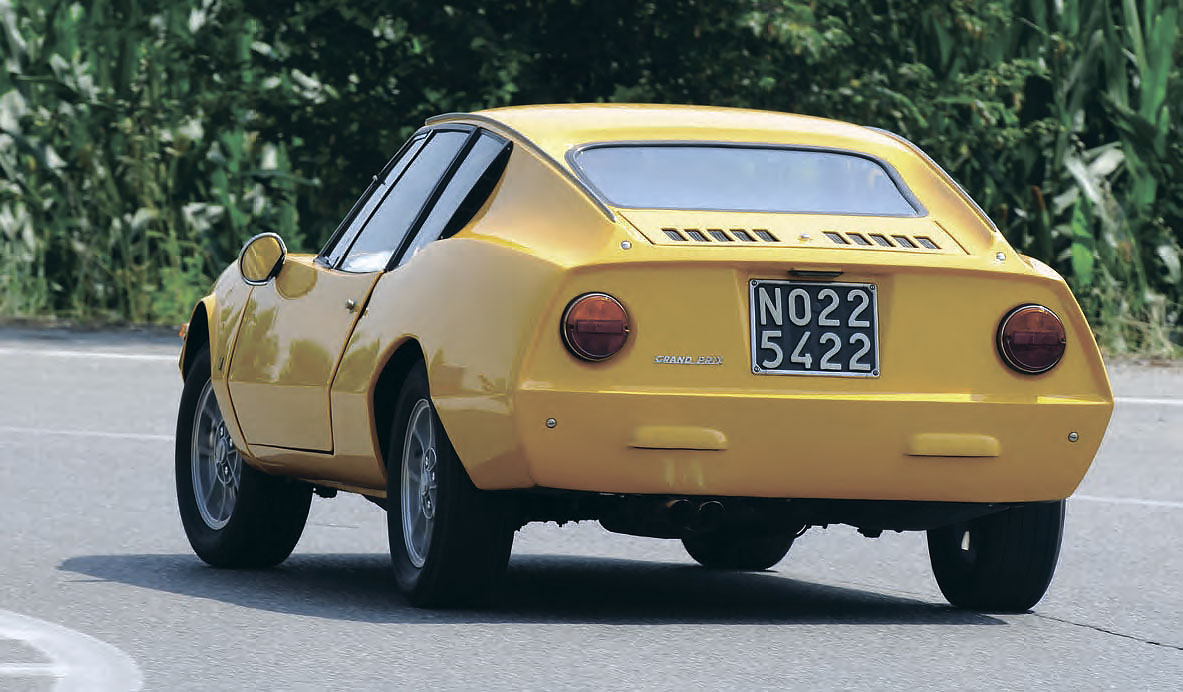 The Grand Prix (provisionally called ‘Dream’ in the sketches) originated after the much criticised Lombardi ‘850 Spider Monza’ was presented at the Turin Motor Show. Partly to keep costs down and partly to make the Grand Prix light and attractive, Rinaldi changed the retro profile of the all-steel Spider Monza into radically modern lines for his new small coupe. Doors, dashboard, seat shells, rear panel and retractable headlight pods were all made from fibreglass. The front and rear panels were in aluminium and the alloy wheels were produced by Ruspa in Turin.

The Grand Prix interior was fully carpeted up to the panel below the rear window, indeed a luxurious provision for a small one-off car, which in the 1960s were typically equipped with rubber mats. The dashboard had the instrument panel unusually arranged vertically in the centre. Normally it would have been finished with a black crackle paint finish but in the Grand Prix it was covered with black fake leather, as were the seats. The custom-made instruments had a white background and black digits. The tachometer and speedometer were provided with warning lights. The two smaller displays were for water temperature and fuel level. To the left were four levers for the single-sweep windscreen wiper, ventilation, control lights and retractable headlights. The indicator and headlight light dip levers were behind the steering wheel. As was customary on many models in those years, the air vents were regular Fiat parts. 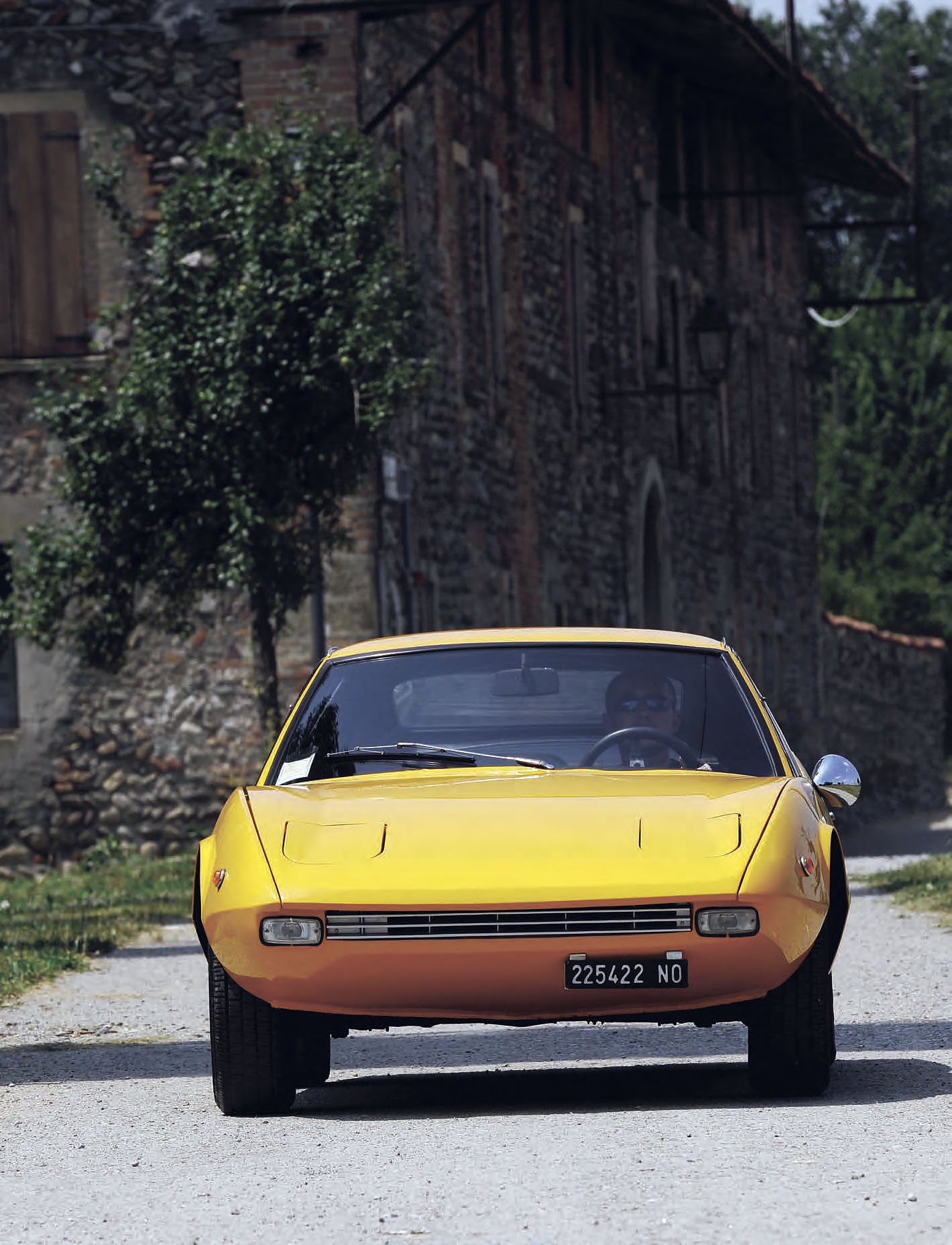 When the second series was introduced in 1970 the seat shells were strengthened and the seats were more comfortable. The passenger seat could not be adjusted, while the driver’s seat slides forward and backwards. The pedal box could be adjusted in two positions. It was the same assembly as the standard Fiat 850 but mounted upside down and fixed to the floor to assist spirited driving.

A great failing of the first series Grand Prix was the lack of ventilation, caused by the fixed side windows. Air flow in and out was only through the side quarter lights. This situation was quite inconvenient, so for the second series Grand Prix it was decided to add a narrow sliding glass panel below the windows. However, the ultimate solution to cure poor ventilation was found by modifying the door panels and adding conventional sliding windows.

Further differences between the first and the second series models were the broader wheel arches to accommodate larger wheels, the ten-slot tail panel for better ventilation, the front bonnet bulge under which was housed the outsized spare wheel, three adjustable metal wings on the engine bonnet replacing the ventilation grilles, and a less exclusive new set of Jaeger instruments signed by Francis Lombardi. In addition there were a few other details both inside and outside. The optional features available on the second series included a heated rear window, safety belts, bumper overriders, anti-theft device and a ski rack. The available colours, as shown in the brochure, were Polo white, España red, Mongolia yellow, Finland green, Malaysia green and orange.

The specimen owned by Cristian Ferrari was restored about 17 years ago at a body shop in Novara after which it was put on the market for sale. Cristian learned about the car ten years later, called the body shop and found out that it had not been sold. He purchased it and drove it back home. It was in perfect shape and fully operational. This car is the oldest of the models listed in Cristian’s register. 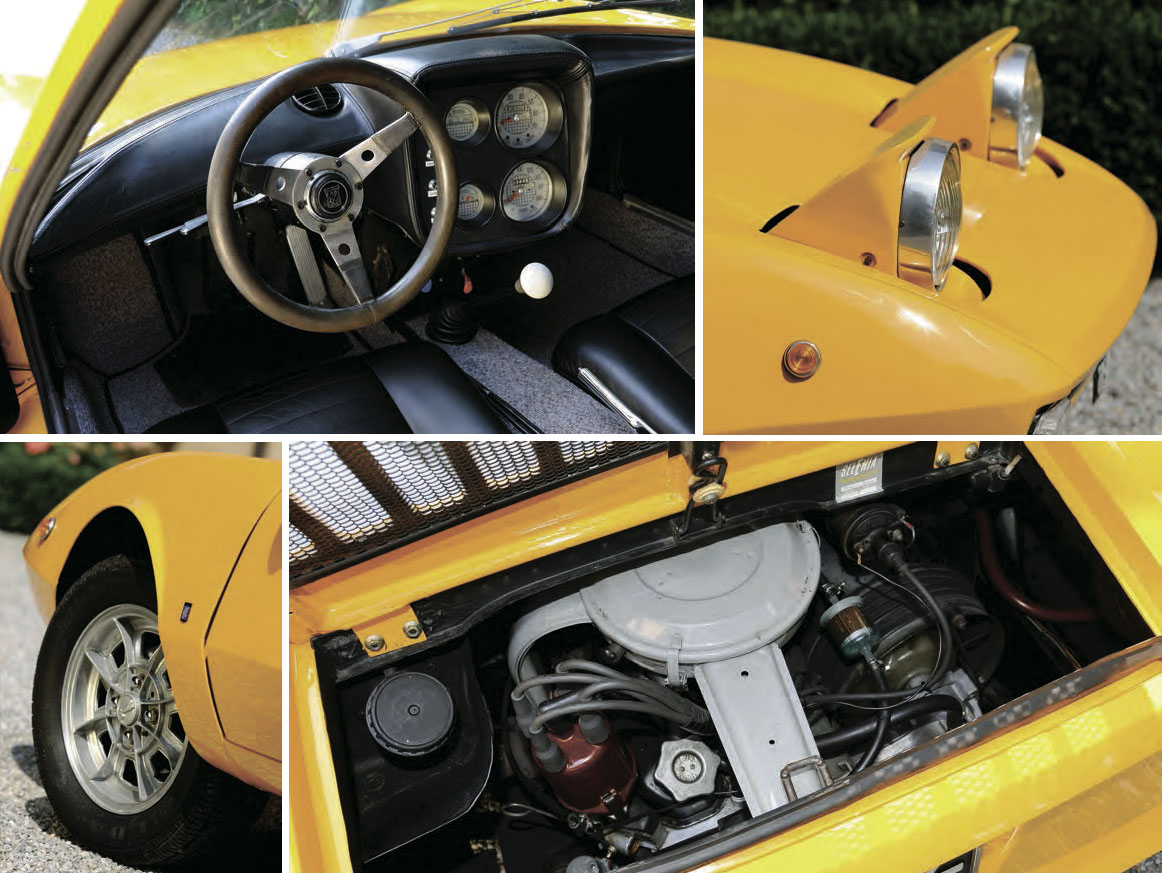 ABOVE: The Grand Prix was an accomplished design and appeared under the Franci Lombardi, OTAS, Giannini and Abarth titles.

Cristian Ferrari organises annual rallies for owners and fans of the Grand Prix. Driving this small Francis Lombardi is pure fun: its driving position, its roar and stretched out bonnet make you feel you are on a Sport Prototipo or even on a supercar. Performance is excellent, considering its capacity, driving is exciting, while fuel consumption – luckily – is that of a 850.

Carrozzeria Francis Lombardi was founded in 1947 in Vercelli by noted racing driver Carlo ‘Francis’ Lombardi. The company was originally involved in aeronautical design, but soon moved on to building cars. From 1950 they focussed on coupes based on the Fiat 1100 and 1400. These models were complemented by station wagons with woodpanelled bodywork based on the Millecento.

Lombardi also built six-seater limousines by extending Fiat 1400 and 1800 saloons for ministerial use. Famously, in 1963 they built a Fiat 2300-based limousine with a glass roof for Pope Paul VI in 1963 – this was the first Popemobile.

Francis Lombardi also developed its own four-door ‘Lucciola’ versions of the Fiat 600, 850, and 127. The carrozzeria’s greatest commercial success was the luxuriously appointed Fiat 500 ‘My Car’ with an annual production of about 6000 cars. Its most significant model was the Grand Prix, which was also marketed until 1972 under a variety of other names such as O.T.A.S. and Abarth Scorpione. Francis Lombardi continued to focus on modifying cars, building coupes on Fiat and NSU platforms. In the 1970s they made special versions of the Fiat 128 and Lancia 2000, The company closed in 1973 and Carlo Lombardi died ten years later. 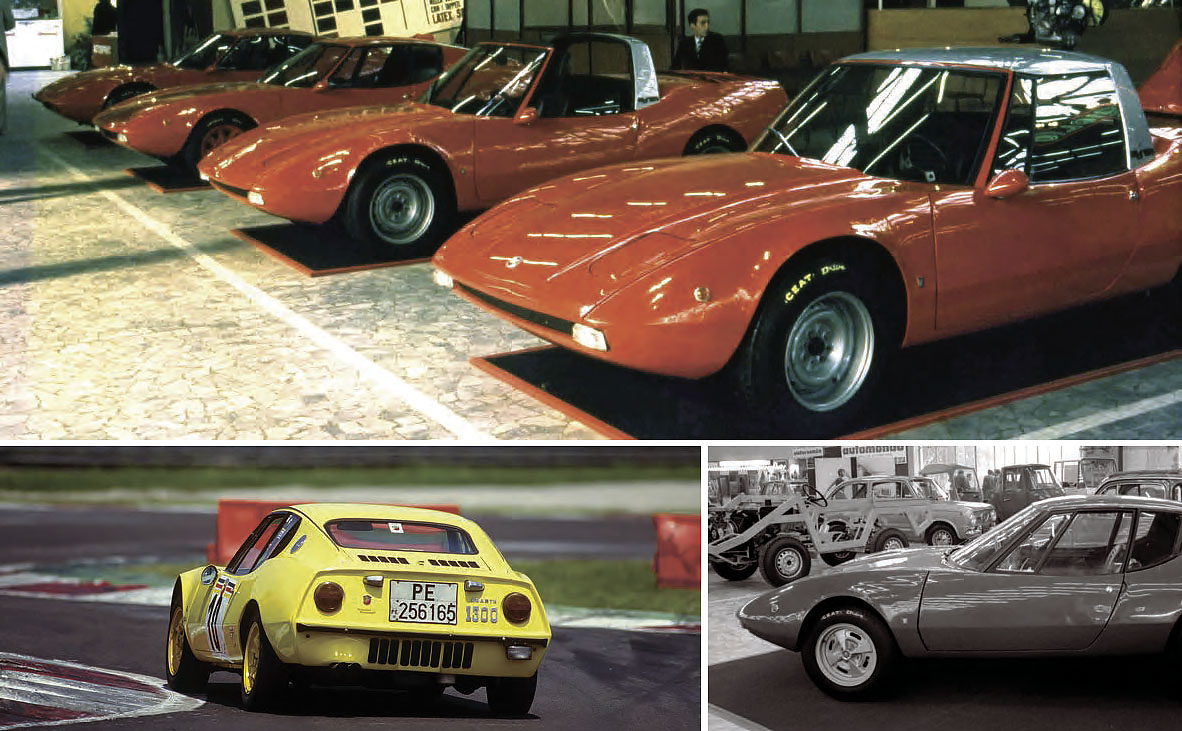