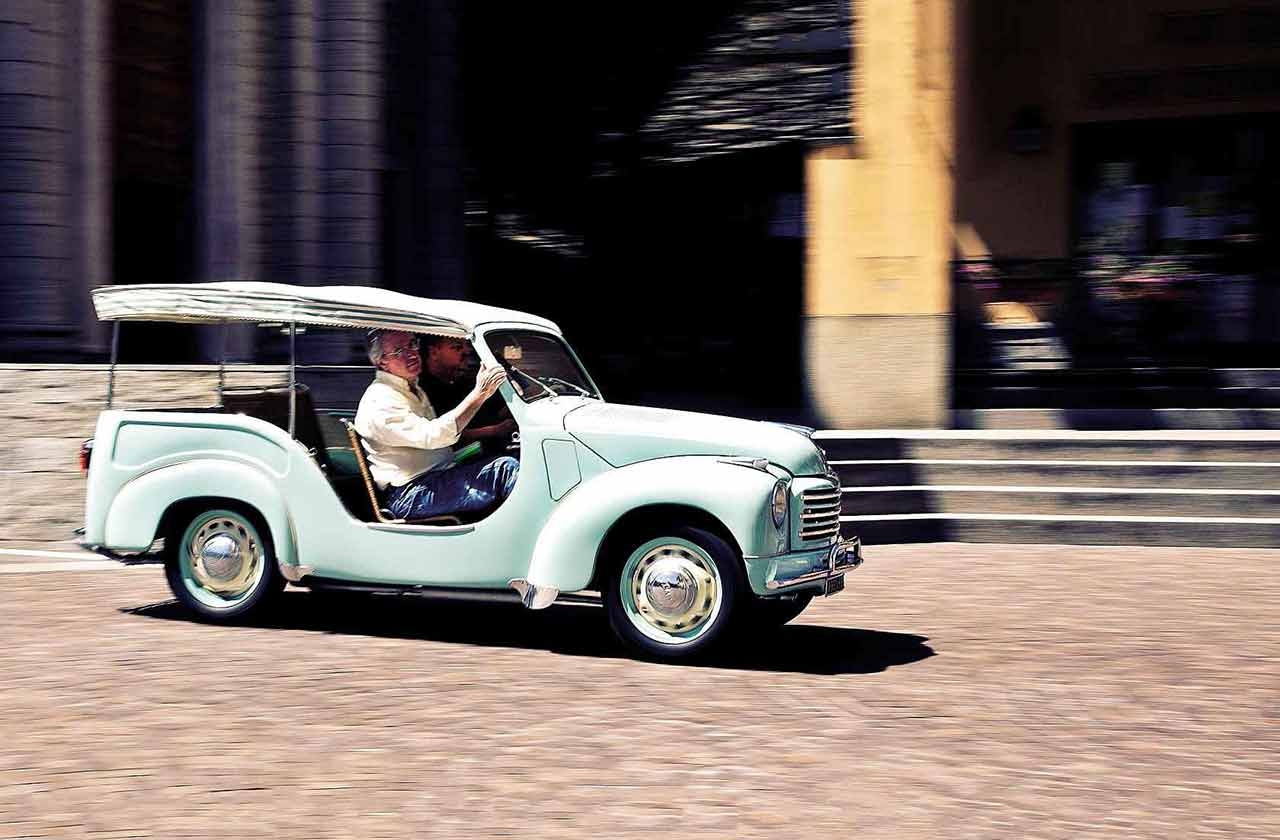 Life’s a beach Call it a Jolly, call it a beach car: whatever you call it, this little Fiat is as much fun as it is cute Words Dale Drinnon. Photography Martyn Goddard.

Better lock yourself in now,’ Emanuele warned me as the tiny Fiat finally crested the hill and started down the other side. ‘Here comes the official top speed test.’ I put on my Serious Journalist face, attached the length of rope that masquerades as a passenger’s door, grasped the grab handle with both hands, and said ‘Go for it’. He floored the throttle and, timidly, the speedo needle crawled past 50, 60, 70km/h, then 75, 78, just twitching across 80 before the levelling road snatched it southward again. That’s 50mph, gravity-assisted. Or 49.7, to be exact. ‘There we are,’ he announced, with a grin and a suitable flourish, ‘Warp Factor Three.’

And I gave him my best thumbs-up before pointing out the obvious: ‘But we still didn’t catch that cyclist who passed us on the uphill section.’ Emanuele waved away the vulgarities of mere reality. ‘OK, it isn’t so fast,’ he replied, ‘but how could the cyclist possibly be having this much fun? And maybe that’s the title for your story, yes? Call it “Jolly Good Fun”.’ Then he hesitated for a beat. ‘Except here in Italy, you know, this isn’t a Jolly… It’s aspiaggina…’

Which is where Serious Journalism must briefly divert us, I’m afraid, from the delights of touring beautiful Lake Como in the rolling automotive definition of ‘carefree’, to attend to some history and context. We English-speaking non-Italians are largely familiar with the post-war Fiat Jolly, that jaunty series-produced micro-car-cross between self-propelled supermarket trolley and sidewalk café awning beloved over the years by beach resort hotels, Riviera estate owners, and any film-maker who wanted to say ‘Look, look!

Sun. Sand. Sea. Beautiful People!’ As practical transport it was virtually useless; as chic holiday runabout it was simply without peer. But few of us know the Jolly wasn’t the instigator, it was the reaction. While details are sketchy, coachbuilt one-off leisure vehicles of that sort had been around Italian car culture long enough, even pre-Jolly, to earn their own noun in the language:spiaggina. Derived from the Italian word for beach – spiaggia – it translates literally as something like ‘beachy’, and idiomatically as ‘beach car’, and a long list of the rich and stylish accessorised their oceanfront properties with the little choppeddown flights of whimsy. Well, why not?

Legend has it, in fact, that Fiat boss Gianni Agnelli, the very paragon of rich and stylish, made them trendy in the mid-1950s by keeping a bespoke Fiat 600-based example on his yacht and winching it down, motor launch-fashion, whenever recreations ashore took his fancy.

Carrozzeria Ghia introduced a similar vehicle on the 600 platform in 1957 or ’1958 (reports vary), named it the Jolly, and soon added an edition made from the next-generation Nuova 500. Ghia produced more than 400 of them before wrapping up late in the ’60s, and the expressions ‘Jolly’ and ‘beach car’ became synonymous outside Italy in the process.

Demand was sufficient to yield a variety of market alternatives as well, though always in limited numbers. Many more of the established design houses, Pininfarina and Vignale included, built spiaggina conversions. Pininfarina’s Multipla-based ‘Eden Roc’ of 1956 was probably the most exclusive, apparently comprising only two units, the first of which was created for Agnelli’s Mediterranean villa and the second for the EL Cord family retreat – although rumours say a third went to Henry Ford II.

At one point it seemed everybody who owned a hammer was beating them out, some of them quite odd indeed. Giovanni Michelotti’s wanton defilement of the lovely Fiat 850 Spider was particularly loathsome, as was the judgement displayed by Jackie Onassis when buying said abomination. Other brands from other countries naturally served as conversion donors, too, such as the Renault 4CV and Britain’s own solid, forthright Mini.

Few machines could have been a more appropriate candidate, however, than the Little Mouse, Fiat’s original 500 ‘Topolino’. Lots of them became Jolly-esque via one hand or another, and Emanuele found his during the liquidation sale of a local Topolino museum 15 years ago. As a life-long enthusiast, dedicated collector, auto industry insider and former organising board official for the Villa d’Este concours, he bonded with the little darling immediately. ‘It’s such a happy car,’ he says. ‘It looks like an ice cream.’

While the exact background of Emanuele’s Beach Topolino is uncertain, it would appear to have been converted in-period. A full restoration was performed by the museum, and the only mileage accumulated since has been around the shores of Lake Como (five kilometres at a go is the ideal day’s travel, according to Emanuele).

Constructed atop a 1954 Fiat 500C Belvedere, an all-steel rendition of the Topolino van and estate body that followed the woody-style Giardiniera version, it has room for four adults and all their sand buckets and flippers, in theory. Then again, the 500C was good for 60mph. In theory…

Not that the performance numbers matter greatly. Baby Fiats of the late lamented analogue era were invariably a hoot, and this one does the tradition proud. The paltry 16 horses (actually 16.3) might be severely challenged just overcoming the resistance of strong head-on sunlight, but they’re smooth, willing horses nonetheless.

The gearbox is completely friendly, with positive throws and a pleasingly vintage up ’n’ down element to the shifter action. Third and fourth are firmly synchronised, second is amenable to double-declutching – you’ll never, ever need first unless you’re completely stationary, trust me – and the pedals are properly spaced for heel-and-toe.

Steering response is light and accurate and the four-wheel drums, let’s face it, are probably three drums more than this car really needs. Despite the minuscule horsepower and golfbuggy terminal velocity, though, never forget that Topolinos flooded the field of every Mille Miglia almost from the model’s launch in 1937. Any Baby Fiat fan will be enchanted from the second they slide behind the huge ’Deco steering wheel.

Of course, the point of any beach car is not so much driving as seeing and being seen, and at this our faithful Fiat is a superstar. Italians are eternally sweet on Topolinos anyway; after all, they nicknamed the car with the Italian term for Mickey Mouse. Add in the archetypal spiaggina wicker seats, jaunty canvas lid and cutie-pie colour scheme and you have maybe the only attraction in Italy that could steal a Ferrari’s thunder. Buzzing it from lakeside coffee shop to trattoria to gelateria on a flawless summer afternoon is an ego stroke to match regaining your original hair and fitting into David Beckham’s wardrobe.

And yes, as the perfect ending to the perfect day, we finally redeemed the honour of Baby Fiats everywhere and overtook an entire pack of full-on, Lycra-clad, race-ready cyclists. That they happened to be relaxing in the shade with caffè and biscotti at that moment didn’t bother us in the slightest, either.

‘As practical transport it was useless; as chic holiday runabout, it was simply without peer’

‘The point of any beach car is not so much driving as seeing and being seen, and at this our faithful Fiat is a superstar’