In 1979 Michael Longley was driving between his home in the Ashdown Forest and Crawley, traversing a pretty bit of East Sussex in his mustard-coloured 1976 Jaguar XJ6. He ran a successful family building firm and had enjoyed a succession of large, high-quality saloons from Mercedes-Benz and Jaguar, but on this morning he saw something different.

‘There was this stunning gold nugget on the forecourt of the dealership I passed every time I made that trip, on the corner after I crossed the A22,’ says Michael. The nugget in question was a late 1978 Lotus Elite 503, probably the most desirable of the Elite range to an enthusiastic driver. The base model was the 501, the 502 added air-conditioning and the 503 had this feature plus power steering. The 504 added a three-speed automatic transmission. After a few ‘fly-pasts’, Michael felt it might be time to obtain consent for a new company car, and stopped to find out more about the Lotus. ‘The sales manager said the price was about to go up – inflation was rampant in those days. I made the decision and the company paid £14,000 for it, on the road.’’

The Elite was probably the most expensive fourcylinder car in the world at that time – £14,000 was £5000 more than a Lancia Gamma Coupé or a Porsche 924 and £500 more than a Jaguar XJ12. The Longleys bought out their company Jaguar for use by Rosemary, Michael’s wife, and it gave good service towing the horsebox. Michael, meanwhile, enjoyed many satisfying miles in the new Lotus, with only one or two foibles. 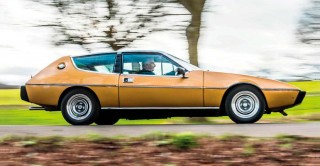 ‘The clutch is cable-operated, and that cable chose to snap one day. But it did so at a time that allowed me to drift neatly into a parking space. Years later, when Rosemary was driving, it did the same thing again, this time depositing her in a pub car park.’

Its performance and dependability convinced Michael they had got a good one, but when MoT time came around in 1983 there was shocking news. Going by Lotus lingo, the Longleys’ Elite was a Type 75. This defines it as having a 1973cc engine and various other features seen on cars made between 1975 and 1980, when the Type 83 Elite took over. The Type 83 used a 2174cc version of the engine, but much more importantly for the longevity of the car, it featured a galvanised chassis.

The Longley’s car missed out on this feature by a single year. In 1983, after only four years, the chassis was found to have rusted through in such a way as to make repair either impossible or uneconomical. This, of course, came as a nasty shock to Michael.

‘I spoke to the dealer and tried to get the chassis replaced under warranty. In the end, he succeeded in getting us a galvanised chassis as a warranty claim, but the labour charges were something I had to cover.’

Other work, including some renovations to an already-tired gearbox, brought the bill to £2300; hard to swallow with such a new car but in the end a sound investment if the car were to remain with the family.

And it was – Michael had enjoyed the Lotus’s poise, performance and comfort for those four years but he was ready for a change and the Lotus was due to be replaced with a leased BMW 528i E28. Rosemary took the Elite on as her own daily transport and the Longleys bought it from the company. ‘I think we paid £4000 or so for it,’ says Michael. ‘It was still in excellent condition.’

‘My love for cars started in the Seventies with a Capri 3.0-litre in the same colour as the Elite,’ says Rosemary. ‘It was very fast but it got light treatment from me, as I tended to use it for driving two elderly aunts around on days out. Then the floor rusted through and we sold it to a carpenter, but when Michael felt like replacing the Elite with something new I was very happy to take it on.’

Rosemary had to share the possession of the Elite with Coco, their black labrador, who seemed to regard it as hers to defend. ‘The dog used to bark if anyone came near,’ says Rosemary. She enjoyed the attention the Lotus received, even if some of it was a bit of a challenge, as Rosemary recalls. ‘Somehow I would always get a parking space. People would make room or let me into the “No Parking” area when I was in the Lotus. But young men were often keen to race me… I suppose I was blonde and good-looking in those days!’

For all the benefits that being a Lotus driver brought, the car’s status as a four-seater was always marginal, especially for those of restricted mobility. Because Rosemary still had elderly relatives she took for days out, the Lotus was proving less perfect in its role as a people carrier. ‘My aunt did find it hard to get in and out of the Elite, and then the garage we used for servicing closed down, so it seemed time to part with it,’ says Rosemary. A replacement arrived in the form of a Toyota Celica that Rosemary still has in 2016. ‘It’s a bit easier than the Lotus but still sporty. I hate sit-up-and-beg cars,’ she says. In 1990, Michael advertised the Elite in the Club Lotus magazine for £5500 and soon found another buyer looking for an interesting car for everyday use.

Peter Russell has ‘Lotus’ written right through him, like letters in a stick of rock, according to his wife, Sharon. ‘I built a Ginetta G15 from a kit in my early twenties,’ says Peter, ‘but what I really admired was the Lotus Europa – I thought it was the ultimate.’ The Russells had a Europa when they were first married, but it fell into disuse when children arrived and was eventually sold. But in 1990 Mrs Russell returned to work and needed a car for the commute. Here was a chance to bring a Lotus back into family life. ‘We made the decision to look for an Elite,’ says Peter, ‘and soon a mate phoned and said there was an advert in the Club Lotus magazine.’

Peter phoned Michael straight away and made his decision. Evaluating their new purchase was a team effort – Peter is good with the mechanical bits, Sharon has an eye for paint. Both gave the Elite the thumbs-up and it came home, not as a classic but as a family car.

‘We just thought of it as a nice example of a secondhand Lotus,’ said Peter. ‘Sharon put it into use straight away.’ ‘We must have used it for the school run,’ says Sharon, a little bemused by the idea in the modern era of Isofix child seats and three-point belts. The kids would have been about 10, eight and seven and I remember them riding on the console between the rear seats.’

This happy phase didn’t last long. Access to Sharon’s place of work took her over large speed-bumps. ‘The bottom of the car was suffering,’ she recalls, ‘I never got on with the hefty manual gearchange – especially when Peter was in the car. I was always tense in his presence… he was wincing. So I got a little hatchback instead.’

Early in the Nineties the Elite’s role had changed from that of family car to weekend classic. It was released from the school run and used for outings to Club Lotus events, during which it occasionally showed the Russells that they’d been wise to retire it from daily use.

‘The first time we won a prize with the car was at an event in Cumbria in 1992,’ says Peter. ‘We were driving back when the belt that ran the power steering, the water pump and so on came off. We were stranded on the M6 and I had to call my father to rescue us.’

‘Not long after that,’ adds Sharon, ‘the gearstick came off in Peter’s hand.’ Rather than being put off, Peter grew to love the Elite and put it to regular use ferrying friends to the British Grand Prix, London to Brighton events and the Silverstone Classic – four up, all the way. The Elite has even had to perform the sad task of rescuing friends on a club run when their own Elite caught fire and burned out – no one else had a four-seater car.

Over 26 years of ownership, Peter has put a considerable effort into keeping the Elite looking its best and working as it should. ‘I’ve done two gearbox rebuilds – it’s Lotus’s own box but with an Austin Maxi fifth gear and it’s not the strongest. I’ve done a rear axle rebuild, fitted a new radiator, a new wiper wheel box that Lotus suggested could be reached by sawing a hole in the bulkhead, then the nightmarish job of rebuilding the inboard drum brakes at the rear and those Austin Maxi rear wheel bearings, which last only 6000 miles.’

Peter reckons that he and Sharon have won more than 20 trophies with the car, even if luck hasn’t always been with them. ‘We were in Wales for a show and the car looked good during judging,’ says Sharon. ‘But as soon as we’d been given the prize, the headlining collapsed.’ Driving back with it resting on their heads was only the beginning of the trouble, as Peter recalls. ‘My brother-in-law is a trimmer and he came over to give me a hand replacing the headlining. We were shut in together and the fumes from the glue nearly got us… we came out rolling about, all pink, laughing our heads off.’

Over 37 years, two families have become very attached to this car. Peter Russell has added another Elite, a 504, to a fleet that now also includes an Evora and an M100 Elan, but does that mean the gold 503 is off? No chance. It’s part of the family.

Thanks to: Michael and Rosemary Longley, plus Peterand Sharon Russell.

‘The fumes from the glue nearly got us. We were all pink, laughing our heads off’

Peter Russell and pal Les Bodily ready for a trip.

First day of Russell ownership in 1990.

Michael Longley took the Lotus out of daily use – your turn, BMW 528i E28.

It may not be the most spacious four-seater, but the Elite was a handy people mover.

Post-concours victory marred by motorway stop for Peter and Sharon in 1992.

Stubby gearstick once came off in Peter Russell’s hand.

It may have only four cylinders, but Rosemary Longley loved the speed.

‘The dog used to bark if anyone came near’

Coco the labrador stands guard over ‘her’ Lotus Elite.

Careful maintenance kept this Lotus Elite working for its keep.

The Longley family gets acquainted with the Lotus Elite in 1979.