Lancia made cars that were different and clever – if not always cheap to buy or own – but now decent Flavia saloons can be had for around £2000 and coupés for closer to £4000, making them bargains in the current market. With its exclusive lightweight aluminium flat-four engines, front-wheel drive and four-wheel disc brakes, the Flavia was unique among compact saloons of the Sixties and enjoyable to drive. 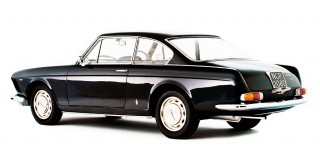 Lancia made 29 different variants between 1961 and 1974. There were three engines – 1488cc, 1800cc and 2000cc – with several variants of each, and different states of tune with single or twin carburettors, or mechanical or electronic fuel injection. And there were many changes of body styling.

Pininfarina Coupé (above) Resembling a mini-Ferrari 250 GTE, the 1962 2+2 Coupé had a 90bhp twin-carburettor engine, though it was difficult to set up.

Nardi soon offered a boost to 1727cc, which Lancia copied, before swapping to the new 1800cc single-carburettor engine in 1963. It proved successful (19,293 built to 1968). Fuel injection was optional from 1965 (or you could choose a Nardi twin-choke Weber upgrade).

Vignale Convertible Also launched in 1962, the charming four-seater convertible was styled by Giovanni Michelotti; just 1601 were built to 1964.

Sport Zagato Truly flamboyant, complete with negative curve electrically-opened rear window, the 2+2 Zagato was 100kg lighter than the Coupé with a 111mph top speed, rising to 118mph with the final twin-carburettor 1800s. 726 were built, rather shoddily.

819 Berlina Sleeker styling with a larger boot and higher windows came in 1967, plus the option of power steering. 1488cc or 1800cc engines were supplemented in 1969 by a two-litre with 114bhp on carburettors or 126bhp on Kugelfischer injection. 20,405 were built.

Flavia 2000 Fiat rationalised the line in 1970 to just the 2000, with new Girling twin-pot brakes and a new gearbox with diaphragm clutch. Just 706 were built.

Lancia 2000 Fiat dropped the Flavia name with a restyle, smaller 14-inch wheels and a much-improved interior. A five-speed gearbox was soon added and Bosch D-Jetronic became the fuel injection option. Production ended in 1974 with 14,319 built.

Others Lancia made around 3000 Super Jolly vans with Flavia running gear; Francis Lombardi made a couple of stretched Berlinas and Zagato made a number of prototypes for a new Sport Zagato in the late Sixties.

Rust Like most cars of the era, rust is the Flavia’s biggest enemy. No rust protection was provided on early cars and rear wings rotted rapidly. The Sport Zagato with its aluminium body suffered severely with electrolytic corrosion causing doors to drop and windscreens to crack. Flavias are extremely strong and can rust extensively before it becomes obvious, so inspect very carefully. Check everywhere, but especially the wheelarches, sills, floorpan, rear leaf spring mounts, rear chassis rails, box section across under the rear bumper, bottoms of doors and the square tube front subframe. On the 819/820, box sections up in the top corner of the front wings adjacent to the bulkhead rust badly.

Engine This is an oversquare all-aluminium flat-four with wet cylinder liners and a camshaft for each bank of overhead valves. Its subframe is attached to the body with six soft rubber mountings. It’s not an easy engine to work on because of its layout and location, but is generally reliable. Problems can occur when the gaskets at the bottom of the wet liners deteriorate, allowing the liner to drop slightly, breaching the cylinder head gasket seal. Putting this right can cost between   £1000 for simple re-seating and £5000 for a full rebuild. Check carefully for signs of head gasket failure – look for emulsion in the radiator and oil filler cap. If all seems well, give the car a good run to warm the oil and check that the oil pressure is to the centre or right of the gauge when on the move (near-zero at idle is normal; gauges can be unreliable). Listen for a noisy timing chain; if allowed to get extremely worn it can jump when cold, causing a catastrophic clash of valves and pistons.

History This is crucial. Has the car been well maintained? If a liner seal failed, were all four replaced, or just one bank – or even just one cylinder?

Kugelfischer fuel injection This mechanical system causes trouble if worn but can now be overhauled by Lucas Development. If a car has been converted to carburettors, check that it has been done properly with all the correct parts – now that values are rising, it is worth restoring the injection system.

Interior trim This is predominantly plastic and unobtainable (cloth came later), but can be retrimmed fairly authentically by a specialist trimmer; obviously it’s better to find a good, well-preserved original. The dash top rail and door tops are prone to cracking. There were numerous different dashboard layouts, starting with strip speedometers and ending with round ones; parts are largely unobtainable but most things can be rebuilt.

Gearbox Flavia gearboxes are robust but synchromesh wear can spell a £1500 bill for removal of the gearbox, replacement of synchromeshes and seals and refitting. The same job with new bearings is nearer £3500.

Brakes Dunlop discs all round mean that the braking should be excellent – if it isn’t, work will be needed. The tolerances on these brakes is extremely tight so they do seize up readily if not used frequently – and Lancia used a specific servo which is very complex and can be unreliable. It’s normally rebuilt as a pair with the master cylinder, costing £1200 (alternatively, substitute a remote Girling servo). For the 2000. Lancia converted to Girling four-piston calipers at the front and the handbrake in a separate (rear) drum, for which special tools are needed. With a different servo it’s a much more reliable system – except for the handbrake.

Door locks These wear out and are difficult to get right; electric windows (where fitted) are also temperamental.

Suspension This comprises a transverse leaf spring with twin wishbones and an anti-roll bar up front and the rear featured an anti-roll bar and a Panhard rod on a dead axle mounted on leaf springs. There are telescopic dampers all round The front wheel bearings are difficult to change, requiring special tools, which can be hired from the Lancia Motor Club or Omicron. All bushes and bearings are available. Check the steering box and particularly the idler for wear.

Exterior brightwork This is largely stainless steel and lasts very well, but parts are hard to find if missing or damaged (as are some lights and lenses).

Exhaust This is low and vulnerable to damage. Convertible hoods These are custom-made and hence expensive; a full hood replacement is a tricky exercise and likely to cost around £2000.

Cooling If well maintained, this system is trouble-free but check that the thermostats are working properly – both the conventional one on later cars that operates the electric fan and the one on early cars that opens the radiator shutters.

‘Although recognised as a high quality car, the Flavia saloon never won any prizes for automobile beauty. So Lancia asked Pininfarina to design a 2+2 fixed-head coupé on a shortened wheelbase, which would make up in elegance for everything that the saloon lacked.

‘I bought my 1966 Coupé [photographed in this feature] in 2010 – it had been previously owned by members of the Lancia Motor Club, so had a good history. During my ownership the brightwork has been improved and a few electrical problems have been resolved, but nothing too serious. I budget approximately £1000 each year for the MoT, servicing and any running repairs. The car handles superbly and is very smooth and comfortable to drive on all road surfaces – it is a true GT with typical Italian lines.

‘Rumour has it that Rolls-Royce once bought and dismantled a Flavia to see how it was made, and couldn’t understand how Lancia could produce a car of such high quality for the price. I would recommend the Flavia to anyone who wants a well-engineered classic car, but you’ll need to be quick because there aren’t many left.’

‘I have always been a Lancia fan, but never had a Flavia until last year when I found a low mileage, rust-free, early 1500 Berlina, still with its Italian owner. I drove it back from Rome and it never missed a beat. ‘Providing you have the correct papers, importing a classic from the EU is easy. Fiat supplied a letter confirming the date of manufacture and that, along with an inspection by the Lancia Motor Club, was enough to persuade the DVLA to issue an age-related registration number. Job done.

‘On returning home the ‘see to’ list was comparatively short, and most parts easily available. The Dunlop brake calipers were stripped and fitted with new seals/pads. Reconditioned wheel bearings replaced the worn items that had rumbled their way happily back from Rome and new bushes were fitted to the front and rear anti-roll bars. The only special tool needed – a hub puller – was hired from Lancia Motor Club. ‘The total cost, fully sorted, was under £1000, which when added to the original purchase price, fuel, plus our impromptu four night holiday, came in at a smidgeon under £7000.

‘The Flavia Berlina may be no sports car, but it’s comfortable and economical. It’s perfect for those long cross-country journeys to the Le Mans Classic when the sun is shining and time is of no consequence. There’s no better car.’

‘I’ve long had a love for Lancia and have three different Fulvias. Last year, through a chance conversation with a friend, I acquired a super-rare Kugelfischer-injected 1800 Flavia Vignale project and I am slowly resurrecting the car to its former glory.

‘I’ve had all the metalwork done (mostly in the sill area), and it has been painted in Grigio Newmarket – a subtle metallic grey of the Flavia period. Last month I got the engine running after having the fuel injector pump checked. The engine hadn’t run for ten years but it was as sweet as a nut. It just needs a bit of work on the steering and brakes and a complete interior refit and it will be ready for summer 2017.

‘Detail parts are hard to find but luckily the car was mostly complete when I bought it. I do all my own work on the mechanics, farming out metalwork and paint to local specialists. I am looking forward to driving it very much!’

“The car handles superbly and is very smooth and comfortable to drive on all road surfaces: it’s a true GT”

“With its aluminium flat-four engines, all-disc brakes and front-wheel drive, the Flavia was unique in the Sixties and enjoyable to drive”

This 1966 Coupé (designed by Pininfarina) is just one of 29 Flavia variants. Access makes the aluminium flat-four engines difficult to work on. The 1500, 1800 or 2000cc (this is an 1800) engines are oversquare aluminium flat-fours with a camshaft for each bank of overhead valves. Reliability is generally good. If lots of the interior b missing, beware – it’s very difficult to source replacement parts. Inevitably, the main worry with Flavias is rust. The car’s underlying structure Is so strong that rampant rust may not be immediately apparent. Check carefully – everywhere.