Let’s face it, cars are great. You lot clearly think so or you’d not be sitting there reading Fast Car, but the reasons why we all think cars are great, can be hugely varied. Some people want styling, others like performance, but most people want a bit of both. Even the most hardcore performance enthusiast subconsciously cares about styling – they still want to be seen in a nice looking motor. 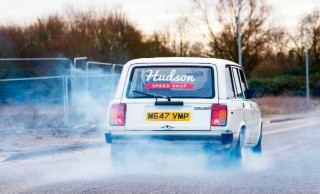 But what if you really, honestly, didn’t give a toss what your car looked like? What if you wanted a fast car that looks slow or un-cool? Well, that’s a ‘thing’ too. It’s called a sleeper, and they can be a hell of a lot of fun, as Tom Hudson, who built this insane, supercar-slaying Lada, can testify.

So why’s a sleeper fun? Why would you actually want a slow looking fast car? Well, while most people get kicks out of people thinking their car is cool and fast (even when it’s parked up), a sleeper is fun for exactly the opposite reason. It looks slow but goes like stink! To be honest, owning a sleeper offers some of the most fun you can have in a car.

You need a fairly thick skin to do it, though. If you can’t handle other drivers thinking your car is shit, then you’ll struggle. But get over this initial phase and you’ll open up a whole new world of fun. People’s reaction to the true performance of a sleeper is either complete amazement, or more often than not, complete devastation (if they’ve just attempted to race it) and both responses tend to be totally hilarious.

Any car that’s faster than it looks is fun. Fact. So imagine if you owned an old Russian car that’s been the butt of jokes for decades, but has over ten-times stock power and weighs about the same as a little Clio 172? Well yeah, that’s probably the most fun you can have on the road. 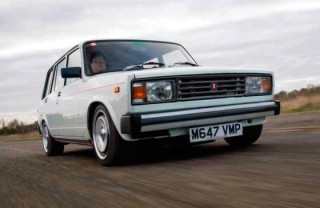 So what do we have here?

Well, it’s a 1996 Lada Riva estate, though thanks to the mega dated styling, that hasn’t changed since 1980, it looks far older. These things were made for cheap, basic motoring and they aren’t exactly good at, well, anything. At all.

Tom bought this car as a 16,000-mile standard example in pretty awesome condition (as Ladas go), but did he always plan to build a supercar-slaying Riva? In a word, no.

“It was a totally random purchase as I was desperate to take a retro car to the RetroKings show at Snetterton in 2015, and this was the only decent retro car I could find for sale locally!” Tom explains. “I actually took it on track at the show, totally standard, and it was painfully slow. Despite this, a Lada on track got an amazing reaction from the show goers and track marshals, so I promised everyone I’d return with the car for 2016, but with at least ten-times the power!” he laughs. 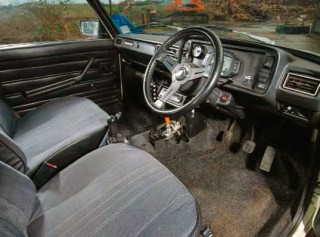 So how much power did the car actually have? Well, Tom, who happens to be MD of Hudson Speed Shop, strapped it to a dyno, and the car made a comedy 35bhp at the rear wheels – meaning to keep his promise, this lightweight Russian estate car needed at least 350 wheel horsepower. So Tom set to work…

His engine of choice was something quite unpopular in the UK, the Nissan CA18DET, most commonly found in S13 200SXs. The CA18 has a bit of a crappy reputation for reliability in the UK, but this isn’t because it’s weak, it’s mostly due to them being either well worn out, badly tuned, or usually both, which they don’t really deserve.

Thankfully Tom realised this. He feels they are hugely underrated, and knew tuners have made insane amounts of power from these engines in Japan and Australia, so when one came up for sale cheap, he snapped it up.

“Just like the car, the engine choice was because it came up for sale locally at the right price. Naturally it was totally worn out and broken, which got the typical response of ‘it’s a CA, what do you expect’ so I had to prove them wrong!” explains Tom. “And besides, they sound way cooler than a farty SR20DET that everyone loves,” he laughs. 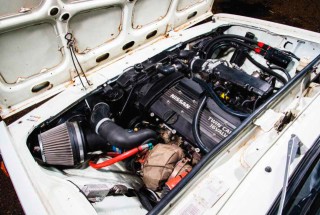 The engine was stripped and rebuilt with forged pistons, steel rods, HKS cams, and a whole lot more – topped off with a sizeable Holset RS341 turbo running a mammoth 2bar of boost; good for up to 600bhp on the right motor.

And the result? Well the car’s been road-mapped using the Link G4 Extreme ECU, so there are no rolling road figures, and Tom’s pretty modest, simply saying ‘400bhp+’, but in reality, looking at results others have achieved with the same turbo and comparable engines, plus the fact it’s maxed out the 720cc injectors – this engine is likely about 480bhp at the ¢ ywheel, enough to outaccelerate the vast majority of modern supercars – but in a Lada!

Best of all, despite people complaining about lag with their worn out, badly built CA18s running much smaller turbos, thanks to the trick turbo, great engine spec, and Tom’s mapping skills, he sees a massive 2bar of boost by just 4400rpm, and it pulls hard to the 8200rpm rev limit!

The car uses a 200SX gearbox and paddle clutch to get the power to the rear end, where it’s goes to both rear wheels via a competition plated LSD, imported all the way from Moscow. On a typical weight car the massive power of this engine would put serious strain on the transmission, but Tom’s had no problems at all thanks to the low weight of the Lada, combined with the fact that traction can be a bit of an issue… “On the original skinny 13in wheels it would spin the wheels through 4th gear even in the dry, but since I fitted these 15s and Toyo T1Rs it grips really well; though if you want to spin them, you still easily can!” he smiles. 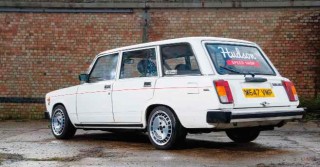 So the engine’s a monster, but what about the handling and stopping? With Gaz adjustable shocks and custom springs all round, it’s no Time Attack car, but it’s certainly able to be chucked around (as Tom is all too happy to prove), and it’s amazingly easy to control on the limit. The brakes though, well, in Tom’s own words “I like my cars to be borderline dangerous,” which would explain the fact this Lada has the best part of 500bhp, but tiny standard brakes! Tom’s kept the exterior and interior looking standard for the full sleeper look, though the drab, grey Russian interior hides quite a few trick bits, such as the Devil’s Own water/methanol injection kit and race fuel system in the boot. The standard clocks have been replaced with a race-spec digital dash and air/fuel ratio monitor. As this car is fully intended to be a hooligan, you might notice the hydraulic handbrake and brake bias valve in front of the gear lever; though the Nardi steering wheel is so retro that at first glance it’s easy to forget it’s not original.

So with the car complete there was only one thing left to do, use it! Tom kept his promise and hit the track at RetroKings 2016 with over ten-times the power he had last year, and to say it caused a stir is an understatement. “The Lada went past everything, Skylines, Time Attack cars, 600bhp Focuses, they were all in the rear-view mirror down the straights; though the car was far less impressive when cornering and braking,” he laughs. In fact, Tom says he pretty much laughed non-stop on track, until the last lap that is, as the standard brakes had totally given up the ghost by then. 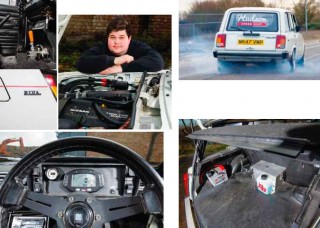 Given that people loved the car when it was bog standard, what’s the reaction now it’s absolutely insane? “Anyone who’s been in the car either is scared to death, or laughs themselves to death.

Nobody expects a Lada to be this fast and everyone loves it, so far. Well, aside from the local classic car club – I’m now banned for life due to some hooligan antics,” Tom explains.

“It’s accidentally became a great advert for Hudson’s Speed Shop, as we did the entire car in-house, including the mapping, and we’ve had a bunch of CA engine owners come to us for mapping and work since.”

So, although a car that looks faster than it is can be a real let down, a crazy sleeper will always blow people’s minds. And they don’t come much better than this wild Russian.

Ken Block ain’t got nothing on the Eastern Block! Not the first time meth has been found in a Russian’s boot… I’ll see your Audi interior and raise you, er, this… Hey Sergei, I go shop for more vodka, da?

Favourite part of the car – The Link ECU. I’m a massive Link fanboy

What’s next? – The next project is going to be an FSO Polonez, with massive power, of course!

A what?! – Google it! It’s an old Polish car that looks even slower than the Lada!

CHEERS TO Hudson Speed Shop www.hudsonspeedshop.co.uk, my girlfriend, Rio, the neighbour who reported me to the council numerous times for building cars at home (which just encouraged me to do burnouts outside his house), Kofte gang and everybody who encouraged me to build the daft thing, Link ECU, Devil’s Own, Turbo Dynamics & Fensport Performance for supplying awesome parts.