When Kenwood UK’s reworked new Scirocco demonstrator debuted at Ultimate Dubs earlier in the year it’s safe to say the car stood out. 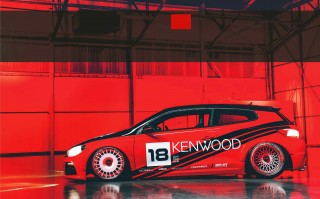 It was certainly one of our highlights from the event, and it clearly appealed to the masses, too, as they flocked around the car all weekend. Many will have been drawn in by the racy decals it was plastered with, but how many actually recognised the livery or remembered the car it was used on back in the day though? Probably only a handful! I was one of them…

Iconic racecar livery’s have certainly made a comeback recently on some pretty high profile show cars. But while the popular liveries are great (who doesn’t love a Jäegermeister recreation or a JPS replica?) it’s always the slightly more obscure type that floats our boat, like Carl Taylor’s ‘Tic Tac’ BMW E36, Dan Guirey’s ‘Wrigley’s’ Mk1 Golf and Matt Clifford’s ‘Rothmans’ Porsche 997 to name but a few. Some, especially those in sportscar circles, may even call the latter Porsche colour scheme used on the all conquering Works Porsche 956s quite common (I guess it also adorned the Williams Formula One car during the 90s to be fair), but the livery sporting Kenwood’s Scirocco seen here was anything but mainstream.

You may remember we originally featured Kenwood’s Scirocco demo a few years back, when the car was virtually standard externally apart from a satin black wrap and some 19” cast wheels. Well, this time round Kenwood decided to mix things up totally and the first thing you notice has got to be the striking bespoke body wrap. The livery was originally used on Kremer’s Porsche 962ck6 that raced in the 1989 Le Mans. That very car may have departed the race in the latter stages due to a fi re, but it left a lasting impression on those that saw it. I was fortunate enough to be at that very race, so the moment I clapped eyes on Kenwood’s killer ‘Rocco I knew exactly where the inspiration had come from. Despite witnessing the original Porsche almost three decades ago, I vividly remember falling in love with the livery and how well it worked wrapped around the long tail Porsche 962, with its turbo fans up front and silly-wide centre-locks out back. 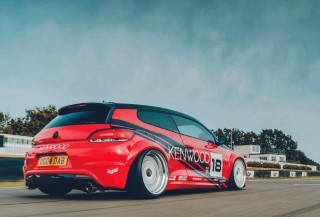 The fact Kenwood picked up on that design and somebody in the marketing team figured it would be a great (and extremely clever) way to catch people’s attention almost 30 years on, was frankly genius.

That’s enough reminiscing, for now at least. There’s far more to this car than a striking wrap and a naughty set of wheels, and that’s before we even get to the most important part (the part Kenwood really would like us to talk about today), the car’s install. You see the guys at Kenwood UK know only too well that these days most people modifying their cars aren’t simply looking for an audio install, they want the complete package, and so they decided to go the full hog with their Scirocco this time around to really get people inspired. “Cars are all about relationships, so we wanted to work with people and brands that have supported us over the years and those who have a shared vision”, explained Adam Handley, Sales and Marking boss at JVCKENWOOD UK. This meant calling on a bunch of trusted companies from all around the globe that it knew were equally as passionate about their specialist product, and the first port of call just so happened to be with Hideo Hirooka over at Voomeran in Japan.

While Voomeran’s wide-arch kit for the new Scirocco had been around a few years, this was the first we’d seen of its kind in the UK. With a six week wait until the kit dropped on our shores though, the guys didn’t plan on waiting around so called in Garage Midnight and Riiva Design to sort out the wheel fitment and interior overhaul. With the car delivered to Riiva’s workshop, it was time to get their collective thinking caps on and quicker than you can say stop willy waving and make a decision the chaps came up with a masterplan, to keep things simple and dare we say it, almost classy on the inside as to not distract from the audio install.

The idea of using Mk5 Golf GTI Interlagos tartan fabric for the inserts of the seats was certainly inspired and a throwback to the early GTIs of the late 70s. When it came to sourcing suitable front chairs the team only had one company in mind, Cobra! A pair of Nogaro buckets were quickly drafted in, but before these were retrimmed, the harness holes were erased to give a cleaner, custom look. A classic motorsport-style Momo 330mm steering wheel was then fitted, and (with the help of MMR Performance) the guys decided to delete the rear seat and fabricate a custom metal firewall, which houses a seamless air tank painted satin black. The rear speaker cards were then painted a bright red to highlight the pair of 12” subs mounted inside them. Up front the door card inserts were also painted red, with the Kenwood components mounted in custom black pods below them. Finally inside the central arm rest and handbrake cover were also trimmed in bright red material to match the door cards.

While the team at Riiva were ordering in parts left, right and centre they also put out shouts to Air Lift Performance and Rotiform over in the States for the suitable hardware needed to get this car sitting on point and turning heads for all the right reasons. Wheels are probably the most important part of any project car, but where Kenwood’s Scirocco was concerned that couldn’t be any more true. As the guys were theming the car on the Kenwood-sponsored Le Mans racer, it made sense to roll on similar looking hoops, too. Now while slapping silly-wide BBS centre locks on would have been a little bit silly, the team spoke to Jason at Rotiform and decided on what has got to be one of the best wheel options we’ve seen (especially when you factor in the look the were hoping to achieve).

Now while staggered fitments are nothing new, fitting different style wheels front and back is certainly pretty unique. As the Le Mans Porsche ran with flat, turbo fans up front (to aid brake cooling), Riiva and Garage Midnight spec’d up a set of 10×19” Rotiform VCEs to give a similar look for the Scirocco, while out back (to mimic the 962’s wide, cross-spoke BBS wheels) it settled on a pair of 10×19” Rotiform LHRs. The centres of all four wheels were then painted in the brightest gloss white the guys could find. While the grippy 235/35 Toyo Proxes dimensions were pretty sensible, the -3 offset of the wheels meant the guys planned on fully exploiting the extra girth that would be gained by the rivet-on Voomeran arches.

As the car was gaining some serious width it was decided that deeper, more purposeful Scirocco R bumpers would also be called upon to bring the facelift together and boy did they do just that. Once the arches arrived and the original fenders we cut to allow them to be fitted, the car looked incredible. Then, finally, Totally Dynamic could do their thang with the bespoke Kenwood wrap… what a transformation! Finally a Regal Stage 1 remap was added along with a Milltek cat back system to give the car a touch more grunt.

For all the audio nerds, in terms of hardware Kenwood went with one of its DNX9180DABS head-unit, plus one of its DRV-N510 dash cams, plus CMOS-230 front and rear cameras. A single X301-4 four-channel amp then powers the front door cards, while no less than three X501-1 amps power the twin 12” and single 10” subs. Finally, a single two-channel KAC- 5206 amp runs the KFC-X134 boot lid speakers and the pair of XR-1800P comment speakers in the front doors.

It’s safe to say we loved the original Kenwood Scirocco, but this latest incarnation is on a whole new level. If you haven’t seen the car yet then be sure to keep an eye out at one of the remaining shows this year. These guys never stand still, so we’re sure there will have been a few changes since our photos were taken. I wonder if you’ll be able to spot them? 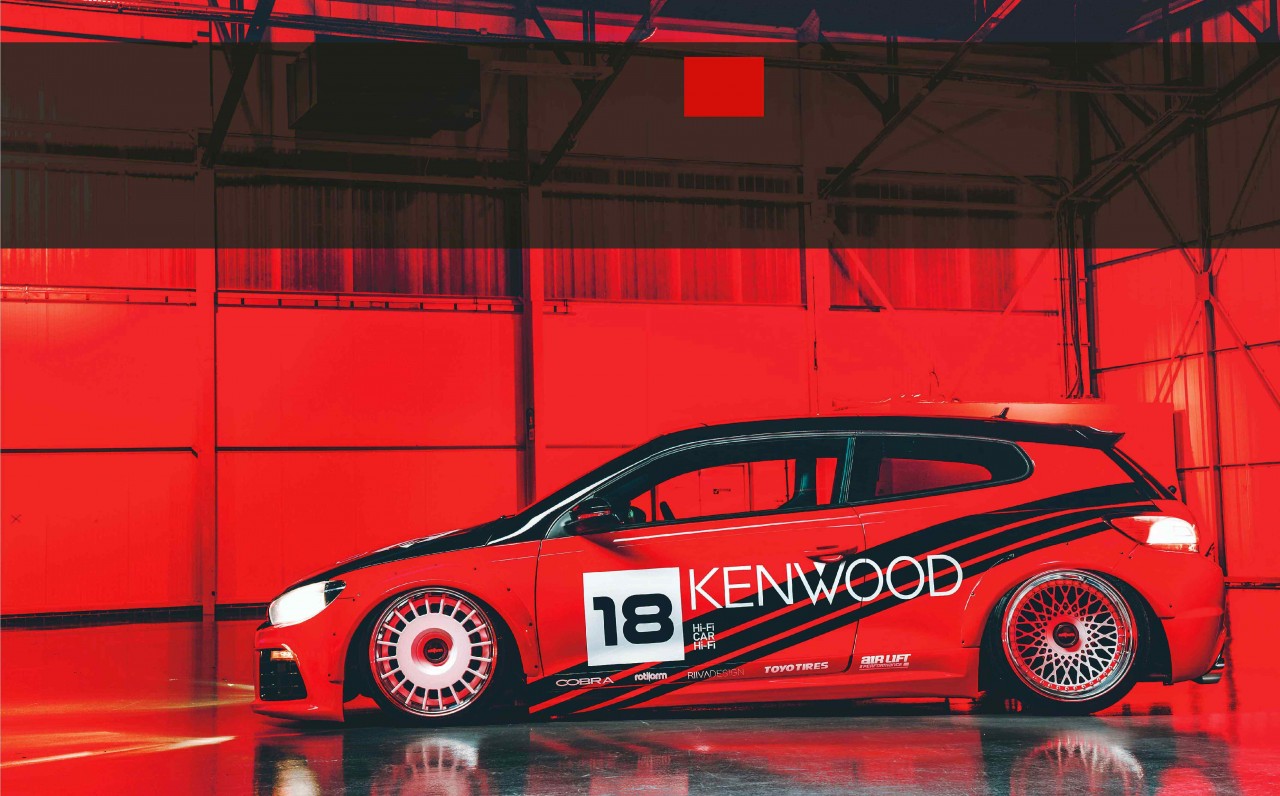 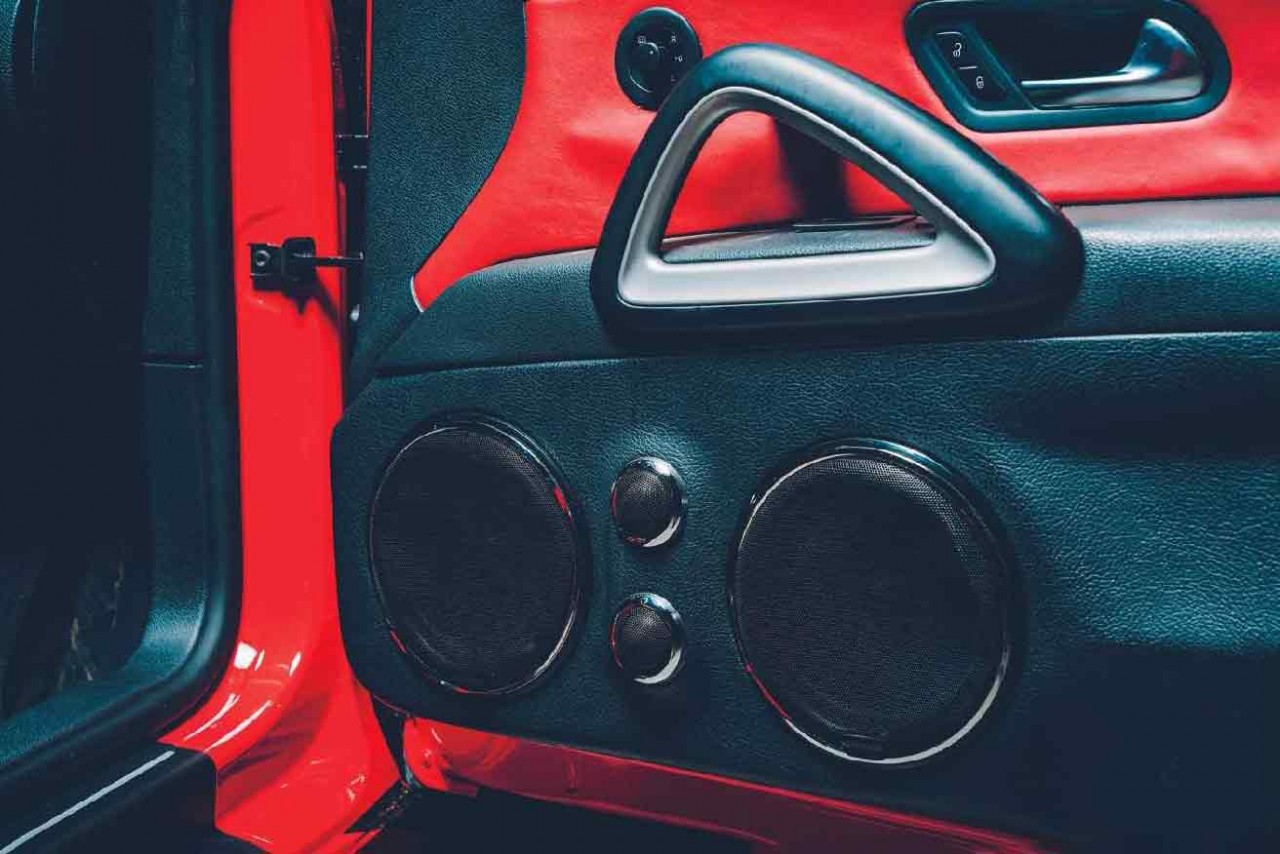 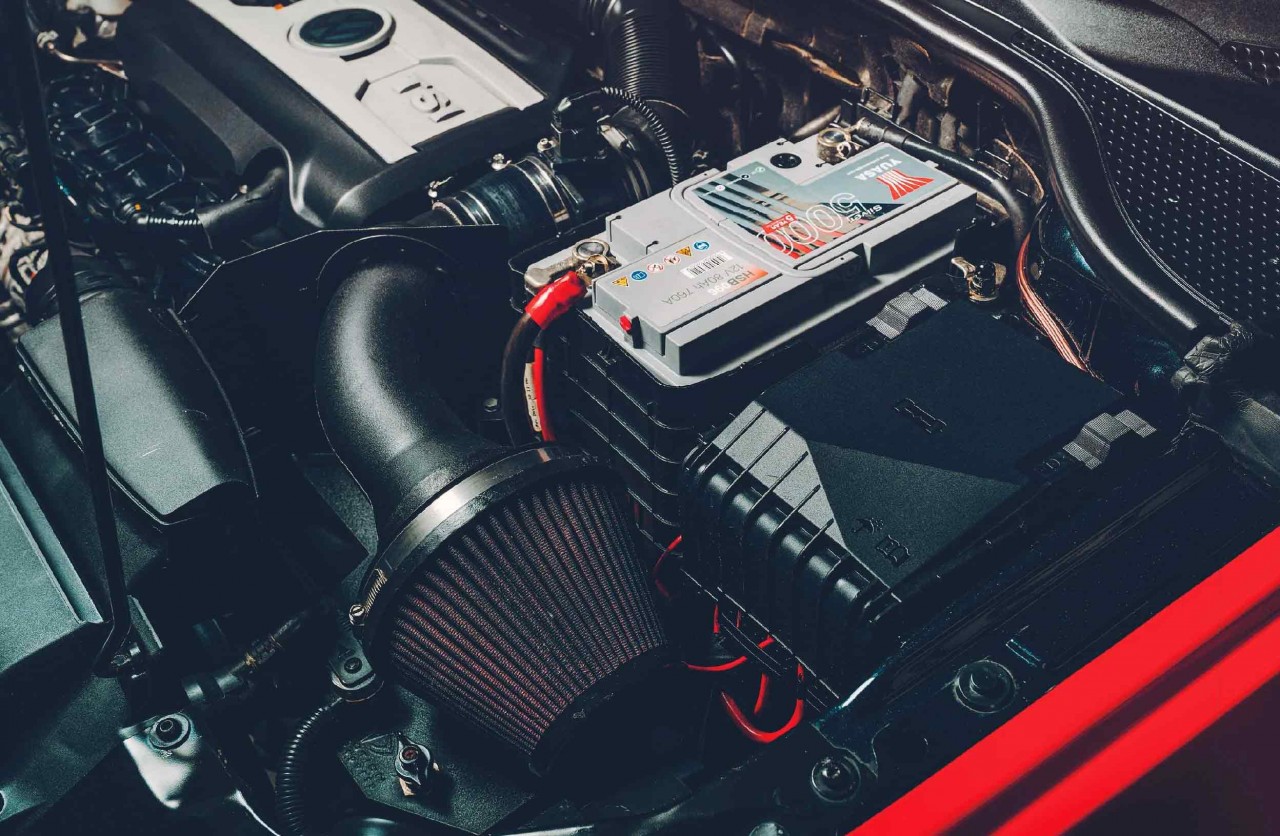 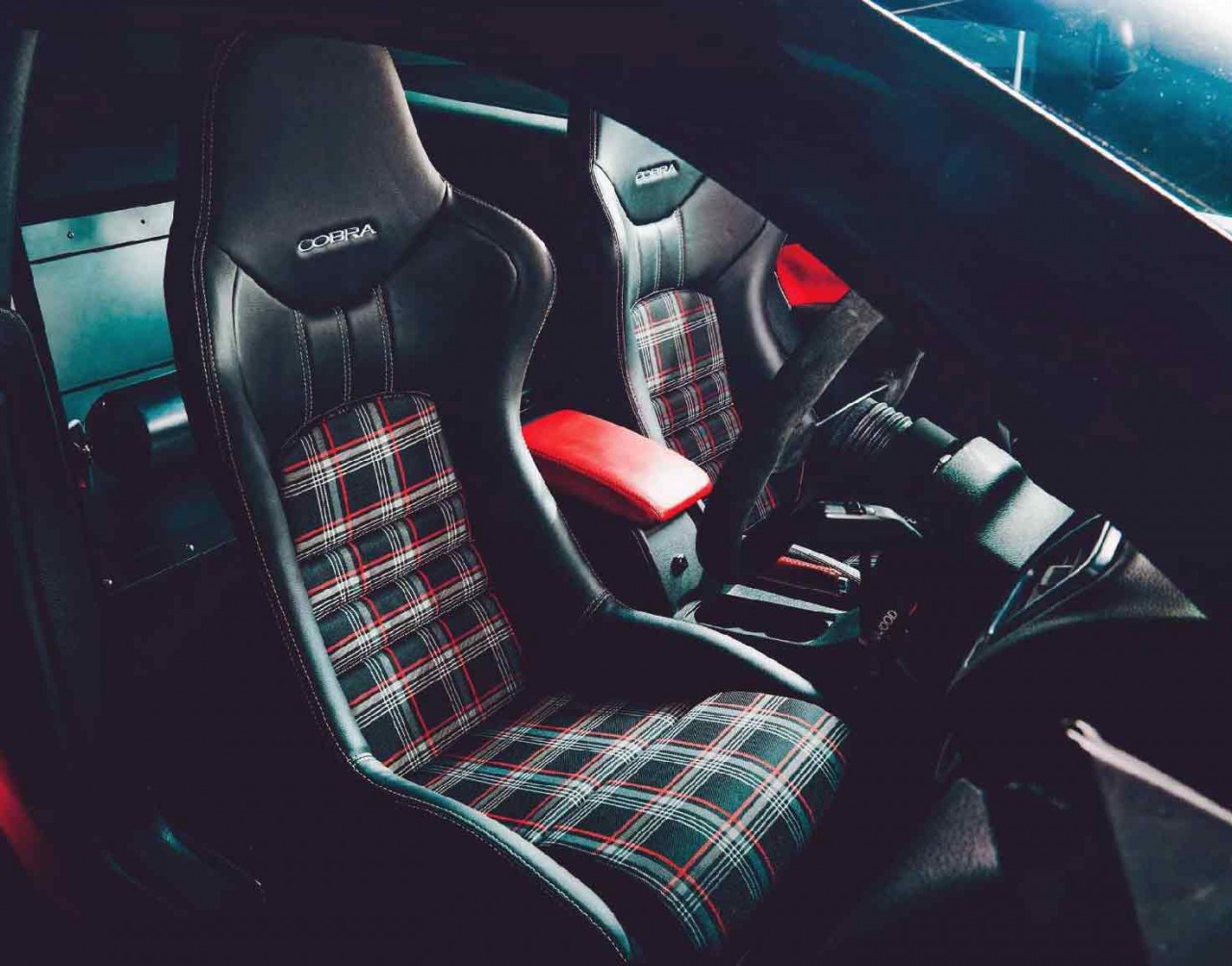 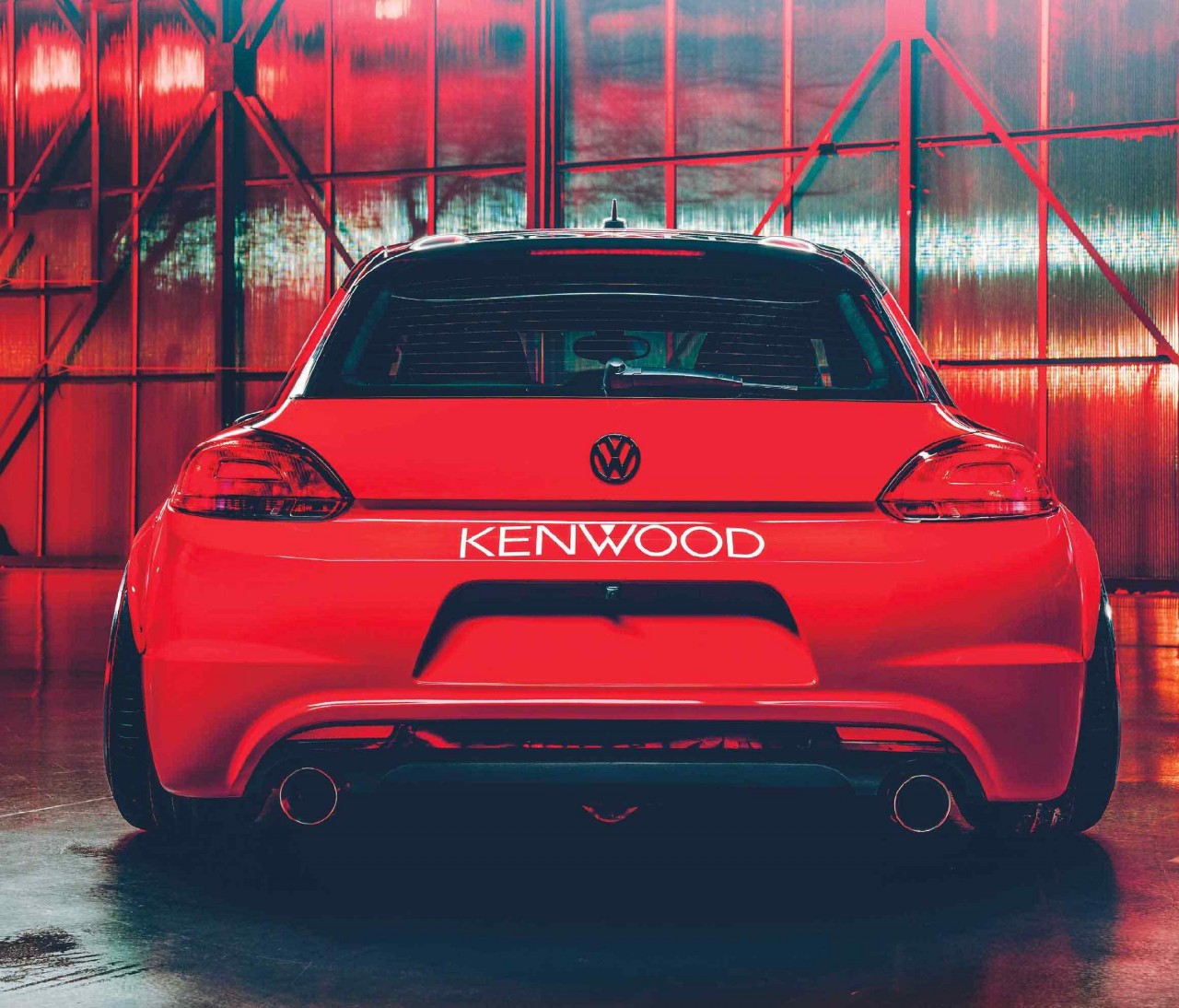 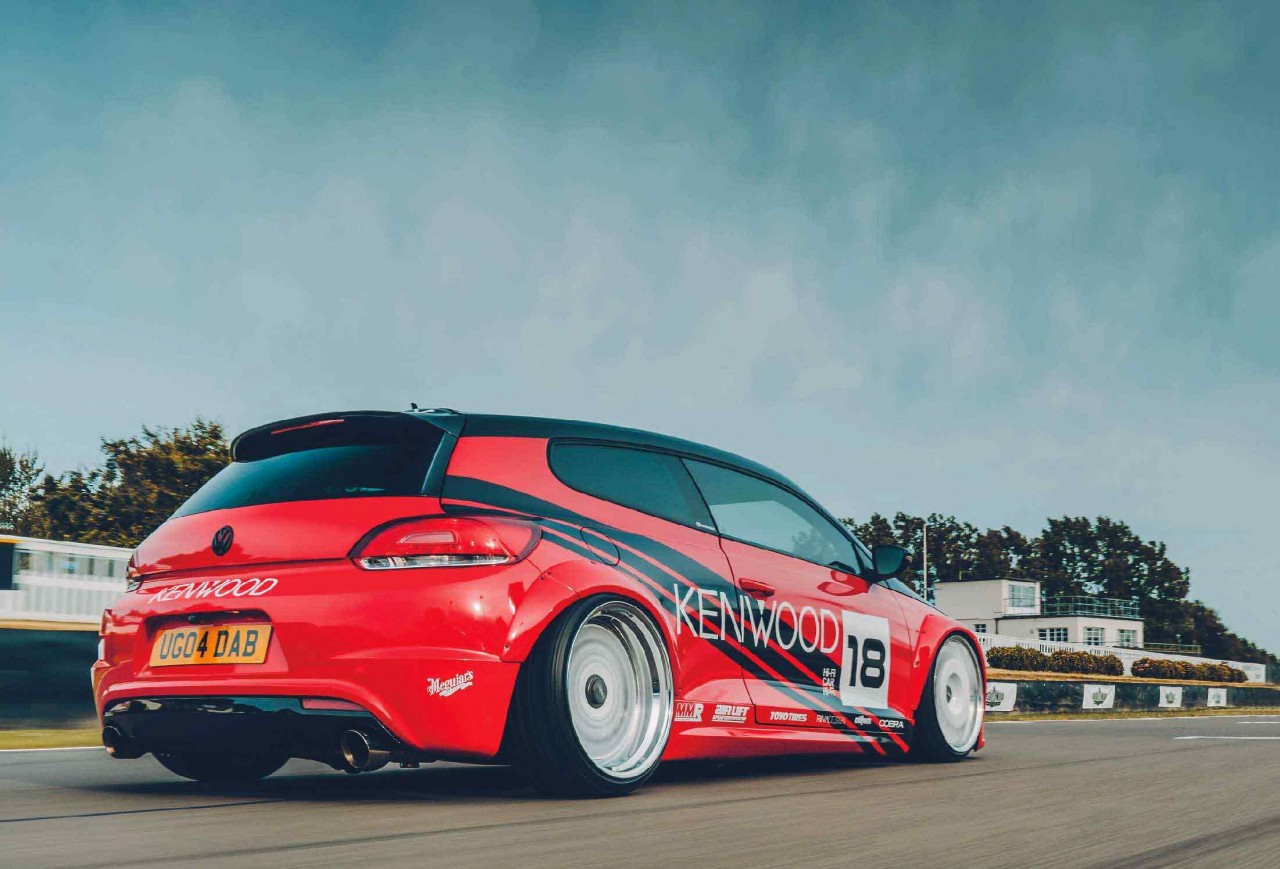 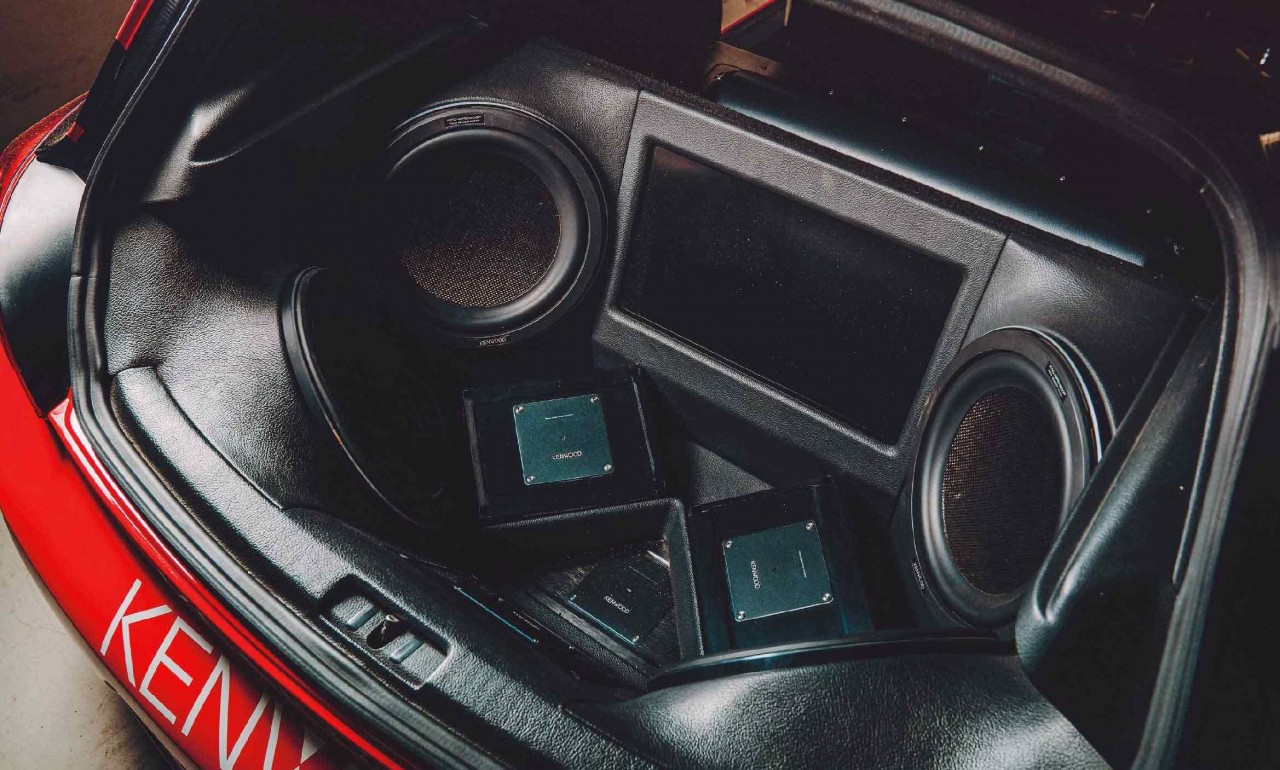 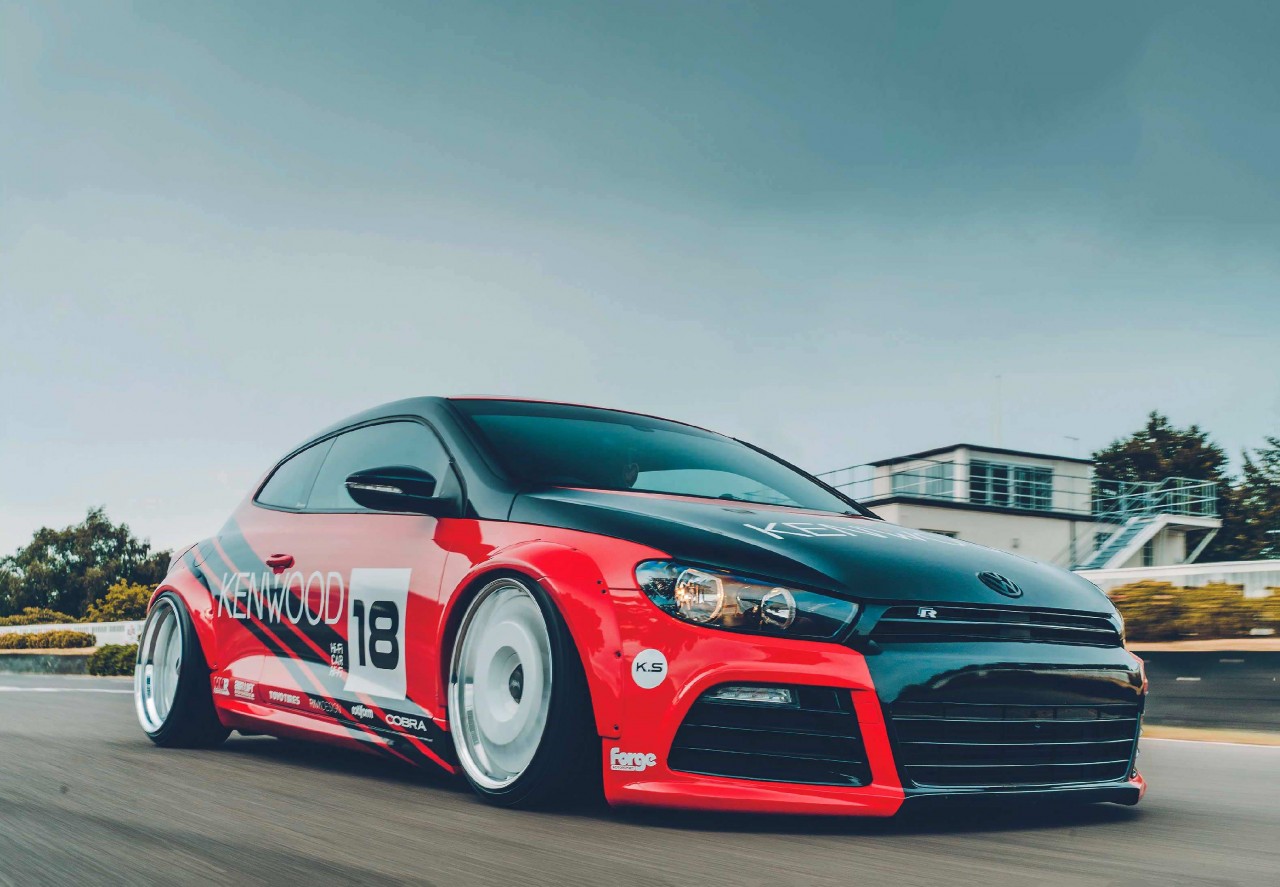 NOW while staggered fitments are nothing new, fitting different style wheels front and back is certainly pretty unique.

The fact somebody figured it would be a great (and extremely clever) way to catch people’s attention almost 30 years on was frankly genius.