The Jowett Jupiter was a clever, innovative small sporting car that proved effective and reliable in competition. It sold in small numbers simply because its maker lacked the resources to build it cheaply enough.

Forced to produce cars for export or die after WW2, Britain’s car manufacturers battled with outdated equipment and desperate material shortages. Gerald Palmer’s brilliant Javelin saloon – aerodynamic, monocoque, low forward-mounted flat-four engine – was a revelation, but overseas sales were slow. The potential for a sports car derivative was seen both within and outside Jowett, however. Influence from Lawrence Pomeroy of The Motor and ERA resulted in a joint project to bring Austrian Prof Eberan von Eberhorst, designer of the phenomenal pre-war Auto Union Type D, over from Italy to join ERA and design a sports car for Jowett.

Von Eberhorst was horrified by the primitive nature of the ERA works but, undeterred, sketched a tubular chassis on the floor with chalk. Novel and stiff, it employed torsion-bar suspension all round with trailing-arm rear-axle location, plus anti-roll bars front and rear (deleted for production). Displayed at the Motor Show in ’1949, before a body was ready, it attracted attention and resulted in quite a few Jupiter rolling chassis being sold to coachbuilders large and small. Jowett chief designer Reg Korner drew up a rakish two/three-seater soft-top body, which was specified with wind-up windows and a quality stowaway hood because it was clear from the start that Jowett could not compete on price with the likes of the MG TD. Steel was used for the inner body frame, but all the outer panels were pressed in aluminium (which was not subject to the strict government tariffs placed on steel supplies), then individually panel-beaten to fit.

It was an expensive car to build and, when the Healey 100 was launched in ’1952 for just £39 more, its days were numbered. The substantially cheaper Triumph TR2 nailed its coffin shut in ’1953. Jowett bravely tried to introduce the smaller, lighter, more sporting R4 (which may well have been the first production car fitted with an electric cooling fan and thermostatic control), but had to call it a day. The factory was sold to International Harvester and Jowett faded into history. Jupiters now have outstanding club support and make an excellent classic buy, offering comfort and practicality that belies their age.

Jowett had early production issues with head gaskets and crankshafts on the wet-liner flat-four engine, although all of these problems have long since been resolved and there are no inherent weaknesses with the unit. Oil cooler was standard but its location was moved from in front of radiator (at back of motor) in 1952.

Original Smiths gauges are unobtainable new and costly to recondition, so look for a full set in good order. Alternative or repro instruments never look quite right.

Standard Zenith carburettors are often replaced by Webers or, as here, Dell’Ortos that are available new and release a little more power than rebuilt Zeniths can.

Gearchange should be precise (if not, selectors need adjusting). Test for poor synchro (on 2/3/4) and jumping out of gear, indicating the need for an overhaul.

Front suspension needs lubrication every 500 miles (11 grease points), or kingpins will wear and start to seize (stiff steering). A rebuild is expensive.

Wide leather seat and column shift meant three could be carried at a pinch, or two in comfort. On Mk1s it hinged forward for access to the luggage space.

Cracks in engine bearer tubes, if not reinforced

Curvaceous Jupiter rides and handles much better than you would expect a ’50s sports car to, with its chassis designed by Eberan von Eberhorst.

A good Jupiter should feel lively and relatively modern to drive, with a throaty, almost Subarulike exhaust note from the water-cooled flat-four. An oil cooler is standard and the large radiator is set behind the engine. Check for signs of overheating and leaks – radiators do silt up with age and neglect will ultimately lead to headgasket issues. Look for emulsion in the oil and radiator. Most (but not all) engines leak a little oil; check it’s not excessive and that the unit is not blowing oil smoke everywhere, indicating worn bores and rings. Listen for knocking under acceleration, which means crankshaft wear. 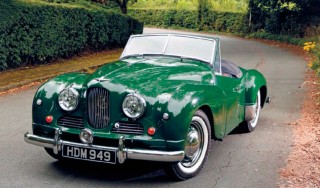 With a little practice, the column gearchange is easy to use and, while shifts shouldn’t be rushed, the Jupiter can be rowed along effectively because its ratios are well chosen. Listen for gearbox bearing wear (dip the clutch at tickover) and test for worn synchros and jumping out of gear. Vibration from the drivetrain is likely to be a worn Layrub coupling – the forward-mounted engine means an unusually long, split propshaft. The Jupiter should handle well, with light, precise steering and a comfortable ride thanks to its sophisticated long-travel suspension, which does, like all ’50s cars, need frequent lubrication.

Though the electrics are straightforward, it’s wise to inspect the condition of the wiring loom, because it may be dangerously hard and/or frayed in places if it’s the original. New looms are available but time-consuming to fit. Some cars, such as the one photographed, have had their original trafficators removed and flashing indicators fitted; it’s worthwhile for safety, if not originality.

“Jupiters have always been part of the family,” says Jackson, laughing. “My dad had them first. My brother bought this one as a non-runner for £35 in 1965. Dad towed it a couple of miles then opened the bonnet, tweaked the distributor and it fired up! I bought it from my brother and have had it 50 years, it was my everyday car for many years. It’s been uprated with Dell’Orto carbs and, when the engine was rebuilt, with Fiesta pistons. The skirts have to be modified slightly but they give higher compression and a bit more power. The Jowett Car Club is fantastic for parts; if I order on a Monday evening, they’re here on the Wednesday. It gets batches made and I have a good stock of used spares. It’s very friendly, too – we enjoy several trips with them every year.”

For Attractive and eminently usable

Non-original blue suits Jupiter but paint has a few flaws. All the gauges function, plus the hide is in nice condition. Oil-tight flat-four has covered 15,000 miles since rebuild.

The owner of our featured car, Jackson picked up this Jupiter two years ago as a retirement project. The previous enthusiast owner had looked after it for more than 20 years and enjoyed occasional continental tours, but it was hard to start and the suspension was incorrectly set up. The car now fires readily and handles well.

Still on the original Zenith carbs, the flat-four pulls strongly, the gearchange is precise and the light steering a delight. The tyres are relatively new, plus the engine and transmission oil-tight. The body was painted in ’1991 in a non-original metallic blue. The then owner added blue piping to the cream leather seats (which are in excellent order), and painted the crank pulley, air filters and horns to match. Otherwise the engine bay is very original. The top hose might benefit from replacement soon and there is a rattle from a loose exhaust baffle. The dashboard is lovely, with all of the correct instruments working.

Underneath, it’s all properly painted and in very good condition; angle-iron stiffeners have been welded under the front of the chassis tubes, a mod recommended by Jupiter pundits. On top, the car looks stunning from a distance but closer inspection reveals several areas of surface corrosion under the paint, especially adjacent to the wing piping front and rear. You could live with the car and enjoy it as-is for years, but it would need a bare-metal respray to make it really nice.

1952 Apr Engine side valances attached to bonnet instead of chassis; oil cooler moves from ahead of radiator to front of engine

The 2.1-litre Standardengined Plus Four was Morgan’s only model from ’1951 in 2str, 4str or DHC forms, the last closest in concept to Jupiter.

Not that quick given its 1497cc overhead-cam engine, the SM was (and still is) quite a bargain, especially with pricecutting during production. Most went for export.

Considering their relative prices when new and the quality of construction, Jupiters are undervalued against other ’50s sports cars. Whether you’re after a project or a concours example, it’s important to check carefully for originality and missing parts. With decent weather protection and good performance, they make ideal touring cars as well as competitive rally mounts.

• Ahead of its time

• Good handling and usable performance; keeps up with modern traffic

• Many have been modified, not all well

• Costly to restore due to complex construction