John Haynes – my life in car 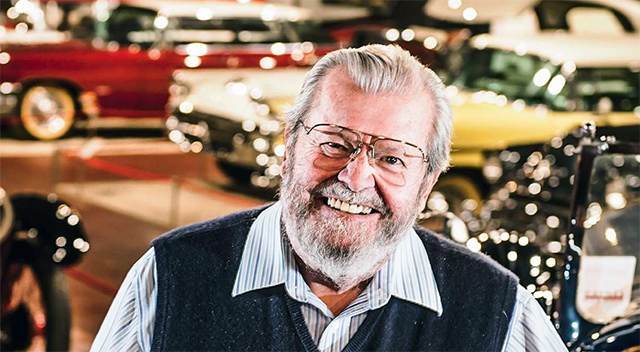 John Haynes – my life in car. Understand, this is terribly, terribly difficult because Plike them all. John Haynes is the father of the modern motoring manual and patron saint of the DIY mechanic – here he talks about the cars that mean the most to him. Words: SIMON CHARLESWORTH. Photography: LAURENS PARSONS.

Genial, affable and accommodating – as we chat, John Haynes instantly puts you at ease not merely with his gentle manner, but because he is clearly a bona fide enthusiast. His passion for cars, at just 16 years old, sired an Austin Seven special that inadvertently laid the foundations for one of the most instantly recognisable publishing houses in motoring.

Our venue, the Haynes International Motor Museum, almost proves to be both a blessing and curse, for its vast array of exhibits provides oodles of opportunity for John’s abundant motor infatuation to be diverted into tangents and asides.

Founded as a means of uniting his collection under one roof, the idea evolved into a museum. Then my accountant said why not make it a charitable trust? I would still have use of the cars, and when I pass on they’ll still be there for other people to enjoy,’ says John.

‘Until I was about 12, I had lived in Ceylon. I came back to have a proper boarding- school education at Sutton Valence down in Kent – which is where the Austin Seven special was built in 1954,’ says John.

Talking over an Austin Seven special in the museum, John compares it with the one he built. ‘My car was very simple, on an A-frame chassis with lowered suspension. It was great fun. It wasn’t capable of much performance, but it felt capable of more than it did because it was light and it was small. It probably did 65mph flat-out.

‘I was no good at rugby, football, cricket or anything else but I loved cars. I saw a wonderful Austin Seven special and I thought maybe I can build one of those? The headmaster was a very understanding fellow and he said, “Right ho, Haynes. I know you’re useless at sports, so go and build your car”.’

Because of its lack of windscreen and weather equipment, John advertised the Special in Motor Sport after getting it home to Deal in Kent on trade plates. ‘I had more than 100 replies. I was absolutely amazed at the response… I thought that if I did a booklet about this, run it off on a Gestetner duplicating machine and charge five bob, then I’ll make a bob or two. So I ran off 250 copies and they’d gone in about 10 days – and that was the start of it all.’

‘I was a sports car enthusiast,’ explains John. ‘In 1959 I was doing my national service in the RAF and I was posted out to RAF Bruggen in Germany, and being an enthusiast I bought myself a brand-new MGA – when I was 21.1 enjoyed that car enormously and when I married Annette we went on honeymoon to Spain in it. ‘Having enjoyed a sports car like that, I heard rave-review road-tests about the AC Cobra. So when one came up for sale, I went down, tried it, loved it, bought it.’ This was in the mid-Seventies, when John bought it for £6000. ‘It was a hell of a lot of money for it then, I can tell you!’

John Haynes: the man to thank for getting you through your first oil change. John Haynes with Murray Walker (centre), Richard Noble and John’s beloved AC Cobra. Being useless at sport can pay off – John’s mechanical expertise has been far more useful. John with the Duesenberg just after getting it to its new home at the Haynes Motor Museum. The couple’s Morris Oxford – pushed up many a hill by John’s wife. John and Anette’s Mustang provided the means to explore Route 66 while they were in the USA. John’s favourite marque is Jaguar – and he loves his E-type V12, preferring it to the six-cylinder car that graced the cover of the Haynes manual.

Worth it, though? ‘It’s the best open sports car I’ve ever had or ever driven – it’s absolutely fantastic. It’s light, with a 289ci V8 engine, and it handles and steers absolutely beautifully – it’s terrific. Friends and family (son JJ accompanied John home with his new acquisition) thought it was fabulous, especially when I took them for a run in it, because the acceleration was breathtaking. It’s a beautiful car.’

I bet this is a challenge down the local Somerset lanes? ‘Oh yes,’ says John before pointing out that the name of the museum’s most valuable exhibit is not pronounced Der-am but Der-ham.

‘Only eight were made and this is the only one outside of the USA. It’s an incredible car, with a straight-eight engine – for a vintage car it goes absolutely marvellously. It’s got 6816cc and 265hp – which you can imagine in 1931 was a hell of a lot. I think about 110mph is its top speed. It’s got light steering, a light gearchange and it’s great fun to drive. It’s a most beautiful motor car and the best vintage car in the collection.’

Bought in the early 2000s, the Duesie’s quality reputation is what attracted John to it. This Model J had been previously owned by Chris Chandler of the Los Angeles Times and Mrs Paul Whitney – as in the aeronautical company Pratt & Whitney.

‘When I found it for sale it was in New Jersey. So the curator, Mike Penn, and I talked about how we were going to get it back and he went out there with the money for it. We decided it had to come back via airfreight. British Airways was useless and Lufthansa couldn’t help, but good old Air France said yes certainly, mais oui, yes.”

‘It went on a freighter after Mike had picked it up, and he travelled with it. It was the most incredible flight he ever had. The other 15-20 passengers were all returning

We’re joined by John’s wife Annette, who has played a key role in the Haynes story.

‘The 1930 Morris Oxford was my first vintage car since the Austin Seven. I wanted a vintage car and it seemed ideal. It was a decent saloon with not much power – flat-out, I think it’s about 55mph – it handled quite differently from anything else I had. It’s a proper vintage car and I enjoyed it for just what it was – not to be seriously driven every day,’ smiles John.

After a spot of calculation from Annette, it’s thought the couple have had it since 1969/1970. She predicts the next question, however, by confessing, ‘I’m hopeless at prices, though; I never ask the price of anything. It gets me into trouble sometimes. I can’t imagine it was much because it was the first one John could afford to buy. Probably about £300.’

Featuring a 1938cc side-valve six and three speeds, how is it to drive? ‘It was an eye-opener. Coming out of Bath, there’s a steep hill and it wouldn’t climb it, so I had to put it in reverse to get it to go up there,’ says John with a grin. Annette adds, ‘It’s a so-and-so to drive and I’ve pushed it up many a hill. I’ve had to push quite a few of the cars up hills…’

‘I bought the Mustang in America and ran it when we were living out there. Now, that is where most of our business comes from – 70 per cent from North America. When we first went out there, I soon realised that American book publishers Clymer and Chilton – both of which we now own – covered American cars in great detail. But a lot of them, especially on the west coast in California, were ignoring all the imports from Japan,’ says John.

‘So all the small Japanese cars were not getting any coverage. We thought, ‘‘Right, we already have manuals for these back in the UK”, so we put out manuals the other publishers hadn’t done. That’s how we got started in California in 1976.’

‘This Mustang was 10 years old when you bought it in 1976,’ says Annette. ‘These are the original “pony” seats, which were available for just one year.’

‘We went up to San Francisco in it – up Highway 101 which becomes Highway 1.

It was great fun and it was my everyday car. We did Route 66 from one side of America to the other; there’s not that much of it left, which is a great shame.

‘What did I buy in America and I nearly went through the showroom in it?’ asks John. ‘Model T,’ replies Annette quickly.

‘Oh yes! It was the controls…’

Annette laughs. “‘How do I stop it?” I remember sitting in the back, increasingly concerned, thinking – do I jump out?’

Trying to nail down one specific Jaguar is clearly hard work for John. He shows me his not-so-shortlist and it contains no fewer than four Browns Lane beauties. Is it his favourite marque? ‘Oh yes… It’s their comfort, handling and performance that make them tremendous cars.’

‘Of course, the exhaust from the trucks blew straight into your face,’ John adds. ‘So we brought it back to the UK.’

Annette laughs, ‘I kept being asked by truckers, “what did do you do with your driver?” because it was right-hand drive…’ And you both took your US driving test in this? ‘It only took an hour and it wasn’t complicated. The examiner said she hadn’t seen one of these before…’ says Annette.

Adds John, ‘At least she had a sense of humour – I’ve passed your wife, so I suppose I’d better pass you!’

So out of the two E-types, which is the favourite? ‘I prefer this to the fixed-head – it’s more fun – quicker and I like open cars,’ says John with a smile. And as for his favourite? ‘Understand, this is terribly, terribly difficult because I like them all.’