IN TO THE BLUE

Jean Moss has had her 1959 Aston Martin DB MkIII Drophead Coupe since 1975. That’s 44 years. It goes better now than it did when new, and a lot better than it did when she first saw it, neglected and immobile with a suspected head gasket failure, in Wiltshire. 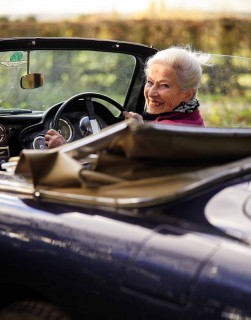 ‘A customer had found it,’ Jean relates, ‘and my late husband Michael and he went to look at it. The customer then said he couldn’t justify the cost of all the work it needed, so that was that. Not long afterwards, the seller called Michael. “The head gasket has gone,” he said. “Would you buy it?” How much? “£1100?” No. “£850, then?” Still no.

‘Michael called him back a few weeks later. Was the deal still on the table? It was, and we had a cylinder head here at Four Ashes from my father-in-law’s car. So we loaded it in a Cortina estate with the kids and dogs and set off to Wiltshire. “Where’s your trailer?” asked the seller when we arrived. “We’re not going to trailer it – we’re going to stick another head on it and drive it home.” And we did.’

Jean, who has owned and run Four Ashes Garage since 2003 with Chris Adams, now her second husband, still calls herself Mrs Jean Moss. ‘That’s what everyone knows me as,’ she says. She has been involved with Four Ashes since the 1960s, marrying Michael Moss, son of founder Jack Moss, in 1967 (you can read our ‘Specialist’ feature on Four Ashes starting on). Jean and Michael got themselves a DB MkIII soon after they married, registered 6 KPB and once owned by Roy Salvadori, which Jean still has. ‘So I’ve got two of them! The other one needs a rebuild, though.’

There was also a DB4 convertible between the two MkIIIs, but Jean couldn’t get on with it. ‘It was my size-four shoes,’ she says, ‘and the wall in the footwell by my heels. It was not comfortable. Then we had a daughter, worked out how we could keep both cars, then sold the DB4 and got this car.’

This car, WLY 98, is resplendent in BMW Orient Blue, a very fine metallic. It wasn’t always so. ‘”You’ll never guess what colour it is,” Michael had said to me after he’d seen it for the first time. “It’s purple.”‘ 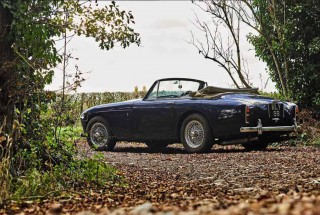 The respray was prompted by an unfortunate event. ‘My father-in-law had a bit of an accident in it,’ says Jean. ‘He’d been doing an event at the Millbrook test track, 80 minutes on the banked circuit at 80mph to celebrate being 80 years old. He did it with Tom May, who had taken the photograph of me with WLY for the cover of the AMOC’s News Sheet in 1999. Father-in-law had sold his Aston, so he borrowed this one for the event. I polished it up and all was fine. Then, at work the following morning, I got a phone call: “Sorry, I’ve hit an Escort.”

‘We couldn’t match the Roman Purple, so I stripped it off and we repainted it in this blue. The boys did some other bits and pieces while repairing the damage, such as the wheelarch edges which corrode.’

Well, it looks lovely now. The DB MkIII was the first Aston Martin with the definitive modern shape to its radiator grille, updating the look dramatically. It’s a smooth, understated, uncluttered look, the bridge between the sparing functionality of a DB2 and the Touring- styled elegance of the DB4, just coming on stream at Newport Pagnell even as this open MkIII emerged from Feltham. Its bodywork, of course, had already been at Newport Pagnell: it was made there, at the Tickford works, as badges remind us. 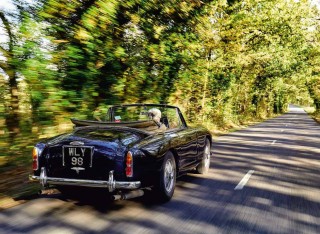 It sits on Pirelli Cinturatos, which were exotic and very racy in the 1950s, still excellent today as re-made in a modern rubber compound. WLY is smart and shiny, but obviously used and enjoyed. There’s ample patina here; the door handles are a bit pitted, the interior a touch rumpled. Especially the driver’s seat, on which is a very non-standard cushion. ‘I have to have it these days,’ confesses Jean, ‘because the seat is a bit sat-at.’

She positions herself on the cushion, I take up station in the passenger seat and we’re off on a drive, sun shining, wind blowing through the cabin. The engine sounds great, deep and free- breathing, helped by Chris’s uprating of it including a trio of SUs in place of the usual pair. That engine rebuild activity coincided with incorporating a gearbox with overdrive. ‘That’s the big thing we’ve done,’ Jean says. ‘It was a £25 option in 1958 but there were no motorways so few of the cars had it. It means the gear lever ends up further forward, which is why there’s an extra hole in the tunnel.’

We’re burbling along at a brisk lick, Jean stroking the Aston Martin through the gears and bends with the smooth confidence that comes from sharing many thousands of miles together. Some motorsport, too: ‘I did sprints and hillclimbs in the 1980s, mostly in MYT 265, the DB2 race car we had, but also one or two events in this. I won the AMOC ladies’ hillclimb championship.’ 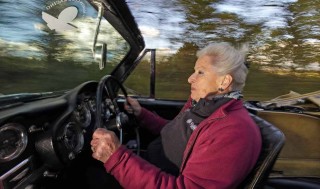 We pull in for a moment, not least so that lensman Howell can activate some more pixels. I ask about WLY’s history, but Jean hasn’t been able to piece much of it together pre-1975. As for that patina, it turns out that not all the interior trim is original. Jean is handy with an industrial sewing machine; she was doing trimming for Four Ashes back in the early 1980s, so she fired the skills up again and re-leathered the back seat. ‘We had a dog, a Labrador, and we used to go to Wales. The dog got wet and that ruined the leather. The carpet was shot, too, so I re-made that.’ Yes, this is a car to be used; the joy is in the driving, the exploring.

Now, you probably want to know what the DB MkIII is like to drive. So do I, having up to now not driven an LB6-engined Aston with its block full of those intriguing ‘cheeses’, and Jean is happy for me to have a go. I can see, and feel, the tape around the steering wheel’s spokes where they join the rim, covering cracks beneath. Patina again. ‘We’ve had some new ones,’ Jean reports, ‘and they crack in no time. They’re just not quite strong enough.’ 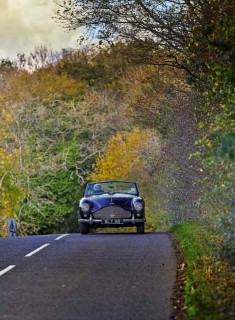 Ahead of the wheel is a proto-DB4 instrument panel, as shapely as that front grille and a leap forward from the DB2’s flat, symmetrical dashboard. And, of course, the overdrive switch. We move off; it’s a gutsy, torquey engine, apparently in DBD specification with those triple SUs and giving 235bhp with the help of its new aluminium cylinder head.

The steering, though heavy at low speeds, is accurate in a way I wasn’t expecting – today’s re-made steering box components are why – and the whole car feels unbreakably all-of-a- piece. Good firm brakes, too; this is how old cars should be, functioning as they were designed to do with no sign of age-related tiredness. You could easily drive big distances in this car. Jean and Chris do just that.

Back at Four Ashes, Chris talks me through the engine rebuild. Jean has already told me about how new MkIII blocks hadn’t been available for years, and how WLY’s original one was used as a pattern. That was while the car was laid up for what turned out to be 15 years, the head fitted to it back in 1975 for its drive from Wiltshire having cracked. ‘It didn’t have a thermostat,’ Chris explains, ‘and the head cracks without one because water doesn’t flow properly around two of the cylinders. It has a decent heater now.’

That Jean had taken the engine to 6500rpm in the esses at a Wiscombe sprint event didn’t help, either. It was getting through ‘gallons’ of water, and it was time to take it apart. ‘The main bearings were shot,’ recalls Chris, ‘down to the copper with no white metal left, and the block was cracked by the top of the liners.’

So a new block, a new crankshaft and a new head were all gathered together. ‘We used the best race parts,’ says Chris, ‘the rods, the crank, those super-versatile camshafts, the triple-carb inlet manifold with small ports to keep the torque high. In 2016 it was all built, and the plan was we were going to take it on holiday to Sicily. But it touched 8000rpm on the dyno for a few seconds when we were testing it, and the piston rings had shaken themselves and flattened out. So it needed new rings, and it didn’t go on holiday after all.’

‘The engine sounds great, deep and free- breathing, helped by being uprated with a trio of SU carburettors in place of the usual pair’ 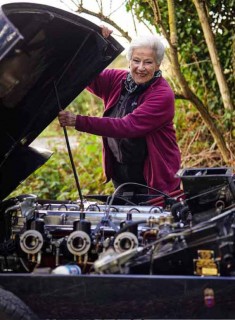 Jean and Chris have taken it all round Ireland, though, and with a few ignition issues sorted out WLY is running very efficiently. ‘It did about 12mpg when we first had it,’ Chris chuckles, ‘but it does 20mpg now. Adrian [Chettle, friend and part-time Four Ashes engineer, owner of a DB MkIII coupe] gets 26 to 28 from his.

‘Jean’s car has never had a restoration as such, just ongoing use for goodness knows how long. It’s turned out to be a really good car.’ I turn to Jean, to see that she is looking very happy indeed. 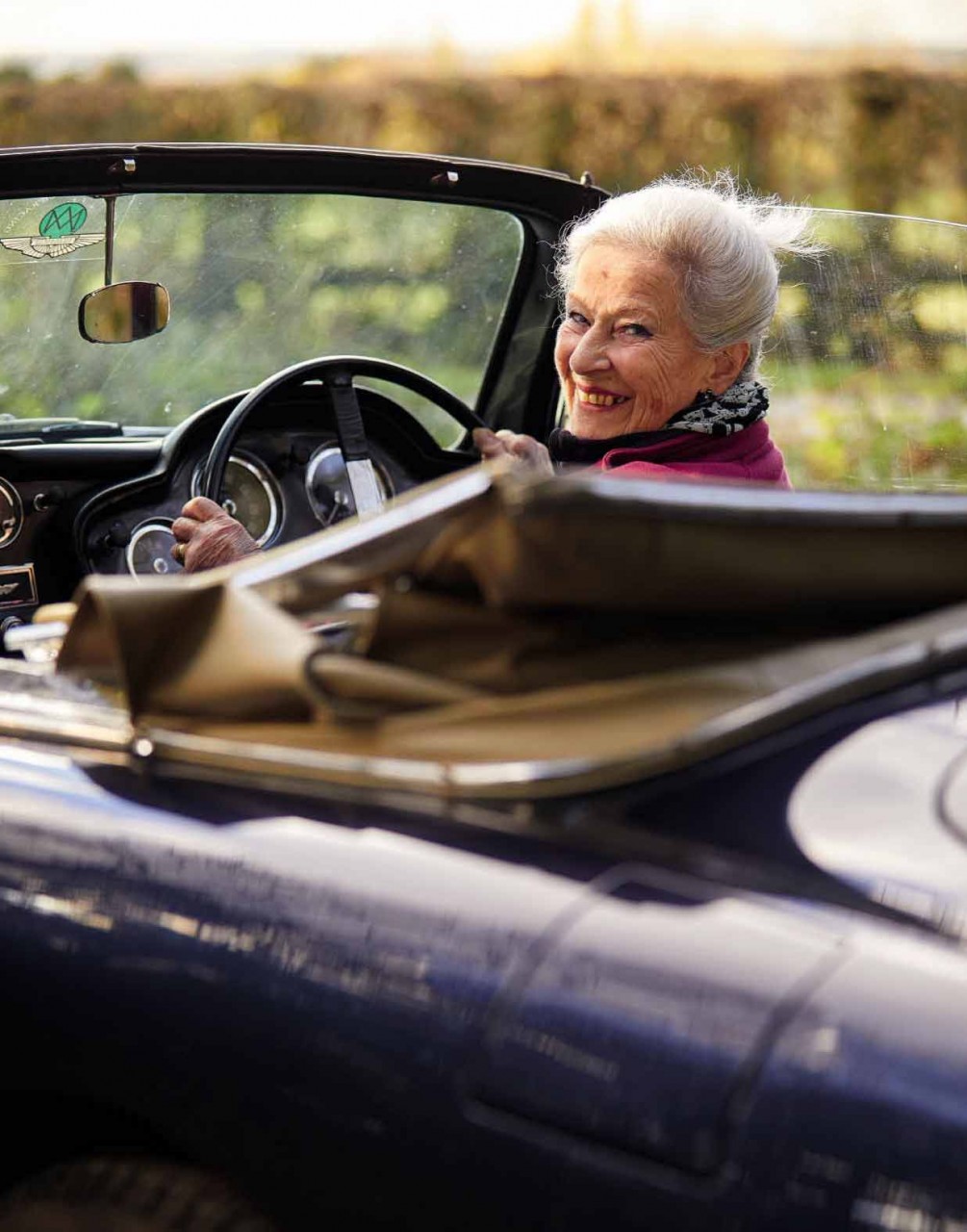 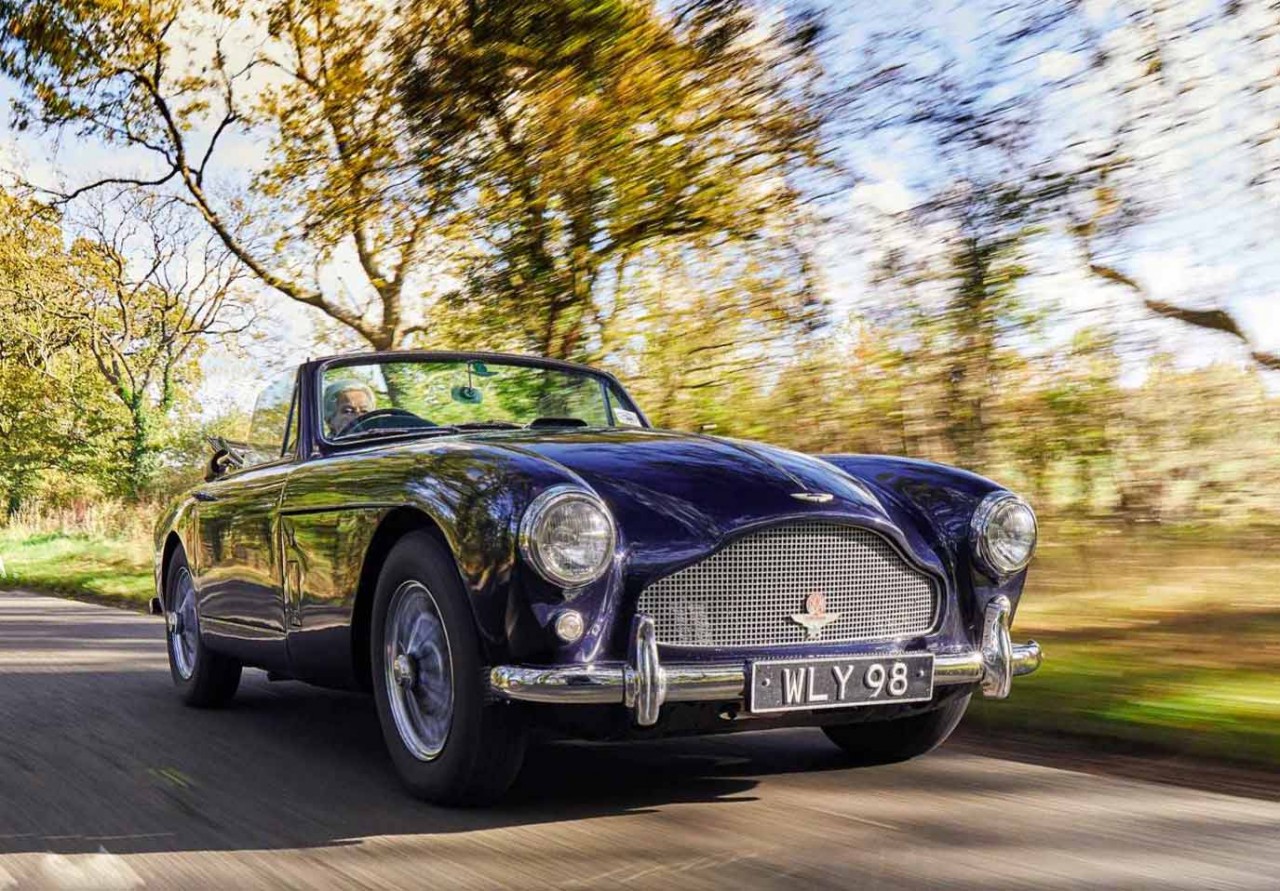 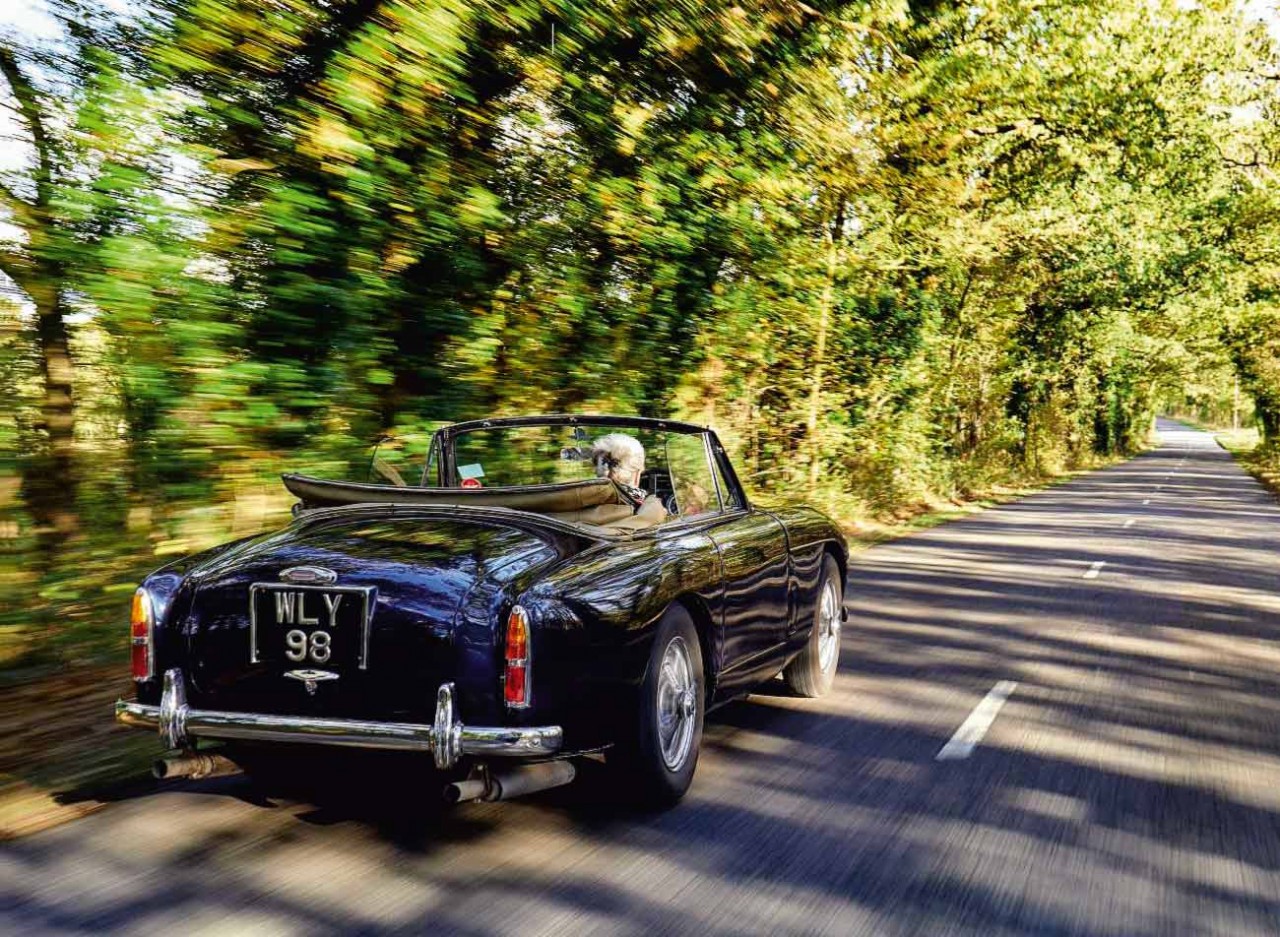 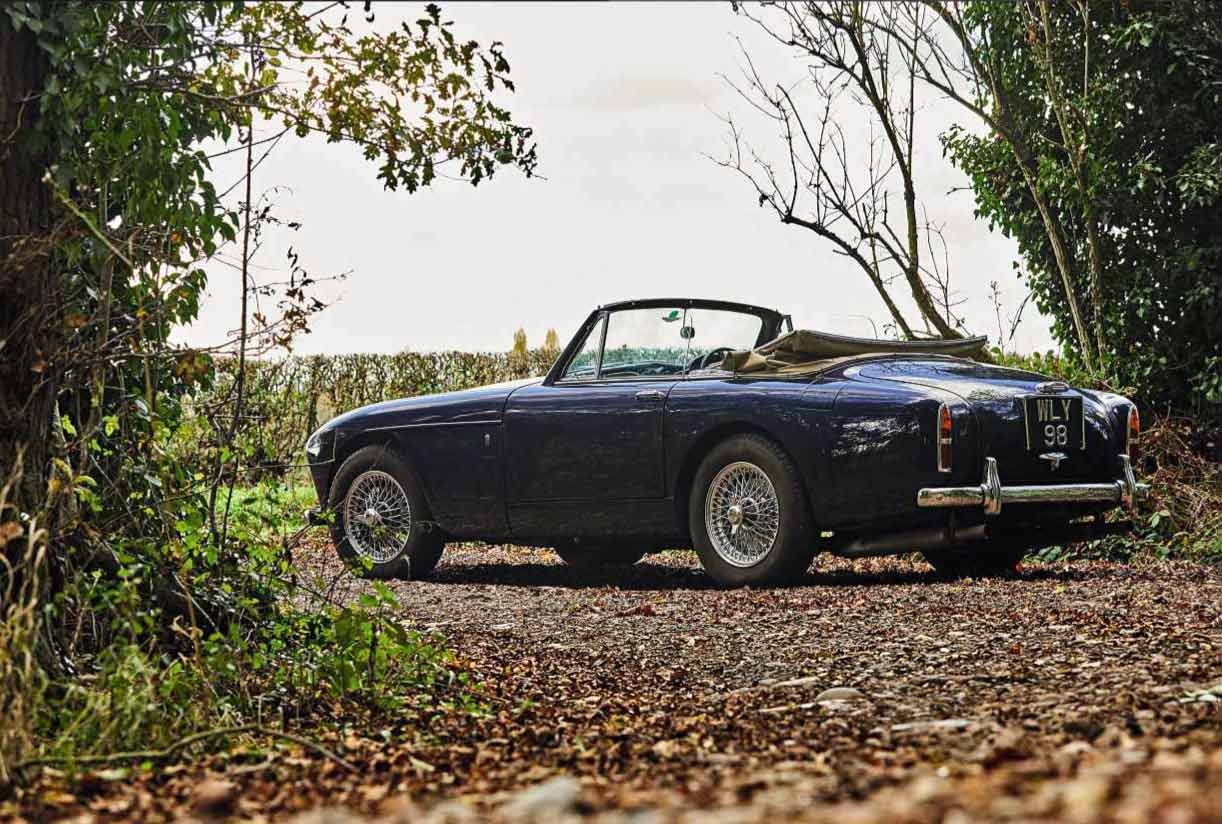 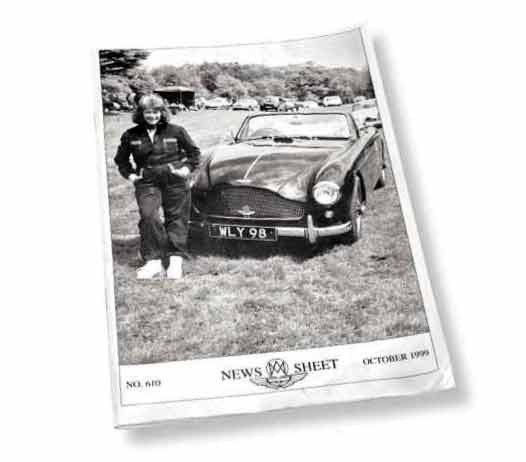 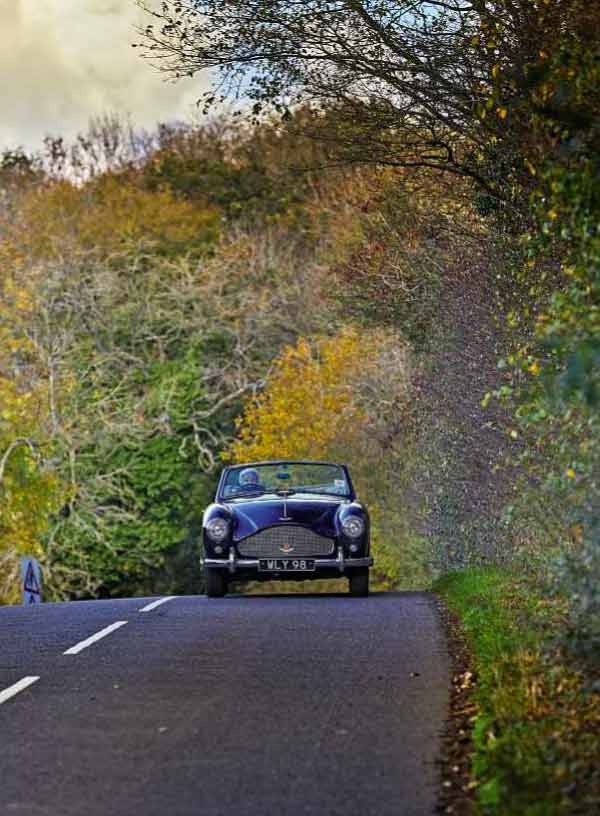 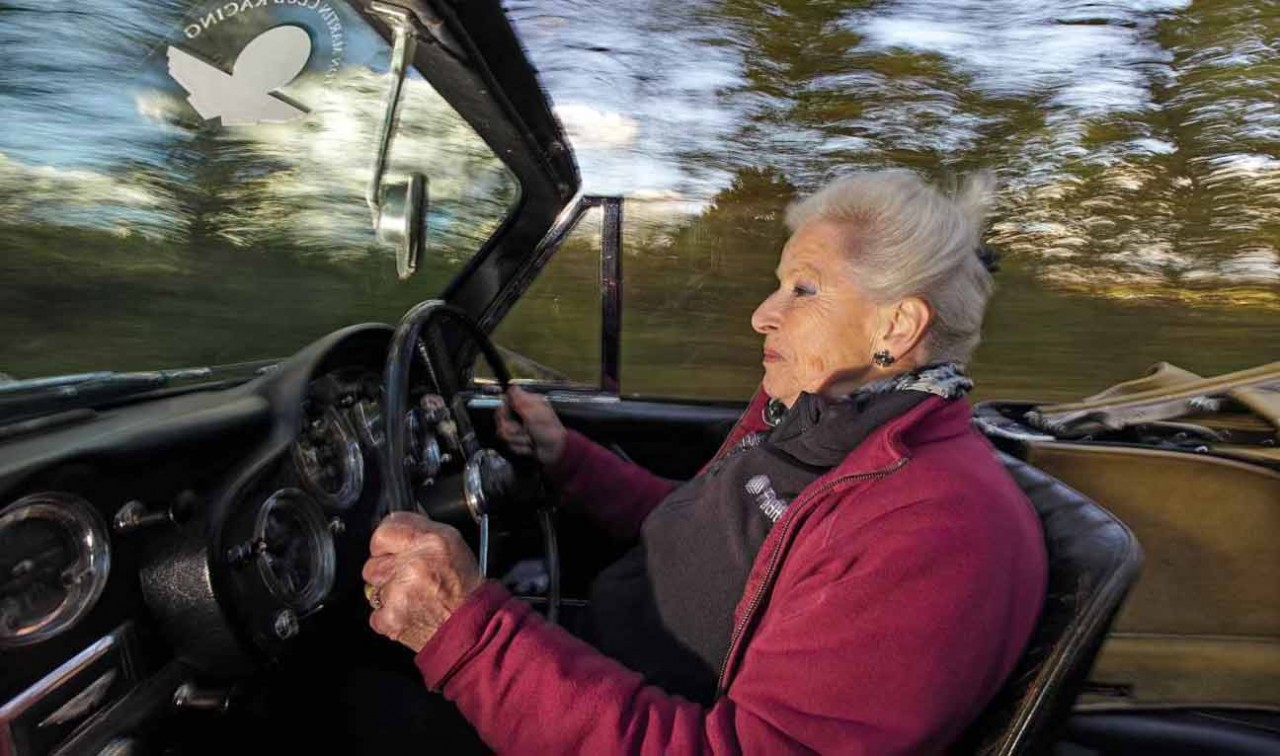 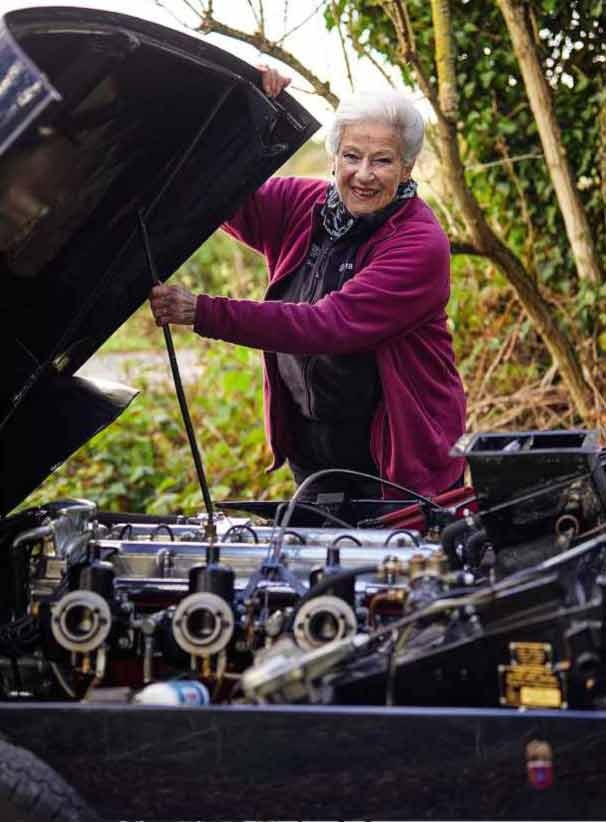 Above and right: Jean and WLY on the cover of the AMOC’s News Sheet in October 1999, pictured at a hill climb, and right, still enjoying every moment at the wheel 20 years on.