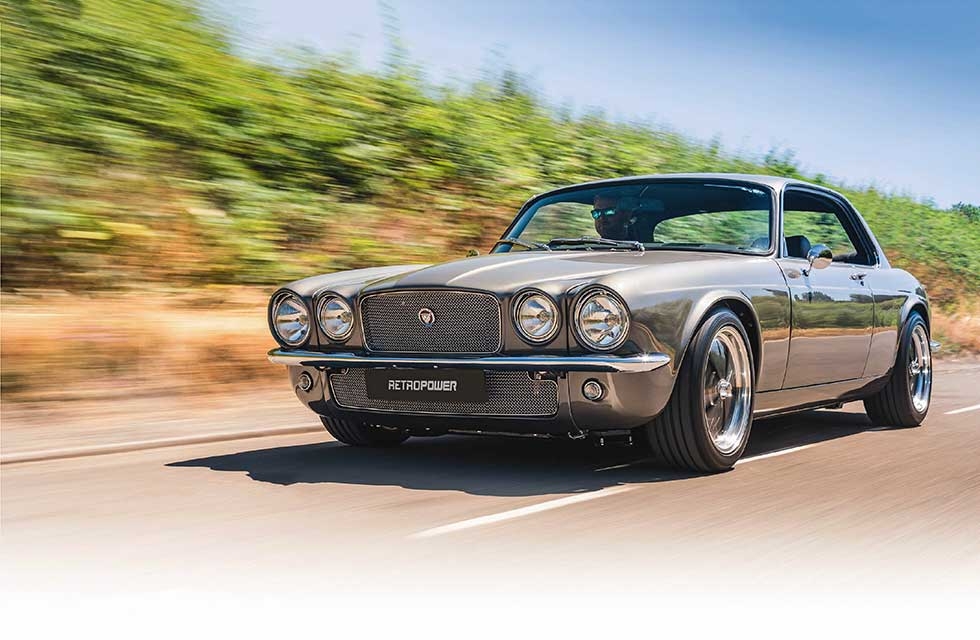 XJC V8 Restomod A quite remarkable overhaul. Every now and then, a modified Jaguar comes along which truly excites, and only seem to enhance the original. We reckon Retropower’s XJC is such an example, and couldn’t resist taking a closer look. Words: Ian Seabrook. Pics: Chris Frosin.

When it comes to modified Jaguars, I must admit that I’m rarely that impressed. These cars were so stylish, and so well engineered that it seems folly to mess with the formula too much. Maybe a set of Dunlop alloys can add a hint of menace to an E-Type, and bonnet louvres can give a racecar vibe to a Mk2, but making huge changes can all too easily detract from the start vehicle, rather than enhance it.

But, this XJC, created by Hinckley-based Retropower, is very different. I first saw it at the NEC Classic Motor Show in 2016, where it sat on Retropower’s stand, unfinished, but nonetheless attracting a huge amount of attention. The huge wheels, the modified rear valance and the mesh grille all shouted performance, yet did not spoil the beautiful lines of the XJC. I had to know more. Started by two brothers, Callum and Nathaniel Seviour, Retropower has grown into a full blown restoration and modification facility, with intricate builds, stunning looks and healthy power increases all part of the standard mixture – whether it’s a Mercedes-Benz or McLaren F1 designer Gordon Murray’s own Ford Escort.

“Having seen the car in its nearly-there state almost two years previously, it was quite something to see the finished product”

Applying their usual formula to something as stylish as an XJC was certainly not an easy option, but customer Ian Chinnock wanted a car to replace his modern BMW M5 that would offer similar performance, but have rather more class about it. A modified XJC seemed to be a good way to achieve it. Ian says, “I have always loved the XJC, since I was a child in the 1970s. You never saw many about due to the short production run. They popped back into my mind about four years ago, and I thought about using one as a daily driver, with a later Jaguar V8. I started to look into companies that could build this car for me – I don’t have the skills or the time. I discovered Retropower and made contact, and it sticks in my mind that Callum said ‘I have always wanted one of them too.’ I got some references and paid them a visit. Callum suggested a crate LS3 motor for better reliability. I was already familiar with the engine through my love of custom cars, so I said yes. I wrote a spec sheet and, as I own a design company, I was able to have some suggested styling modifications drawn up. I had thoughts on rear arches and valances, bumpers, wheels and the interior.”

Callum, who tends to oversee the visual development of the projects, knew that keeping it simple was the key. “To start with,” he says, “the body modifications were exceedingly minimal. That changed as the project developed. Once we had a bare bodyshell, ideas developed. The rear wheelarches, for example, are to the same profile as the fronts. Then we started to design a new rear valance as per Ian’s wishes. We also suggested the inset front grille, Spitfire starter button and lower ride height.”

To begin with, rust repairs were the priority, with a fair amount through the structure. The car had been chosen with this potential in mind. “The main thing was to find a car that hadn’t been messed around with or painted,” recalls Callum. “We didn’t want someone else’s restoration. This one had been partially stripped for restoration, with most of the paint off. It was an ideal place to start.”

The rear arches were badly corroded, so work was always going to be needed there. Knowing larger wheels and tyres were likely, the change was driven by need as well as the pure aesthetic.

Similarly, the rear valance would need reworking to allow the fitment of larger exhausts. Just like the XJ, these pass through the valance, which requires them to be very stiffly mounted.

As work progressed, the fine detail work began, and that’s what really sets this car apart. With the body repainted in Jaguar Opalescent Gunmetal, little design tweaks could be incorporated. The front indicator units are circular, and sit in a reprofiled front valance.

The bumpers mounts have been adjusted, so the bumpers sit closer to the body. The rear bumper has been reduced to a pair of stylish quarter bumpers, with front bumper corners grafted onto the original side sections. At the front, the over-riders have been deleted, which really opens up the face of the car. Stainless steel mesh is used for the main openings, bringing XJ-Rs of more recent times to mind. “I reckon there was a week’s work in the grille,” says Callum. The vinyl roof was never going to make a return, which at least allows us to confirm that it doesn’t simply cover a clumsy repair line in the roof as is often claimed.

The beauty isn’t just skin deep however. Under the bonnet now lurks a General Motors LS3 V8 engine, which produces 430bhp thanks to an Omex ECU and wiring loom. It is linked to a modern, programmable automatic transmission, also from GM. That, of course, meant upgrading the steering and suspension, so the entire rear cradle from a mid-1990s XJS was fitted, which includes a limited slip differential, wheel speed sensors, outboard ventilated disc brakes and better suspension.

At the front, Eibach lowering springs, SuperPro bushes and Bilstein dampers have been used, along with a late XJS steering rack, which offers a quicker response. Lowered spring pans allow the front end to sit a little lower, while a Fosseway Performance brake upgrade means six-pot calipers allied to ventilated and grooved discs. The front hub carriers also have wheel sensors, and a Teves antilock braking system is fitted, from a Mk3 Volkswagen Golf of all things.

The wheels are American Racing VN500s, something the owner was keen on from the very start, and they look just like enlarged Rostyle wheels that were very common when the XJC was new. They are a mighty 17 inches in diameter, shod with low-profile Goodyear Eagles – 225/45 at the front, and 245/45 at the rear.

There’s a mix of old and new inside too, with the entire interior completely reworked. The gearlever looks identical, though it does actually now control more than three ratios. A chunky sports steering wheel looks the part, and is backed up by gorgeous dials – New Vintage ones from the USA. The main dashpanel is aluminium, but hydro-dipped for an interesting finish. The seat frames were beefed up and the seats retrimmed in-house, in brown and black leather. The smell is quite fantastic, as is the craftmanship. There’s also an Alpine stereo and amplifier, with a sub hidden beneath the driver’s seat. XJS heating and air conditioning helps provide modern levels of comfort. The final winning touch is a start button from a Spitfire aeroplane.

Having seen the car in its nearly there state almost two years previously, it was quite something to see the finished product, and to hear that V8 engine fire into life. Sadly, the car was still undergoing its very first trials, so we were unable to drive the car, but a few conclusions could be drawn from our mobile photography shots.

Number one, the noise is utterly fantastic. That, and the beautiful looks, mean this car turns heads everywhere it goes. Secondly, the ride is not quite to Jaguar standards. It is set-up very much for firmness, not unlike a modern XJR, so the marvellous float has been lost. Mind you, the original engineering team did not have 430bhp to try and keep in check! There was still some transmission tuning to do, one reason we were unable to drive it being that Retropower had barely covered 50 miles in the car itself, and this fine-tuning takes time. Still, the overall impression was of incredible performance at your beck and call. There’s so much torque that you certainly don’t have to wait for the revs to rise. One squeeze of the throttle pedal and you’re away.

As we settle down to take some static photos of the car, I can’t help but just stare at it. To me, this car is just sheer joy in metal form. Retropower has managed to take an already-attractive car, and make it better. There really is not a line out of place, and delicious details abound everywhere you look. It certainly is a case of if you must modify something, make sure you do it properly.

Since shooting the feature, Ian has taken delivery. “It’s a stunning car, and Retropower has far exceeded my expectations. That had a price, as it has cost three times the initial budget. It really was worth it, and I love the creation it gets. When driving around in it, it generates smiles on everybody I pass. There’s no sneering like a Ferrari driver gets. I’ve had cyclists stop by my side to discuss it and even stopped a wedding as all the guys turned around and gave it a thumbs up!” That sums it up nicely I think.

Surely, a Jaguar is all about attracting attention for the right reasons? This car does that in spades. It’s truly beautiful and a brilliant updating of an already stylish coupé.

“There really is not a line out of place, and delicious details abound everywhere you look”

The whole car sits much lower, on beefed up suspension. Pillarless coupe lines look awesome. Seats were retrimmed in brown leather. Beautiful New Vintage speedometer may not go high enough.. Interior revisions are exceedingly well executed. “Once we had a bare bodyshell, ideas developed. The rear wheelarches, for example, are to the same profile as the fronts. Then we started to design a new rear valance.” – Callum Seviour Above: Grille took one week to construct by hand. 17″ American Racing VN500 wheels look spot on. Some details, such as the attractive fuel filler, are unchanged. General Motors LS3 V8 provides 430bhp, and electrifying performance.  Mesh grilles adds XJR-esque menace to the looks.