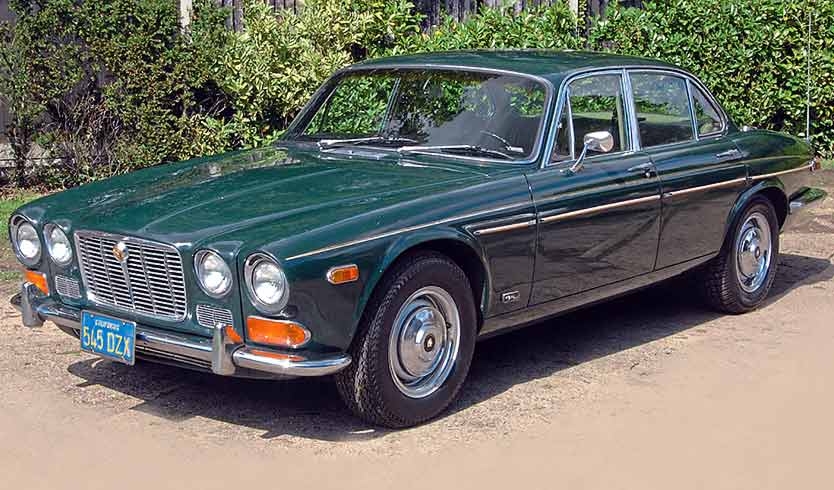 XJ6 Series 1  Enjoy some Hollywood glitz as we drive the Series 1 XJ6 that was first owned by singer Nancy Sinatra.

Nancy Sinatra may have been born into Hollywood royalty, but her talents were good enough to put her up there with the best. Like her father, she made hit records, appeared in films and also had one or two interesting cars. Being born of successful parents – and possibly the greatest US icon ever – could have had a negative impact on her because of the shadow of expectation that looms in an almost judgemental fashion, pointing the finger and asking, “Can you do better?” Not many children of famous parents do, but Nancy was given an opportunity and she made it work for her. It was said that where her father, Frank, was old-school crooner, Nancy epitomised the excitement of the Sixties.

Nancy was the first of three Sinatra children, all with his first wife, Nancy Babato. When the family moved to Palm Springs, California, in 1947, Nancy put her energies into learning the piano, took dramatic-performance lessons and voice training. She was serious enough for her father to take note and, at the age of 20, she appeared on his show welcoming home Elvis Presley as he returned from the army (she had also appeared in two episodes as a child, in 1957 and 1958).

Her recording career began in 1961 but didn’t go too well until she met songwriter Lee Hazlewood. He changed her image by not only dropping her singing voice to a lower key, but by convincing her to adopt a Carnaby Street image of bleached-blonde hair and heavy makeup. It was a winning combination and the song, These Boots Are Made for Walking, went on to be a phenomenal success, reappearing time and again over the years. It was so successful and earnt so much money that Hazlewood bought Nancy a new Datsun Fairlady in 1966. Hardly an earthshattering car, it did have reasonable MGB like performance. But of more importance, it was different; to engage with something this unusual showed a real interest. In that same year, Nancy rode behind Peter Fonda on a Harley Davidson chopper in the counter-culture film Wild Angels, pre-dating Easy Rider, which went on to develop its own cult following. We’re not sure how long the Datsun hung around, but it did survive, and popped up for sale a few years back.

In 1967, Nancy starred in her television special, Movin’ with Nancy, and was seen driving her own 1957 Ford Thunderbird. Nancy was getting serious. This car, finished in dark red, was a limited-edition run of around 200.

The 312cu in V8 engine was supercharged and produced around 300bhp. Nancy married her second husband, Hugh Lambert, in 1970 (he passed away in 1985), who took the Thunderbird to a custom legend, George Barris. In his book, Cars of the Stars, Barrismentions the car Arriving with instructions from Lambert to install a Lincoln V8 engine, carry out some subtle alterations and change the colour. Then, finished in yellow (to match the interior), it had reshaped wheelarches and Ansen slot-alloy wheels. Nancy loved the car, reckoning it cornered like a dream, and said that with living in the hills and driving in the canyon she needed the traction. The T’bird stayed with the couple until 1976, and, although it was put into storage in 1980, it also has survived.

Like her singing and acting, Nancy had inherited a love of cars from her father. It was famously recorded that Frank saw the new E-type in the Hornburg showroom in California. Apparently, he wanted to buy the opalescent bronze open two-seater (almost certainly chassis number 8755006), but his request was denied. There were only two E-types in the showroom (open and closed coupes) and they were needed to show customers. Sinatra wasn’t best pleased. We were unable to discover if he did finally buy an E-type, although it is known that he owned two XJ-S and a Series 3 XJ6.

The first XJ-S was a 1976, gifted to him by his fourth wife, Barbara Marx. He responded with a Rolls-Royce Silver Shadow, finished in light blue to match his famous eyes. In 1986, he bought the XJ6. The other XJ-S came in 1989. He kept this in constant use until his death in 1998, when it showed just 11,000 miles. Lowmileage, perhaps, but it was used regularly around Palm Springs. A smattering of Rolls-Royce and a brief flirtation with a Lamborghini Miura was about as far as Old Blue Eyes strayed from home produce.

In 1971, records show that a 4.2-litre Jaguar XJ6 was sold to Hugh Lambert and Nancy Sinatra, both names appearing on the title with their Hollywood address. The car was put into regular use, and even when the Series 2was announced in 1973, there was no question of trading up. But the couple did like the Series 2 chrome wheels and, once again, approached George Barris about incorporating the wheels into the next bout of work. This time, nothing more was demanded than a change of colour, moving from British Racing Green to a very lively metallic light green.

Their XJ6 was more than a passing fancy because it stayed with the couple until the end of 1975. It was around then that Nancy eased out of the public eye to spend more time bringing up her two daughters, Angela and Amanda. From then on, any interest in cars seems to have faded away, and although she did make a digital-only album called Shifting Gears in 2013, featuring 15 previously unrecorded tracks, the only motoring connection was the heady days of the Sixties and Seventies. Hugh Lambert, though, did buy another XJ, a Series 2.

When the XJ6 arrived at Brentwood Motors’ showrooms in Santa Monica, it didn’t hang around long. Stewart Ann and signed up for ownership on 19 January 1976, and, without knowing too much of the first owner, paid $6,134. Although little paperwork exists from the Sinatra years, Ann and kept a very comprehensive record of his time with the car. It may be tiresome to wade through acres of paperwork, but it does reveal the extent of the care lavished on the car. Each service sheet contains details of any extra work required, like exhaust repairs or replacement hoses.

When under the charge of Angelo’s Jaguar in West Hollywood, a wallet with local maps and an emergency roadside service leaflet was included. In 1987, Angelo’s replaced the steering rack as part of on-going maintenance. There were some big expenses in 1991 – in February, the engine was rebuilt, and later in the year Ann and had obviously grown tired of the racy colour because he had the car resprayed back to the original British Racing Green, also adding some side rubbing strips at the same time.

Ann and continued to use the car in the Hollywood area until 2006, when a six-month period without use led to it being towed to the garage following a breakdown. A hefty $2,360.78 was spent on a new fuel pump, plugs, distributor points, battery and all associated parts. That last bill was in August 2006 and it is unlikely that the XJ6 saw much action after, being tucked away in long-time storage. Fortunately, the storage facility was good and, with the kind Californian climate, there was no deterioration.

Jim Cronin, of Classic Carriages, has an uncanny knack of sniffing out interesting cars, and when he heard about this Jaguar on one of his forays to California he knew he had to find out more. As it had remained with Stewart Ann and, Jim could deal directly with the last owner. Like many, Stewart was going through a period of rationalising, and, no matter how fond he was of the XJ6, it was evident that it had become an ornament at best and a liability at worse. His new Jaguar had to stand on the drive while the XJ was in the garage. Something had to give. There followed a lengthy conversation of the history, during which Ann and told how the Barris sticker on the screen irritated him, so he had scraped it off. Jim tried hard to conceal his disappointment.

But the paperwork at least remained intact, including the original factory wallet containing the handbook, USA Vehicle Safety Regulations information, and the Becker autoradio handbook. For Jim, this XJ6 was irresistible and the Jaguar was shipped back to his Upminster premises in Essex, where it is now fully UK registered.

There was a tinge of excitement in Jim’s voice as he called me about his latest find, and anyone who knows Jim would know that is an exception. The Jaguar was looking every inch a Hollywood star as it nestled outside Jim’s barn, where is resides with a stock of mainly Forties and Fifties American pick-up trucks. There is also another star’s car: the Bentley Mk VI that once belonged to George Formby. A Series 1 on Series 2 rims was a step too far for Jim, though, so he has fitted a set of the correct wheels, although the now redundant rims are still on hand. This car is so original in so many ways, but it also wears its history without shame. There is no trace of the Barris green paint, looking now like a mellowed original, which given that the last time this car saw a spray booth was 27 years ago is hardly surprising.

The body coachlines still look good, but the jury is out on the rubbing strips. Underbonnet, there are many of the original features, as well as an alternator from a V12 model, obviously deemed necessary in California.

It remains in good fettle inside, although the footwell would benefit from replacement carpets. One item of curiosity to European eyes is the manual choke lever, which is located to the side of the dash; it is correct, and would have been fitted as standard equipment to certain export markets. We had a brief drive locally, and it is good to report that the car behaved extremely well. Not only does it have a fascinating history, but this XJ6 is also a good representation of a Series 1, regardless of its past. As a footnote, Nancy Sinatra was entered into the Hollywood Walk of Fame on 6 December 2016.

‘The car was put into regular use; There was no question of trading up”