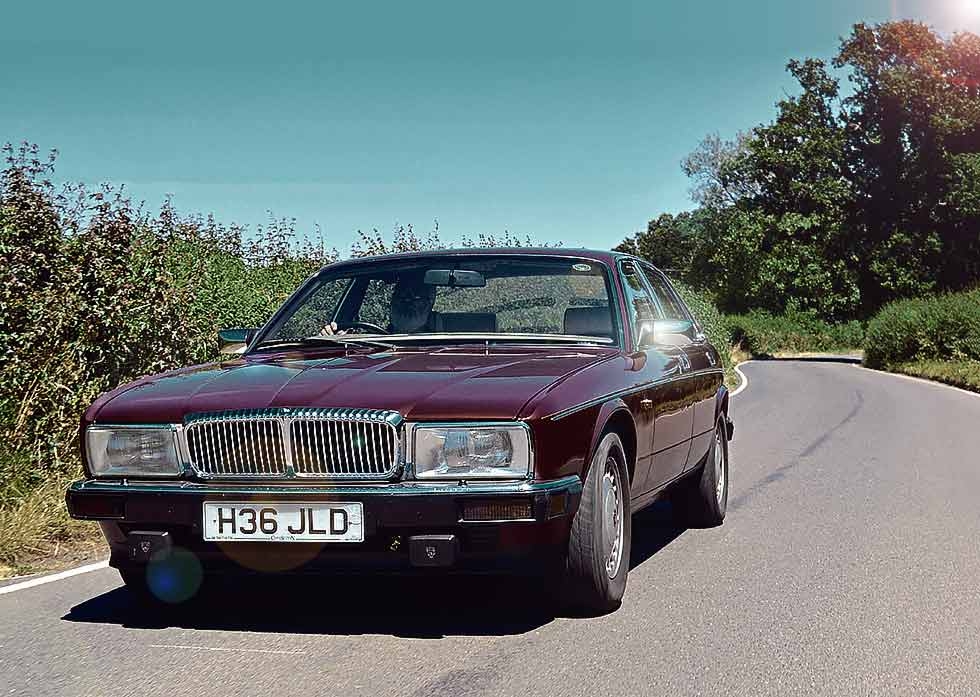 XJ40 Daimler luxury on a budget; what sets the Daimler apart from other XJ40 models. Find out what made the Daimler-badged XJ40 different from the standard Jaguar models and why they’re still a great buy for a budget luxury saloon. The Daimler 3.6- and 4.0-litre were the ultimate luxury variants of the XJ40. We explain what differentiates them from the standard Jaguar models and why they remain ideal if you’re looking for a bargain luxury saloon. Words Craig Cheetham. Photography Paul Walton.

The use of the Daimler badge on the Jaguar XJ40 presented an interesting juxtaposition for Jaguar when one of the oldest and most steeped-in tradition names in motoring history was applied to its most avant-garde car yet. It was a fusion of traditional and modern – a car aimed at Jaguar’s more traditional, often older customer – despite being the flagship model in its all-new range. But then, Daimler’s association with Jaguar was always a peculiar one.

Not to be associated with the Daimler company that owns Mercedes-Benz, the firm was originally a completely independent British operation that used the name under licence. In 1910, Birmingham Small Arms (BSA – better known for its motorbikes) bought Daimler, before selling it to Jaguar in 1960.

The first Daimler to share its platform with a Jaguar was the 2.5 V8 of 1962: a small-capacity 2.5-litre V8 engine of Daimler’s own design was fitted to the body and chassis of the Mk 2 saloon. Distinguished by its fluted grille, split front seat and standard automatic transmission, the 2.5 was marketed as a luxury-oriented alternative to the Mk 2 sports saloon – a theme that would continue until the last appearance of the Daimler name on a Jaguar vehicle in 2005, the X350-based Super V8.

When the XJ40 appeared in 1986, the Daimler’s position in the line-up was clear. It was to be something a little more exclusive than simply implying the upmarket trim level of the ‘Daimler Sovereign’ during the Series 1, 2 and 3 gestations of the XJ6. The Sovereign name, which had adorned Daimler cars since 1966 when it appeared on a badge-engineered Jaguar 420, became a Jaguar trim level, marking out the best-appointed variant in the Jaguar line-up (and becoming the most popular XJ40 in the process), while the Daimler name would be applied to a standalone model.

Known at launch as simply the Daimler 3.6, the car was the flagship of the XJ40 line-up and was only available with the larger engine. It was immediately identifiable thanks to its ‘fish-tank’ rectangular headlamps and fluted radiator grille, though there were other Daimler-defining features as well. The matt black boot plinth (deleted by the end of 1987), darker rear light clusters, fluted chrome boot trim, D-motif wheel centre caps and a chrome rubbing strip along the flanks of the car are the other giveaways.

Inside, the Daimler was the very essence of luxury. It had walnut veneer picnic tables in the rear and lambs’ wool over-rugs. As standard, the rear featured two individual seats separated by an elaborate centre armrest that folded down in front of a wood-veneered oddments tray – though a traditional three-seater rear bench was offered as a cost free option for those who needed a five-seater.

The leather seats in Daimler models were of a higher quality than those fitted to Jaguar variants, and featured a fluted appearance that echoed the style of the radiator grille and rear boot plinth, complemented by high-quality burr walnut inserts, with additional fillets around the window buttons on the doors. The door cards were also fully trimmed in leather, while all Daimler models were given a large sliding metal sunroof as standard.

Even the boot was luxurious, being fully carpeted, with a flocked spare wheel cover and stylised attaché case tool kit. Indeed, the specification was fantastic. Standard equipment included air conditioning, metallic paint, cruise control, headlamp power wash, electrically-adjustable heated mirrors, self-levelling rear suspension, eight-way adjustable electric heated front seats and a top-of-the-range branded Clarion radio-cassette player, which was the only place in the car where the Jaguar Leaper was immediately visible, on the cassette deck flap. Re-engineering such a small component for Daimler was clearly a cost too far in the XJ40’s development.

At launch, the Daimler 3.6 had a list price of £32,000, which was £4,000 more than the top-spec Jaguar 3.6 Sovereign. The Daimler was sold across European markets and Australia, but never in the USA, where the brand had no recognition. Instead, the equivalent model was known as the Jaguar Vanden Plas, and featured the same specification and interior treatment, but minus the fluted grille.

In 1990, the Daimler 3.6 was supplanted by the Daimler 4.0, in line with Jaguar’s evolution of the model’s AJ6 powerplant. The 3,590cc unit was bored out to 3,980cc, with a power increase from 221bhp to 235bhp and a significant increase in torque from 248lb ft to 285lb ft. The change also brought in a new four-speed ZF automatic transmission with electronic control, which responded to the user’s driving style to adapt its shift pattern accordingly. The 4.0-litre models are identifiable by the addition of delicate chrome detailing around the rear light clusters, but the biggest changes were inside, with the old (and highly unreliable) dot matrix display and electric dash being replaced by a much more traditional instrument pack that was considered both more elegant and far more efficient. The Clarion stereo cassette players went too, replaced by new Alpine head units that were CD-changer compatible.

Carl’s car is typical of a well-maintained, usable XJ40, in very presentable condition with no evident corrosion. He bought it at just the right time, as you’d be looking at at least three times his investment for the same car today, although even then you’ll get a tremendous amount of car for the money.

Driving it in a modern context reminds you of just how luxurious the Daimler was compared to standard Jaguar models, something you notice immediately thanks to its thick wool floor rugs and sumptuous cream leather. The narrow steering wheel and delicate walnut veneer give it the feel of a true luxury car – akin to a Rolls-Royce or Bentley on the inside, but with the performance and agility that you expect from a Jaguar. Certainly, the 4.0-litre engine is no slouch, feeling as eager and lively as it ever did despite this car’s 120,000 miles. The impressive acceleration is matched by a throaty exhaust note that brings a note of Jaguar’s sports saloon heritage to Daimler’s purely luxurious image.

Back in 1991, when Carl’s car was new, the Daimler would have been the perfect car for ‘old money’, with all the accoutrements expected by retired army majors and former captains of industry. A cliché? Maybe, but this was the market at which the car was targeted, while the Jaguar versions were aimed at a more youthful one. In the rear, the Daimler feels every inch like a car to be driven in. The sculpted rear seats offer better comfort than a standard rear bench, while their design also helps to offset the limited rear legroom of the standard wheelbase XJ40. The detailing is beautiful, too. Flip down the walnut tray tables, and the chrome-ringed drinks holders add to the upmarket appeal. Coupled to the XJ40’s traditionally wonderful ride quality, the Daimler 4.0 is a fabulous car that delivers a cossetting experience to both driver and passengers alike.

With XJ40 prices on the up, then, is it worth seeking one out? As the ultimate expression of luxury in the model range, absolutely, although from a collectability perspective it’s the V12s and later supercharged Daimlers that are likely to hold the most appeal, as the engines are a differentiating factor from all but the most specialised of Jaguar models.

The 3.6 and 4.0 are a great compromise: far less expensive to run and much easier to look after than a Daimler Double-Six, but with the same exquisite levels of luxury. In many respects, they’re the hidden gems of the XJ40 line-up.

Thanks to: Carl Tunnicliffe

THE LEATHER SEATS WERE COMPLEMENTED BY HIGH-QUALITY BURR WALNUT INSERTS, WITHADDITIONAL FILLETS AROUND THE WINDOWBUTTONS ON THE DOORS.