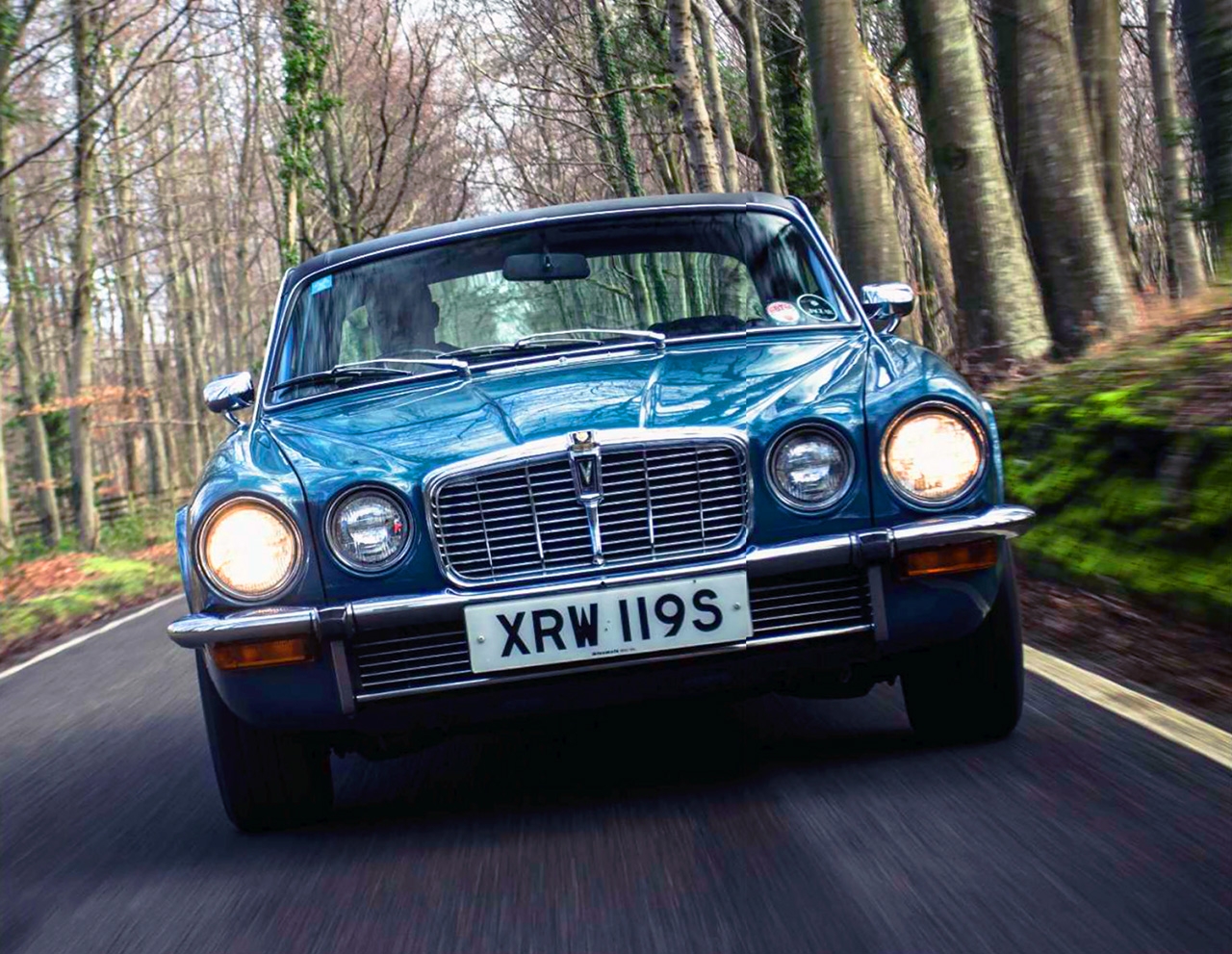 Jaguar XJ12C test-drive. It’s blue. Very blue. Squadron Blue on the outside, cosseting blue velour – not leather – on the inside. Driving an old Jaguar without cowhide beneath my trousers is an unusual experience, as unusual as seeing just more than 9000 miles on the odometer.

Total silkiness is the idea here. There’s 5.3 litres of V12 engine, in perfect reciprocal and rotational balance and with six firing pulses for every revolution. That obviously means six compression strokes for every revolution too, which is why the engine sounds as if it has no compression at all as I spin it on the starter. They all seem to merge into a continuous resistance.

On its 1968 launch, Jaguar’s XJ6 saloon redefined refinement in large, luxurious saloons, while achieving the clever trick of combining this with a strong and class-leading dose of dynamic flair.

Road noise was almost banished as those fat Dunlop SP Sport Formula 70s glided along the road, helped by hitherto-unseen levels of clever subframe isolation via rubber mountings, while the venerable XK engine turned more mellifluously than ever. However, nicely timed for the energy crisis, Jaguar had a new V12 engine ready for yet more serenity. 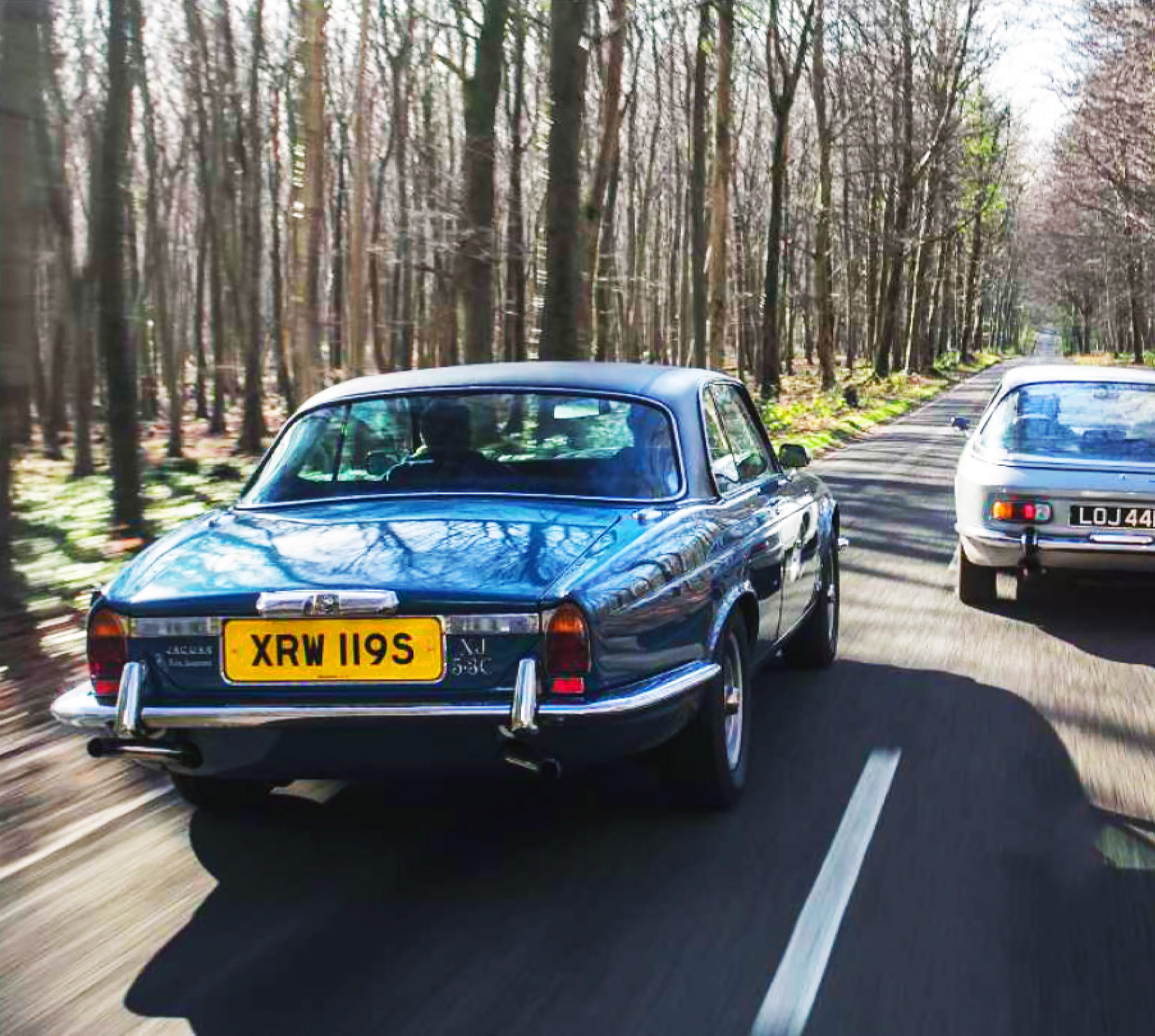 Just 1873 examples of the XJ12C rolled out of the factory.

The Jaguar doesn’t so much streak off down the road as gather pace, near-silently

Walter Hassan, late of Coventry Climax (by then owned by Jaguar) and Harry Mundy, a former Autocar technical editor, designed the V12. Fuel efficiency was not its forte – about 16mpg is as good as it’ll get. But it made the XJ12 one of the most desirable saloons in the world.

Then the XJ got a facelift for 1973, with three body styles instead of one. There was a new, longer-wheelbase saloon, and on the original short wheelbase was now offered a two-door coupe whose vinyl roof covered up the joins in the thick rear pillars required to restore rigidity to a body now bereft of centre pillars. I can wind all the side windows down to make a completely open space above the waistline. It’s surprising how the pair of long, frameless doors, those thick rear pillars and the unexpectedly cosy rear-seat accommodation make this XJ feel smaller than it is; a proper ‘cut’ coupe, even though it isn’t. The cabin exudes a Jaguar-unique blend of luxury and mid-Seventies Leyland cost-paring, with a fine array of Smiths dials set in polished wood but a nasty upper-centre console of black vacuum- formed plastic housing a Dralon-lined tray and held on by crude screws. 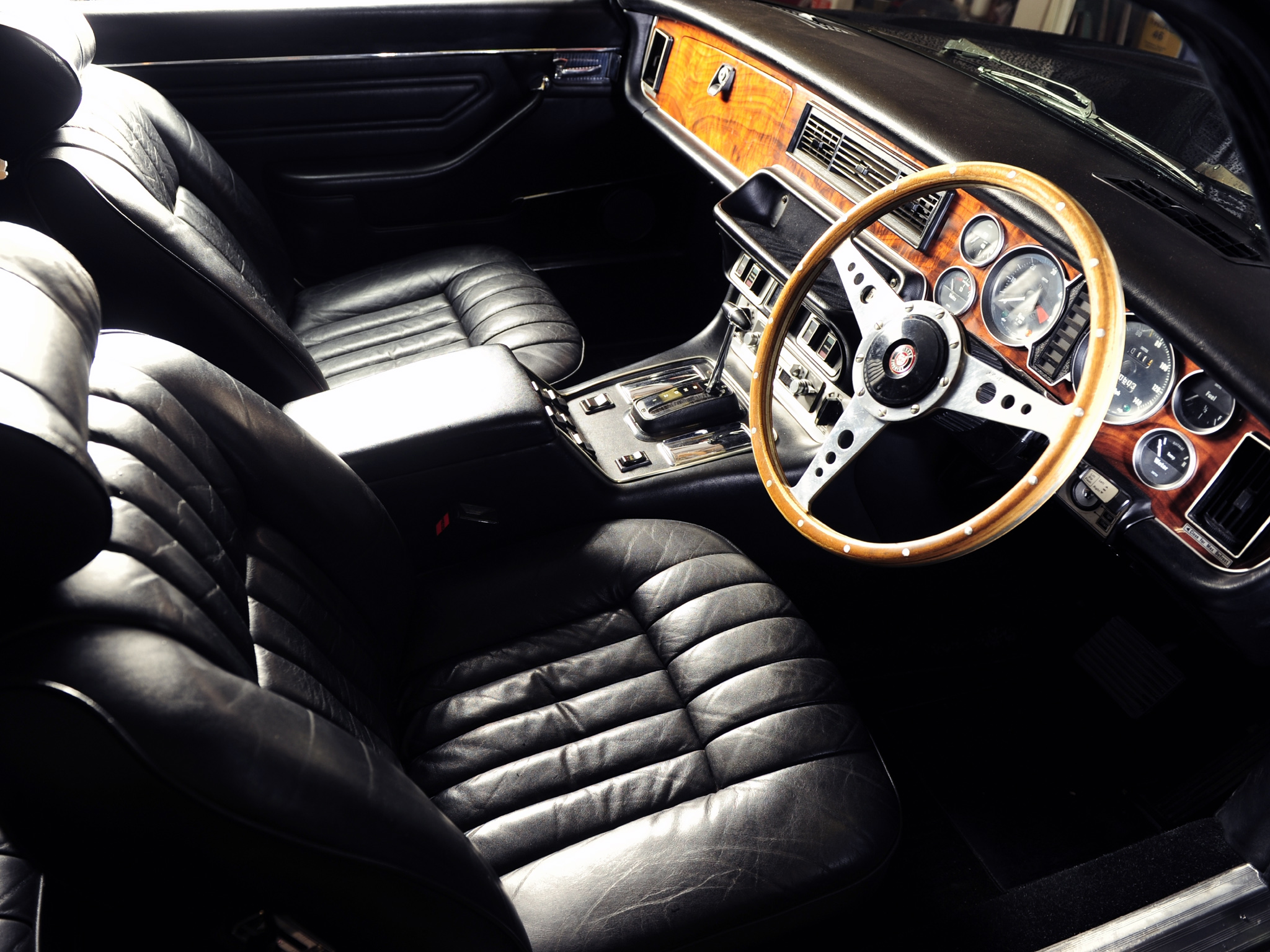 Genteel image belies the ease at which three-figure speeds can be attained. Lack of leather doesn’t make this a less luxurious place to be.

By modern standards this is a simple cabin. And this 1977 car still smells quite new, which bodes well for the authenticity of the drive to come. The automatic gearbox has just three forward gears, and the overall gearing gives just 22.9mph per 1000rpm in top. That seems very shortlegged by today’s standards, but there’s 135mph on offer here and a brisk 8.6-second 0-60mph time.

The Jaguar doesn’t so much streak off down the road as gather pace, near-silently unless I goad the engine into revving out its smooth, seamless blare. It’s heavier than the

Jensen and has, at a modest 240bhp, less power, but it feels faster mainly because the gearbox is more co-operative. Wieldier, too; helped by dampers obviously in the prime of life, the XJ12C is unexpectedly lithe and accurate in its response to my commands via precise steering which, while still light, is meatier than I remember from the last saloon XJ12 I drove.

RIDE ON THE MONEY

And that famed ride? Well… that damping has a light, deft touch to the way it holds the body steady over ripply roads, but when those roads are disintegrating in a way they did less in the Seventies, even this Jaguar suffers the odd clunk and thump. And I can feel that the body is less stiff than the saloon’s. However, this is still a car in which I can waft all day long on a wave of serene speed, on roads straight or sinuous. It’s delightful, handsome and rare with 1873 examples made over two years before the XJ-S rendered it redundant. Give me this over an XJ-S any day.

Heritage technician Dave Withers brought the Jaguar to our shoot. ‘It’s been with JDHT from new. It’s not a car we’ve campaigned greatly. It hadn’t moved for a little while before your story and there was a little problem with the air-con compressor, but we fixed that and an idler pulley making a little more noise than it should.

‘We try to keep them as authentic as possible and it’s had very little done to it: a brake caliper in 2006 and a recent battery, and that’s about it until now. It’s been a really good car.’