The July 1964 Ilford Trophy race for GT cars at Brands Hatch might have been a mere footnote in motor racing history were it not for a comeback drive from ‘Gentleman’ Jack Sears which has since entered into legend. Fastest qualifier Bob Olthoff was a non-starter in the European Grand Prix support race following a shunt in practice so, as the cars lined up on the grid, Jackie Stewart was the pole-sitter aboard John Coombs’ Jaguar E-type. Roy Salvadori slotted into the middle of the front row in Tommy Atkins’ Cobra. Fourth-place qualifier Jack Sears moved up a place from the second row to flank them in his Willment Cobra. Then something extraordinary happened.

As Sears blasted past the pits at the end of the second lap, he saw a black flag bearing the number 32. It was his number. Sears pitted, believing there must be a problem with the Cobra, only to find himself on the receiving end of a stern telling-off from an official for starting from the wrong grid slot. This unscheduled stop in the pits was his penalty. An aggrieved Sears then lit up the Cobra’s rear tyres, snaked down the pits – all the while shaking a fist – and proceeded to make up for lost time.

‘I did things that day that I had never done before and never did again, because I was so angry,’ he recalled in 2010. ‘I gave it the full treatment. I braked later, I pushed harder and suddenly I was two seconds a lap quicker than I had been in practice. I sliced past everybody.’ And that included Stewart with four laps to go. ‘I won the race and set a new lap record. It was as if someone else were driving the car.’

Sears would recall this race with a sense of wonder. That, and laughter. He would invariably go on to describe how car owner John Willment had voiced his displeasure to Deputy Clerk of the Course Basil Tye in the loudest way possible. Concluding that an apology was unforthcoming, he then brought matters to a head by manhandling Tye into an ornamental flower bed. Willment was subsequently fined £100 and barred from the pitlane at any RACorganised race meeting for the rest of the season.

If nothing else, this anecdote illustrates just how good Sears was in the heat of battle. The thing is, he didn’t need to have adrenaline coursing through his veins in order to win. His brace of British Saloon Car Championship titles were merely two gongs in a bulging resumé. He may have been a gentleman, but beneath the urbane exterior was a core of steel.

Sears, who died on 7 August aged 86, was an amateur driver long before the term became a slur. His grandfather had established the family fortune building up a successful shoe business, while his father, Stanley, had engineering and farming interests in addition to a sizeable collection of veteran and vintage cars. Born into privilege, young Jack was educated at Charterhouse School, and was given a Morgan 4/4 while still in his teens. It was aboard this car that he embarked on his motor sport career in 1948, before replacing it with an MG TC, which rapidly gained a supercharger.

After graduating from the Royal Agricultural College in Cirencester, Sears acquired Uphall Grange, a 600-acre estate in Norfolk. Motor sport was merely something he was involved in when not farming, but he did it well, whether it was racing a Lister-Bristol or rallying any number of BMC or Jaguar products. And, armed with an unlikely Austin A105, Sears emerged as the inaugural British Saloon Car Championship winner in 1958.

The class-based series saw Sears and Jaguar man Tommy Sopwith both finish the season on maximum points, with the title being decided by a duel in identical Riley 1.5 saloons over two five-lap heats, the drivers swapping cars in between. Sears, customarily racing with his tie tucked into his shirt, won the shoot-out on aggregate by 1.6sec.

Sopwith retired from driving shortly thereafter, and Sears applied his skills to his Equipe Endeavour squad from 1960 to 1962 in an E-type and an Aston Martin DB4 GT, among other desirable machinery. He wasn’t paid to drive but, as he was wont to say, he did at least stay in some of the finest hotels…

In June 1960 Sears, ever the all-rounder, landed a drive in a Yeoman Credit Formula 2 Cooper at Crystal Palace. An engine fire meant he missed practice so he was obliged to start at the back of the grid. He scythed through the field in pouring rain to finish third behind winner Trevor Taylor and Geoff Lawton. Team principal Ken Gregory offered him a permanent seat for the following year but, as a father of three with a farm to run, Sears concluded that he would stick to saloon cars and GTs thereafter.

In 1963 Sears joined the John Willment Automobiles squad and enjoyed class-winning success in a Cortina GT before upsetting the establishment aboard a 7-litre Holman Moody Galaxie from May of that year. The American battleship demolished the Jaguar opposition first time out at Silverstone, with Sears driving the entire distance in top gear.

He would be near-unbeatable to the end of the season despite a flood of protests from rivals left trailing in his wake. None was upheld, and Sears bagged his second British Saloon Car Championship title at a canter.

While perhaps remembered more for his skills in saloons, Sears also excelled in sports cars and that same year saw him take class honours and fifth overall at the Le Mans 24 Hours alongside Mike Salmon in a Maranello Concessionaires Ferrari 330 LMB. He returned for the 1964 event amid a media maelstrom. Sears recalled to the author in 2004: ‘It’s a minor claim to fame, I know, but I can say that I was the only man ever to race all three types of Cobra coupé. There was the AC car built for the 1964 Le Mans race in which Peter Bolton and I did 185mph on the M1 in the run-up.

Tony Martin, the nephew of AC’s chairman Derek Hurlock, was a newspaper man – on the illustrative side rather than a journalist – and he was there. He went back to Fleet Street and told all of his friends. It turned into a real story.

‘The publicity was massive and Peter and I then had to live with being blamed for the 70mph speed limit [being introduced]. Some years later, Tony met Barbara Castle, who had been Minister of Transport at the time, and he asked her if our 185mph run had prompted the imposition of the speed limit. She said it categorically had not. It had been in the planning stages for years.

‘Anyway, in the race, Peter was driving at night and had a tyre blow out. The car was badly damaged and he spent a night in hospital.’ At Le Mans in 1965, Sears and Dr Dick Thompson finished eighth aboard the Alan Mann-tended works Daytona Coupé, the sole survivor of the Ford-powered onslaught after all the GT40s had expired.

‘I had rather more fun in the Willment Coupé, though,’ Sears claimed. ‘John had tried to buy a Daytona from Shelby but instead Carroll gave him drawings to make his own. My first outing was the ’1964 3-hour race at Snetterton. It was blanketed in fog, but I knew that circuit like the back of my hand. I knew exactly where I was and won by a lap. I won next time out at Brands, too. That was a lucky car for me.’

Unfortunately, Sears’ luck ran out aboard another V8-engined sports car. A test session in a works Lotus 40 at Silverstone in September 1965 ended at Abbey Curve on the old GP circuit. Sears had been travelling at an estimated 150mph when the car left the road. He woke up in an ambulance en route to Northampton Hospital. His left arm had been severely damaged, Sears having been pinned down by the overturned sports-racer. The header tank had also split, which left him with scalding burns and they subsequently became infected. He would in time recover, but Gentleman Jack’s driving career was over.

But that wasn’t quite the end of the story. From the other side of the pitwall, he would go on to act as president of the BRDC. He was also a long-time chairman of the Ferrari Owners’ Club. Son David, in turn, was a successful driver before he established a championshipwinning F3000 team.

Modest, courteous and a gentleman to the end, Jack Sears was that rarest of things: a man for whom nobody in the pitlane had a bad word. That is a wonderful epitaph in itself.

Below. A wet Silverstone in 1964, and Sears is about to retire after being unable to avoid Tommy Weber’s spinning Mini Cooper, which has pushed the front wing onto the wheel; Sears in recent years with his 1963 Ford Galaxie 500, BML 9A, bought back from South Africa. 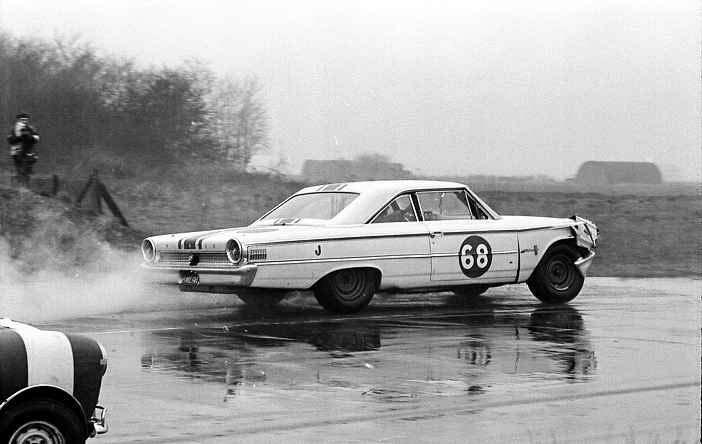 Clockwise from near left. Sears oversteers, in this case manhandling a Mk2 Jaguar around Silverstone in 1960; in cheerful mood aboard a Cobra; concentrating on holding a DB4 GT on the limit; punting AC Cobra ‘39 PH’ around Goodwood to second place in the 1964 Sussex Trophy; joshing with Bob Olthoff (middle) and John Whitmore (left) ahead of the BMC team’s bid on the 12 Hours of Sebring – a photo presumably not taken, to judge by the heavy overcoats, in Florida. 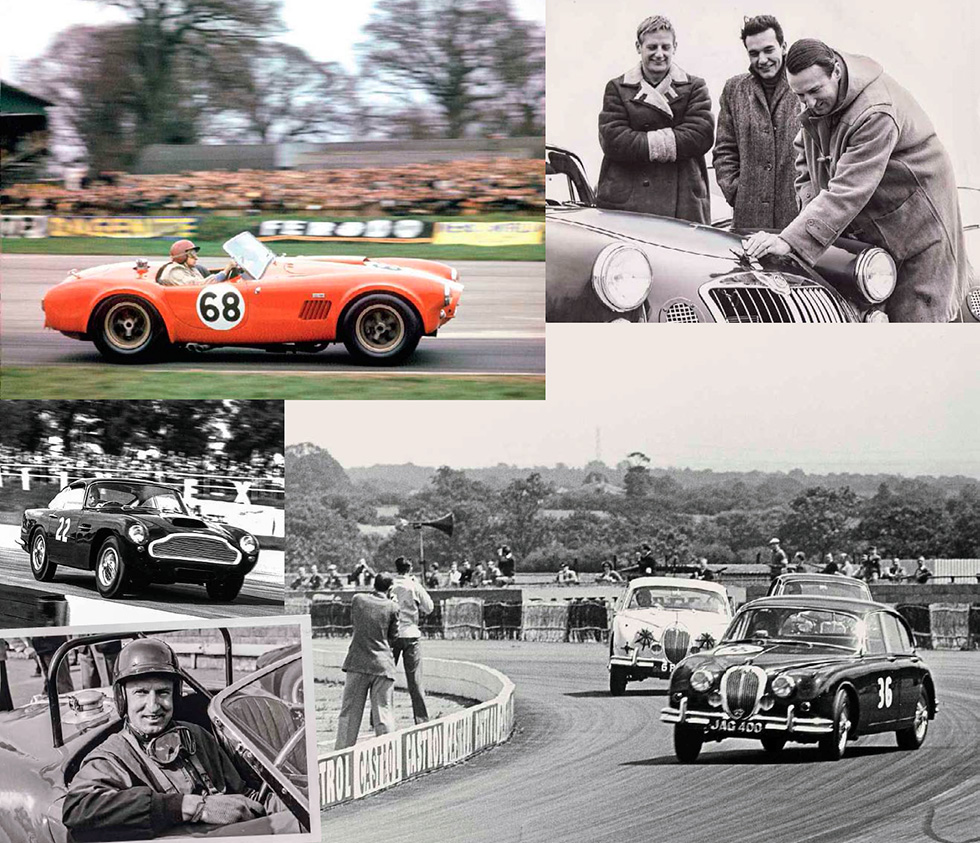 ‘He asked Barbara Castle, who had been Minister of Transport, if our 185mph M1 run had prompted the 70mph limit. She said it had not’

‘I did things that day that I had never done before and never did again, because I was so angry’