The open-roof version of the Milanese-built Iso Grifo sportscar debuted in 1966, designed by Marcello Gandini it apparently conflicted with the manufacturing philosophy of engineer Piero Rivolta. The car featured in this article is one of the 17 examples to be constructed.

“I never liked automobiles with an open roof. When I was a child, I would ride my bicycle for hours in the cold Milanese weather, and I longed for a roof above my head. You can imagine how keen I would be on convertible spiders, once I started manufacturing cars”. After hearing these words by engineer Piero Rivolta, heir of Renzo, founder of Iso Rivolta, the reader might be surprised to learn that a car for sun and wind lovers actually rolled off the production lines of the Bresso marque.

Rivolta himself would admit later on that the Grifo, his most famous and desirable creation, was actually conceived with an open roof. “We did not commission Bertone with the design of the coupe. But he badly wanted to present a car based on Iso Rivolta mechanics for the 1963 edition of the Turin motor show, and offered to bear all the costs. We delivered to him a chassis of a GT – presented a few months earlier – complete with mechanical parts, properly shortened and modified to comply with his requirements.”

The car, an elegant Gran Turismo featuring a long front bonnet and a wide wrap-around windscreen, was so convincing that two versions were immediately produced. One version, called A3/L, was shown on the Bertone stand and the other, called A3/C, was displayed on the Rivolta stand. This car would later be developed by Bizzarrini as the 5300 GT.

“The car largely met with the public’s approval,” explained Piero Rivolta, “so we immediately set to work, in order to start manufacture as quickly as possible. I still remember the testing operations on the Milano- Bergamo motorway. I was a student at the Polytechnic of Milan and I recall the terror in my father’s eyes when I sat behind the steering wheel. In one of the photos taken during the aerodynamics test of the wool thread movements at different speeds, my Grifo was running with both front wheels completely detached from the ground.”

The official manufacture of the coupe started in 1965. It was called Grifo GL and was equipped with a V8 5.3-litre Corvette engine. The previous year, Bertone had already presented the glamorous spider version (assembled on the second chassis of the pre-series A3/L), but it did not go beyond the prototype stage. “Let’s say we lacked the courage to realise a car for a tiny little market, at least in Italy. During the 1960s sportscar fans were keen on models with a hard roof. Convertibles were not so popular among customers looking for performance.”

As a matter of fact, the Grifo would be presented with the Targa type open roof version in 1966, and manufactured from 1969 under the name Grifo S2. “From the beginning,” continued Rivolta, “I understood that the solution ‘invented’ by Porsche would be ideal for the Grifo coupe, equipped with a sturdy central pillar to visually separate the roof from the rear windscreen.”

The hard top split into two removable sections, which replaced the traditional fabric hood and no longer suffered from water seepage problems and engineering faults of the folding mechanism. Moreover, thanks to the central roll bar, the rigidity of the chassis virtually remained unchanged. The first official example of the S, identified by the chassis number 97, was presented at the Turin motor show in 1966. It had an orange paint livery with black interior and its stainless steel top was split in two removable parts. A previous chassis (probably number 12) had been transformed as a Targa version, with a soft window which opened with a zip. It was prepared by the Milanese Carrozzeria Pavesi. Although this modification is not recorded in the Iso Rivolta production documents, it is original and genuine, as widely testified by the many photos taken in those years.

“There were very few S versions manufactured directly by Iso,” explained Rivolta, “Carrozzeria Pavesi was commissioned to install, when requested, the open roof on the Grifo coupes. It was only natural that when I decided to manufacture this Targa version – which by the way is one of the first designs by Marcello Gandini when he became the head of the Centro Stile at Bertone – we would turn to Pavesi to carry out the work. This is why most production sheets of the S record ‘prepared by Carrozzeria Pavesi’, and only a few state ‘prepared in-house’.

The car shown on these pages, chass is 286, is one of the few manufactured at the Iso Rivolta plant. The car rolled off the production line on 10th October 1969 equipped with a 350HP engine, mechanical transmission and Campagnolo spoked wheels. It originally had red paintwork with a black leather interior. The car was delivered to a German based customer and registered in Essen on July 1, 1970. In 1976 it was shipped to the United States where it suffered badly, including the addition of an automatic transmission. Quite likely, it was involved in a heavy accident and it stood in the open air for many years, until it was shipped back to Italy for restoration that began in 2010. After two years of intense work, ‘286’ was finally brought back to its past splendor, although in a different paint colour.

RIGHT: Although no Grifos ever left the factory finished in California Green it was on the option list.

“I really did not like the red paint,” admits the current owner, a collector from Lecco who also owns a 7-litre Grifo, “so I looked at the range of colours available back in 1986 and decided to choose California Green.” According to the manufacturers’ files, of the 13 examples of the S first series, and the four cars of the subsequent series (1970-1971), and the coupe, no Grifo client ever chose this striking livery. And it’s a pity, since it is indeed smart and captivating.

The Grifo S is very similar to the coupe (Grifo GL), apart from the removable hard top. The main differences lie in the chassis, which was slightly reinforced. During the renovation, the structure was further reinforced by strengthening the lower corners of the windscreen frame and the transmission tunnel. The car was restored by Negri in Clusone (Bergamo). The Negri’s are acknowledged Iso Rivolta specialists.

“It’s been a very complicated work,” admits Federico Negri, “because, besides being heavily corroded, chassis 286 had undergone many alterations. An automatic transmission had replaced the original 4-speed gearbox, which required some surgery of the main chassis structure. The original bonnet had been replaced by a fibreglass item taken from a Corvette; the same fate was sealed for many other details, including the steering wheel. Moreover, the rear of the car had been affected by a heavy crash which caused deforming of the anchorage for the De Dion axle. When the owner, eager to see his car with an open roof, removed the two parts, they no longer fitted back in place because the chassis was distorted. The engine was also in bad shape due to the long period of inactivity with some parts having been lost. It took us a long time and a lot of research to retrieve those details, because their shape and binding changed accordingly during manufacture. When the S was sent out for repaint we were extremely happy with the fruits of our labour.”

At the end of the long restoration, the owner said: “I just could not wait any longer. Years had gone since I purchased this car and I had almost lost faith in the possibility of completing its renovation. The behaviour of the S is different to the Grifo coupe and, even more, its 7-litre engine. It is softer and gentler at normal speed and does not tempt you to press on. It is more suitable for a scenic and holiday experience than for high speed driving. Compared to the 7-litre, it is a completely different car, lighter and less brutal.”

“As soon as I sat behind the steering wheel, I realised right away that my height was a problem. I am 1.75m tall and while I more or less fit in the coupe, the padded roof and the hooking system of the S requires me to bend my head significantly, when I sit in it. Fortunately, my plans are to drive the car with the roof open most of the time. But there is a further limitation with the S, the two sections of the roof are very delicate. It is quite easy to scratch or splinter them when they are removed. And once they are off, you have no proper place to store them. The only way is to stow one away in the boot and the other one behind the seats, although it is not the best solution.”

BELOW: Not a car for tall drivers! The Targa roof installation would appear to reduce the headroom. 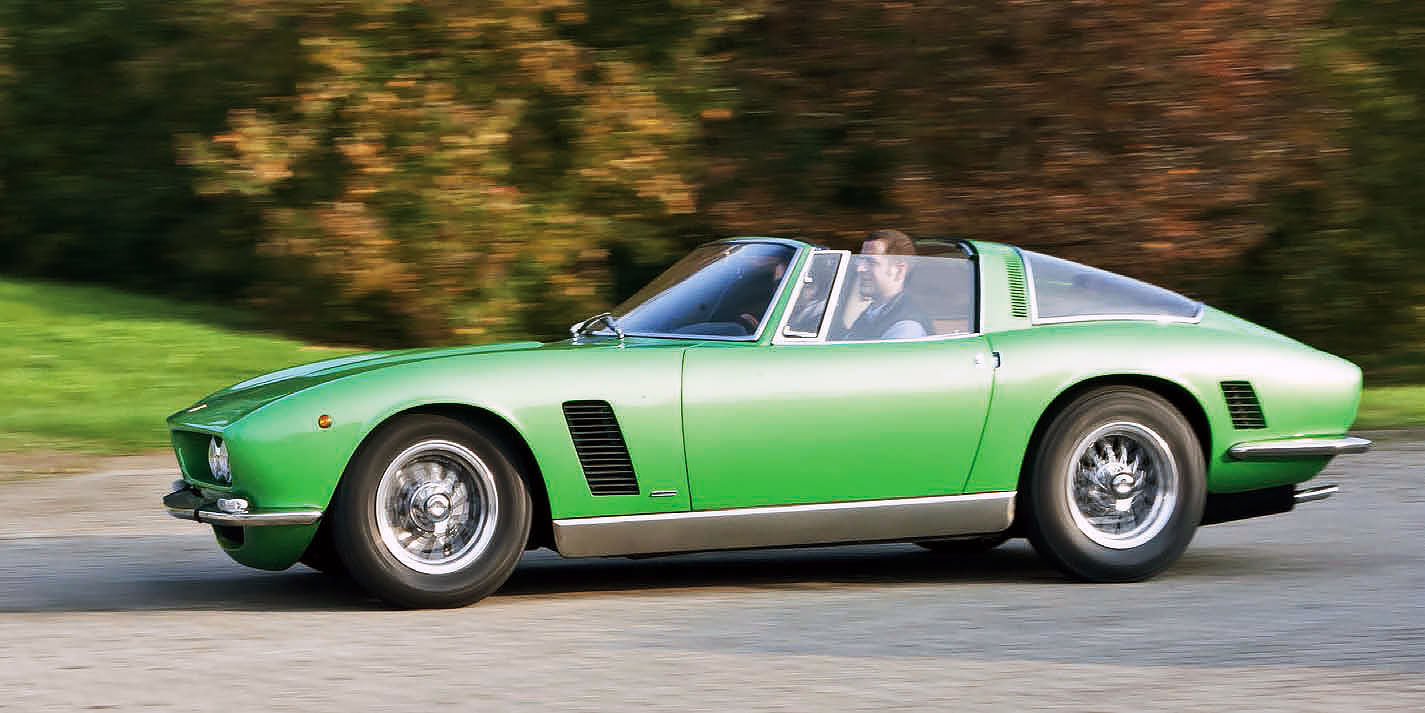