Alfa Romeo 1900 a review of the coachbuilt versions

Alfa Romeo Millenovecento. With over 50 coachbuilt versions built on the 1900 chassis, we consider the ‘fuoriserie’ phenomenon Story by Elvio Deganello. Photography by Archivo Deganello and Michael Ward.

In Italian the word carrozzeria defines what the British call bodywork, but also indicates a company that builds or repairs the body, ie a coachbuilder. Some of the carrozzerie like Bertone, Pininfarina, Ghia, Vignale and Zagato have become famous in the world of Italian style.

The phenomenon of ‘fuoriserie’ (meaning custom made, ie special bodies not built in series) has been very important in Italy. However, many Italians have overlooked the importance of this specialist activity, while abroad the knowledge and understanding is limited except, of course, to Auto Italia readers. In Italy in the 1950s there were about 60 bodyshops in operation. In total they built more than 3000 bodies each year. The flourish of work undertaken by the coachbuilders and the success of their fuoriserie was born by four main factors.

Firstly, after WWII, large manufacturers had to first restore the bomb damaged plant and adapt production to cope with strong demand. As a result they concentrated their efforts on a few standard models. In this way refinishers were able to benefit from a free market for their special versions of coupe, roadster, convertible, limousines and commercial vehicles. Secondly, the cost of labour in Italy up to the 1960s was quite low, so a car with a special body could be sold at a price just slightly higher than that of the standard model.

Thirdly, often the major manufacturers commissioned the coachbuilders to produce some models for their specialist ranges, such as the Giulietta Sprint entrusted by Alfa Romeo to Bertone, and the Lancia Aurelia B20 GT and Fiat 1100 TV convertible entrusted to Pinin Farina.

Finally, the exceptional abilities of the coachbuilders and Italian designers created technological and stylistic innovations with a vitality that had never been seen before.

To understand the importance and extent of the phenomenon of Italian carrozzeria we will consider, for example, the Alfa Romeo 1900. While Alfa Romeo took full advantage to maximise its assembly lines to build rigid sedans, it entrusted special versions to the coachbuilders. The company gave complete freedom to car designers to adopt the style they wanted, with only one requirement to maintain the classic three section grille for obvious reasons of family recognition. However, some refinishers ignored this request with results that were often disappointing. For example Franco Scaglione, designer at Bertone, pulled up the side lobes of the grille to pursue his idea of a face down look, but did not produce a better effect than the original. Carrozzeria Colli also tilted the grille side lobes upwards, lowered the lights and created a funny frowning clown in front of a coupe that had the high tail and cut sheets as plentiful as the pants of the childrens’ entertainer.

Other amusing examples were the Astral spider by Boneschi, the company that specialised in advertising vehicles realised by Rafael Trujillo, dictator of the Dominican Republic, and exercised its wicked wit by making a mobile toothpaste tube. The Oscar for seriously impractical creations must go the 1900 beach car made for Ghia-Aigle by Giovanni Michelotti. It was without doors, without a hood and without a boot, it could be used only in summer by athletes fit enough to climb over the side to enter the vehicle. Other extreme 1900 designs included bodywork that emulated the lines of jet aircraft, but these creations did seem to be appropriate in the 1950s taking into account that during this period ‘jet’ technology was revolutionising flight. 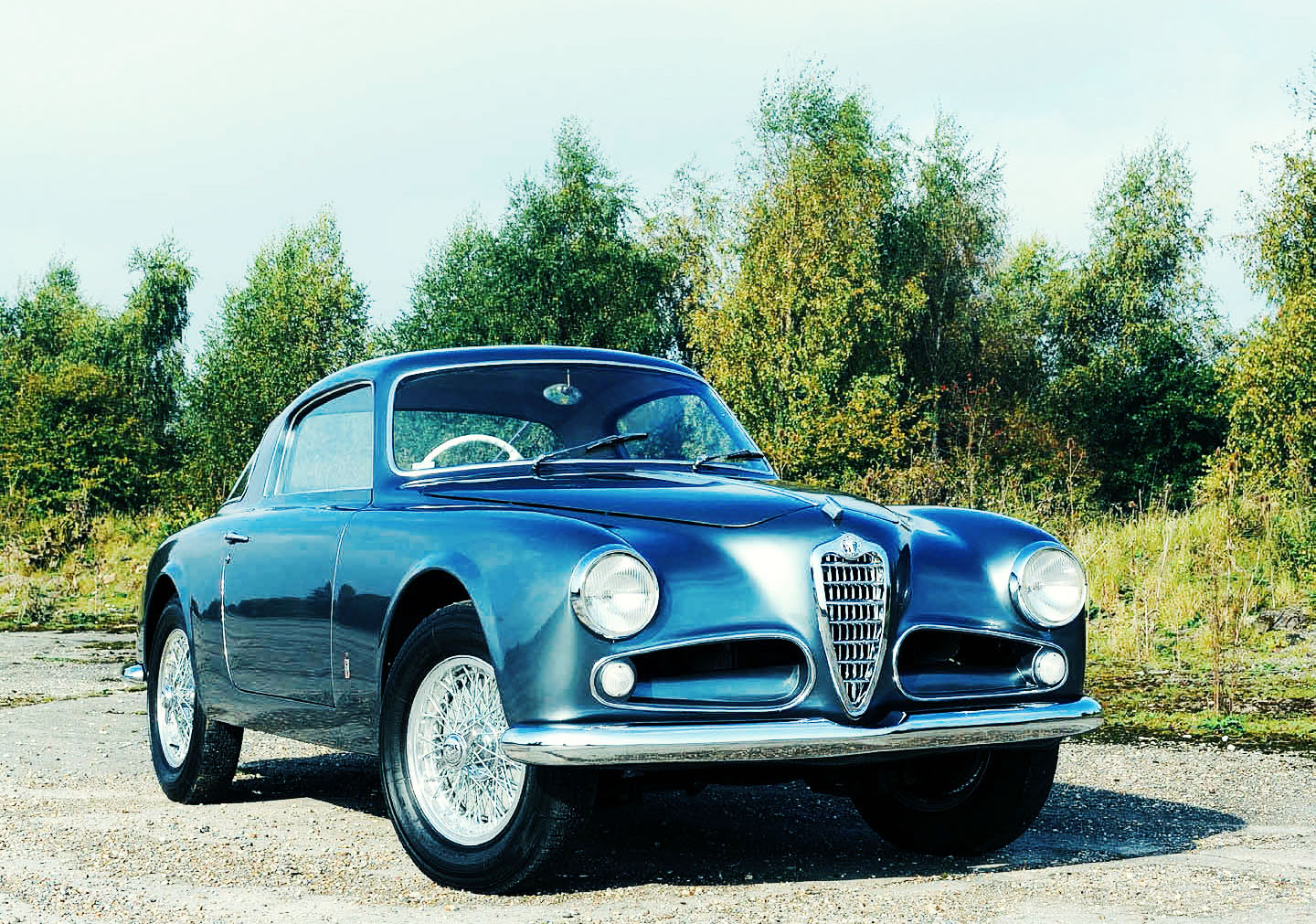 Among the more fanciful assumptions made by coachbuilders producing aircraft inspired lines on the frame of the 1900, there is the Supersonic designed in 1953 by Giovanni Savonuzzi for Ghia. It had a transparent ‘cockpit’, fins on the wings and false jet nozzles forming the taillights. In 1954 Savonuzzi returned to aeronautical suggestions with a 1900 Ghia coupe that had headlight casings mimicking a jet air intake, wings and a ‘fuselage’ supporting the roof. Vignale penned the same theme with a drawing by Michelotti of a coupe that had fake pitot tubes in the sides and had ‘bomb’ warheads in the radiator grille and bumpers.

Also partly inspired by aircraft, apparently, were the BAT series designed between 1953 and 1955 by the restless spirit of Franco Scaglione for Carrozzeria Bertone. The acronym BAT means ‘Berlinetta Aerodinamica Tecnica’, and the designs were the result of critical aerodynamic research done by gluing pieces of wool to the body to analyse streams of moving air. The value of Scaglione and Bertone’s efforts is not just in identifying the means for the investigation of air flow, but in having embraced these technical issues when most manufacturers and coachbuilders completely ignored the laws of aerodynamics.

In returning to the more utility versions of ‘working’ 1900s, there were the ambulances and stretched sedans by Colli, the estates by Ghia, armoured saloons and cabriolets for the police. These vehicles had all originated from studies by Alfa Romeo and were based more on practical aspects rather than aesthetics. However, one design that escaped attention was an Alfa Romeo 1900 ‘sportwagon’ to complement the range of berlinas. 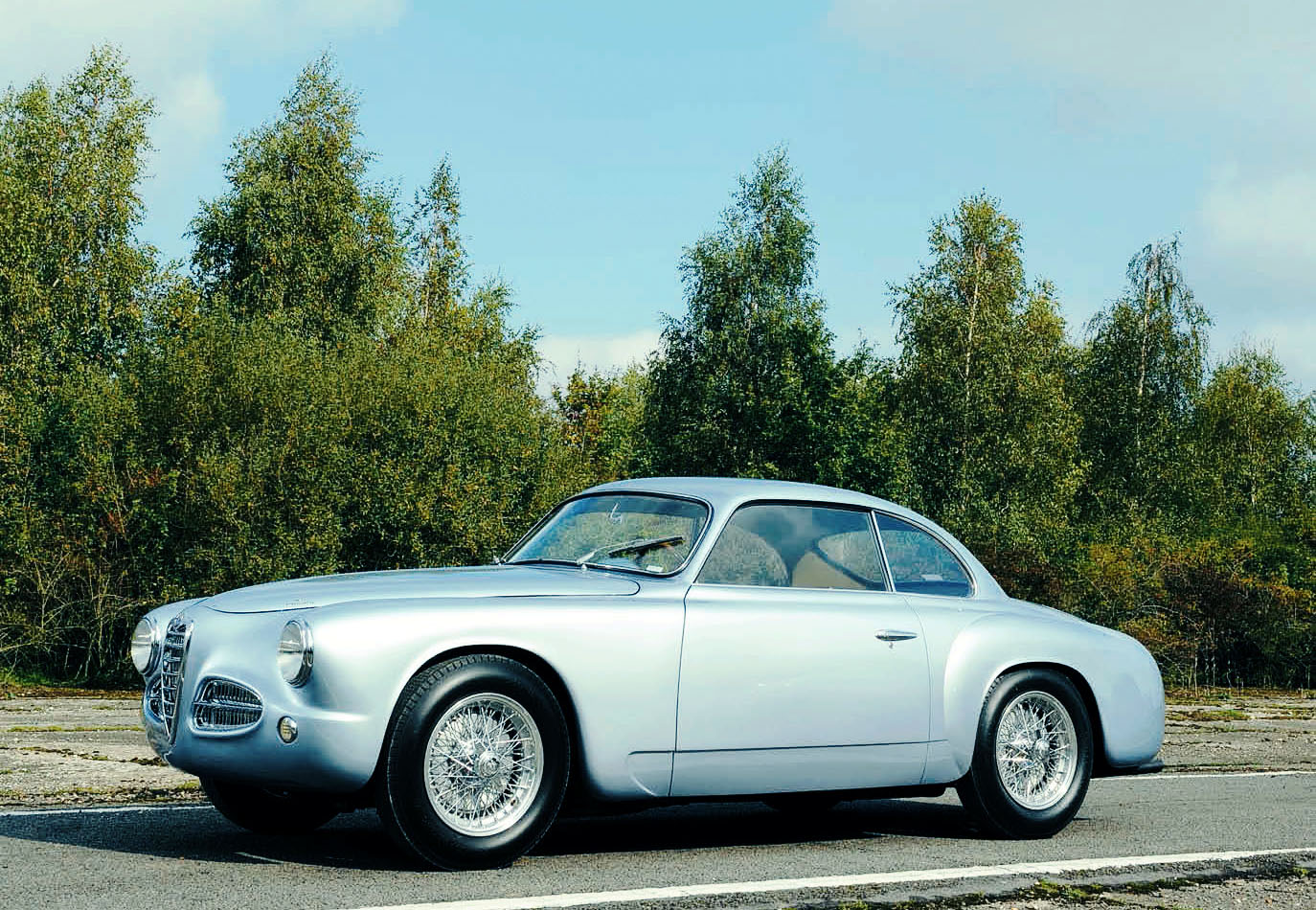 With the approval of Alfa Romeo, Touring studied and then created the 1900 Coupe Sprint in 1951/1953, and the Coupe Super Sprint in 1953/1956, by developing and modernising the style of the Alfa Romeo 2500 SS Villa d’Este of 1948. Touring had adopted and patented the Superleggera system, which consisted of a structure of small diameter tubes to support the body’s shape consisting of thin alloy panels attached to cover and strengthen the framework. Besides being lightweight, the Superleggera construction system gave great flexibility, allowing Touring to quickly construct innovative body shapes and in doing so was able to create open cars simply by removing the coupe roof without the need for extra reinforcement. Among the true coachbuilt 1900s were the offerings by Boano of its series 1 and 2 Coupes in 1956. There are design elements in the Coupes that echo the Ferrari 250 GT, which was temporarily built in 1956- 1957 by Mario Boano because Pininfarina was building its new plant in Grugliasco. Clearly Boano failed to put his 1900 into production but we must recognise Boano who introduced some novelty while developing several different innovations starting from the same basic idea.

Some of Boano’s proposals proved to be so successful that Alfa Romeo considered them as competition with designs from Touring, when it decided to renew the Super Sprint for its catalogue in 1955. Touring eventually won the coupe contract, but Boano won the commission to design and build the Primavera, the two-door coupe version intended for series production. However, the best body by Boano on the 1900 chassis was the cabriolet designed by Michelotti, with a style that five years later inspired the Triumph Italia built by Vignale. Among the 1900s that made their mark in style was the 1954 Ghia Gioiello (jewel) and Supergioiello, which had the headlights mounted inside the full width vents and indicators on the leading edge of the front wings. This design feature, with some modifications, was applied to the Giulia Sprint GT.

The grille treatment of the 1953 1900 Boneschi Gazelle was an inspiration for the Alfa Romeo 102 series 2000 berlina, which was launched in 1958. The 2000 also borrowed from the panoramic windscreen and taut lines of the stunning compact coupe designed by Michelotti for Ghia-Aigle in 1959. Although Michelotti’s design was not adopted it was notable for its balance.

It was Pinin Farina that set the scene in 1955 with its agile coupe that previewed the roof line of the forthcoming Giulietta Sprint. The shape of the bonnet and large grille air intakes made the outdated mechanics look less obvious.

Among the notable classically styled fuoriserie were the voluminous Castagna 1900 Coupe, the 1900 Perla by Bertone, the 4-seater Pininfarina coupe and the Stabilimenti Farina and Pinin Farina cabriolets. Although they were all different these models have in common the 1900 appearance that suggests larger displacement engines.

Not to be left out of the flurry of 1900 activity, Abarth commissioned Ghia to build its 2000 Coupe on a lowered chassis. The striking two-tone bodywork was perhaps too wide for the frame. A 1900 Abarth was also built by Ghia on the same stylistic structure but on the standard chassis. Evidently some bodybuilders, supported by their customers, had a more traditional approach, which attached great importance to size. They completely ignored the fact that the 1900 could be compact and agile, and established new aesthetic and functional parameters, which cancelled out the old belief that large meant luxury and performance. 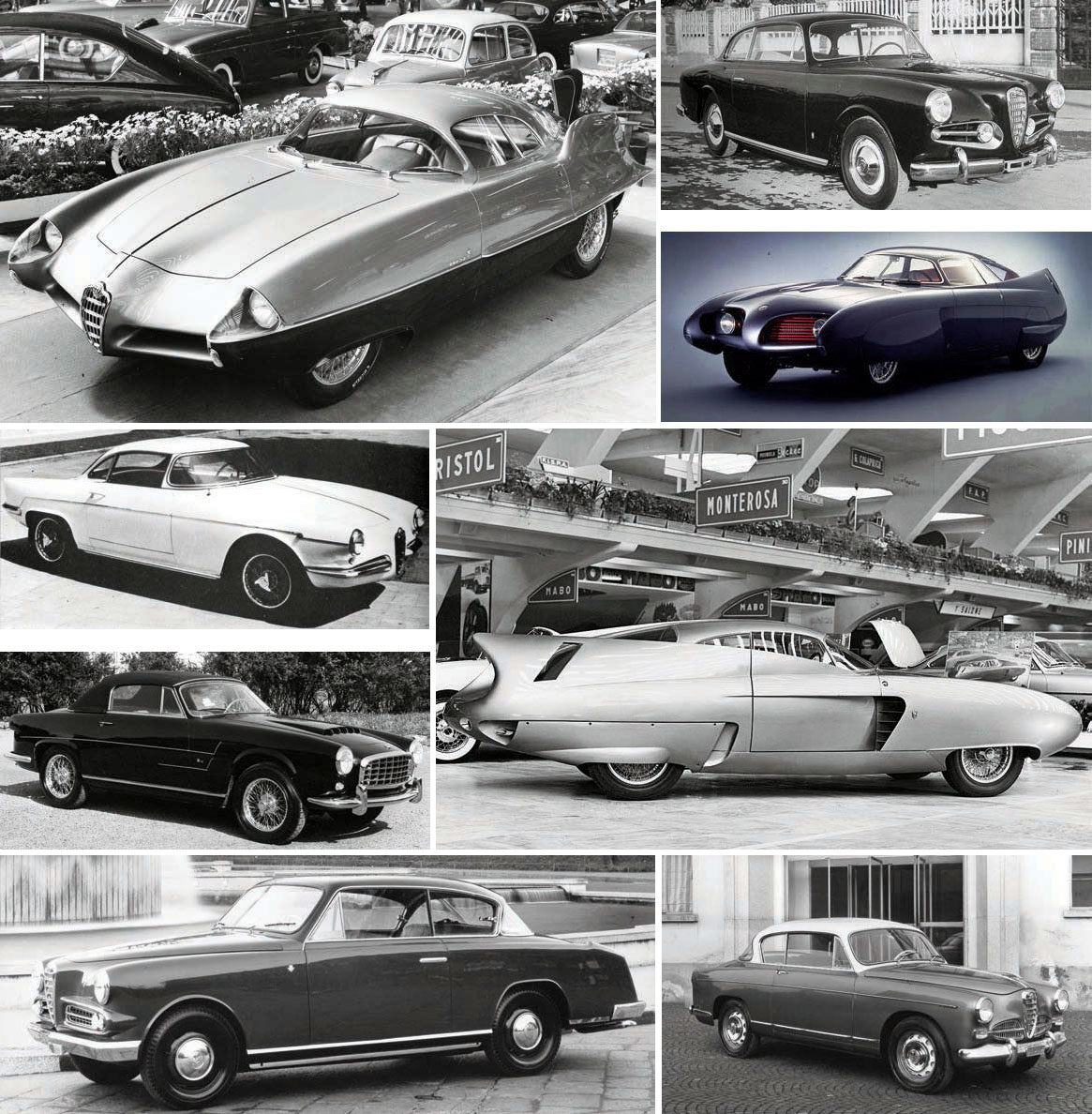 Among the creations that best grasped the agile spirit of the 1900 are the coupes by Pininfarina and Zagato. Pininfarina’s design was an alternative to the Touring Coupe, retaining (except the roof) the same mass distribution, while Zagato’s coupe was similar to the Fiat 8V Z, but was distinguished by the radiator grille and the lobes extended forward and blended into the front wings. Zagato also made a spider in 1957 with a similar frontal appearance but with a tail like Pininfarina’s Lancia B24. This interesting proposal was not followed up by series production. The same fate befell Boneschi’s Dea (Goddess) cabriolet, the Touring Spider and Vignale’s La fleche cabriolet designed by Michelotti. We have described about 50 bodies built on the Alfa Romeo 1900 chassis, but without taking into consideration the one-off variants proposed by coachbuilders or the demands by customers to make their own unique and different fuoriserie. 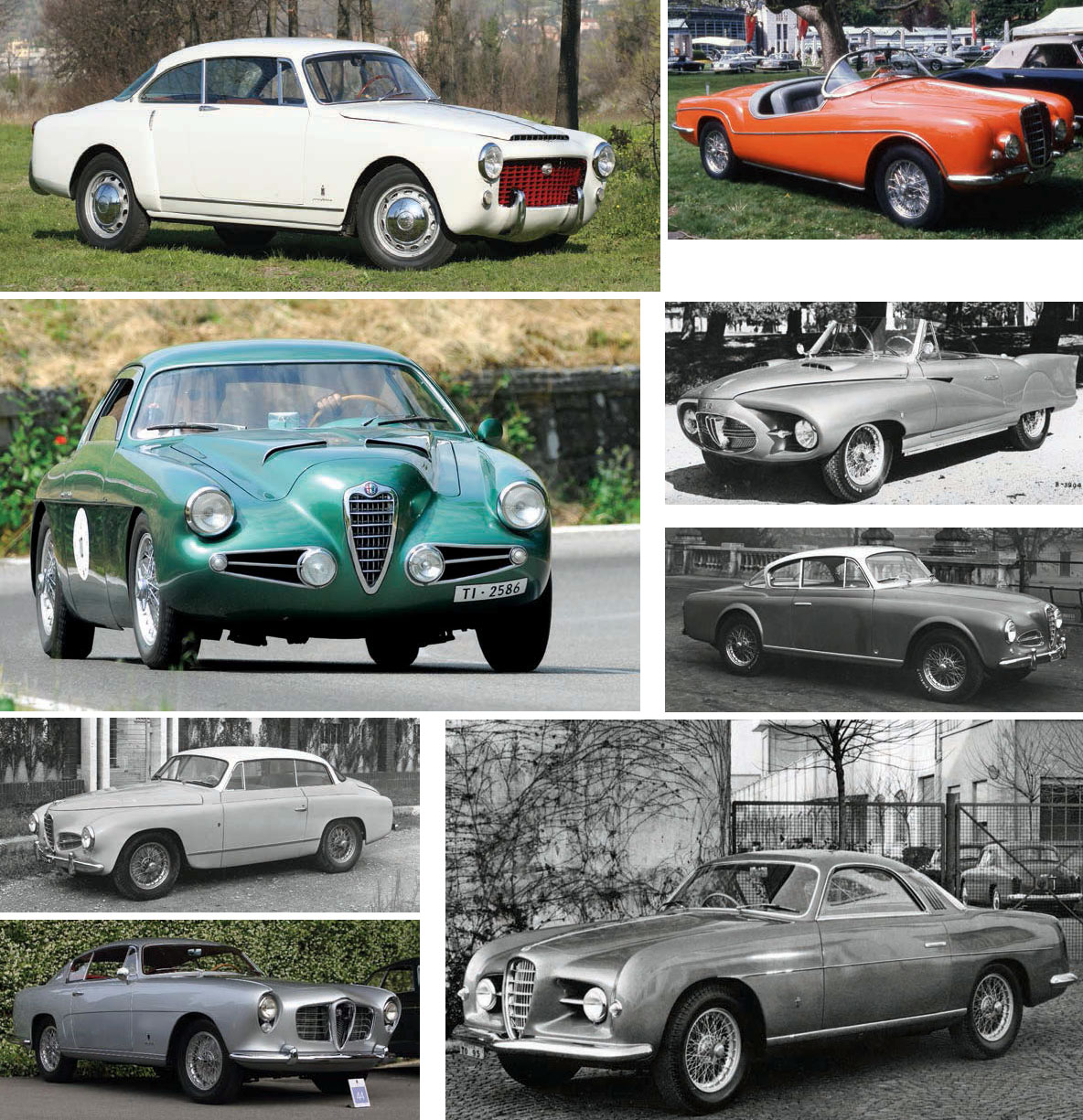 The Alfa Romeo 1900 story gives the reader some idea of how the model provided a comprehensive and vital contribution by the coachbuilders to the story of Italian design in those unforgettable years of evolution.

1: Shades of Lancia B24? Sadly the pretty 1900 SS Zagato Spider never made it to production

ABOVE: A fine example of a restored 1953 1900 CS Series 1 Pinin Farina Coupe offered by JD Classics.