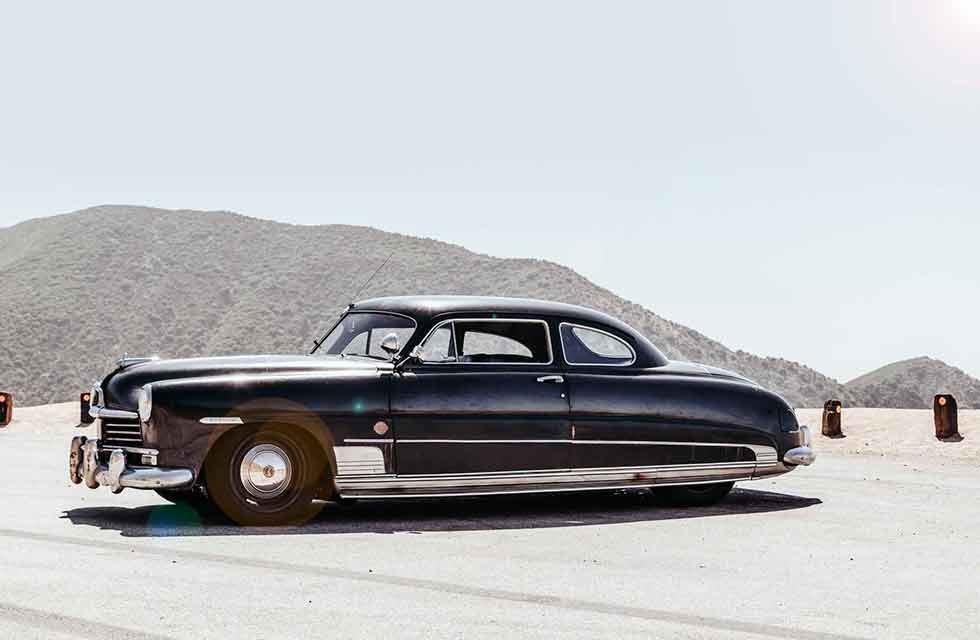 Meet the latest ‘Derelict’ creation from ICON, this stunning noiresque 1949 Hudson, arguably one of the most innovative shapes of its time and a car that wouldn’t look out of place in the LA ‘film noir’, China Town… Words: Huw Evans. Photography: Icon.

Icon, the Los Angeles-based builder of recreated first-generation Ford Broncos and a whole slew of iconic classics, has done it again, this time with another stunning example from its ‘Derelict’ line – a reimagined 1949 Hudson Super Club Coupe. Before we delve into the details of this latest build, let’s start with a little history lesson. When looking back to Detroit’s golden age, Hudson was arguably one of the most successful of the American independent automakers. In the early and mid-20th century it carved itself a niche in the upper-middle price segment, delivering a range of cars and options that were right for the market.

Arguably Hudson’s biggest achievement however was in 1948, when it introduced the revolutionary ‘step-down’ design – so called because they allowed the driver and passengers to essentially sit ‘down’ in the vehicle between the frame rails due to a lower floorpan, semi-unibody design. This enabled a sleek, low roofline and low centre of gravity, resulting in one of the best-handling Detroit cars of the era.

Styling was up-to-the-minute and modern, with sleek, flowing contours and fully integrated rear fenders, performed under the direction of chief stylist Frank Spring. Hudson offered Super and Commodore models with either inline six or eight-cylinder engines for 1948.

The Six was a 262 cubic inch version rated at 121bhp, while the eight was a 254 cubic inch engine, rated at just fractionally more power – 128hp. Body styles comprised of Business Coupe (Super only), Club Coupe, four-door sedan and Brougham convertible.

The following year, in which this particular example was built, Hudson added an eight- cylinder option to the Super Brougham but even bigger news was a jump in production, from 117,000 units to a whopping 159,000. The ‘step down’ design would last through 1954, achieving its crowning glory in 1951 with the introduction of the fabulous Hudson Hornet, a hot rod version of the Commodore, which featured a 308 cubic inch high compression (7.2:1) inline six and Twin H-Power carburettors. It made Hudson the dominant force in the then burgeoning stock car automobile racing series but that’s a story for another time.

Getting back to our feature car, this particular 1949 Super Club Coupe was found in a barn in North Carolina. From the outset, the idea was to reimagine the 70-year-old Hudson as a highly capable daily driver with a dose of ‘rockabilly attitude’. ICON’s Jonathan Ward said when he found the car on Craigslist, he didn’t even have a client for it. He just fell in love with the car and knew he had to buy it. Pretty soon, however, one of ICON’s existing clients showed a strong interest and a plan was hatched to build the Hudson into a modern-day cruiser with ICON’s distinctive touches.

Cosmetically, the car looks like an old Hudson that’s still on the road and has weathered seven decades of use. Of course, that’s the point. Look closer, however, and you start to see just how much thought went into this one-of-a-kind build. On the outside, the car retains its original patina and weathered chrome, but features modern H4 headlights and upgraded tail-lights, reverse light and spot lights utilising the original housings. The car rides on 18-inch ICON forged wheels shod in staggered Goodyear RS-A rubber, with the original 1949 Hudson centre caps.

Behind the traditional-looking alloy wheels is an example of ICON’s Brembo GT four-wheel-disc braking system, with six-piston calipers at the front and four-piston units out back. A Wilwood master cylinder with PSC remote reservoir and a Hydratech hydro-boost were installed to deliver fast, responsive braking.

“YOU COULD SAY THIS HUDSON IS PERHAPS THE ULTIMATE DAILY DRIVER, A ROLLING PIECE OF ART THAT’S EVEN MORE IMPACTFUL TODAY THAN IT WAS IN 1949…”

The anchors are connected to a four-wheel independent suspension and Art Morrison chassis which, due to the Hudson’s step-down design, is a truly unique piece of engineering.

The strong Dana 60 third member is essential, given that this Hudson now features a supercharged LS9 GM small block and built 4L85-E four-speed automatic transmission. Rated at 638bhp and 604ft-lb of torque in sixth-generation Corvette ZR-1 trim, the LS9 is a powerful engine and even in a heavy sled like this Hudson, will smoke the tyres all day long. Ward and his team have run the car on the chassis dyno and with 478bhp and 457ft-lb of torque to the wheels – the amount of grunt available truly belies this Hudson’s exterior appearance – it’s a sleeper in every sense of the word. Other clever mechanical touches include an ARE dry-sump oiling system for the LS9 engine and a custom built stainless-steel fuel tank with full EVAP system that enables modern petrol pump compatibility while still utilising the Hudson’s original fuel filler door.

There’s also an electric parking brake, Setrab heat exchangers for the steering, transmission and engine supercharger, a Griffin aluminium radiator to keep things cool, plus a relocated A/C compressor from Speartech that’s hooked up to a Vintage Air system to keep the cabin cool on hot days.

Inside, the attention to detail follows in ICON tradition. Original gauge faces are retained, but the wiring and mechanics are thoroughly modern. The body and forward wiring harnesses are completely custom-made for this car while an Eaton Bussmann electrical fuse block keeps the system safe and easily accessible. Other creature comforts include a tilt steering column with a newly cast 16-inch steering wheel in translucent blue (replete with the original Hudson brightwork) plus a hidden audio controller; Moore & Giles leather trimmed upholstery with hand dyed wild alligator touches along with German wool carpeting and a wool headliner.

Ward and his team acknowledge that the Hudson was very much a labour of love but seeing the finished car you can clearly understand how that time and diligence has really paid off. Iconic appearance, modern reliability with plenty of power and comfort, you could say this step down Hudson is perhaps the ultimate daily driver, a rolling piece of art that’s even more impactful today than it was in 1949…

“COSMETICALLY, THE CAR LOOKS LIKE AN OLD HUDSON THAT’S STILL ON THE ROAD AND HAS WEATHERED SEVEN DECADES OF USE. OF COURSE, THAT’S THE POINT…”