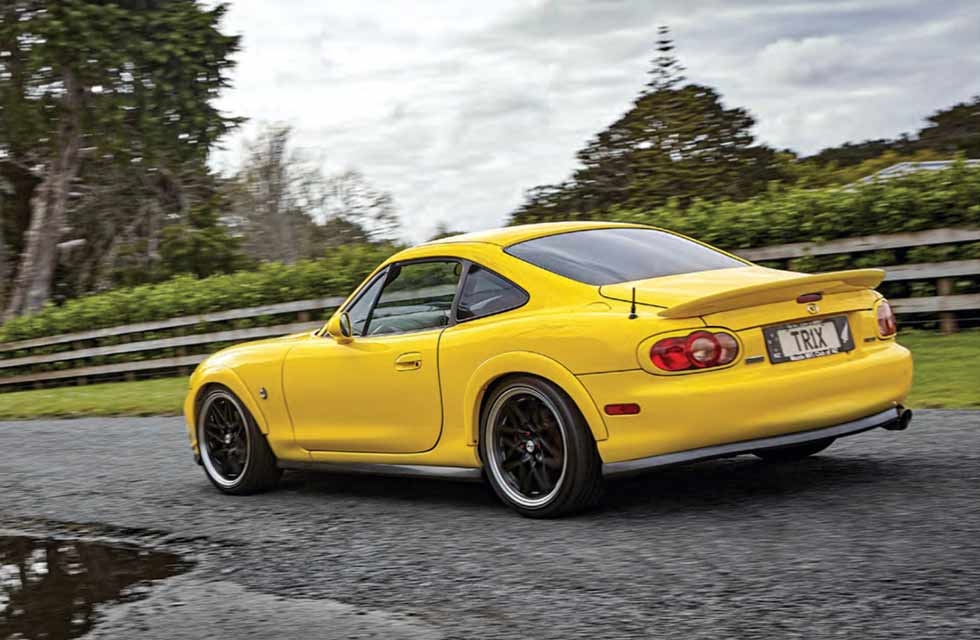 Mazda has made an awful lot of cars but one little beaut y stands head and shoulders above the others . Words: Terry Cobham. Photos: Jared Clark.

A MAZDA WITH A DIFFERENCE

You could argue the MX-5 is a very successful product. In fact, if one were to park every MX-5 manufactured since production began in 1989 nose to tail along State Highway 1 starting at Cape Reinga, that line would stretch to Bluff, back to Cape Reinga, and south again as far as somewhere in the forest between Tokoroa and Taupo. At the rate it is still selling 30 years after its launch, the line would soon reach Taupo — quite some achievement for a car that almost wasn’t. No other manufacturer of any sports car has come anywhere close to that.

The car was inspired by the Lotus Elan, and by reliable estimates a credible 12,220 of those were produced. It’s interesting to note that Lotus’s official figures are somewhat below that number; you can invent your own reasons for that. The Elan was produced between 1962 and 1973, and Colin Chapman never intended it to be a racing car; instead, it was to be, “a touring car not intended for racing”.

This is an A-spec car, the nearest Mazda built to a racing model. The extra work added less than 20kg to the model’s overall weight

Once upon a time

In the mid ’70s, an American motoring journalist in conversation with Mazda’s head of research and development voiced the opinion that Mazda should investigate the market potential for a simple, classically British-style sports car. By that stage, anything resembling that had passed into history. The Triumph Spitfire had disappeared a decade earlier, MGBs were gone, and so was the TR7, but the sense was that the appetite for this type of car hadn’t completely deserted the marketplace.

Some years later, the same two gentlemen met again but by now both had moved further up the food chain, in fact the journalist was even working for Mazda. After further consultation and time, the idea was approved in 1983 and development work began. There was a competition between the Mazda design teams in Tokyo and in California to develop a feasible design.

By the middle of the decade, the California proposition had been selected and at that stage it was proposed to offer both hardtop and convertible versions of the car. The development model was thus code-named ‘Duo 101’. From the beginning of the styling process, it was very obvious that the California design team had taken the idea to base its new car on the classical British sports car very directly and the new Mazda was inspired. Inspired by the Lotus Elan that is, as the car really looked as if Long Lost Family had found the Elan’s baby sibling.

The very first of these Mazda MX-5s was built in England by a specialist prototype builder and used many production parts from the Mazda Familia and other Mazdas. The car was then taken to the US for testing and market evaluation.

A little car was delivered

In early 1986, after this testing phase in Southern California, and especially after plenty of positive reactions to the styling, Mazda head office gave the OK for production development to proceed. In 1989, not even four years later, the now named ‘MX-5’ was launched. The idea of a lightweight, compact, and fun-to-drive sports car had been totally respected. The market and the critics loved it.

In Japan it was branded ‘Eunos’ and sold as the ‘Roadster’. This was when Mazda and other manufacturers were experimenting with the creation of their own luxury brands, such as Toyota with Lexus. In the US, the model was sold as the ‘Miata’, and elsewhere it was branded as the ‘MX-5’.

It was small and excitable

The cockpit had room for two adults, the engine was positioned behind the line of the front axle to achieve a 50:50 weight distribution, and the four wheels were all attached by wishbone or multi-link suspension to provide the now famous MX-5 road manners.

Back in 1989, the five-speed manual transmission was taken from an existing Mazda model and, as anyone who has ever driven an MX-5 will know, the ultra-short and usable shift linkages are a very enjoyable part of the driving experience.

The motor was lively, but to this day Mazda has (mostly) resisted the urge to turbocharge it or increase the output beyond that which 30 years of engine design have given it. Mazda has kept the fun factor strong by making a car with almost impeccable and predictable road manners, a very sweet to use gearbox; great brakes; and today, as in 1989, a very lively but not overly powerful motor.

In 1989, the car came with a double-overhead- cam four-cylinder 1.6-litre injected motor, although by 1993 a 1.8-litre option had joined the range. At that stage, power output ranged from 86kW to 98kW. Today, the engine options have not changed dramatically. The smaller of the two engines, a 1.5-litre, delivers 96kW, and the two-litre delivers a still not massive 135kW.

Individuals have repowered their MX-5s, but within the borders of the original intention of this car, Mazda has resisted all temptation to turn these cars into overpowered monsters.

The car then became a thing of beauty

Between 1989 and today, Mazda has updated the design, the biggest visual change being the elimination of the pop-up headlights that were a part of the first-generation NA’s look. This was due to the US safety laws, which deemed the pop-up lights to represent potential injuries to pedestrians. One could easily argue that the car is prettier without them anyway, and certainly it has a better drag coefficient. Put the first and latest models side by side and the changes are very evident, but this has been across four generations of the car.

The owner of our feature car is quite a collector of MX-5s and has recently sold his version of an over-powered MX-5. This was an NC model, which were manufactured over 2005-2015, with a late-model LS3 6.2-litre V8 no less.

In 2004, a Mazda speed turbo version was released, the only time Mazda was tempted to do this, and it was limited to 350 units. Depending on who you speak to, this was either an unsuccessful or a successful addition to the line-up. It came with stiffer suspension and wider tyres to handle the increased power. Mazda Australia also briefly offered a turbocharged version. About 100 of those were produced, and today they have become sought-after collection models.

Look at this one

The Lightning Yellow car featured here is an even more rare creature. Mazda decided at the tail end of the NB model’s production run to make something a little bit more memorable out of the MX-5. It pulled convertible models from the production line and sent them through another process whereby senior builders at Mazda grafted the coupé pieces onto them. Three different versions of these were made, labelled the Type S, Type E, and Type A; just under 200 of them were produced.

This is an A-spec car, the nearest Mazda built to a racing model. The extra work added less than 20kg to the model’s overall weight. It benefits from a stiffer construction, thanks to the coupé style of new quarters, roof, and boot. According to the owner, Frank Willett, the car handles even better than the convertible or hardtop of the similar model. This is number 12 of only 40 built to the spec. The other two coupé specifications made up the total of this body shape produced by Mazda.

Frank knew of the model and had been on the lookout for just such a car for some time. He saw this one advertised in Japan and sight unseen placed a bid that purchased the car. Frank heads up a business called ‘Autohub’, which specializes in door-to-door delivery for imported cars. This time, as the client, he was pleased when his car arrived as scheduled but was even more thrilled with the condition of the car. No back history was available, but he believes it had only one or possibly two previous owners.

“A cut and polish brought it back to almost new,” he says.

Frank has reupholstered the seats and fitted some new wheels. Apart from that, the car is as he purchased it.

This car is so rare that when Frank told one of his American business suppliers, a specialist for Mazda parts, that he had an NB coupé, this person explained to Frank that Mazda had never made such a car. Once he understood that it really was a Mazda model, and had seen a photograph, he immediately made an offer to buy the car — an offer Frank hopes he won’t ever regret refusing, although he is confident the value is going in only one direction. Frank is aware of the car’s rising value and the intrinsic interest in such a rare Mazda, so chooses to protect it from the potential wear and tear liable from too much use on our roads, although it doesn’t really live in the giant toy packaging in which it was displayed to the crowds at the 2019 Ellerslie Classic Car Show.

The brilliant little car that began as the MX-5 back in 1989 is to this day a brilliant little car. The Lotus Elan weighed in at just over 680kg. The MX-5 is heavier than that, but at 1030kg still doesn’t need to subscribe to Jenny Craig. Thirty years after its introduction, the MX-5 is still storming along. Well over one million MX-5s have now been produced, so they are almost as common as Morris Minors once were, and they have already taken their place in the growing list of classics.

The Lightning Yellow car featured here is an even more rare creature. Mazda decided at the tail end of the NB model’s production run to make something a little bit more memorable out of the MX-5

The idea of a lightweight, compact, and fun-to-drive sports car had been totally respected. The market and the critics loved it

From the beginning of the styling process, it was very obvious that the California design team had taken the idea to base its new car on the classical British sports car very directly and the new Mazda was inspired. Inspired by the Lotus Elan that is