How to modify Rover P6

The Rover P6 enjoys the honour of having been the first ever European Car of the Year back in 1964, and it’s hardly surprising that over 320,000 of them were sold in its 1963-1977 production run. Rover had cannily identified a niche between the sort of big swanky saloons that came with fancy trim and torquey 3-litre engines, and the more family-oriented 1.5-litre budget saloons, and found immediate success with the P6-generation Rover 2000. It was a pretty advanced thing for the early-’60s too, with disc brakes all round, rear de Dion suspension, and full-synchromesh transmission – it effectively invented the notion of the affordable executive car, and it was jolly good at what it did. 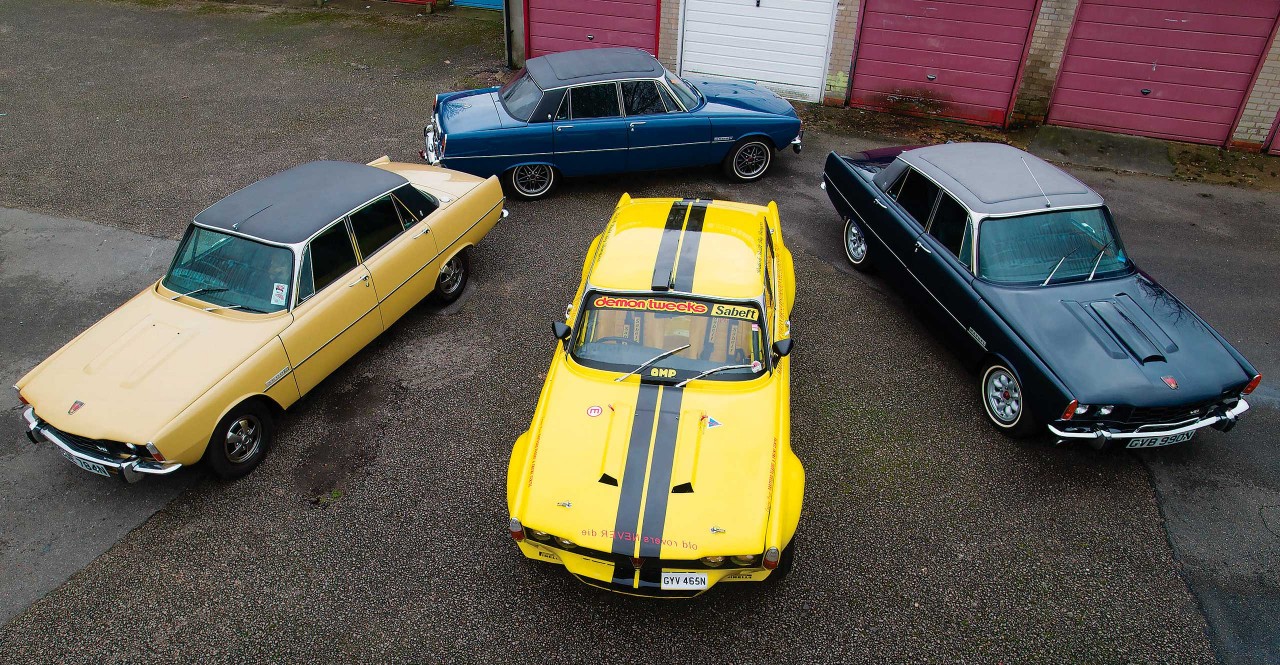 The Series II, launched in 1970, is identifiable by changes to the bonnet, front grille and rear lights, among much else; the battery was relocated to the boot, there were new gauges and switchgear inside, and the 2000 was replaced by the 2200 SC and TC – its 2.2-litre engine’s capacity increased to improve torque and thus efficiency.

As you’d expect from this troubled manufacturer, the P6 was officially built by The Rover Co Ltd from 1963-67, Leyland Motors from 1967-1968, and then British Leyland from 1968-1977… but that’s all just politics. Every one of these handsome and stately machines was hammered together in Solihull by gruff folk with oily fingernails.

The 2000 and 2200 engines are tough old units. Their inherent robustness means they’re more than happy to take a few power mods and soak up the relentless abuse you’ll inevitably dole out, although don’t go thinking these engines are going to set your trousers on fire with excitement. Think of them more as a faithful sidekick with a penchant for mischief, like an eager Labrador or a particularly dependable budgie.

The 2000 motor was actually designed specifically for the P6, unusually for the time sporting an OHC configuration, with a fully flat cylinder head and combustion chambers cast into the piston crowns. In its initial guise it offered 104bhp. The TC featured a re-engineered top end and twin SU carbs along with a bigger starter motor, and gave 124bhp. The 2200 was introduced in 1973 principally to meet emissions regs in export markets (notably California); bore was increased but stroke remained unchanged, leading to a 10% displacement increase and better torque, although peak power actually fell: the singlecarb 2200 had 98bhp, the 2200 TC had 115bhp.

While it’s possible to coax a few extra horses from the single-carb motors, you’re better off swapping to TC spec as a starting point – although bear in mind that it’s not just a case of bolting on a pair of carbs, you’ll need the right head and manifolds too. Gas-flowing the head and optimising the carb jetting can get you up to around 130bhp with a TC. The 2200 head has larger valves and the 2200 block is stronger, so these are the ideal ingredients to use if possible. And Rover did supposedly test a Shorrock supercharger setup in the mid-1960s, which we think sounds like an excellent route to more power with a four-cylinder P6.

And of course, there’s always the V8 in the range to play with. The tuning possibilities of the Rover V8 are enough to fill this entire magazine, so we’ll just leave this idea here: 4-litre TVR-spec, stainless manifolds with open pipes, ported heads, forged pistons, fast-road cam, standalone management – that’d see you up to about 240bhp. More than enough for mischief.

While there’s a lot that can be done to the ubiquitous Rover V8, there’s also a lot to be said for swapping in the eminently tunable small-block Chevy V8. If you throw in a 350ci SBC, you’ll find yourself with a whole world of versatility and easy aftermarket parts availability; bolt on a Quadrajet carb and manifold, insert forged rods, flat-top pistons and a mild cam, add some Vortec heads, and you’ve got a reasonably unstressed 300bhp. It’ll make an amusingly un-Rover-like noise too. And there’s a variety of manual ’boxes that’ll work with an SBC – the Sierra Cosworth BorgWarner T5, for example, can easily be persuaded to mate up with your Rover running gear.

While we love the idea of shoving V8s in things, the the P6’s engine bay may be a little too narrow for most modern V8s with DOHC heads. So how’s this for an oblique alternative? The VAG VR6. While it’s not a true vee-engine (just the one cylinder head, see – it’s more of an alternately-canted straight-six than an actual V6), it is relatively compact, hugely tunable, easy to find parts for, reasonably inexpensive, and it makes an excellent noise.

With a 2.8-litre displacement (or 2.9, if you pinch it from a Corrado), all you need is a Schrick manifold, ITG induction kit and Milltek exhaust to have some fun. These engines also really like to be turbocharged.

You’ll need to bolt a whole lot of Volkswagen under the car to get it all fitted though – best off buying an entire donor car and pilfering everything you need. (The VR6 is best suited to front-wheel-drive applications too – this conversion would really set the cat among the pigeons.)

Okay, so it may be tricky to squeeze a modern DOHC V8 into a P6’s engine bay, but you’ve presumably got a mallet or two in the garage, so there’s nothing to stop you smashing things into shape. Where there’s a will, etc. The Lexus 1UZ-FE is an engine we keep coming back to as it’s just such darned good value – an aluminium 4-litre bruiser, found very cheaply in scrap LS400s. (You can get a decent running LS400 for £1500, so a sorry example should be chicken feed.) In a stock state of tune you’d get 250bhp, the native automatic gearbox would very much suit the P6’s cruiser character, and if you felt the need for more grunt there’s a world of tuning options.

Buy a cheap donor LS400 and use all the electronics from it. Simples.

Rover has form with gas turbines. JET1, built in 1949, once held the world speed record for gas turbine-powered cars, and the Rover-BRM race car of the 1960s ran at Le Mans for three consecutive years. So it would be eminently appropriate to build a gas turbine powered P6, would it not?

Admittedly, this will not be easy. You’ll ideally be looking for an engine with a single centrifugal compressor, a single combustion chamber, and a free turbine driving the output shaft, separate from the turbine driving the compressor. Where might you find such a thing? Well, websites such as jetenginetrader. co.uk are a good place to start – it looks like a gas turbine should be around a couple of grand. And how do you fi t it to the car? We admit it, we don’t know – but if someone does it we’ll be round with a photographer in a shot.

P6 gearboxes were never that confidence-inspiring, even when they were new. It’s all thanks to the serpentine linkage, and it often means that first gear can become recalcitrant. Renew the bushes and just grit your teeth.

Don’t despair though, it’s not a hopeless situation! The later SD1 gearbox can be persuaded to go in there, which gives you an extra ratio and improvements to both acceleration and economy, which is a bit of a win-win. The Ford Sierra Type 9 five-speed gearbox is also an option, conversion kits are readily available. The V8 rear axle and 2200 clutch are the best options in terms of strength and durability.

The 2000 was very softly sprung; the 2200 and 3500 were a bit stiffer, but only relatively speaking – every P6 is going to be a bit wallowy-mattressy in stock form. Adjustable dampers are really the way to go to firm things up, and are available for very reasonable prices from the likes of Gaz or Spax. Policespec springs are good for adding a bit of robustness if you can find them. If you fancy fitting coilovers, be aware that the P6’s front end doesn’t allow you to stick the threaded end through the strut top and bolt the other end to the wishbone like you’d expect on other cars, so you’ll need to do some fettling and fabricating.

Don’t be surprised if your P6 has knackered rear brakes. The inboard setup is fiddly to work on and things are often neglected as a result. Lack of attention can lead to leaky calipers and a dodgy handbrake, and it doesn’t help that the rear axle likes to ooze oil all over the discs too. Best bet is to bite the bullet, steel yourself for some graft and get it all shipshape.

And while you’re in there, it’d be bonkers not to upgrade, wouldn’t it? Fitting 3500- spec brakes to 2000s and 2200s is a no-brainer, while some uprated EBC pads will add extra bite to any P6. At the front end, four-cylinder cars had either Dunlop or Girling two-pot calipers, while the V8s had Girling three-pots; in either case, Fosseway Performance are good people to talk to about an upgrade to lightweight aluminium calipers and vented discs.