FIRST AND LAST AND ALWAYS

When it comes to classic Ford ownership, there are two common themes that tend to prevail with feature car owners — a Ford from the classic era was usually their first car, and a Dad or other close relative was a big influence on that buying decision. You won’t be surprised to hear then, that Darren Hawksley is no exception to this.

“WHEN I TURNED 16 MY DAD BOUGHT ME A CAPRI TO DO UP READY FOR WHEN I PASSED MY TEST. I LOVED THAT CAR, AND DROVE IT EVERYWHERE” 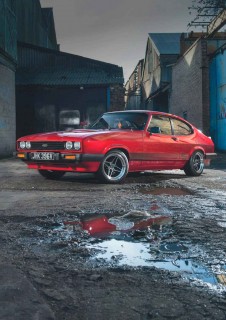 “I’ve been working on vehicles all my life, and you can blame my Dad for that,” grins Darren. “He loved his Fords, too, and when I turned 16 he bought me a Mk2 Capri 1.6 GL to do up ready for when I passed my driving test. I loved that car, and drove it around for quite a while before buying a shopper-spec Mk2 Escort, and then a Mk2 RS2000 in Diamond White.”

Then when he was 19, Darren decided to leave the old Fords — and the UK — behind to go a live and work in Australia for 15 years. “That was quite an experience,“ he remembers, “and of course, the cars are very different over there, too. I’ve been back in the UK for 14 years now, and about five years ago had a midlife crisis and bought a Porsche Boxster! I loved it, but the problem was all my mates were Words Simon Woolley Photos Adrian Brannan into the old Fords and the peer pressure become too much. So much so that I decided to sell the Porsche and buy another Capri.”

That was three years ago, and the Capri in question is the one you now see before you — though as you can guess, it’s undergone quite a transformation to get to the point where it’s looking as good as it does.

“Though my mate, Danny Thorne, I found out that Aaron Tucker of HT Racing was using the car for runs to the tip! It was completely standard and original, and looked a state with the underneath up to the bumpers covered in underseal. It needed a lot of love, but I could tell it was sound, and it was a genuine, early Mk3 2.0S too, so I begged Aaron to sell it to me.” With a deal done, and the Capri parked on Darren’s drive, he didn’t waste time starting on a stripdown and rebuild. “I was determined to get it done and back on the road as soon as possible,” he admits. “I knew that if I stalled, there was the risk that it would never get finished.” 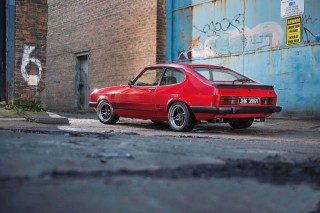 To this end, Darren spent at least 4 hours every day for the next three months comprehensively going through the car.

“I put my heart and soul into it,” he admits, “and it was done on a very tight budget. Fortunately, the shell was as good as I’d hoped — the floors and chassis were solid, but I needed to fabricate new sections for the rear three-quarters, the bottoms of the doors and some small repairs to the tips of the wings, too. Even now, all of the panels are the originals — confirmed to me at the Classic Ford Show when someone came up to the car and started running their fingers under the headlight panel!”

When it came to the paint, Darren’s rapid work progress almost came unstuck. “I got let down three times by painters and, running out of patience, decided to do it myself. I put a tent up in the garden and roped my next door neighbour, Pawel, in to help. I wasn’t that keen on the original Jupiter Red — I thought it was a bit dull — so after looking around at some more modern cars decided to go for Rouge Flamme, which is a Renault shade. It’s a three-stage paint, so applying it was a little more involved, and in fact the paint was probably the hardest paint of the rebuild — it was a real fight to do it outside. Worth it though, as when the sun’s out, it really pops.” 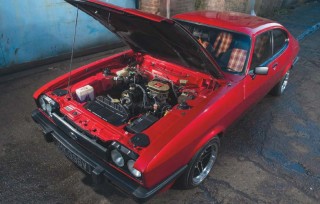 As a finishing touch, with the brighter red, Darren elected to fit a set of black S stripes and decals in place of the original grey — bought from DMB Graphics.

Darren hasn’t neglected the rest of the car either, though has left the majority of the running gear well alone, aside from stripping, cleaning and repainting. “The engine and gearbox have only done 70,000 miles and are in superb condition, so aside from a service, and adding the Burton Power cam cover and a K&N, I’ve left them well alone. I couldn’t have the suspension standard though, so I’ve lowered it 3 inches all-round using a combination of H&R springs up front and lowering blocks at the rear, adding some GAZ dampers, too.” For the wheels, again he decided a modern upgrade was in order, sorting a set of JBW’s 15 inch four-spokes in black, which work a treat, we reckon, while still keeping the essence of the S, so to speak.

Being an early Mk3, Darren’s 2.0S is what is known as a changeover car, which means it features many of the parts left over from the Mk2 production line, and that includes the interior. It still features the classic Carla check trim that the S cars are known for, but with Mk2 seats — seriously rare, but luckily for Darren in fantastic condition. “All I needed to do to the interior was give it a good hoover,” he grins. “I did need to replace one of the door handles, though, and that took me a year to find…”

So, with the Capri finished just how Darren wants it, and causing a bit of a stir (see boxout), has old Ford ownership got him out of his midlife crisis? “Yes, I won’t be tempted back into Porsche ownership,” he grins, “and while I keep being asked why I haven’t swapped the Pinto for something else, it’s staying put — it’s the original engine and I like it. I have got the classic Ford bug back big time though — I’ve been thinking a lot lately about doing buying a Mk2 as well, as a tribute to my first car — only with a Cosworth 24-valve this time. Done up in the classic JPS livery, I reckon it’ll look and sound the business…” 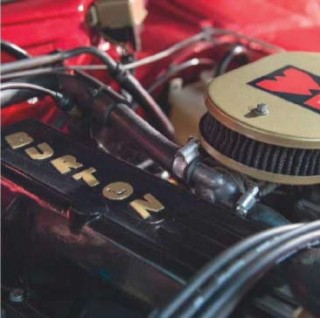 Thanks My fiancée, Alison Newton for putting up with all my crap, Danny Thorne for finding the car for me, Richard Beazer for help with some of the mechanical work, Pawel Kostka for helping me with painting the car, and Tino Kamal for using my car in his music video and the director, Pierre Jermaine from www.empirecreatives.com for putting the car in the music videos!

Black S stripes work a treat with the brighter red, while those 15 inch R4s fill the arches nicely. The original 2-litre engine was in great shape, so all Pinto fan, Daren’s done is service and carefully detail it. Darren’s improved the 2.0S, while keeping its appeal. The original Mk2-style Carla check seats were thankfully in great condition and just needed a clean. 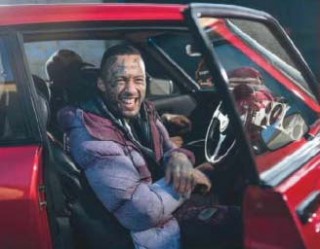 It’s been quite a Summer for Darren’s Capri, as despite being finished and on the road for a couple of years, 2019 has been the year that it’s really made a splash — going down a storm at both the Classic Ford Show and Bromley Pageant. Darren loves driving it too, and will happily jump in and head off to events all over the UK — testament to just how right Ford got the original S. Getting out and about in the Capri is also gaining it attention from some unlikely quarters — with rap artist, Tino Kamal (below) clocking the car and asking to use it in a recent music video (watch it at www.classicfordmag. co.uk). The director of the video has since used it in another promo, so what’s next — an appearance on Top Gear, perhaps? Let’s hope no caravans are involved…

We all expect a new project to need a fair bit of bodywork but just occasionally you stumble across a gem — just like Darren with this early Mk3 that was being used for dump runs! 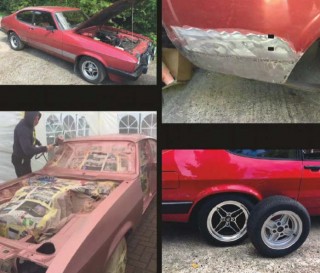 When Darren heard this unmessed-with, early Mk3 2.0S could be up for grabs, he was straight onto it.

The body was in great shape, with Darren just needing to do localised repairs including to the rear quarters.

Three-stage paint was applied true Homebuilt Herostyle: in a tent in the garden with help from a neighbour.

The final detail was to change the four-spokes for some bigger ones — and JBW’s 8x15s fitted the bill nicely.