Subtlety. Decorum. Sensibility. They’re big, fancy words for Georgian women in want of a country pad and a husband who owns all of Gloucestershire. With their wealth of syllables and Latinate origins, they bespeak a certain refinement and sense of class. In other words, they’re about as far from describing the average modified motor as any jumble of letters could be. After all, Mr Darcy wouldn’t have been seen dead in a chrome-flip-wrapped, hellaflush horse and carriage. It doesn’t have to be that way, of course. 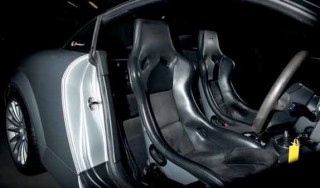 Maybe we oil-spattered, mad-eyed speed freaks can follow their straight-laced lead towards something quieter: something that doesn’t raise the heckles of Ms. Lace Curtains or Mr. Community Speed Watch. Head back towards factory standard and all the nonsense hassle of anti-car enmity could fade away. It’s tempting but – let’s be honest – it’s never going to happen. We simply love cars too much: screw the powdered wigs. Blow-off valves and over fuelling overruns and lumpy cams are just too persuasive.

Maybe there’s a middle way, one where we can get sweaty palms while looking composed and calm. We’re talking, of course, about street sleepers: cars that keep their light lit under the bonnet but retain hatchback-next-door styling. As a scene, it couldn’t suit fast Audis much better; who else produces S-line and RS cars that provide such speed and such subtlety straight from the factory?

The car pouting before you, the visually standard Audi TT Quattro Sport of husband & wife Helen and Grenville Taylor, could have been custom made to prove my point. Never before, and maybe even since, have the brains in Ingolstadt commissioned a model more likely to leave connoisseurs nodding and Mondeo Man blithely unaware. External changes over a normal Mark 1 TT were thorough but subtle: witness the full S-Line bodykit, model-specific 15 spoke alloys, black tailpipes, black mirrors and gloss black roof. Other detail changes include a black-lipped rear spoiler and bright red Brembo brake calipers. Just look at it. Drink it in and tell me you don’t want one. 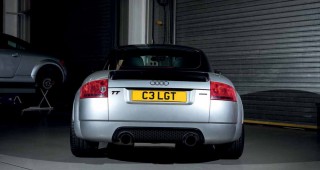 Move inside and the changes over a quotidian TT are more pronounced. The rear seats have vanished, for starters, and the fronts have been replaced by hard-shelled Recaro buckets. Racy. Were that not enough, the back of those seats is painted to match the external body colour. Now that’s attention to detail. A rear strut brace also sets a racy tone, while Alacantra on ever major control interface brings a welcome dash of the debonair. Again, the Taylors’ TT has almost nothing to distinguish it from any other Quattro Sport. So far, so subtle.

That’s where the understatement ends. Thanks to skilful work by the TT Shop, a Bedford-based firm that specialises in the maintenance and modification of the cute Audi coupe, this Quattro Sport now kicks out an estimated 280bhp and 310lb-ft. That’s a useful lift over the 240bhp and 236lb-ft of a standard QS and more than enough for a car that still sees daily commuting duties across the UK. Of course, there’s always space for a little more and the TT Shop have prepared the car to withstand a future big turbocharger conversion that could yield as much as 400bhp.

But that’s in the future: we’re getting ahead of ourselves. Let’s rewind to beginning, when Helen and Grenville were stripling youngsters with a need for speed. “We’ve always had modded motors,” Grenville explains, “Be that cars or motorbikes. Over the years, we’ve had Ford Escort Mark 2 RS2000s, Ford Fiesta XR2s, various V-Tec Honda Civics and the like. The Escort in particular was mega sideways all the time, especially with Helen driving it! We’ve had an Impreza before between us, a 240 Sport with a stripped interior and just two seats, which Helen really liked: in a way, that led to the TT.” 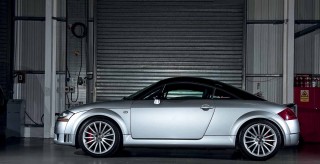 Fast forward to 2010 and Helen bought the couple’s first Audi: this very TT Quattro Sport. For a number of years, the car was enough as it was: Helen kept the car standard and commuted in it every day. Yet, in the spring of 2016, a major mechanical problem struck for the first time. The TT was burning oil. It was time to nip the issue in the bud and find a dependable Audi specialist.

TT Shop MD Dave Mahoney takes up the story. “Helen came to us in June with her Quattro Sport, reporting an unusual level of oil usage poor running. We quickly identified that as detonation damage on the walls of the fourth cylinder, resulting in a loss of material which just couldn’t be repaired. It was a real surprise to see this kind of failure on such a low-mileage car: the bottom end of the engine was all a complete write off.”

The prognosis was grim; the only solution was to fully rebuild the engine with a new block. That’s a big job by anyone’s standards and Dave had soon explained the situation to the Taylors. It didn’t take long for Helen to decide where to go next. Within a matter of days, she’d come back to the TT Shop with a simple question: ‘Wouldn’t now be an ideal time to do some upgrades?’ ‘Why yes’, Dave replied, ‘It could be. How much do you want done?’ Again, the answer was prompt and unwavering. ‘The works!’ 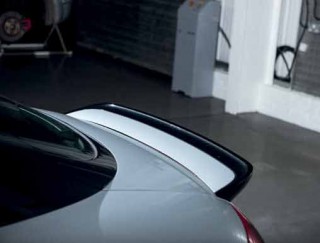 A specification was soon agreed upon and work began. Rebuilding the engine came first. TT Shop sourced and prepared a donor replacement engine block before stripping down the original engine to its constituent parts and renewing the bearings, gaskets, fittings and breather hoses throughout. The head also saw attention, with a thorough rework, skim and refitting with standard-specification valvetrain parts to bring the 1.8T back into as-new condition.

Modifications followed in two phases, both of which you can read about over the page. For those too impatient to wait, particularly drool worthy parts include: DM forged H-beam connecting rods with rifle drilling for better oil circulation; a K&N cone filter from a Honda S2000, to maximise intake surface area in the engine bay; Brembo 323mm front brakes discs; a SACHS Stage 1 organic clutch, chosen to offer the best balance between resilience and usability; and Bilstein PSS coilovers all-round, with a spring rate of 65kg/cm at the front and 117.5kg/cm at the rear. That’s some serious specification for such an unassuming car, I’m sure you’ll agree. Since getting the car back in early 2017, Helen and Grenville have taken plenty of time to enjoy their newly synthesised sportster.

“We’ve had big turbo cars before and they’re not practical,” Grenville relates, “This is great in day to day use, it’s remained really usable. We’re not into the show or track day scenes and, though we do go to a lot of events, it’s not a show queen. It’s just a nicely specified car that drives like it’s a little older, a little more exciting than the new stuff.” 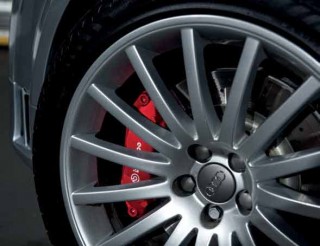 “The best thing now is how it stops and turns. We’ve always tried to do balanced builds, cars where the brakes and suspension are every bit as upgraded as the engine. It has to be a package. Now the car doesn’t lean at all and the Brembos stop it on a sixpence: you can drive it better than before and really push on in it now. That’s where the excitement is!” And all without attracting unwanted attention. Who said you couldn’t have it all? 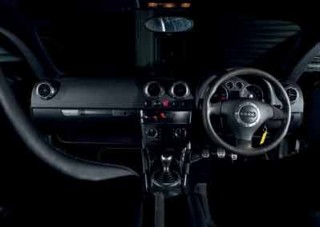 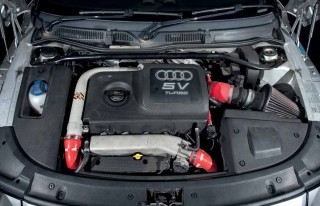 Like many other commercial tuners, the TT Shop offers modifications in easy-to-understand bundles known as stages. For Helen’s car, the firm worked towards a Stage 2+ conversion: the two signalling an intermediate power goal; the plus that the engine is supported by some over-specified parts that can facilitate further power jumps in the near future. As the car stands, these include a 540mm intercooler, silicone turbo boost hoses, a three-inch turbo inlet pipe and a TT Shop oversize cone air filter.

The remaining modifications were added in the second phase. Highlights include Brembo GT Junior 323mm front brake discs, H&R 25mm front and 21mm rear anti-roll bars and a huge Forge front-mounted intercooler. Since then, Helen has been enjoying the car as it is but may well ask TT Shop to carry out a big turbo conversion in the near future. The TT Shop offers three options that bolt straight on to a Stage 2+ car, giving the Taylors the choice of 325, 350 or a full 400bhp. 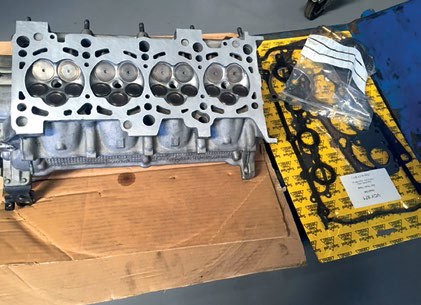 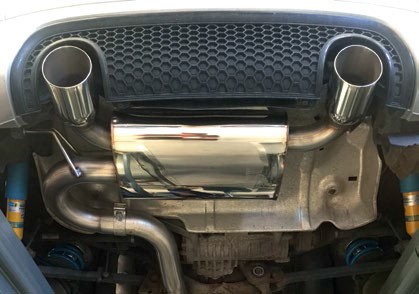 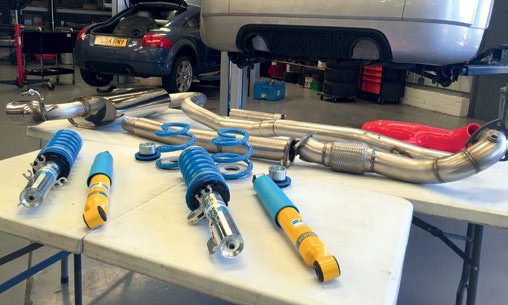 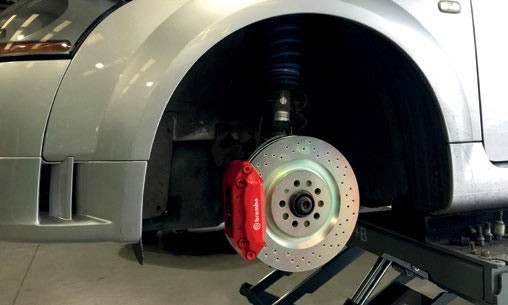 First Audi: This one!

Next step: Either a big turbo or another motorbike

Favourite thing: The combination of big power and day-to-day driveability

“Just look at it. Drink it in and tell me you don’t want one”

“You can drive it better than before and really push on in it now. That’s where the excitement is!”