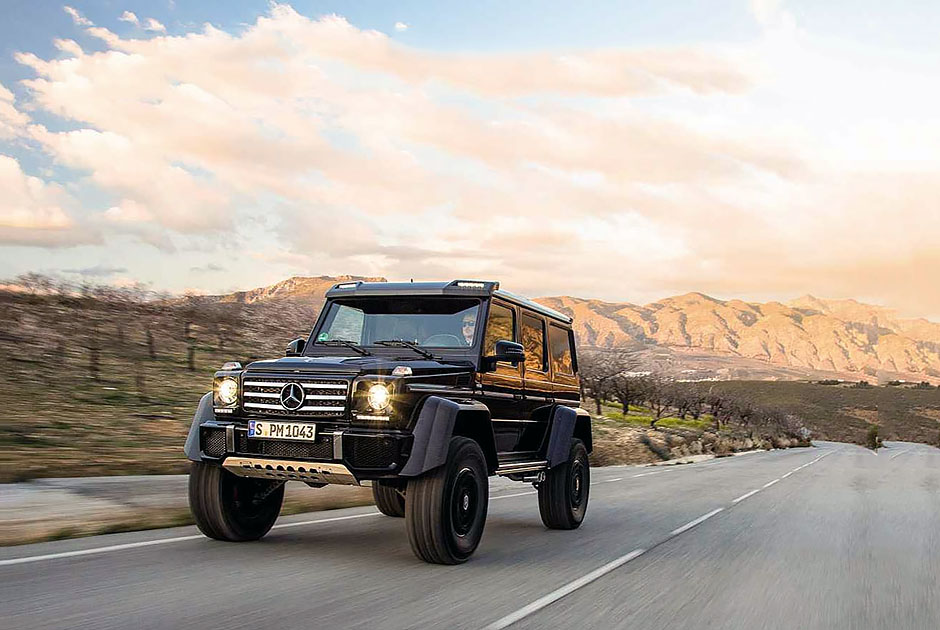 Mercedes built a six-wheel G-Class, so this 416bhp ‘concept’ is surely a given for production. Words Kyle Fortune. Photography Bemd Hanselmann and Daniel Maurer.

Back in 1979, when the Gelanderwagen was introduced, nobody could have envisioned the fact that 36 years later it would still be being built. Contemporaries such as Lancia’s Delta and Merc’s own W126-series S-Class may have reached classic status, but the G’s success keeps growing.

Indeed, 2014 was one of the busiest at the G’s Graz, Austria, production facility, and it doesn’t look like sales are going to slow down any time soon. Not if Mercedes-Benz goes ahead and produces this monster, the G500 4×4/2. It’s officially a concept for now, but in Granada, Spain, nobody’s talking down the potential for production.

It follows the limited-run, lunatic AMG 63 6×6, so the parts are pretty much off-the-shelf: expect to see Mercedes-Benz announce sales details after its Geneva motor show debut. Christof Stanger, in charge of marketing the G-Class, admits building such outlandish creations is ‘cheaper than doing television commercials’. He’s not wrong, and with that 6×6 finding more than 100 owners at a price of around £400,000, it’s good business, too.

So a production G500 4×42 is something of an inevitability. Expect a price north of £200,000, that buying you one of the most ludicrously capable overland vehicles ever. Like its 6×6 relation it rides on portal axles that, in conjunction with 22in wheels and twin-damper suspension on unique mounts on the ladder chassis, more than double the G-Class’s ride height to 450mm. That allows the G500 4×4/2 to wade as deep as a metre, while the approach, breakover and departure angles are all the stuff of a 4×4 enthusiast’s fantasies. With the same three differentials of its more modestly suspended relations, this topography-straddling, terrain- shrugging monster can drive literally anywhere and at whatever speed you choose.

Helping it achieve that speed is a development of the 4.0-litre twin-turbo V8 that debuted in Mercedes-AMG’s GT. Here it’s wet-sumped, while its pumping circuits are revised to cope with the angles it so easily achieves off-road. With 416bhp and 479lb ft of torque, Mercedes-Benz quotes a 130mph top speed – or 100mph if using the optional 18in beadlock extreme off-road wheel-and-tyre package. It feels like a six-to-seven-second 0-60mph car and, thanks to the blaring side-exit exhausts, sounds faster still. That pace in something weighing a few kilos short of three tonnes, taking up so much space and sitting at truck-driver height, is never anything but absolutely hilarious.

Within there are some nods to modernisation but the G500 4×42’s internal architecture remains delightfully old-school. What’s really surprising is its performance on the road. It needs to be a wide one, admittedly, but the G500 4×4/2 really can be flung about with surprising abandon. One of the dual shocks on each wheel is adaptive, switching between Sport and Comfort via a switch inside. Leave it in Comfort for a decent ride and usefully it’ll still firm up in the bends. Steering retains the G’s seat-clenching slow initial turn-in, but you quickly learn that, once it’s reacted, the G500 4×4/2 is more agile than it has any right to be. Anywhere, too.