The flame-new Jaguar XE S encounters a recently revised BMW 3 Series F30/2 and the new C450 AMG W205. The Audi model was maintained in 2011 for the last time.

AMG, M GmbH, Quattro GmbH – these names sound like music to the ears of car enthusiasts, but they represent the sporty top models of their respective series. Despite the downsizing trends still rumble V8 beasts under the hoods of C63, RS4 or RS5. And a future R version of the Jaguar XE supercharged V8 does not play as. BMW has, however, re-adopted with the current M3 from V8 – the splendid biturbo “six” makes the “backspace” but bearable. 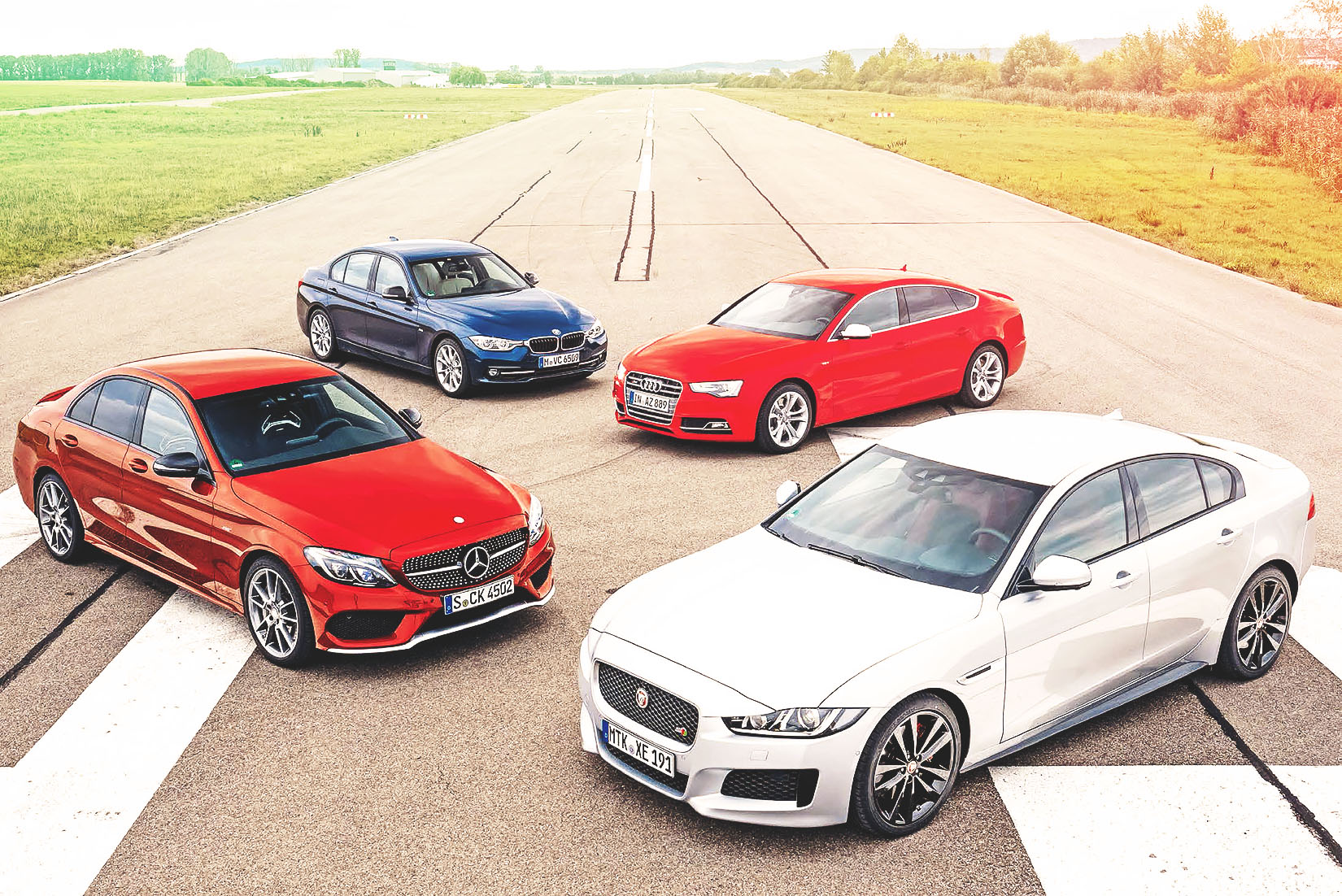 Great power cars, no question, but who can afford them really? Starts an M3 but at 71 800 euros, a 63 C even at 76,101€! Did it not one size smaller? However, they have. A step underneath the wait Understatement- athletes, one could also say: the models for quiet enjoyment. Ruckus Loser appearance with pleasant little spoilers, muted colors, not too thick wheels, partly just two shy exhaust pipes.

They are almost as fast as the parent prestige carrier – just much cheaper. About EUR 25,000 (EU price range) separate the M3 F80 from the facelifted 340i F30/2 – not competitor, already clear. But you really need everything a M3 factory brings so? Bodybuilder appearance, race track chassis, brake discs in Family Pizza format? A 2015 BMW 340i F30/2 springs, cushions, steers, brakes. And that more than tidy: calm, stable, sovereign and thereby taut, defined precisely. In broad BMW 340i uses the same three-liter straight-six engine as the M3 F80 / M4 F82, instead of two turbos, a two separate exhaust ducts ensures within streaming twinscroll charger tidy boost pressure. We were amazed when at the Acceleration to 100 km/h 4.6 was on display – these are just a couple of tenths more than takes an M3 F80 / M4 F82. Up to 200 km/h BMW F30 3 Series 340i loses only 3.5 seconds for the M model. Hmm, the inconspicuous blue sedan was apparently fully prepared at the factory, which is crying out for a power measurement…

The 346bhp spits out our insure measurement. Whole 20bhp more than indicated, although, relatively speaking, the only six percent are scattering but upwards – and still in the green zone. What BMW has too much, seems to be missing the Audi S5: if the sheer acceleration he can keep up this comparison yet, but while passing losing the connection. What lies not only on speed rather greedy because torque compressor engine, which is really awake until 3000 tours, but also on the long translation of the course five, six and seven. The dual-clutch gearbox itself operates in the usual perfection – so soft and comfortable that you feel connected by a converter automatic transmission. 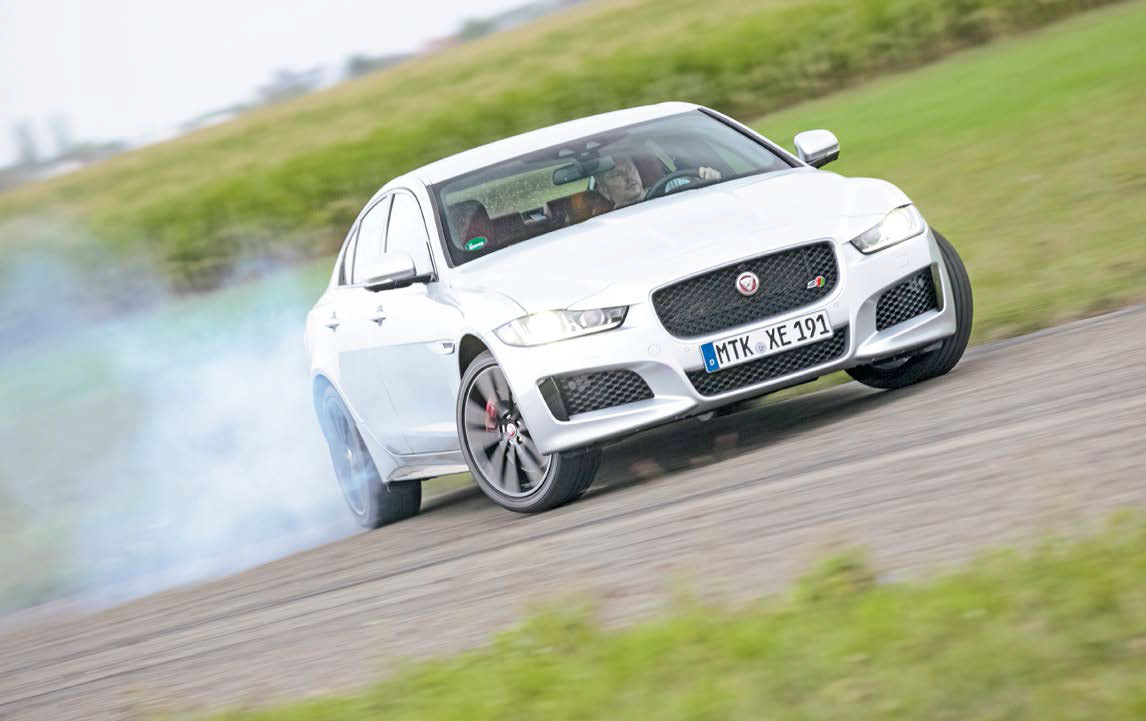 The Jaguar XE S sets as the BMW on an eight speed automatic transmission with torque converter. To be precise, it is the identical transmission from ZF (ZF8HP), only with a different software. While high in early BMW and downshifts late and so uses that already at low speeds very broad torque foundation optimally, it is acting in Jaguar clearly offensive.

Because the compressor motor of the britons builds its torque peak on linear, needed for rapid progress ever seen a lower gear than the broad-shouldered BMW engine. From a passage weakness is no question of the Jaguar still be – like show our passage measurements, he has also neatly below its torque rated speed of 4500 tours Punch. The combination of sporty V6 compressor and tangy switching converter automatic is certainly well done and very sexy. On top there’s wonderful supercharged howl from the bow – it is not very loud, in doubt, just leave out the radio and enjoy. 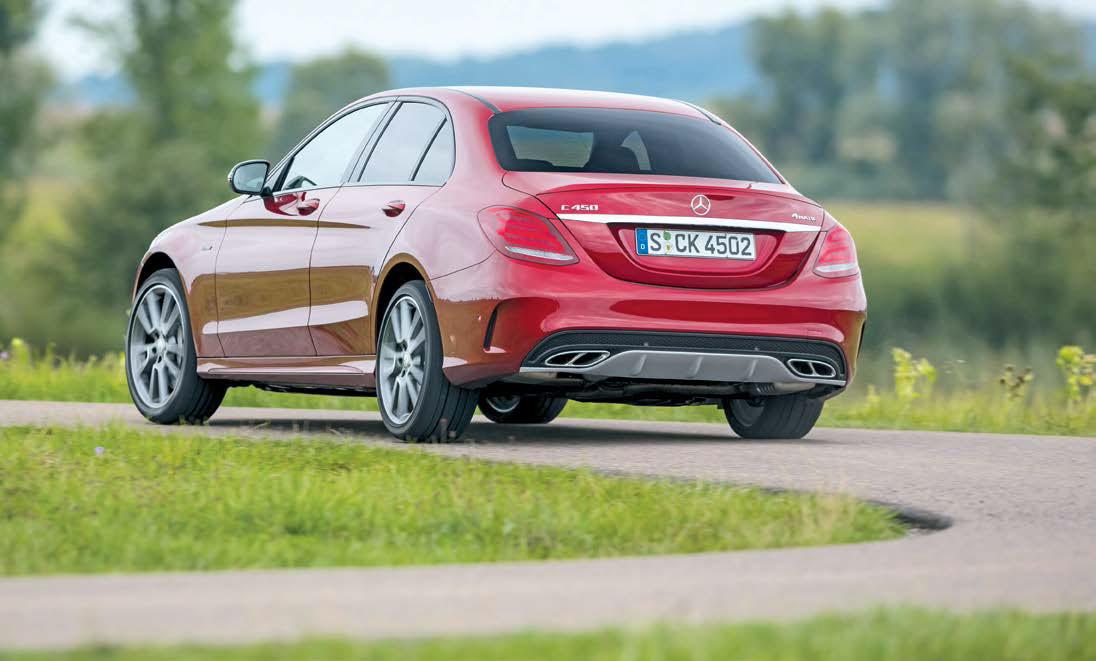 The Mercedes is artificially ventilated, of two compressors. The 333bhp from its biturbo V6 from the C400 W205 was sent to the AMG-training camp and now effortlessly pumped 367bhp in the seven-speed converter automatic. The performance figures are excellent; the Benz can follow the only one in this quartet the BMW reasonably. Like the Audi S5 is sold exclusively with (emphatic) all-wheel drive of the C450 AMG W205. The traction advantage of the two wheel drive vehicle is obvious that driving safety in wet conditions as well as in winter conditions is undisputed. But in this midsummer comparison test, the agile have convinced more with their more balanced axle loads us. Tight curves that drive all cyclists ever to understeer, the BMW surrounded entirely neutral and with pace. Not quite innocent mind: the excellent Michelin Pilot Super Sport with its own BMW specification. 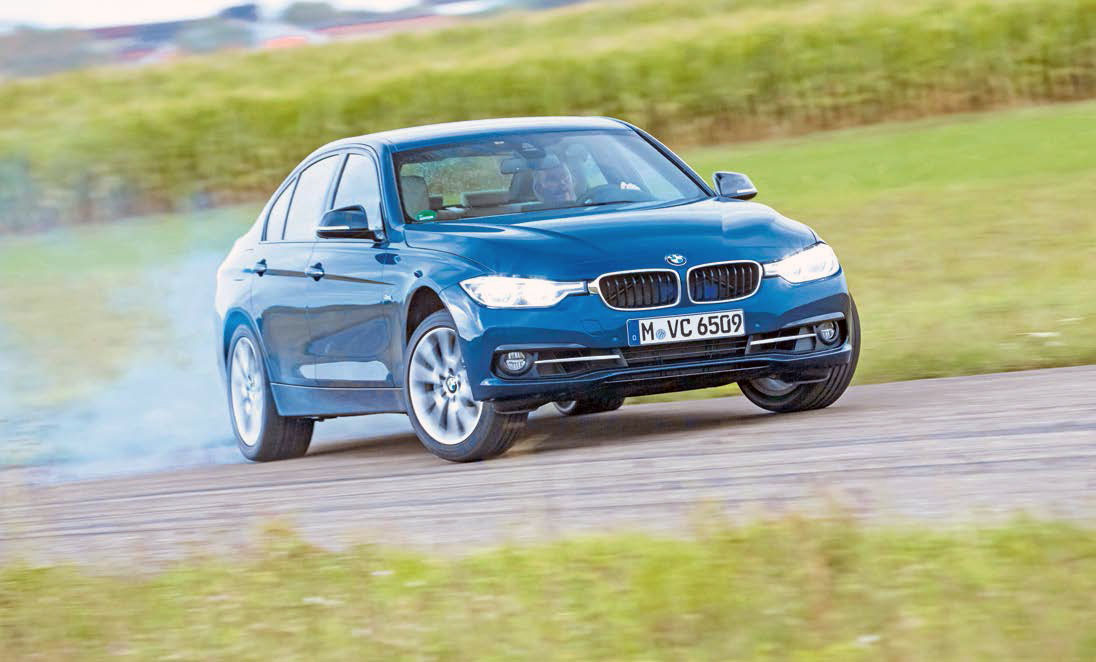 The Dunlop Sport Maxx RT of Jaguar can not keep this enormous level of grip. The cat slipped in the border area but not as sappy on the front paws, but depends more or less butt out. Who now again traipsing with fully activate ESP on the gas can to stop lying textbook drifts of fleecy-delicate cross. But that very agile tuned suspension that knows virtually no understeer is not hard, but very finely appealing and comfortable. Directly translated, very smooth and extremely precise steering gives the Jag a playful lightheartedness. Although he expresses at least 1.7 tons on the scale – and that, although he is the only one almost completely in this comparison of aluminum. The C predominantly manufactured in steel sheet 450 AMG brings just 12 kg more on the scales – including four-wheel drive! The sinewy BMW comes on comparably priced 1625 kg. So where Jaguar has hidden all the pounds?

Still Doller’s driving the Audi 1818 kg it puts on the scales, what its longitudinal dynamics a little ea brake. Dynamic cross but he does not belong on the scrap heap, grip levels and possible cornering speeds are enormous. Built in the test car optional dynamic steering is very direct translated, precise and sensitive. It helps the Audi to good maneuverability, making him look like a spring and movable Boxer. Although the also subject to surcharge slip differential when maneuvering into the rear axle to significant tensions.

Distortion in the drivetrain does not know the all-wheel drive Mercedes. Yet we wanted a pure rear-wheel drive, lighter C450 AMG, the steers yet joyful and overrides times rough. The driven front would we believe in brute C63 S rather needed – so it handles Mercedes AMG finally its big brother E63 S. 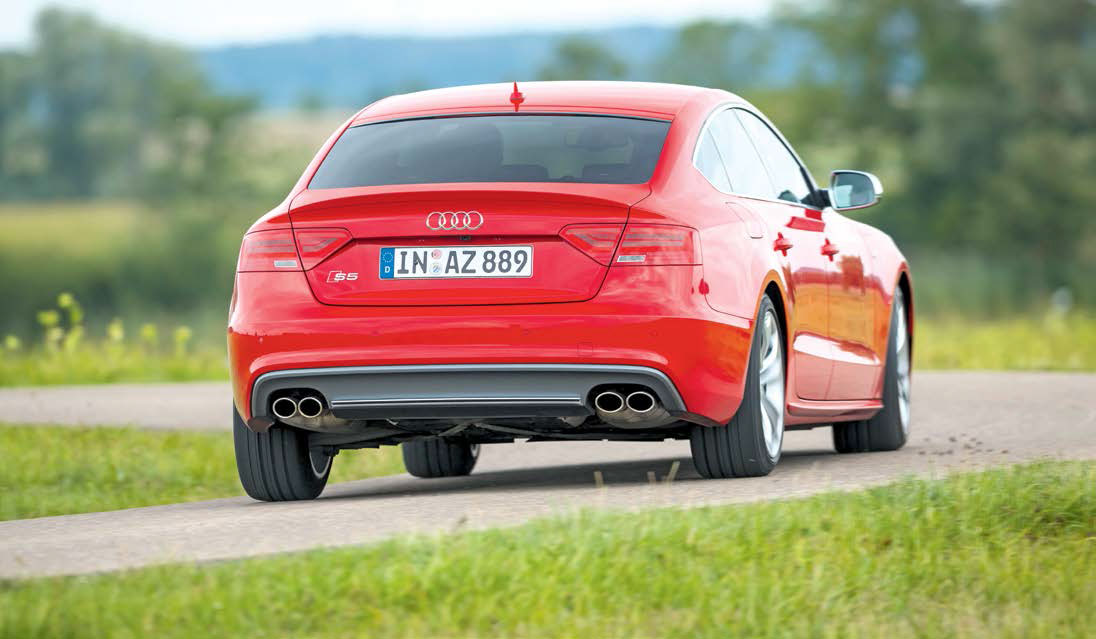 A few words about the interior: With regard to material quality and workmanship quality play all three German manufacturers in the premier league. S5 and C450 W205 set in this comparison, the benchmark, the 340i F30/2 is lagging most in the material appearance a little bit behind.

The Jaguar fall significantly from here: cheap-acting synthetic leather on the dashboard, a lot of black plastic in the rest of the cockpit – in this price range we would have expected more. Well, you get used to it, the fun consoles over it. But we can not get used to the nested, lame touchscreen infotainment system Inexplicably, even air distribution and heated seats are controlled via the screen – the rest of the climate but on separate buttons.

Feelings? Yes, there are in this class also – admittedly not very large V8 exhaust flaps-drama. The AMG-Pimp C 450 looks sharp and sport tent in Sport mode + keck from the tailpipes. The Audi loves the speeds and rewards the lead foot with a smoky roaring timbre. The Jaguar we give unasked and tough subjectively the title “best midsize sedan”. And the BMW? Well, who maintains by far the most inconspicuous appearance, at its rear could also resplendent BMW 316d F30. Appearance and reality lie with him the furthest apart. A truly rolling understatement. We like!

Driving dynamics of the BMW is unbeatable, also still the most affordable. The big surprise is the jaguar, the enthusiasm with fine steering and top chassis. The Mercedes is perfect, but not quite ready as much fun as the Briton. The Audi brakes be a stately weight.

By far the best value for money offered by the BMW. The Audi can pay his PS most expensive.

Under the plastic cover lurking compressor and two intercoolers.

Under full load, the compressor sings the song of the performance

TwinPower Turbo: Sounds like Biturbo, but thinks a twin-scroll supercharger operator, who will be passing through two separate exhaust ducts

Generous packed in plastic, you see nothing from biturbo V6. With 367bhp engine the strongest in this comparison

Mercedes C450 AMG The optional Performance seats (from 2321 euros) are a little hard, but hard to beat in the lateral support. The Comand operating concept can not compete with BMW’s iDrive. Transmission gear selector to the right on the steering column, button for manual mode on the center console. Top-processing.

Jaguar XE S The out-propelled has in the meantime Jaguar tradition – we think it’s gimmick. The infotainment system is nested, lame and can take your last nerve. Steering wheel and seats are well formed. Much of artificial leather and black plastic.