We don’t envy the team that has to come up with new BMW colours. Where do you even start? There are already so many amazing colours and now you have to go and come up with a new one, and when a new M car is launched it’s even worse. Every new M model comes with its own exclusive colour(s) in which it will be revealed to the world, so no pressure or anything… When the M3 and M4 made their first public appearance we got our first look at their two new hues, Yas Marina blue and Austin yellow. Yas is a metallic pastel blue that was really quite unlike anything we’d seen before, while Austin is an absolute smack in the face explosion of intense yellow. It’s a big, bold, bright colour and while even something as strong as Sakhir can sometimes slip under the radar, there’s no escaping that sheer intensity of Austin – it’s never anything less than seriously audacious and it needs a bit of bravery to pull it off. Pick an Austin M3 or M4 and you will always get noticed, everywhere you go. For some people, that’s not especially appealing but when you’ve built an M3 that’s as full-on as this particular example, anything less than a shade as visually dominant as Austin yellow simply wouldn’t have cut the mustard.

“ For all his under-bonnet needs Rommel turned to Dinan, which knows a thing or two about making fast BMs even faster, and treated his M3 to a healthy selection of items from its extensive catalogue” 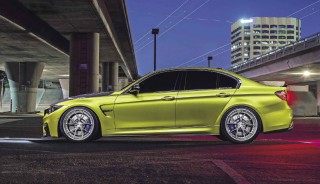 We’re not going to beat about the bush here – regular readers will know that we are huge fans of the F80 M3, we just love it, and this particular example really makes us go weak at the knees. Just look at it! Everything about it is just so right – the way it sits, the way it looks, it’s so utterly gorgeous and ticks just about every box that we would like to have ticked. It is drop-dead gorgeous, outright stunning and the sort of M3 we’d build if we had the money to build an M3 in the first place. Sigh. Okay, now, first impressions – when you look at this car who do you see driving it? We reckon that you’re thinking of someone in their mid-20s, maybe a little bit of baseball cap action going on, a young guy who’s made it… and you’d be completely wrong because the owner of this F80 M3, this Austin explosion, is knocking on the door of 50 years old, instantly making him the sort of person we want to be when we grow up (if that ever happens). He goes by the name of Rommel Canlas and he happens to be the owner of Canlas Mobile Tint in California; pop that company name into Instagram and you will see the account’s photo stream peppered with shots of Rommel’s other car, an Atlantis E60 M5 on air with a Wald body kit, so he’s clearly a guy who’s got modded BMs on the brain, but where did it all start? “Ever since I bought my first E39 way back 2002 I’ve only bought BMWs as they are the ultimate driving machine,” grins Rommel and that Five was followed by an E36 M3 running a Dinan Stage 2 package, styling and wheels, the aforementioned E60 M5 and an E70 X5 M running a healthy 650hp. Oh, and he still owns all three of those cars alongside his F80 M3, so when the BMW bug bit, it clearly bit hard. 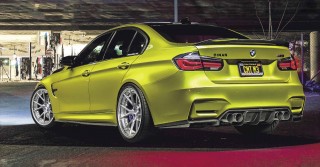 The transition from that trio of M cars to this F80 M3 isn’t a particularly huge step and it seems like a pretty logical one but a purchase like this is rarely fuelled by logic and obviously there was plenty of passion involved. “I love the stock wide-body and aggressive look and performance of the BMW F80 M3,” Rommel says and we are in agreement with him on each of those points. The narrower body of the M3 Saloon combined with the wide track it shares with the M4 results in those fat arches that make it look so damn muscular and we don’t need to tell you how fast it is but, naturally, there’s plenty of room for improvement on both fronts and Rommel had a plan for his M3 before he’d even bought it.

The first step on his M3 journey was making it faster – our kind of guy – with his mantra for the engine upgrades being “performance without sacrifice,” meaning he wanted power but he also wanted reliability, the ideal combination for any modified car. For all his under-bonnet needs Rommel turned to Dinan, which knows a thing or two about making fast BMs even faster, and treated his M3 to a healthy selection of items from its extensive catalogue. These include a Dinantronics Stage 3 Performance Tuner, carbon fibre cold air intake, high performance heat exchanger, high-flow X-pipe and free-flow stainless exhaust system, which combine to take power up to a hefty 550hp along with 550lb ft of torque, giving this M3 a serious turn of speed but they also mean that Rommel’s car gets to wear the ultimate badge of honour, that being the Dinan badge itself.

You see you can’t buy the Dinan badge, the only way to earn it is by accumulating enough points through various Dinan purchases, with different modifications carrying different values, and, once your total hits 10, you’re allowed to request the badge, which sits proudly on this M3’s rump with the black lettering matching perfectly with the black M badge on the other side. Beyond that and all the power, the engine bay itself looks stunning, with all the Dinan carbon intake elements plus that Austin yellow engine cover, which really adds the finishing touch.

With some pretty serious brakes on board from the factory, Rommel didn’t see any need to throw any upgrades in their direction as they’re more than up to the task of dealing with serious power upgrades but he has paid attention to his wheels and suspension and they truly transform this M3 and take it to another level. For the suspension he hit KW’s catalogue and splashed out on a set of top-of-the-range V3 coilovers, which offer all the adjustment anyone could possibly want and need, allowing Rommel to pick his perfect ride height and the lows they deliver are truly sublime; you’d be lucky to be able to slide more than a light breeze between the rubber and the arches. It’s majestic. As are the wheels, which come courtesy of RSV Forged and look absolutely stunning and work so well on the M3. “I’ve always loved the concave three-piece look of RSV Forged wheels,” explains Rommel and his chosen design is the RSF1 S3, with 20s the perfect fit for the muscular M3 and the combination of that concave profile and the brushed grey centres and polished lips is simply breathtaking, and they look perfect against the Austin yellow bodywork. 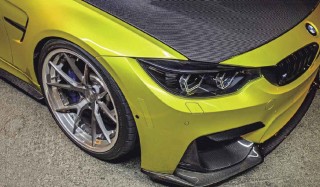 Of course, a huge part of this build is the styling and there are a lot of elements that combine to make this M3 even more epic, giving it the sort of road presence most other cars can only dream of. The carbon roof pointed Rommel in the direction he wanted to go with the styling and so this M3 has been slathered in gorgeous carbon, with the black weave appearing wherever you turn. Star of the show is without doubt that epic Varis carbon fibre vented bonnet, which looks simply awesome, and it’s joined by a Vorsteiner carbon front lip, M Performance carbon front splitters and carbon mirror covers, a Sterckenn carbon front bumper insert, PSM carbon side blades, a Dinmann carbon rear spoiler and Vorsteiner diffuser. All these ultra- aggressive aero elements combine to devastating visual affect, giving this M3 an absolutely ferocious appearance and the carbon looks absolutely stunning against the Austin body, offering the perfect colour contrast. In addition to the acres of carbon, Rommel has also added a host of additional styling touches that really finish things off perfectly, like the IND painted front and rear reflectors, the M Performance Euro Shadow Line rear lights and those striking OSSdesigns headlights, which look absolutely awesome. 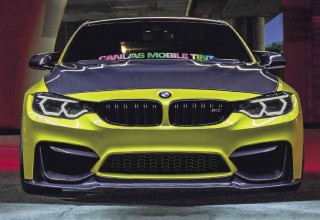 At first glance the interior modifications appear to be much thinner on the ground but, look closely, and you’ll see that there’s a lot more in here than meets the eye. “The theme I like on my cars is carbon fibre and Alcantara and with the help of my son, Tim, we put them together on the M3,” says Rommel and it’s a killer combo that works so well. He has opted for an M Performance Alcantara steering wheel, which has been enhanced with the addition of carbon trim, and the rest of the interior is positively swimming in carbon. There are Dinmann full carbon seat shells and centre console trim, carbon trim across the whole dash, a carbon gear selector, Alcantara arm rest and the very cool IND Polar blue start-stop button. There are also M Performance pedals and floor mats and it all combines to make the interior feel seriously sporty as well as looking exceedingly sexy.

Rommel’s F80 M3 is an absolutely awesome machine, one which looks simply stunning and backs up those ultra-aggressive looks with some serious power, making it the complete performance package – this is one M3 you don’t want to mess with. “The Dinan Stage 3 package is my favourite mod,” says Rommel, “I love the power,” he grins and considering how rapid the standard car feels, the 120hp boost that the Dinan performance upgrades have delivered makes this M3 an indecently rapid machine. Unsurprisingly Rommel hasn’t got much left on the shopping list for his mighty M3 because it’s pretty clear that he’s built a seriously capable and complete machine, with just some more interior mods on his to-do list and we’re willing to wager that more carbon is going to be involved. If you’re a serial BMW owner and modifier you’re always thinking of your next project and Rommel has his sights set on an F90 M5 – we don’t blame him – but that doesn’t mean he’ll be selling his M3 anytime soon. He is not a man who moves from project to project, he like to keeps his creations, putting together a modified collection that any BM fan would love to own and this magnificent M3 is without doubt the star of the show.

“For the suspension he hit KW’s catalogue and splashed out on a set of top-of-the-range V3 coilovers, whichoffer all the adjustment anyone could possibly want and need” 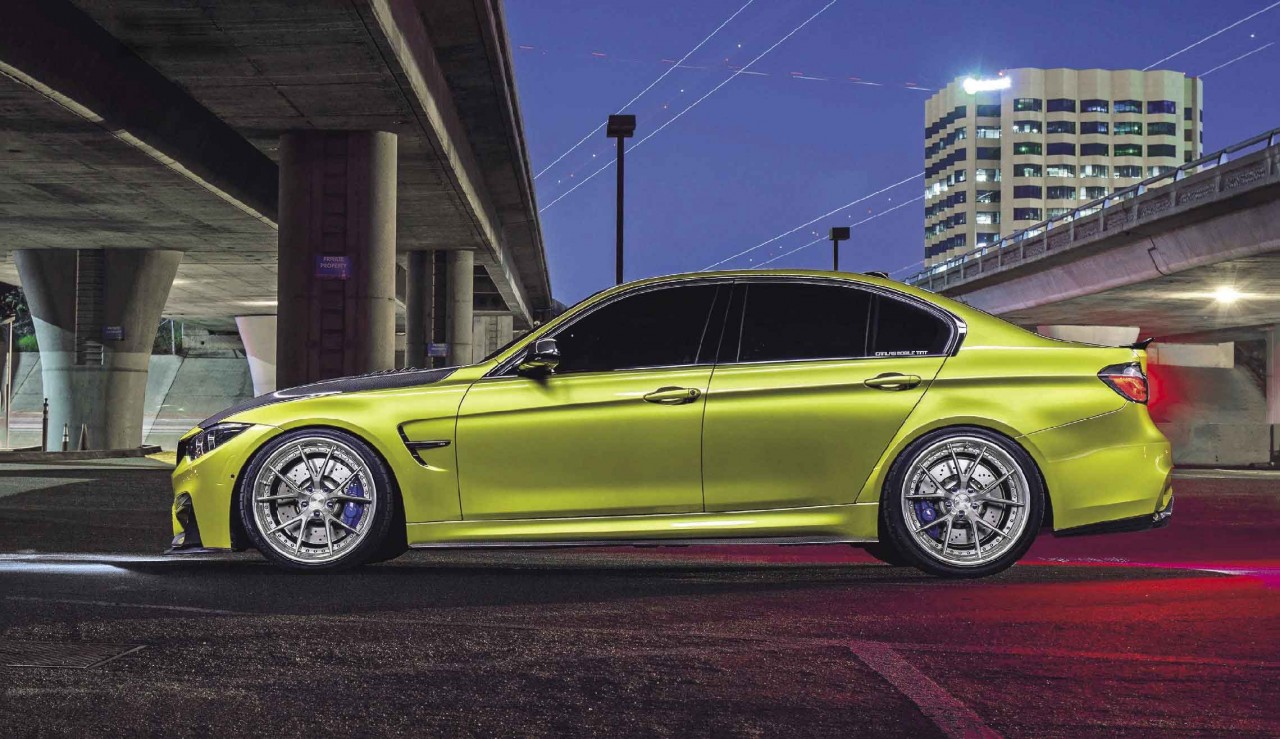 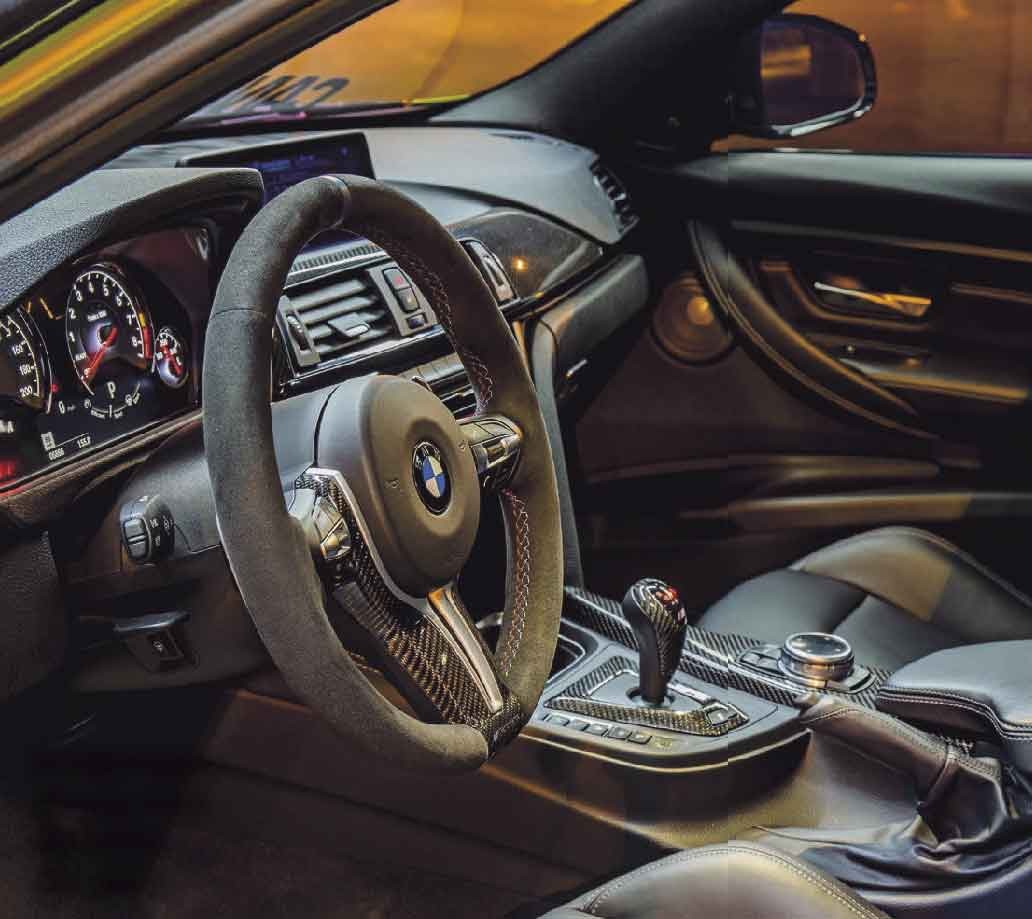 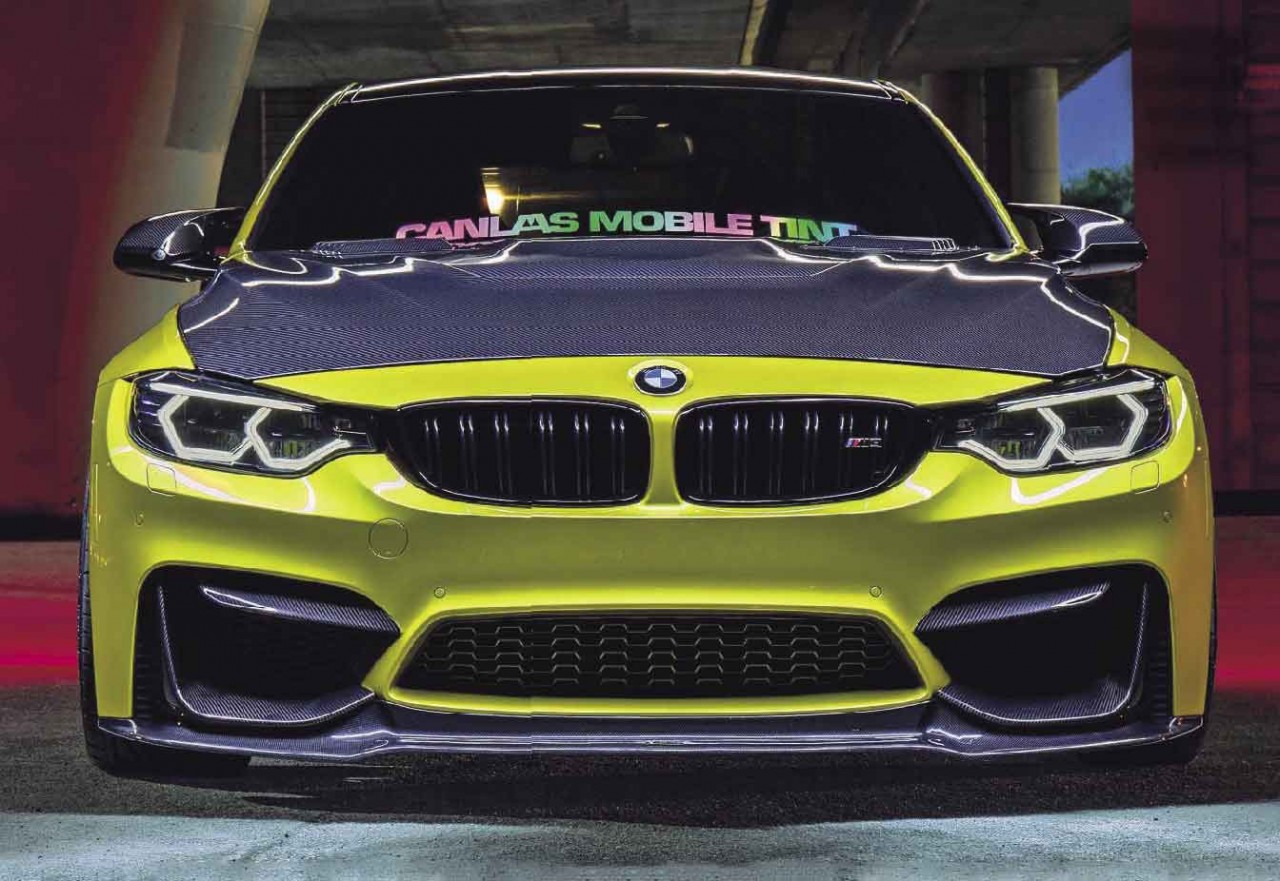 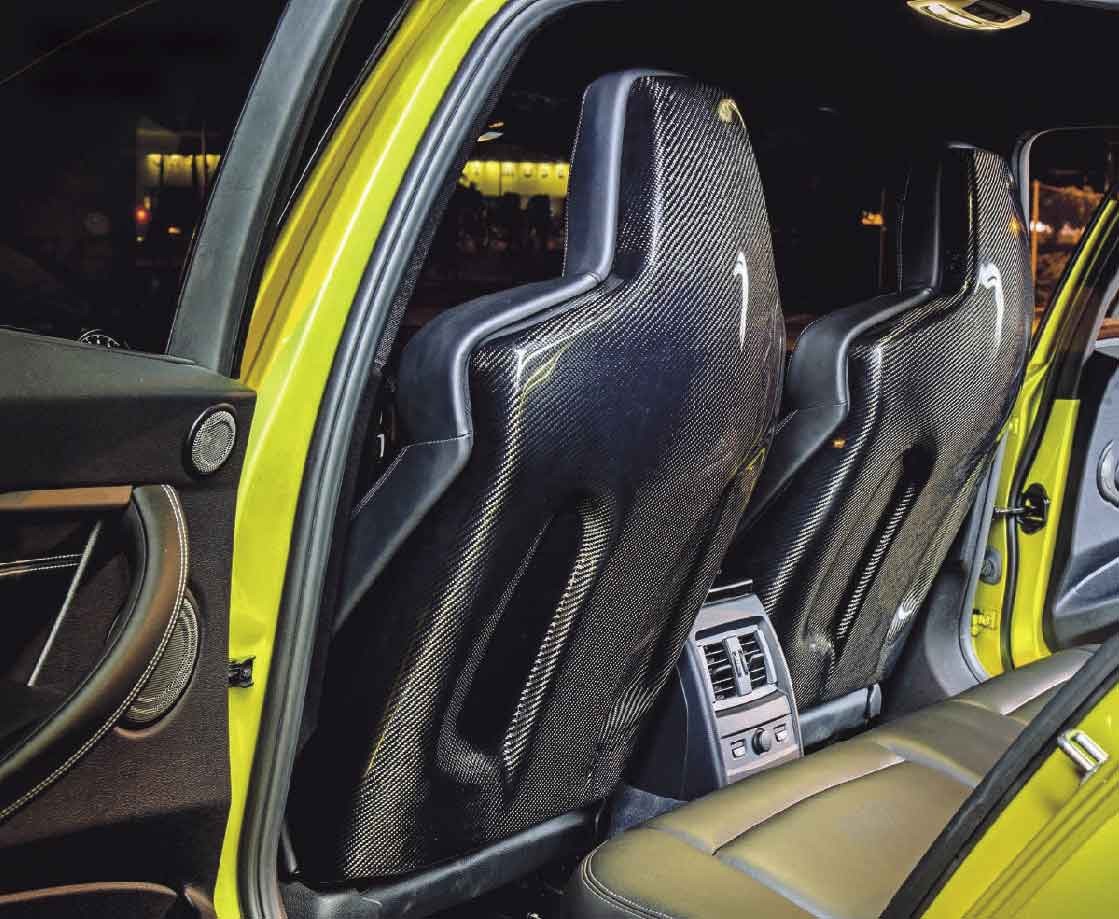 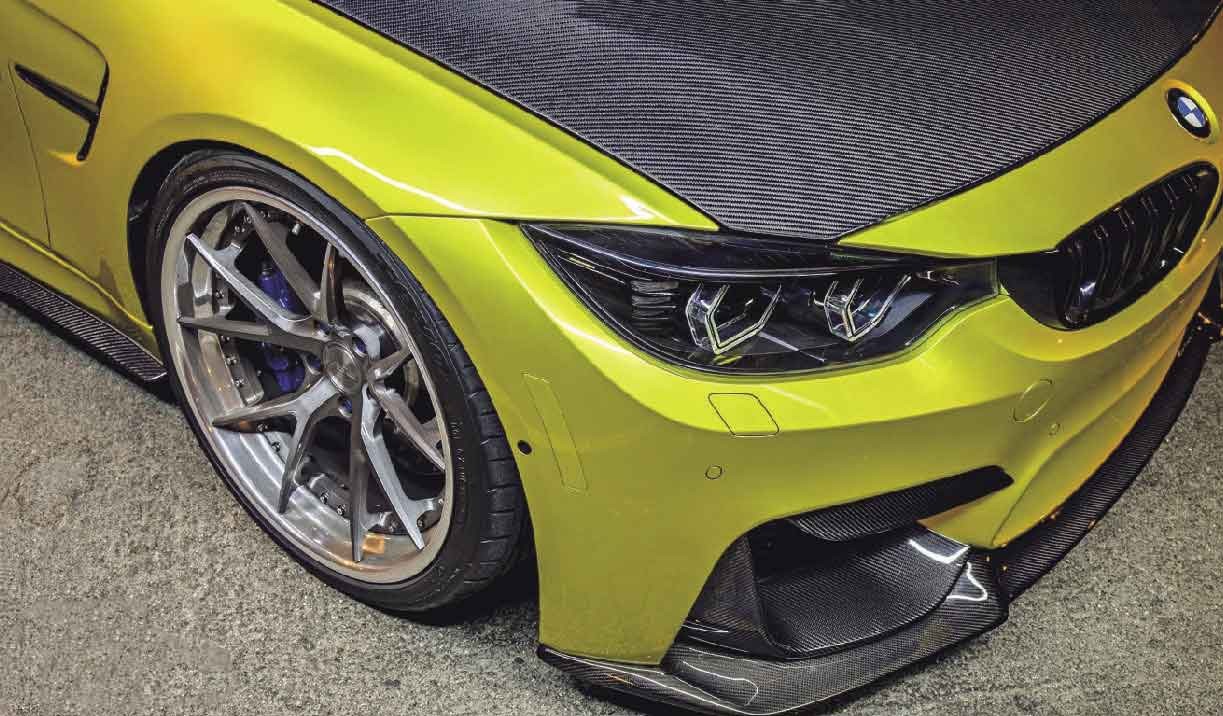 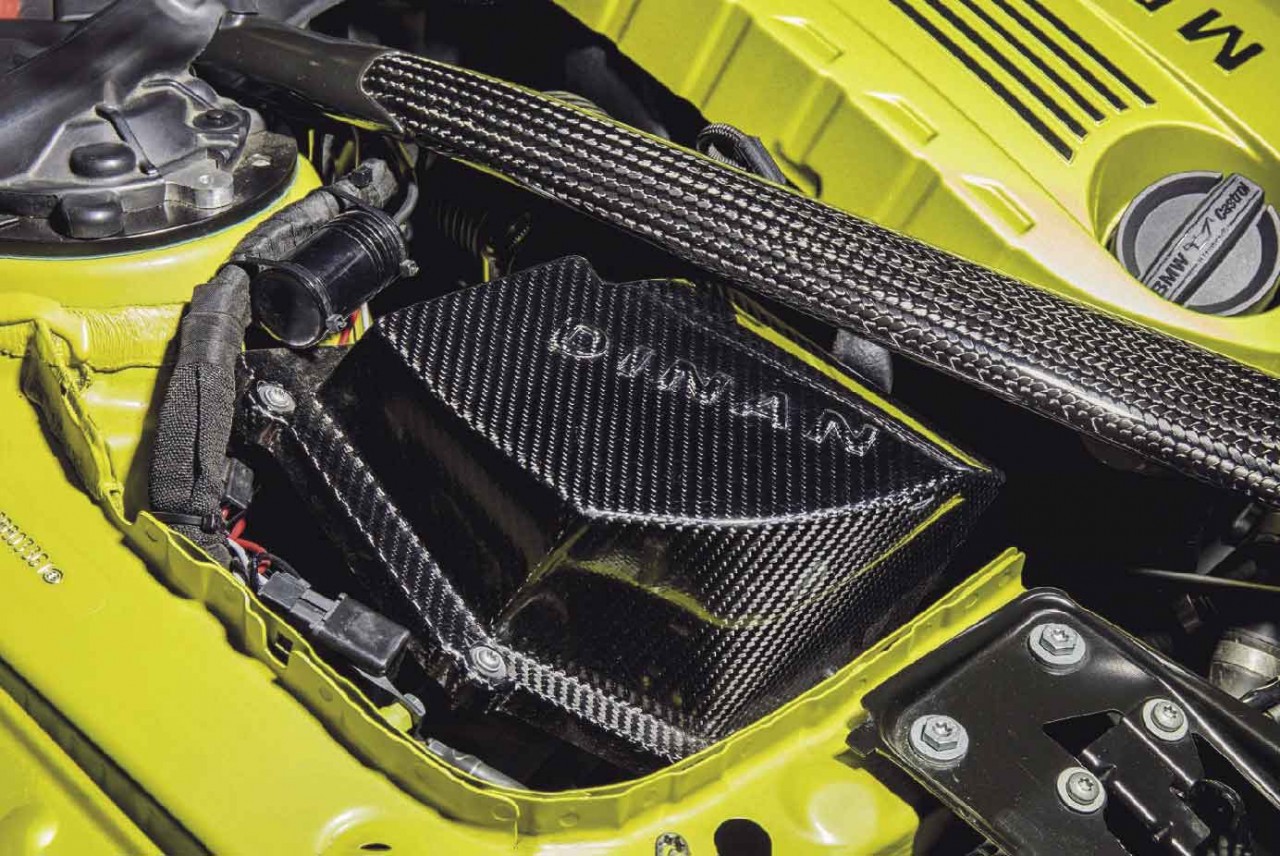 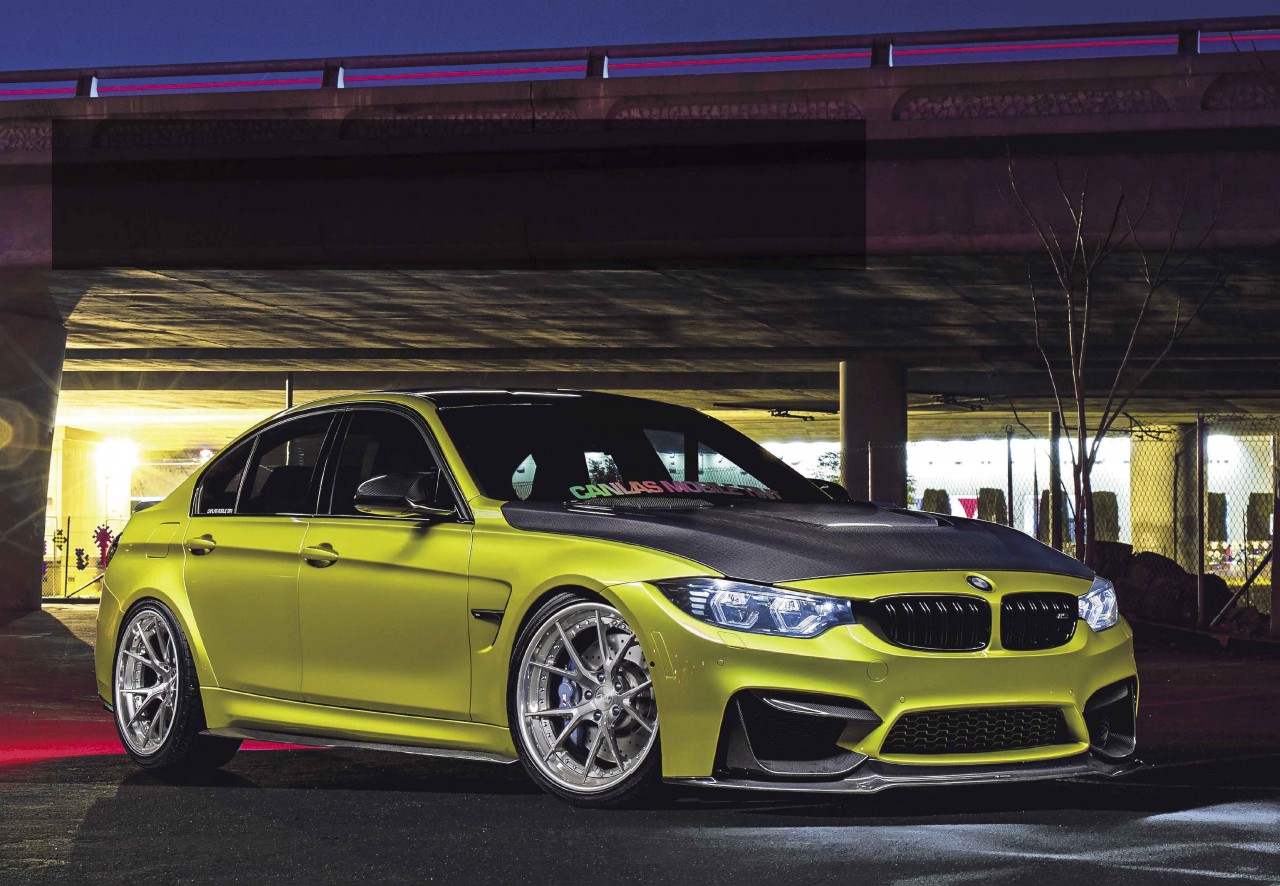 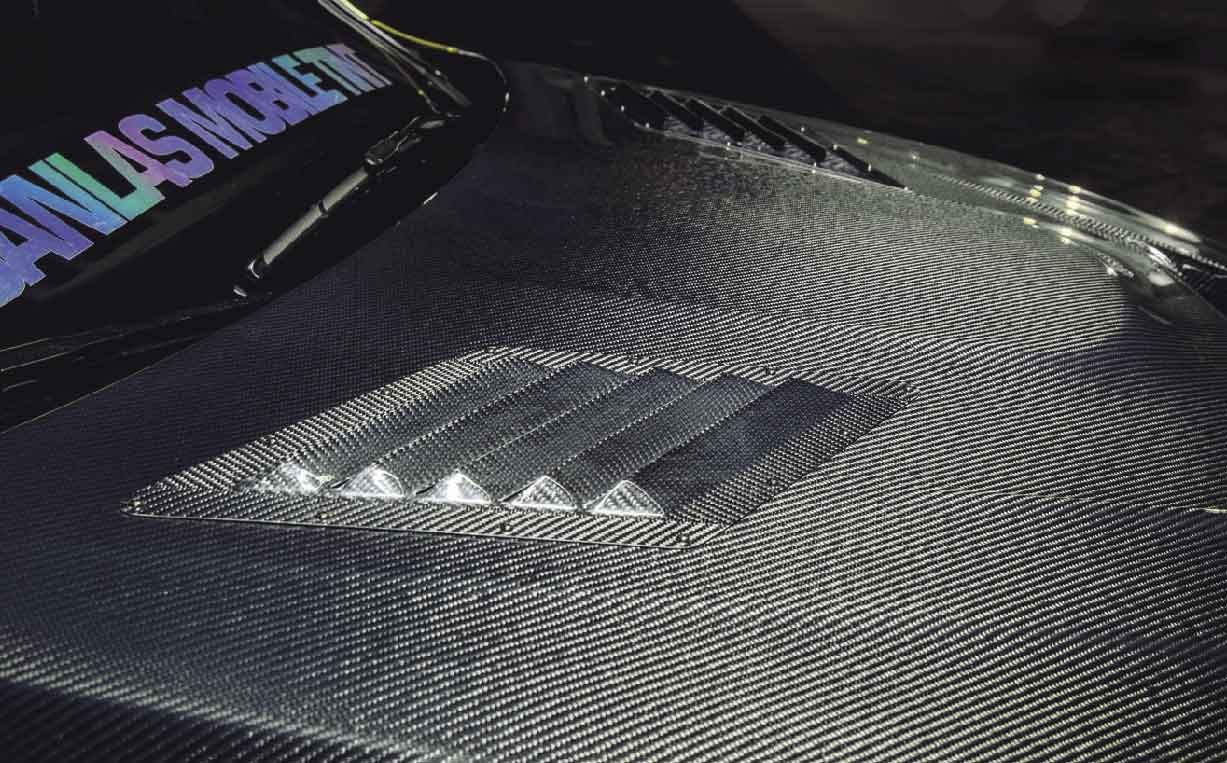 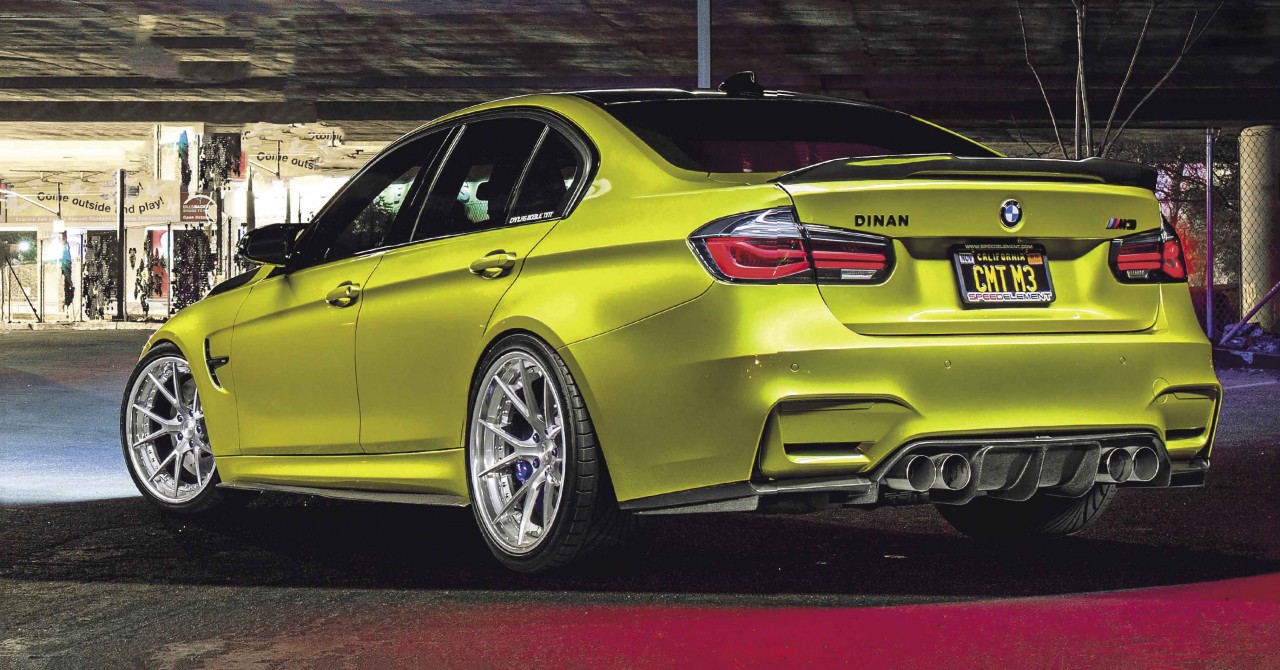