When it comes to low- budget luxury, you really can’t beat the E38 7 Series; for balling on a budget from the BMW stable, the third-gen Seven is an exceptional executive cruiser for very little money, so its appeal is very easy to see. It’s a good-looking car, too, hailing from a time when BM styling was elegant and unfussy and it still has plenty of presence today – a 7 Series will always look money. All of the above means it’s pretty popular on the scene, too – obviously a Seven will always be a slightly niche choice when everyone else opts for a 3 Series, but that’s what helps to make a nicely-modded 7 Series really stand out and Tobias Lampinen’s 740i most definitely does that.

Where once the 7 Series was the reserve of the older, affluent business type, looking for something suitably comfortable to cruise in from meeting to meeting, those rock-bottom prices and the budget luxury appeal along with the aforementioned modeling potential, mean that today you’re just as likely to find someone like 23-year-old Tbbias behind the wheel. Of course, the fact that Tbbias owns an E38 – alongside an E30 320i – comes from the fact that he’s always been into Bavarian machinery; “I would say since I was 15, that’s when I got my eyes opened to cars and I loved BMWs; I remember around when I was 16 my dad bought an E61 535d xDrive and the car was also tuned. I loved that car and how it pushed me back in the seat,” he grins and that early experience got him hooked. Hailing from Sweden, it’s no surprise that Tobias’ first car was a Volvo (“A Volvo 740 as all other people in Sweden also drive when they turn 15,” he laughs), but the minute he turned 18 he knew what he wanted. “My first BMW was an E36 325tds, which was already on aftermarket wheels and coilovers when I bought it. I think it was because of my dad’s 535d that I got interested in the BMW diesel cars and I had also driven the Volvo diesels before, and I knew the E36 was a fun car and with a strong drivetrain. Also I tuned the car by putting in a resistor to the diesel pump, resulting in more diesel going through the system and was also spooling up the turbo from 7psi to 23psi. That was a fun car,” he grins. 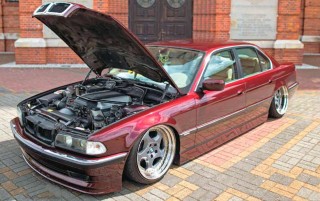 Of course, this Seven is quite a departure from that E36, so what made him decide to move up two car classes and join the luxury brigade? “When I was around 17/181 saw the black E38 from Jeremy Whittle with the Alcantara steering wheel and the purple interior, sold. When I started working after school at 18 and forgot about cars for a while, but when I was 201 was looking for a new car because I was driving around in my Passat and did not want to build on it for the summer. I just wrote to my friend Joakim and he said “Why don’t you buy an E38, there are a few out there for sale?” When he said that it all came back, the need for a BMW 7 Series slammed on the ground. That same weekend this car came up for sale and that’s when I got it,” he grins and not only did Tobias waste no tone in getting his hands on an E38, he knew exactly what he wanted to do to it.

Now, obviously, if you’re on the quest for lows then your journey will ultimately take you to air-ride paradise, where all those seeking ultimate lows inevitably go, but air is expensive and jumping straight into it isn’t always an option, and it wasn’t for Tobias. “I wanted air suspension on the car but could not afford it at first,” he explains, “so when I started modding the car in 20161 went with BC Racing coilovers.” These delivered a tasty drop and made a huge difference over stock, and Tobias paired them with a set of Work wheels, instantly upping the E38’s street appeal. Nice work. To this he added a hidden aftermarket stereo along with a sub and, because there’s a V8 under the bonnet of his 7 Series, an exhaust was needed so he added a full custom system. At this point Tobias had a good-looking Seven with some seriously nice mods on board and plenty of people would have left things there but he was only just getting warmed up…

“2017 is where it all got out of hand,” he laughs, but it was all so worth it. First up, the suspension, and while the BCs were good they weren’t the air-ride that Tobias wanted so it was time to make the move from static to pneumatic. Only thing is, Air Lift, his chosen air supplier, doesn’t offer an off-the-shelf kit for the E38 but that wasn’t a problem for Tobias; he simply got his hands on an E39 5 Series kit instead and modded it to suit the E38 – problem solved. To go with his newfound lows, he decided that it was tone for a fresh set of wheels; the Works he was running previously were naturally stunning, but Tobias is a guy who likes to do things a bit differently and definitely likes to stand out from the crowd. His set of Works, rare and lovely as they might be, weren’t quite doing it for him as they once did. “I wanted something special and uncommon, and then I started thinking about rebuilding an OEM set of BMW wheels,” he says. “I love five-spoke wheels so I think the “Throwing Stars’ were the best option,” and we’re not going to argue with him there. The E34 M5 Style 21 M System II wheels, aka ‘Throwing Stars,’ are stunning and work well on just about every BM, even though they’re not often seen on Sevens, which means they were the perfect choice for Tobias and this build. Of course, as stock 17s they would have been lost under the Seven’s mighty arches, especially when aired-out, so Tobias has had them turned into custom three-piece splits measuring 10×19” up front and 11×19” at the rear with some seriously aggressive offsets, and now they are truly fit for this build. Both the fronts and the rears have some serious dish on those stepped lips, which reflect the dazzling gold hardware, while the centres have been finished in matt grey, offering the perfect contrast. The 7 Series swallows these serious wheels with no effort when Tobias drops it on the ground, aided by adjustable camber/toe arms at the rear that have allowed -10° of camber to be dialled-in, and the end result is seriously dramatic, with the Seven resting its belly on the tarmac and it looks awesome.

While the wheels and air play a big part in making this 7 Series look as good as possible, there is plenty more going on here and Tobias has added a number of touches to ensure that the whole car delivers when it comes to visual impact. There’s an Alpina front lip spoiler, which gives the car a subtle yet muscular appearance, and he has also added a set of facelift side skirts, while at the rear the lower bumper section, which would normally be black, has been painted body-colour. Speaking of which, Tobias also treated his 7 Series to a full respray in its original shade of Canyon red and it looks fantastic for it, an unusual hue but one that really suits the car and looks awesome against the colour combo of his wheels. There’s also a fresh set of headlights and facelift rears along with a set of uprated brakes, and then there’s all the stuff that you can’t see but which ensures this car drives as well as it looks, like the complete set of fresh front-end bushes and arms that have been fitted, along with all-new rear bushes as well. Inside, meanwhile, Tobias has chosen to leave thing OE, and you can’t really blame him because the E38 interior is a seriously nice place to spend some time, but he has added an E39 Sport steering wheel in place of the horrible four- spoke stock item, and the already uprated audio has been further enhanced with a set of aftermarket speakers all-round for the finishing touch.

In the space of just over a year-and- a-half, Tobias has taken an unassuming stock 7 Series and transformed it into a stunning show-stopper that really stands out from the crowd. The air and those stunning custom splits undoubtedly steal the show, but Tobias has paid plenty of attention to the smaller details and it all comes together beautifully to create the sort of 7 Series any of us would be proud to own and show. With no further plans for the car on the horizon (at least for now), the 7 Series is finished for the tone being and that’s a good thing because remember that E30 we mentioned that he also owns? Yeah, that’s next in the queue for a complete overhaul; “My 320i two-door is standing and waiting, so I will be starting on that in the near future. It will be completely redone from the ground up, with Air Lift, of course, and an all- new drivetrain and much more,” he grins and it sounds like it’s going to be another seriously nice build – going by this Seven, it’s not going to disappoint. The E38, though, is going nowhere because now Tobias can enjoy the fruits of his labours, and they don’t come much sweeter than a seriously slick air-ride Seven.

THANKS I would like to thank my girlfriend Linnea for painting the car, and a special thanks to Jonte, Johan, Thomas, and Joakim for their help through the years