A widely-agreed rule of magazine features is that rims and air-ride do not a feature car make. Anyone with sufficiently favourable credit can get themselves a shiny new 1 Series on finance (or Golf, or Civic, whatever your scene is), then whack some wheels and fancy suspension on the plastic and the job’s a good ’un. That makes a cool car, but not a feature car. However, when the machine in question is something as cool as Jesse Sipola’s E3, conventional wisdom sails right out of the window. This eye-popping vision in retro three-box purity has unfettered licence to write its own rules, by virtue of the fact that… well, just look at the damn thing. It’s so cool it’s ruined the local climate around Jesse’s hometown of Iitanpolku, southern Finland. There are penguins roosting in the trees. The coffee machines in Starbucks have started dispensing Mr Whippy. 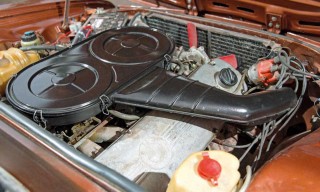 “I’ve been interested in BMWs since I got my driver’s license,” he explains. “Their design and performance are something that makes my heart say yes! My first car was an E36 318iS Coupé, which was originally Hell red, but the paint was in bad shape so my dad and I decided to paint it in candy red. I’ve had a few E36s – several coupés, and one convertible. Now I have this E3 as a daily driver, while my E36 325i Coupé 325i is being built.”

The E3 is undoubtedly a fi ne choice; for the uninitiated, here’s a capsule history lesson… In the late-1950s/early-1960s, BMW’s image needed a shot in the arm, to revitalise the brand as the microcar and motorcycle markets imploded. The Neue Klasse was the solution – debuting at the 1961 Frankfurt Motor Show, the fresh new BMW 1500 pioneered a set of values that have endured since; it had disc brakes and all-round independent suspension, offering the latest technological developments in a well-equipped car that, while selling at a premium price, wasn’t absurdly out of the reach of the man on the street.

This evolved into the slippery 2000C/ CS Coupés and the iconic ’02 series and then, with an eye on beating Mercedes- Benz at the big-barge game, the New Six range appeared at the top end of the market. The poster boy for the New Six has always been the ‘Batmobile’ – the super-aerodynamic racy variant of the E9 3.0 Coupé, the CSL – but of course this mould-breaking range featured two body shapes: the E9 coupé and the E3 saloon. The Neue Klasse’s hardy M10 four-bangers were comprehensively reworked into the six-pot M30 range, and the New Six styling featured such details as the twin-headlights-in-grille and the celebrated Hofmeister Kink that have since become BMW staples. At launch, the E3 was available in either 2500 or 2800 flavour, and Jesse’s car is a later 3.0-litre model. 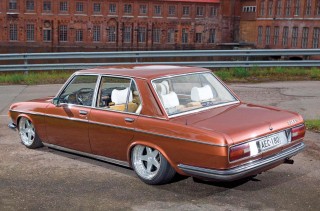 “My dad actually found the car for sale online,” Jesse explains. “He told me he’d found an interesting BMW on sale in northern Finland and that I should check it out; I quickly contacted the seller and made a deal – I hadn’t seen one before, and I had to have it! It was in pretty good shape overall; it had been stored in a barn for eight years and the owner had done a lot of rust removal and sheet metal work. I still knew that I had a lot of work ahead if I’d want that car on the road though!”

Fortunately Jesse is a clear thinker, a man of purpose. His plan for the E3 was mapped out from the get-go – to get it running, make it roadworthy, then make it ridiculously low. Sentiments that we salute with vigour.

“After the car was brought to my parents’ garage, I started the build by fixing the brakes,” he continues. “Some parts took a while to be found which did delay the project. But after the brakes were done, the car ended up sitting for a year and a half in a small garage, waiting for time, money, room and motivation. Then suddenly, after last winter, my friends encouraged me to order an air-ride setup for my E3, so that’s what I did! Soon the large garage was empty and ready to take the E3 in, and then it took just two months until the car was painted and bagged.”

The priority on lows remained constant, with that trusty Big Six staying stock and in situ, although Jesse assures us that the twin Zenith carbs will be swapped out for triple Webers in due course. The interior’s all original too – it needed little more than a good wash, so why change anything? 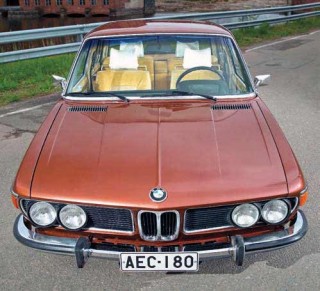 As simple as he makes the suspension sound, however, it wasn’t actually just a case of ‘ordering an air-ride setup’ – it’s not as if these cars are common, you don’t just pluck a kit off the shelf and bolt it in. The solution here was to run with universal Air Lift struts, then painstakingly engineer them to fit the car’s MacPherson front and Chapman rear setup. The results speak for themselves though, don’t they?

And, of course, wheel choice was crucial. That’s how the game is played. “At first I was planning to fit a set of 16” ATS wheels I bought online,” says Jesse. “They’re pretty rare – I’ve seen one other set on an Opel, but not as wide as mine. But instead I decided to go with these 17” Cromodora wheels; they used to be on my old E36 project, and when I testfitted them on the E3 they looked kinda good! Some people say they’re too big for a classic BMW, and maybe they’re right… but hey, I can always swap to the ATS wheels another day.”

Jesse’s keen to point out that he’s still tweaking and refining the setup, that this is V1 of an evolving suspension system. “My friends are all in the stance scene, so the direction of this car was always clear,” he says. “My dad and I built it up with the American Car Show in Helsinki as our deadline, but this is just the first version. I’m planning to own this car for many, many years – to make it a good one! I want to make it ride as well as it can.”

He’s certainly got off to a flying start, that’s for sure. It may have taken around two-and-a-half years to go from acquisition to what you see now, but the actual bulk of the work was dispatched in a few short weeks – and with his mojo now neatly ticking over, you can be sure that the pace will pick up with alacrity. The E3’s second outing, to the Turku AutoSaloon show, netted it a trophy in the ‘Best Stance’ category, and it’s pretty obvious why. Just look at the way it sits when it’s aired out. It’s totally on-point. 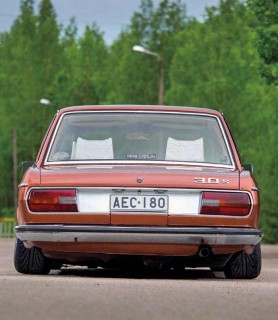 The elephant in the room, of course, is that it’s brown. It wasn’t all that long ago that this would have been chalked up as a negative, but the tide of perspective has once again turned – muddy hues were big in the 1970s, and they’re bang on-trend right now. Rightly so too, as the big BMW looks spectacular. A rich, chocolatey slab of deliciousness, all hunkered down and ready to rumble. Yes, this may be a rims-and- air build, but that’s all it needs to be – anything else would dilute its purity. We love this E3 just as it is.

“I decided to go with these 17” Cromodora wheels; they used to be on my old E36 project, and when I testfitted them on the E3 they looked kinda good!” 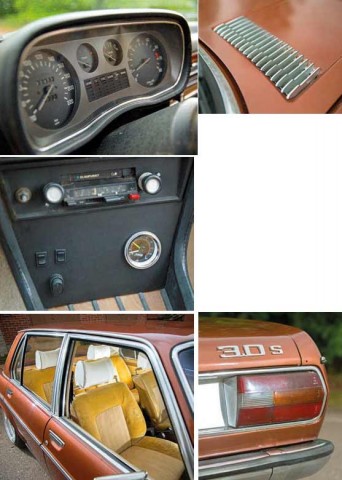 3.0-litre twincarb straight-six standard for now. You really can’t get much lower than that… Original interior is very cool. Viair pressure gauge for air-ride.