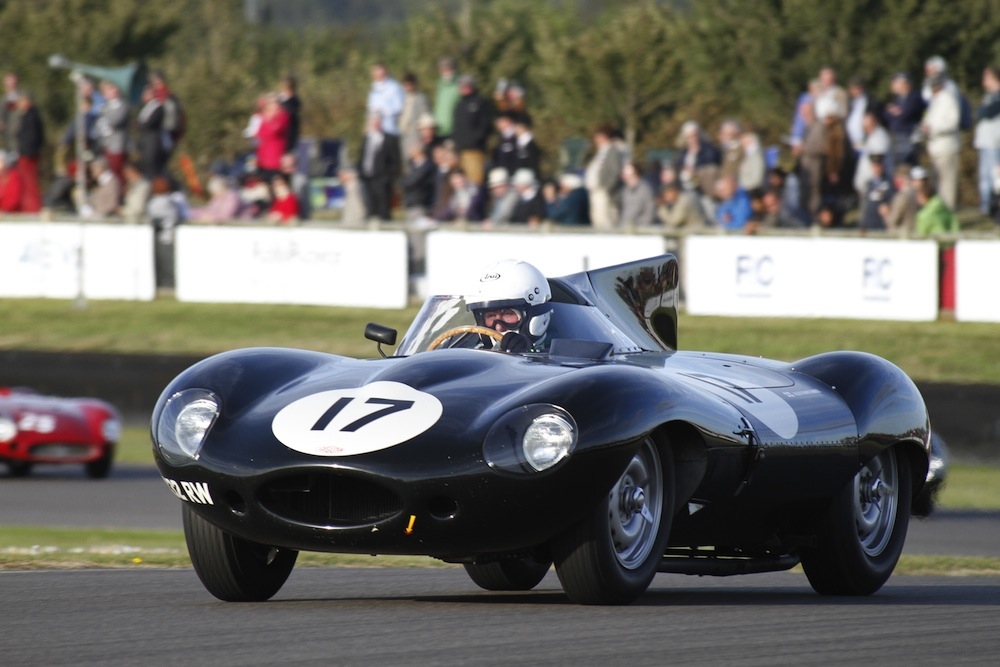 The mouth-watering spectacle – unlikely ever to be repeated – of a full grid of Jaguar D-types being raced in anger for the Lavant Cup was one of the highlights of three mesmerising days at the Goodwood Revival from 12-14 September 2014. Gary Pearson – the event’s most successful driver – was on pole, ahead of Christian Gliisel and John Young, who scorched into second from the start but spun on the first lap. “I thought I was the last of the late brakers,” said winner Pearson, “but John left it even later.” Young recovered to finish fifth.

Fireworks were expected in the meeting’s other special race – marking 50 years of the Ford Mustang – as 30 American tintops contested the Shelby Cup. Rob Hall had the edge early on, after putting Martin Melling’s Falcon Sprint on pole, but was hounded in a four-car train by Mat Jackson’s Mustang, Roger Wills’ Mercury Comet Cyclone and Mike Gardiner’s Falcon. 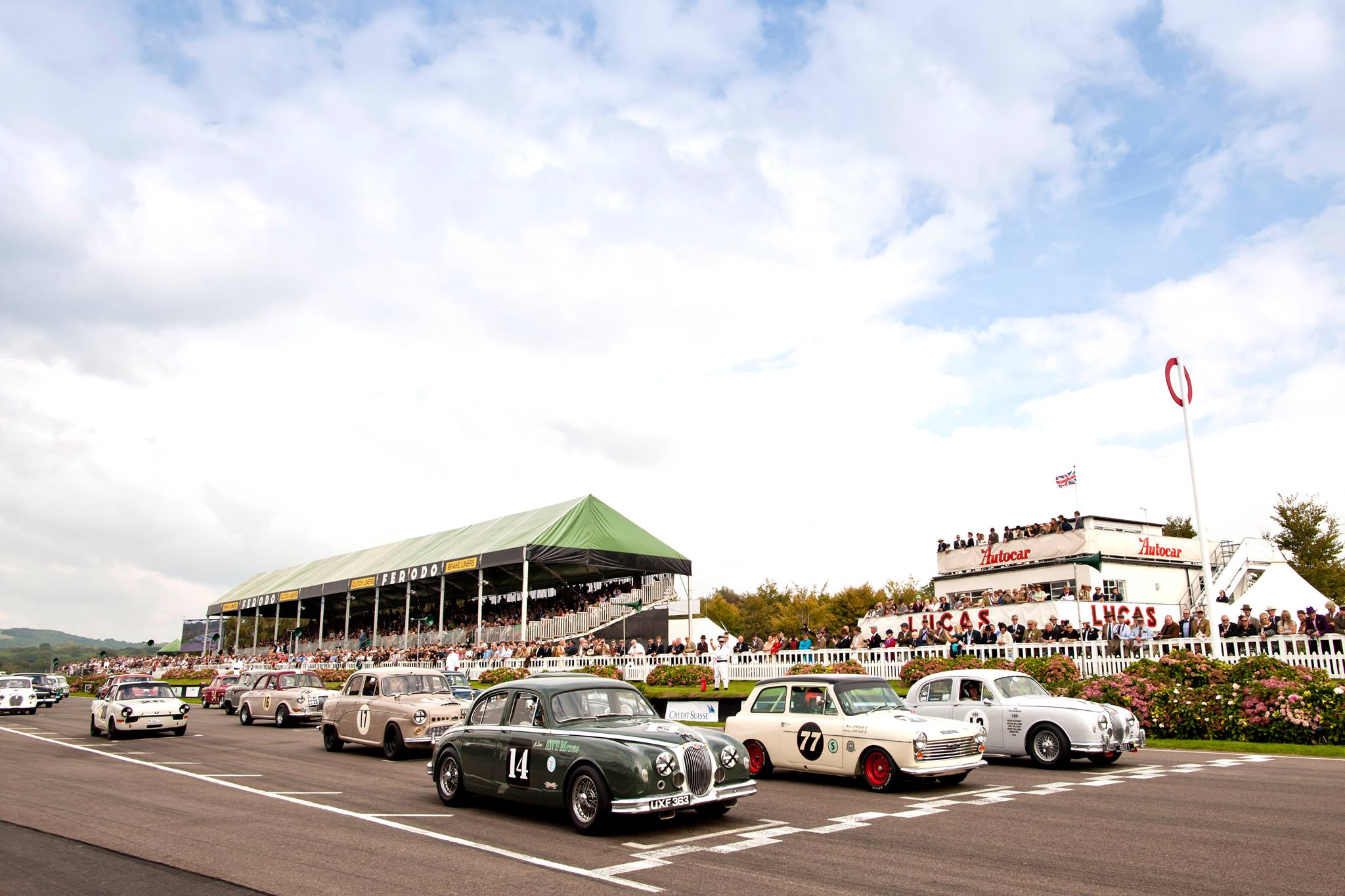 A mid-field shunt that brought out the safety car prompted most of the grid to swap drivers. Pandemonium ensued, from which Gardiner’s partner Niki Faulkner eventually emerged with a clear advantage. Henry Mann did his late father Alan proud, with a storming drive to take second. Had it not been for the pits gridlock he might have reeled in the winning Falcon of Gardiner and Faulkner, while Emanuele Pirro in Wills’ Mercury pinched third from Jason Minshaw, who’d taken over from Hall.

Minshaw’s older brother Jon and Phil Keen had fared better on Friday evening, with a magnificent performance to win the two-driver, one-hour Sussex Trophy with their Lister-Jaguar ‘Knobbly’. The evocative sunset brought back memories of the venue’s epic Nine Hours races as the sports-racer howled to victory with Bobby Verdon-Roe giving chase, effortlessly drifting the Ferrari 246S Dino (started by Harry Leventis) around the circuit’s fabulous open sweepers.

As always, though, the crowd – a record 148,000 sell-out-reserved its biggest cheers for the St Mary’s Trophy, this year for ’50s saloons. A roster of motor-racing greats – including Stuart Graham, Derek Bell and Pirro – contested Part 1. BTCC holder Andrew Jordan had put dad Mike’s Austin A40 on pole, fractionally ahead of former British GT champ Darren Turner’s similar car, with the MkI Jaguar of 2012 victor Anthony Reid third-fastest.

Wily Scot Reid bided his time while the two Austins fought for the lead and Pirro was on a mission in Geoff Gordon’s Alfa Giulietta Ti. He cheekily nabbed second, nipping between the two Austins, but Reid took the lead by about half distance and didn’t relinquish it – although Pirro kept him honest all the way, ahead of Jordan.

It was just as close in Part 2. Justin Law took over from Reid, with a 1.748 secs cushion on Jordan Snr. Law looked to have it in the bag until his famous ex-Albert Betts MkI stuttered on the Lavant Straight, allowing Jordan to slip past and claim the win, although he lost out overall by less than half a second to the Jaguar. “I can’t remember enjoying anything so much for ages – not since Andy won the title last year,” said Jordan.

Historic Formula Junior regulars Sam Wilson and Jon Milicevic were in the thick of it once more in the Chichester Cup. An epic dice ensued, the lead changing hands almost lap by lap. Veteran single-seater expert David Methley was in determined mood on home turf, however, storming back after a poor start from pole, and took the lead with a brilliant move through the kink past St Mary’s. “That was great fun – probably the last time I’ll be able to lead the youngsters,” said an overjoyed Methley.

Mark Gillies was in imperious form, too, taking a fourth victory in new owner Dick Skipworth’s ERA R3A in the Goodwood Trophy. Hill- climb specialist James Baxter got the jump at the start in R4D, so the mostly sideways Gillies needed all of his skill to find a way past. The ERAs were challenged by Calum Lockie in a Maserati 6CM, until Stephan Rettenmaier’s Alfa Tipo  B was flipped and the safety car appeared.

Gillies pulled clear after the restart, but Baxter retired, leaving Lockie second. “Those cars are awesome,” he said. “We were pulling 140mph down the straight.” Gillies added: “It was certainly exciting. I had the biggest moment in mv life on the oil at St Mary’s.”

Rolling thunder returned on Sunday, with a monstrously valuable grid of’60s GTs contesting an action-packed RAC TT Celebration. Ollie Bryant’s AC Cobra had pole, but Dutchman David Hart made die best start. Gary Pearson, Chris Beighton and Robin Liddell all spun at the Chicane, miraculously without contact, before a charging Ludovic Caron shot across the Madgwick gravel-trap and into the banking in his Cobra. Cue the safety car and pits chaos, part two.

Bryant took over the Cobra and pressured Hart’s partner – compatriot Giedo van der Garde – into a mistake. The current Sauber F1 test-driver soon got the hang of the AC and caught Bryant with a blistering sequence of laps before the leader’s V8 packed up on the penultimate lap. A chuffed van der Garde took the chequer and won the Rolex Driver of the lee ting for his sensational histories debut.

“When I started out in motor sport in 1979. I worked for Image Racecars, which was adjacent to Goodwood recalls former BTCC ace Reid. “I built the cars during the week and raced them at weekends. As soon as a customer’s car was finished, we pushed it through the fence and tested it on the circuit – with no marshals around or anything. The track has had some fresh tarmac since then, but it is basically the same. 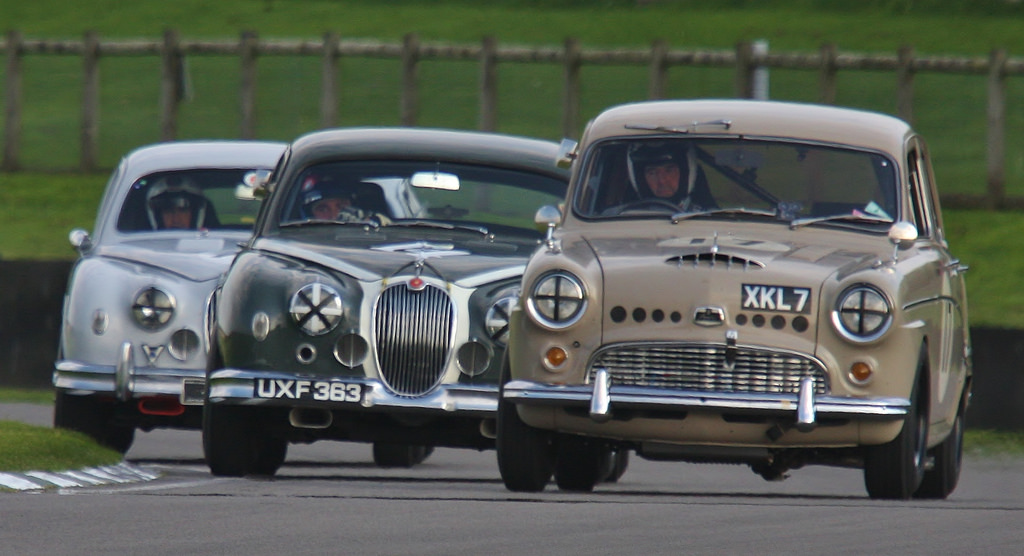 “As Jackie Stewart said, it’s all about getting yourself in the right car, and Don Law always gives me a fantastic car. We won two years ago but we knew the competition had moved forward, so we rebuilt the engine. The car hadn’t been on track but is road- registered, so Justin had been testing it on the M6 and around Stoke. I could tell that it was going to be good from the look on his face when he arrived here.

“That race was an absolute classic – very clean, very fair – between drivers with a real understanding, including Darren Turner, Emanuele Pirro, Andrew Jordan and myself.” 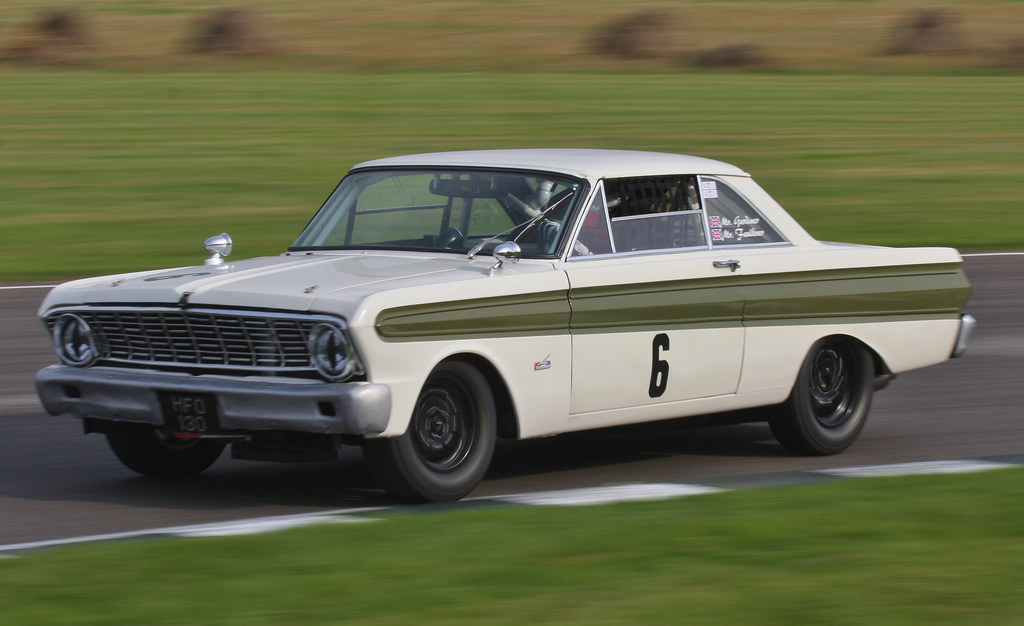 Gardiner/Faulkner’s Falcon came out on top in the thunderous charge for the Shelby Cup.