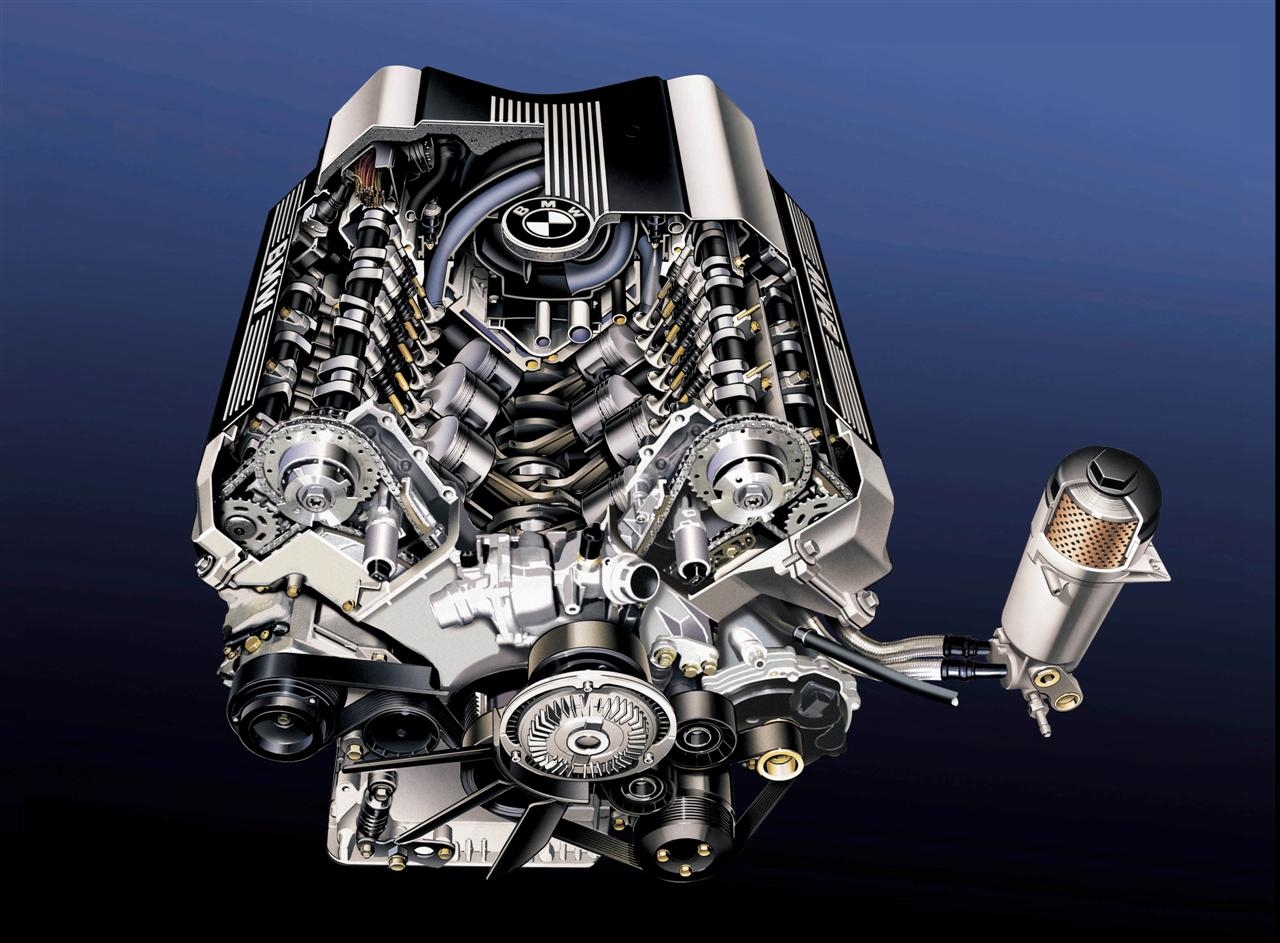 BMW may be best known for its straight sixes but V8s have been part of its engine lineup since 1951 and the M60 was the company’s first V8 in 27 years and was in production from 1992 to 1996 with no technical changes. The M60 came in two flavours – the 3.0-litre B30 and fourlitre B40, which were introduced at the same time. The former was used in the E32, E34 and E38 30i models while the larger engine was used in the 40i iterations along with the 840i. The M60B40 also appeared in the De Tomaso Guara sports car and was number one for two years running in the Ward’s Ten Best Engines list for 1995 and 1996.

The M60 was a 32-valve V8 with a 90-degree angle and used an all alloy construction, magnesium valve covers, nylon inlet manifold and plenum; dry weight for the engine differs according to source and is commonly quoted at 203kg, but 175kg actually seems like a more likely figure based on available information. The sintered con rods were made as a single-piece and then fractured to give a closer fit. The engine featured four valves per cylinder, with hydraulic lash adjustment and double overhead camshafts with a dual-row timing chain. Bosch Motronic 3.3 took care of fuel injection and ignition. BMW used Nikasil to harden the cylinder walls of the M60 though unfortunately this reacted with fuel with a high sulphur content, which ate away at the liners, causing loss of compression and, ultimately, engine failure. The B30 used an 83mm bore and 67.6mm stroke and a compression ratio of 10.5:1; the B40 had an 89mm bore and 80mm stroke with a slightly lower compression ratio of 10.0:1. The B30 developed 218hp at 5800rpm and 214lb ft of torque at 4500rpm, while the B40 produced 286hp at 5800rpm and 295lb ft of torque.

The M62 was designed with a number of requirements in mind which included reducing fuel consumption, offering greater levels of torque and making the engine quieter and smoother. To achieve this, BMW increased engine capacity, modified the crank drive and camshaft drive and further developed other engine components as well as employing digital motor electronics. For the M62, BMW switched to Alusil for the cylinders, solving the bore-wear issue, and gained piston cooling via hook-type nozzles, which were screwed directly into the bearing blocks, with the oil jet directed at the piston crown over the entire path of piston travel. The crankshaft was new due to the increased stroke of the M62 and was made from forged steel with a central hollow cavity to reduce weight, while the con rods were the same as those on the M60. The engine used a two-piece oil pan design, as found on the E38 M60, and an aluminium die-cast oil pump housing and cover, where the M60 used magnesium items and it also gained a thermal oil level sensor, as seen in the E38 M60. The head covers were made from magnesium while throughout the valve train the moved masses were reduced, with lighter hydraulic tappets, valve springs and upper valve spring retainer, with lower frictional torque and reduced noise. Early non-Vanos M62s used the same intake manifold as the M60, but the Vanos-equipped engine used a more restrictive manifold design. Bosch DME M5.2, as used on the M73, replaced the M3.3 of the M60. Compared with the M60, however, the M62 lost the duplex timing chains and the idler sprocket, these being replaced by a single timing chain and plastic chain guides.

For the E39-based Alpina B10 V8, Alpina had BMW cast a new block with the changes needed to bring capacity to 4.6 litres. Alpina then added a new crankshaft, more aggressive cams, hand-fettled ports and lighter, higher compression Mahle pistons, which resulted in 340hp and 347lb ft at 3800rpm. With Vanos on board, the engine developed 347hp and 354lb ft, the same as in the X5 4.6iS. For the V8S, Alpina kept the same bore of 93mm but used a new crankshaft to increase stroke to 89mm, giving a new capacity of 4.8 litres. Among the additional changes were a reworked and improved intake system and new piston rings. Power rose to 375hp while torque swelled to 376lb ft at 3800rpm.

We’re going to be concentrating on the M60B40 and M62B44 here to help keep things simple. The main thing you need to know is that neither engine is particularly responsive to tuning, though slight gains can be had. On the software front, the M60B40 actually responds much better than the M62; it needs a traditional chip rather than a remap and the one to get comes from a man named Wolf (wokke_2000 on eBay). A quick online search will show you that his chips come recommended for the M60B30 and B40, and they generate significant gains. On the B40 you can expect around 326hp and 354lb ft of torque, and the chip also removes the speed limiter; for about £250, it’s a no-brainer. M62s can be remapped, but the gains are less significant – my old 840Ci saw a gain of around 15hp and 15lb ft, which may not be enough to make you want to part with £500 or so. If you own a Vanos-equipped car, a simple modification is to replace the inlet manifold with the one from the M60. You might notice a slight drop-off in low-end torque, but should definitely notice an increase in torque higher up the rev range and the engine should feel smoother and more eager to rev. 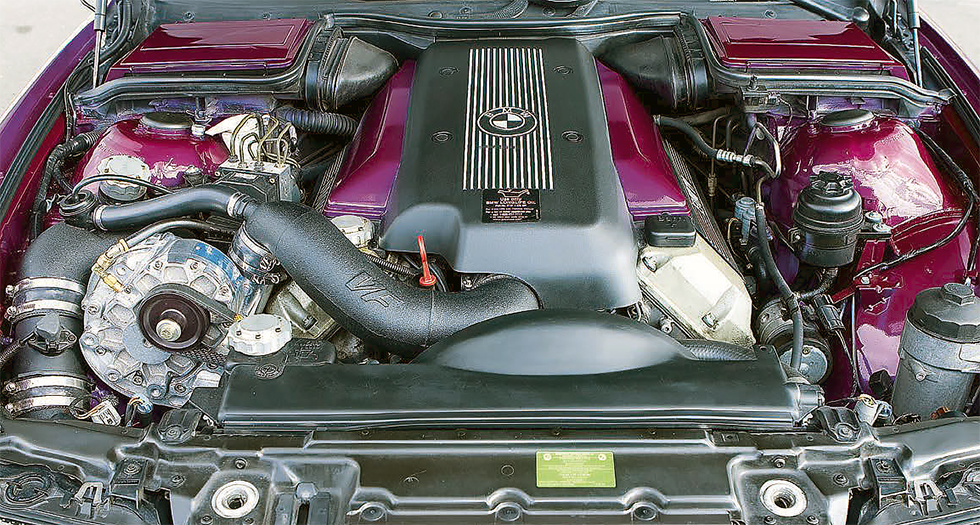 Cams are not something we’d recommend – the M60 and M62 offer good low-end torque and while cams will give more top-end power, they will also change the character of the engine and that might not suit everyone.  Exhaust manifolds are worth looking at though – the stock ones are very restrictive and BMW didn’t do much with them on the S62, which is why fitting aftermarket exhaust manifolds yields such significant gains on the E39 M5. Something like Evolve’s Medusa headers would do the job – they’re not cheap and, while they would fit on the engine side, they are longer than the stock items so some exhaust modifications would be required. It’s probably not worth it if you’re being sensible, but it can certainly be done.

The best way to get real gains from the M62B44 is to go for a supercharger. The only off-the-shelf kit available is a centrifugal one, or rather a kit does exist, and is available via eBay, that utilises an Eaton M112 blower and is based on the old Jaguar XJR/XKR setup, but the few people that have purchased one have been less than complimentary about it, so we’d stick with the tried-and-tested option. The only kit currently available comes from VF Engineering and uses a Vortech V3-SI trim centrifugal supercharger running at 6PSi; the kit also includes a K&N induction kit, high capacity fuel injectors and everything necessary to install the supercharger. Installation time is quoted as around eight hours and everything is reversible. The non-Vanos engine makes 410hp and 395lb ft of torque while the later engine produces 415hp and 400lb ft. The kit costs $6000.